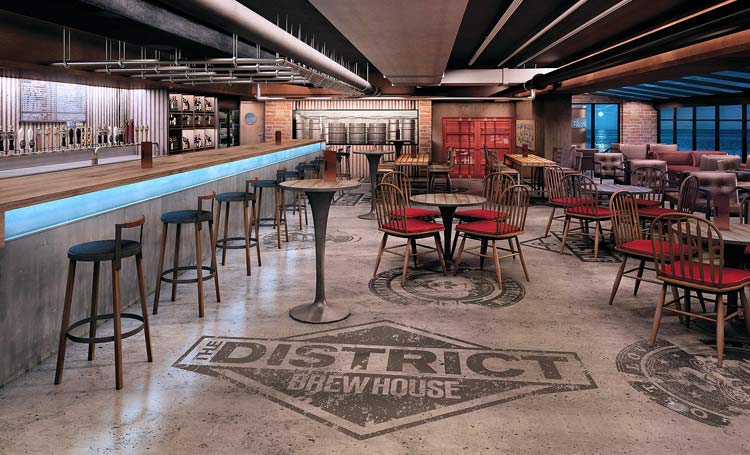 When people think of having drinks on a cruise ship, a lot of folks probably picture passengers quaffing fruity drinks with little umbrellas.

But that's far from your only choice. When I'm on a cruise and it's time to kick back with a drink, I'm looking for a good brewski, not some watered-down light beer or beer with a floating lime. I want some real, honest-to-goodness beer.

Luckily, I'm not alone, as evidenced by the growing number of cruise ship bars with quality suds and often a wide-ranging beer menu — many featuring craft and specialty beers from all over the globe.

So here's our rundown of the 5 best cruise ship bars for beer lovers. 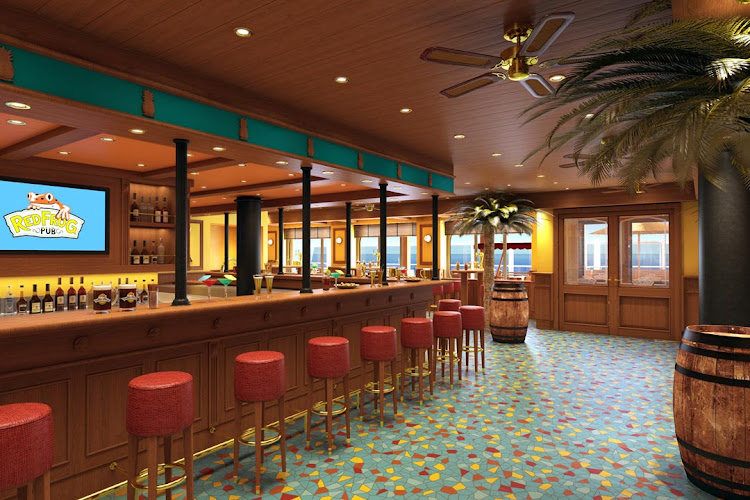 Courtesy of Carnival Cruise LineA look at Redfrog Pub and Brewery on Carnival Vista. It's the first brewery on a cruise ship.

Redfrog Pub and Brewery, which debuted in April on Carnival Vista, is the first brewery at sea. The RedFrog Pub brand can be found on plenty of other Carnival ships, where you can enjoy the signature ThirstyFrog Red, a red/ambler ale on draft. But Vista goes well beyond that with the first brewery at sea, featuring microbrews made in house and a nice selection of beers from around the Caribbean, including frosty brews from Jamaica, the Bahamas and Mexico. The menu also includes some signature cocktails to give you plenty of options. The pub also offers a wide range of pub grub, so you'll be able to refuel the tank when you challenge your pals to a friendly game of darts or Foosball. 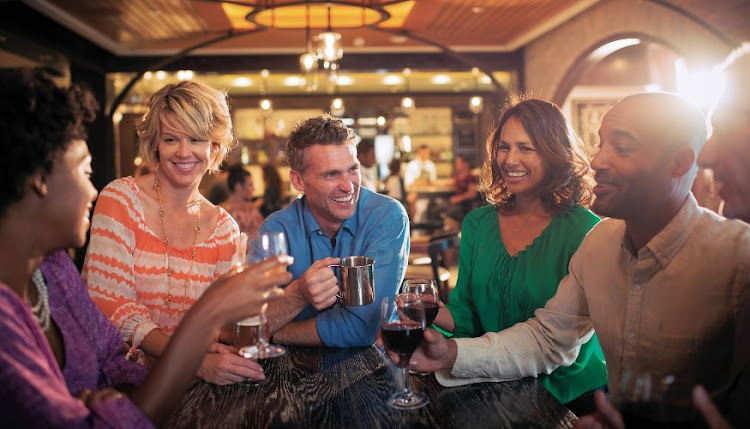 Troy House / Celebrity CruisesThe Gastrobar offers a menu with 40 handcrafted boutique beers. It debuted on Celebrity Equinox and will roll out to other Celebrity ships.

Who says that a beer joint can’t be a bit sophisticated? On Celebrity Cruises’ Equinox, this premium cruise line has stepped it up a notch when it comes to serving specialty beers. Here, you have a selection of 40 different beers, from ales and stouts to lagers and pilsners. The Gastrobar serves up top-notch craft beers from all around the world including Germany, the United Kingdom, Belgium, Ireland and both coasts of the United States. Gourmet comfort pub food can also be had at the Gastrobar with à la carte pricing at $3 for appetizers and $5 for flatbreads and sandwiches. If wine is your thing, Gastrobar also offers an impressive selection by the glass or bottle. You may need to take one of the ship’s extensive selection of 10 or 11 Caribbean or Mediterranean itineraries to fit in all of the libations offered. With inviting entertainment and great music, Gastrobar offers an atmosphere of casual sophistication. 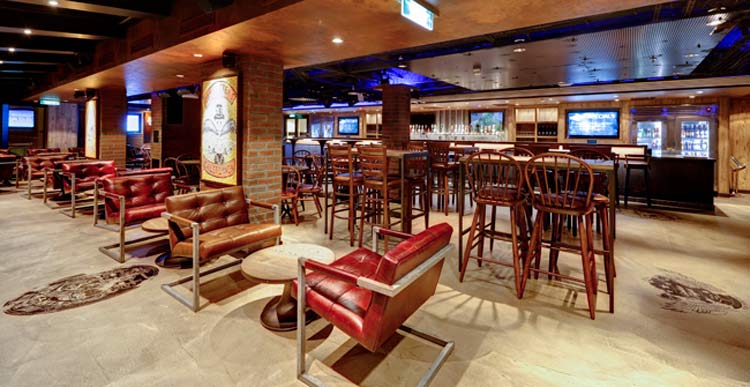 Debuting on the new ship Norwegian Escape, the District Brewhouse offers more than 70 different brews, including 24 craft beers on tap. The beer list includes a who’s who of well-known brands as well as featured craft beers from Miami-based Wynwood Brewing Co., exclusively on Escape. Or order an international specialty cocktail from Bar Lab. This sophisticated pub showcases live music and other events. Head to the photo booth with your sweetie for some candids, then sing or dance a little if you're in the mood. The District Brewhouse is one of 21 bars and lounges on Norwegian Escape. 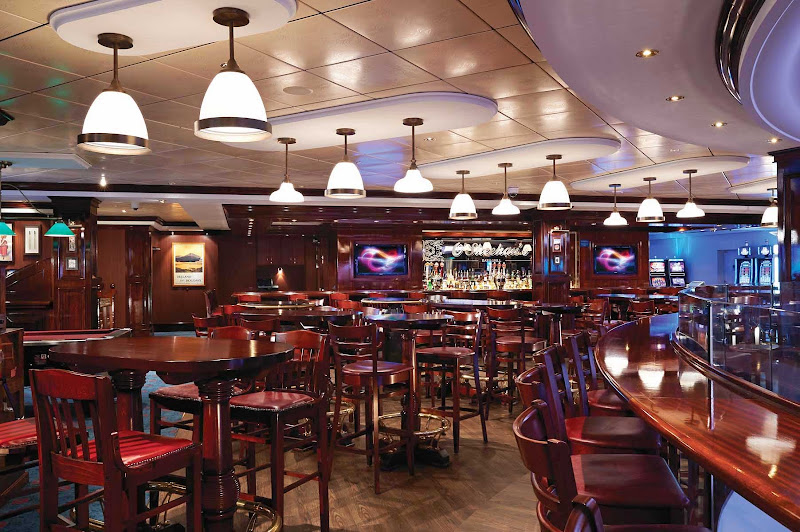 Courtesy of Norwegian Cruise LineHead to O'Sheehan's on Norwegian Getaway if you're looking for American comfort food, a cool beer or just a cozy place to hang out.

Here's another winner on Norwegian Cruise Line: O’Sheehan’s Neighborhood Bar & Grill. A quintessential American-style Irish pub, O’Sheehan’s is now a staple on mega-ships Norwegian Breakaway, Norwegian Getaway, Norwegian Epic as well as Norwegian Escape. One of the best cruise ship bars for beer lovers, O’Sheehan’s offers eight beers on tap and more than two dozen overall from which to choose. With plenty of domestic and imported beers, such as Guinness and Newcastle, there are plenty of brews available if you come back on a second or third night. Not to mention, O’Sheehan’s serves food, including breakfast all day and other pub grub like fish and chips and chicken pot pie. So, you may never find a reason to leave O’Sheehan’s. 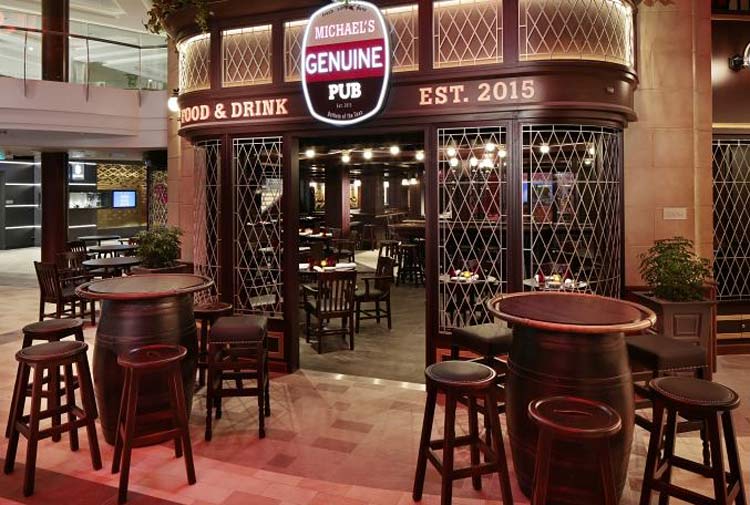 Courtesy of Royal Caribbean InternationalMichael's Genuine Pub on Anthem and Quantum of the Seas.

Michael’s Genuine Pub is a USA-centric gastropub can be found on Anthem of the Seas' sailings to the Caribbean, as well as on Quantum of the Seas in the Far East and Australia. Michael’s is the creation of celebrity chef Michael Schwartz. The homemade brew on the ship, Michael’s Homebrew, is a classic American ale that reminded me of a slightly heavier and more flavorful Budweiser. With 15 beers from which to choose, and a nice collection of Indian pale ales and hearty signature cocktails, this pub is certainly one of the best cruise ship bars for beer fans. If you do get hungry, an appetizers menu (starting at $4 a plate) is also available. So, kick back, munch on some snacks, and drink the afternoon away with some of your sea buddies.

How about you? Do you have a favorite bar on a cruise ship?