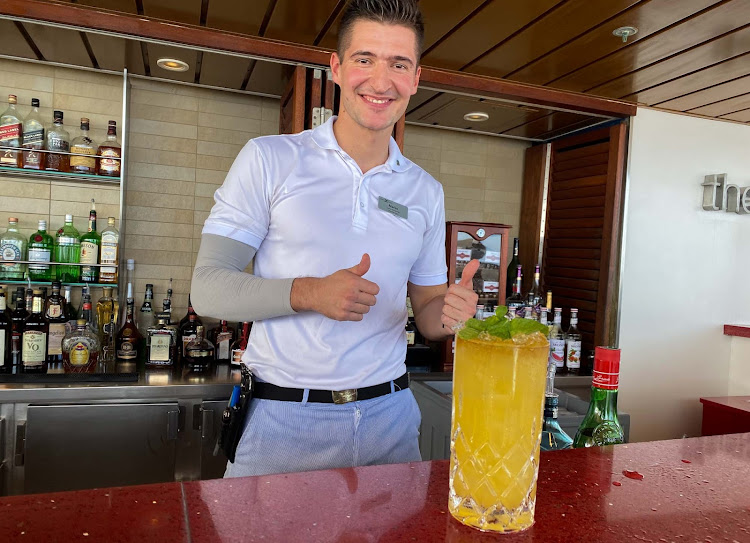 Mixologist Marko Ivanovic with the Fog Cutter at the Sunset Bar on Celebrity Equinox.

On my Caribbean sailing aboard Celebrity Equinox that ended last week, I had the chance to interview two of the ship's top mixologists — both of whom whipped up some of their favorite tiki cocktail recipes for Cruiseable's readers.  (To confess: They whipped up the drinks, not just the recipes!)

At the Sunset Bar on the 15th deck — probably our favorite venue on the ship — Marko Ivanovic of Montenegro crafted two classic tiki drinks as the ship returned from its sunny sojourn to Aruba, Bonaire and Curacao. So here are two great tiki cocktail recipes to help you cool off during a tropical getaway ... or anytime. 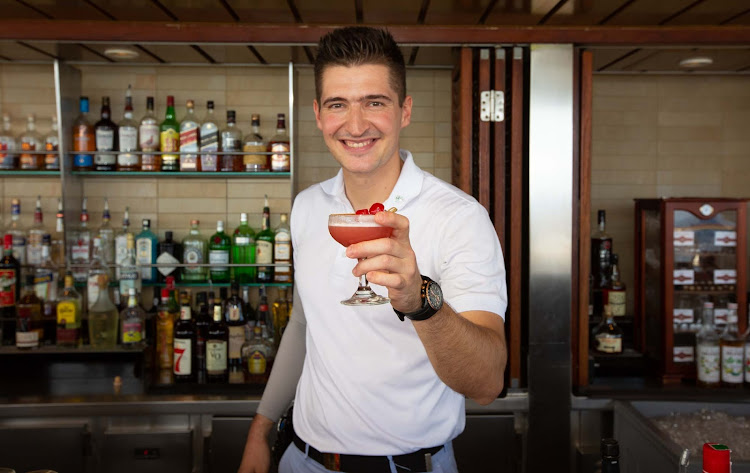 Named after Canadian-American film actress Mary Pickford, the drink is said to have been created for her in the 1920s by either Eddie Woelke or Fred Kaufmann at the Hotel Nacional de Cuba on a trip she took to Havana with Charlie Chaplin and Douglas Fairbanks. It's light and refreshing — the perfect tiki cocktail for the tropics (or fantasizing that you're on a cruise in the tropics).

Now, the Mary Pickford is a classic, but Ivanovic added a little twist. Two, actually. Instead of regular grenadine, he used a homemade raspberry syrup. And the Bacardi Superior light rum he infused with pineapple. After all, when in the tropics ... Enjoy! 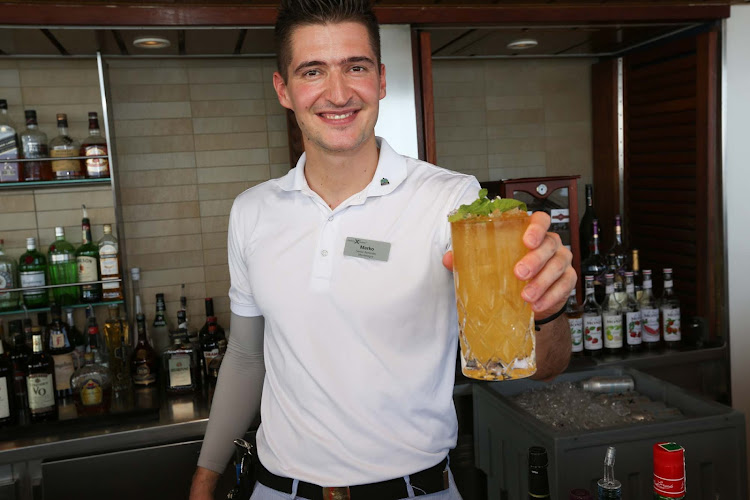 JD Lasica / Special to CruiseableMarko Ivanovic with the potent but refreshing Fog Cutter.

Want to forget your cares in a flash? Victor Bergeron, Jr., founder of the Trader Vic chain, concoted the Fog Cutter in 1947 as a sort of lemonade with attitude. “Fog Cutter, hell,” he reportedly said. “After two of these, you won't even see stuff.” Tall, easy to drink, bright and refreshing, the Fog Cutter is a mood lifter for a hot afternoon. Just remember to pace yourself because it has the potency of a Long Island ice tea.

“It's just a layer of citrus under a lot of booze, and you're not going to feel anything. Think of it as a tasty afternoon mood lifter," Ivanovic said.