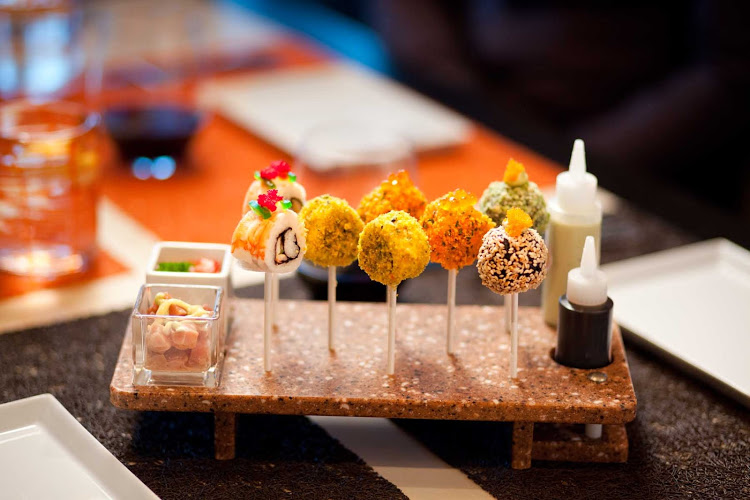 Qsine's fresh sushi with a delicate garnish of caviar on Celebrity Silhouette will whet your appetite for these 10 top cruise ship restaurants.

Dining on cruise ships today often is on par with some of the best land-based restaurants — a big change from just a decade ago. “We want people to remember the experience and come back for more” seems to be the mindset of today’s cruise lines.

I have curated a list of  some of the better dining experiences that I've enjoyed on cruises over the years or that have come to my attention. Typically, you'll find the best fare at sea in a specialty restaurant, with a price tag that runs from free (on an all-inclusive cruise) to as much as $100 or so per person.

The list below begins with a big surprise. Please keep in mind that food is personal and not all culinary critics think alike! Use Cruiseable's Bliss Filters at the right — set at 10 for Dining experience — to discover your own culinary bliss. 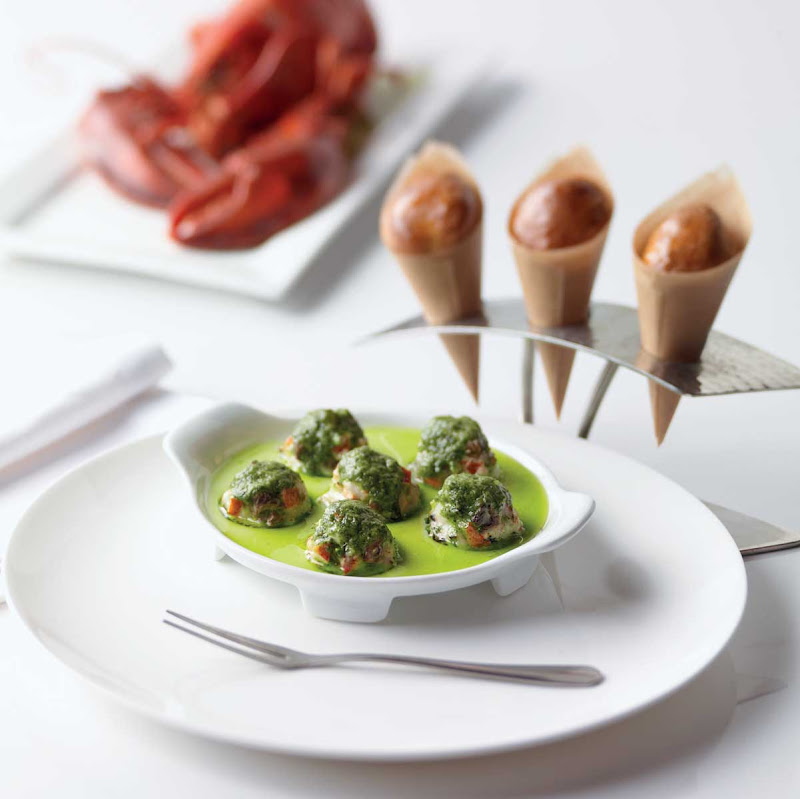 It's safe to say that among the hundreds of restaurants found on cruise ships, few, if any, can compete for originality with Celebrity Cruises’ Qsine, one of two specialty dining venues on Celebrity Millennium, the other being the very proper French high-style Olympic presided over by the charming Bekir Ileri. 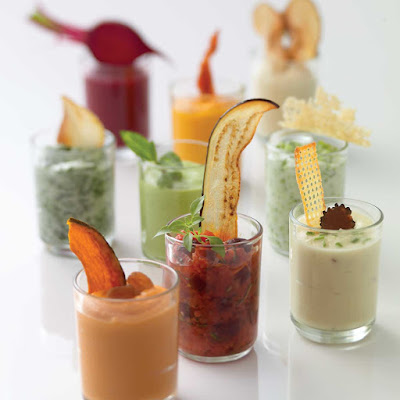 Everything is different at Qsine from its fine, thin-walled wine tumblers placed just so on their sides when you sit down to iPads provided for you to order your meal. Cast aside preconceived notions of what fine dining should be and just submit to the fun and the food.

The menu consists of 20 individual small-plate dishes, so you put together something like a self-directed tasting menu that is presided over by your server. Dishes are drawn from multiple cuisines and mixed and matched in intriguing ways. Each course has its own presentation eccentricity. For instance, the Vegetable Du Jatour is a half dozen small glass jars, each filled with a different purred vegetable and eaten with small spoons. Slider Party consists of two little patties topped with cheddar presented still sizzling on the cast iron and accompanied by little brioche buns and condiments. Another course is offered in what looks like a shadow box with many compartments. The dessert menu is on a Rubic’s Cube-like device. Plenty quirky, but fun and satisfying. 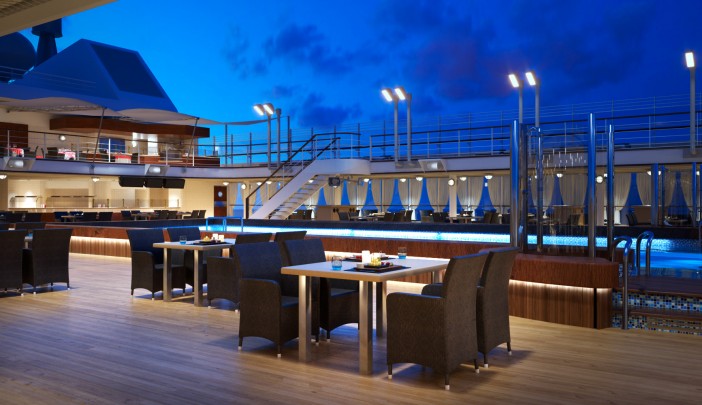 Courtesy of SilverseaDine al fresco at Hot Rocks on the pool deck of Silversea ships for meals cooked to your preference.

You probably wouldn’t expect me pick a casual al fresco deck restaurant as one of the tops, but Hot Rocks from luxury line Silversea really is. Nowhere at sea can you get a better steak or veal chop or fish that cooks right on top of your table in a romantic open-air setting scented by sea air and cooled by ocean breezes. The lava stone cooking technique (dinner only) also happens to be healthy. Another bonus: the wine is free. 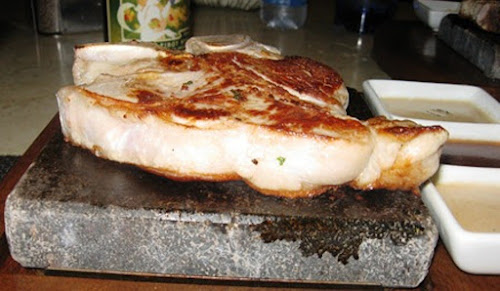 Patti Pietschmann / Special to CruiseableHere's a perfect veal chop I cooked on my table on Silver Shadow.

Ships: The entire fleet. Hot Rocks will be a staple of Silver Muse, launching in April 2017; on all other ships, it's called The Grill, but passengers informally refer to it as Hot Rocks. 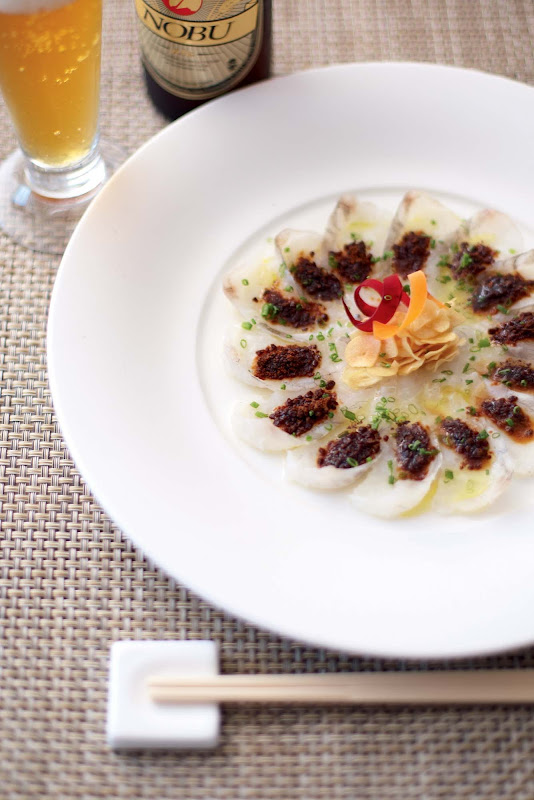 David Martinez / Courtesy of Crystal CruisesTry the Nobu Miso on Snapper for a dish you won't forget on Crystal Serenity.

Silk Road and Prego, which offer both traditional and modern cuisine, tie for tops on the swank luxury ships Crystal Serenity and Crystal Symphony. Before you get started, warm up your taste buds at the Sushi Bar, which adjoins Silk Road. You'll find an assortment of inventive sushi and sashimi from master chef Nobuyuki (Nobu) Matsuhisa — he actually climbs on board from time to check it out. Hightlights include salmon tartar, Tiradito Nobu-style and yellowtail sashimi with jalapeño.

For a full epicurean experience, Nobu's Silk Road is as good as Asian fusion food gets. Top entrees include lobster with truffle-yuzu sauce, grilled Wagyu beef rib-eye (just amazing!) with Wasabi pepper sauce, and his signature dessert, a bento box filled with chocolate soufflé cake with Shiso syrup and sesame ice cream. Fresh dishes are prepared from fish picked up in local ports.

On another evening, head to Prego, one of the best Italian restaurants at sea, modeled after chef Piero Selvaggio’s top-ranked Italian restaurant Valentino in LA and Las Vegas. Everything about it is exceptional from the romantic setting to the cuisine: antipastos, freshly made pasta and tender, juicy veal chops. Wines also flow freely at both restaurants and throughout the ship. Other Prego highlilghts include carpaccio, parma ham, pan fried Branzino and veal rib eye.

Cost for both: Complimentary for first meal, then $30 per person for subsequent meals. 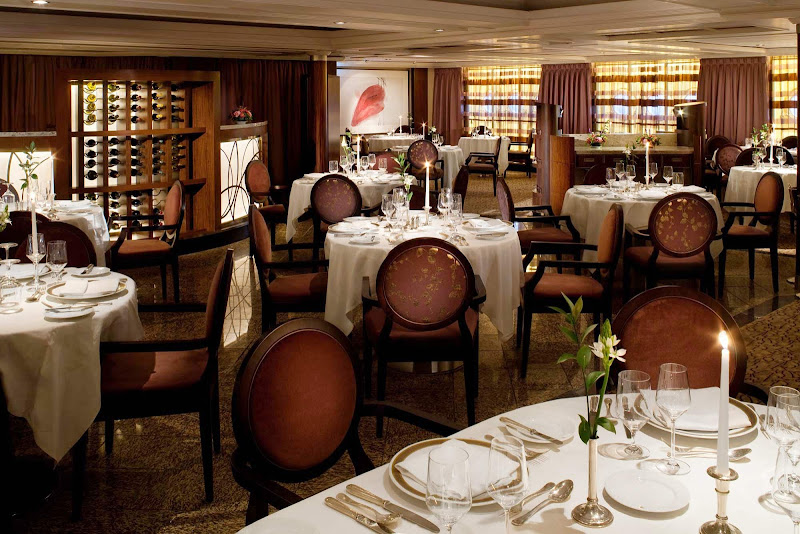 Courtesy of Seabourn Cruise LineSeabourn's The Restaurant features a wide variety of dishes prepared to your order by veteran chefs.

Every restaurant on Seabourn's luxury fleet is fabulous and seems to get better every time we go on board. The freshly prepared cuisine bursts with authentic regional flavors. Especially memorable was a succulent fish entree during a recent Amazon cruise. The Restaurant, the classy main dining venue on board, features innovative dishes like grilled double-cut lamb chops and lobster roll with yogurt caviar sauce, meals served à la minute, from galley to table, and a grand finale of house-made ice cream bonbons on wooden sticks. The tasting menu of small, creative, modern dishes at Restaurant 2, such as duck confit wrapped in phylo dough, is equally impressive.

Seabourn is a member of Chaîne des Rôtisseurs, one of the world’s most prestigious gastronomic societies devoted to the art of fine dining. The line recently teamed up with celebrity chef Thomas Keller, the culinary genius behind a trio of Michelin-starred restaurants: The French Laundry, Per Se and Bouchon. Chef Keller is developing an array of dishes, ranging from appetizers to entrees to desserts, that is now being rolled out across the Seabourn fleet.

Cost: Both restaurants are complimentary. 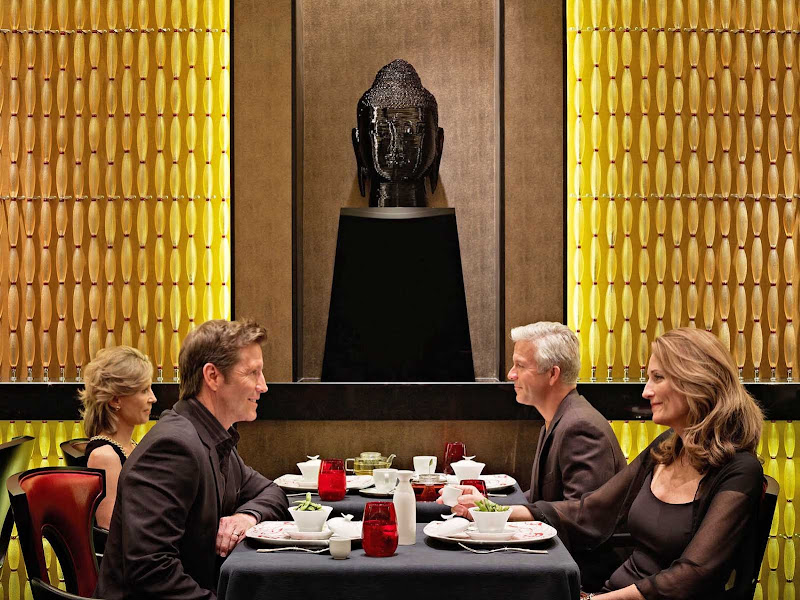 Courtesy of Oceania CruisesThe striking interiors of Oceania Riviera's Red Ginger restaurant is the perfect backdrop while you experience its contemporary Asian cusine.

Oceania's dreamy ultra-premium ships Marina and Riviera dish out top-quality cuisine no matter which restaurant you choose. In fact, nearly everything we ate on this ship was amazing. (After all, the cruise line boasts about "the finest cuisine at sea.") It is one of the few ships where we found the fruit to be perfectly ripe — so often ships put out hard melon or papaya but not so on food-centric Oceania ships. The cheeses are also perfectly ripened and every dish you order is cooked to perfection.

You have a choice of culinary delights during your journey. My favorite is Red Ginger, the elegantly outfitted culinary masterpiece with contemporary pan-Asian fare. Sample from the sake list then move on to delicacies such as Thai tom kha gai soup or a spicy watermelon and duck salad.

Cost: Red Ginger and Jacques are complimentary. Reservations are required.

To explore epicurean delights in a more private setting, both ships offer La Reserve, a communal setting for a maximum of 24 gourmets with private vintage wines and 7-course wine-pairing dinners. Cost: $95 plus 18% gratuity. Another dining venue on board, Privée, charges $1,000 for a private venue and up to eight guests. 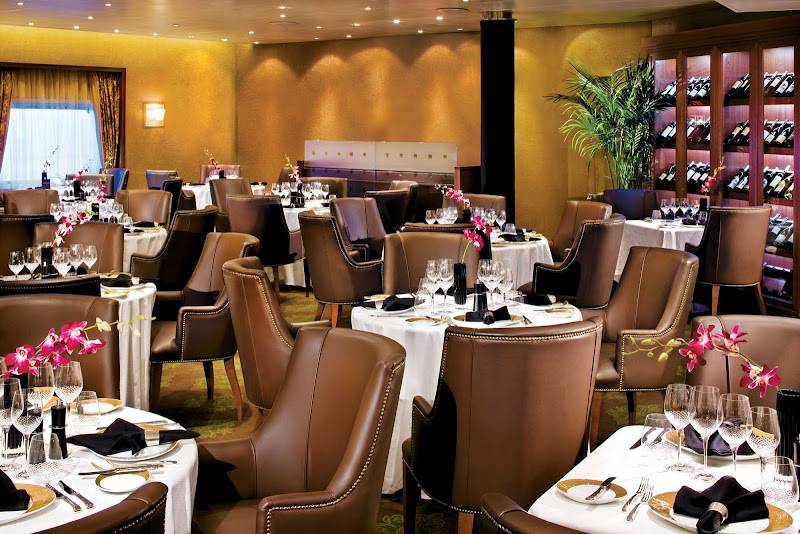 Regent Seven Seas, owned by the same company that owns Oceania, is just as food-centric, thanks to founder Frank Del Rio (affectionately known in the industry as FDR), who believes in high-quality ingredients at any cost. Wines are poured with each outstanding gourmet dinner and at lunch, too.

One of my favorites is Prime 7, a steakhouse that's exceptional from start to finish with its crab cakes, classic steak tartare, clam chowder and their juicy, tender, USDA prime dry-aged New York strip and 36-ounce porterhouse. (Don't worry, there's a gym!)

Regent gets culinary input from France’s most famous cooking school, Le Cordon Bleu, especially for its Signatures restaurant. The venue has a Parisian feel to it, with floral upholstered chairs and classic fare such as Camembert, walnut quiche and rack of lamb with morels.

Cost: All restaurants are complimentary. 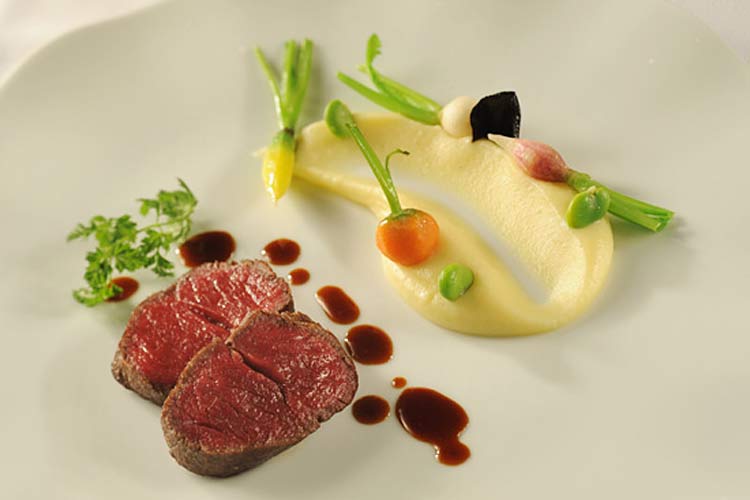 If you're heading out on Disney Cruise Line, you shouldn't be shy about getting into the Disney spirit. The adults-only French restaurant Remy, with a subtle decor inspired by the Disney flick "Ratatouille," features a three-hour seating, a sumptuous seven-course meal and a wine-pairing option. The fare leans to innovative, modern French fare with a trolley-based cheese course. If you're so inclined, you can even meet with the sommelier before dinner to plan for your wine accompaniments.

Standout Italian restaurant Palo impressed me during a Disney cruise a few years back. Winning dishes include lobster ravioli and osso buco. 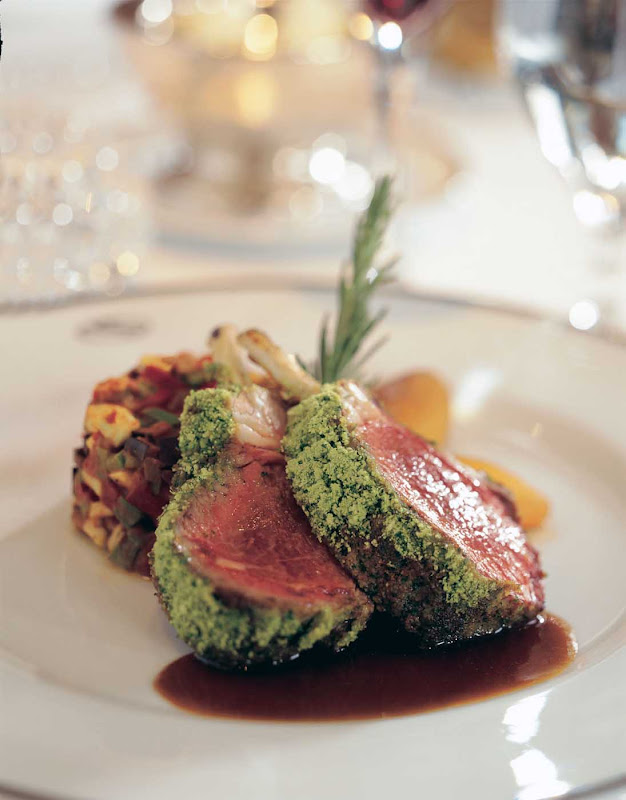 Courtesy of SeaDream Yacht ClubExplore the flavors of the Mediterranean on a SeaDream cruise.

The award for best private outdoor dining may go to SeaDream Yacht Club. Its intimate, 110-passenger yachts offer consistently sublime cuisine, smart service and beautiful backdrops in the Mediterranean and Caribbean. Sample dishes in the main Dining Salon on deck 2 include homemade terrine of foie gras with fresh fig compote, fillet of cod with herb crust and tomato chutney, fresh lemon tart or other creations by your private onboard chef. The style of cooking is à la minute, made to order with only the freshest ingredients. Dress is casual yet stylish. On certain nights, weather permitting, the yacht also features “Dining Under the Stars” at the tastefully appointed Topside Restaurant.

If you're looking for a romantic getaway with great food, SeaDream is a good choice: You can book a table for two in a private outdoor space and dine beneath the stars on your own.

Ships: Pinnacle Grill is the signature restaurant on all Holland America ships.

Other standout dinner fare on Holland America ships can be found at An Evening at Le Cirque ($49 per person), a reservations-only special seating styled after the New York City landmark restaurant; Canaletto ($10 per person), serving some of the finest regional Italian cuisine at sea, and Tamarind ($20 per person), with a menu featuring pan-Asian dishes and dim sum.

10Starting earlier this year, Princess Cruises began upgrading its cuisine in a big way.  Princess brought on Curtis Stone — the Australian celebrity chef, TV personality and founder of the Hollywood restaurant Maude — to revamp its culinary offerings. The result is Share, a classy yet informal venue where family-style sharing is the rule. Look for freshly made pasta, charcuterie and winning dishes such as a braised cassoulet of duck and the twice-cooked duck with fennel, bacon jus and Parmesan crumb. It's a lively small plate concept where diners are asked to choose three small, savory dishes, with the added option of sharing with your partner or table mates. Passengers also can get a taste of chef's savory creations with a new "Crafted by Curtis Stone" menu now in all of Princess's 18 ships.

While Share got off to an uneven start before finding its footing, the new Salty Dog Gastropub, created in collaboration with renowned chef Ernesto Uchimura, won immediate raves. It's filling, satisfying fare, such as the juicy rib-eye burger.

Tomorrow, Cruiseable runs its pick of the 5 best burgers on a cruise ship.

How about you? What's your favorite dining spot for yummy cuisine on a cruise ship? Am I totally off base? Please share in the comments below.