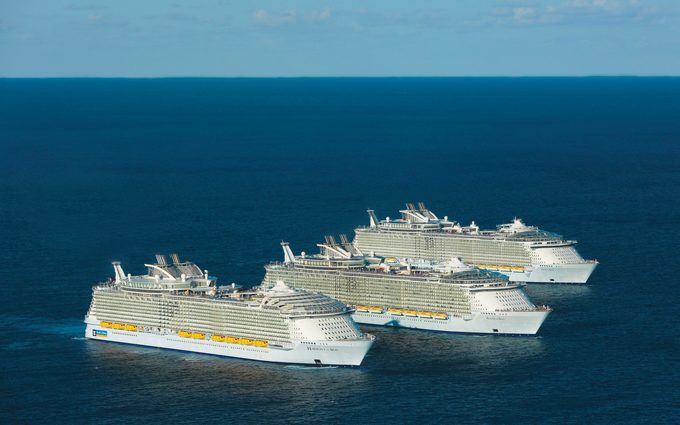 The three largest cruise ships in the world have ‘met’ for the first time in Fort Lauderdale, Florida.Royal Caribbean International's Oasis-class ships, Oasis of the Seas, Allure of the Seas and the new Harmony of the Seas appeared together to mark the latter’s arrival at her new permanent home at Port Everglades.All three feature seven themed ‘neighborhoods’, a Central Park with nearly 12,000 plants and trees, FlowRider surf simulators, an 82-foot zip wire, luxurious multi-level loft suites with floor-to-ceiling windows, an outdoor ‘aqua theatre’ that hosts high-diving, aquatic and acrobatic performances, and a Boardwalk with a hand-carved carousel. Until recently Oasis of the Seas, which sailed in 2009, and Allure of the Seas, which followed in 2010, had held the record as the largest cruise ships in the world.

I have sailed aboard the Oasis of the Seas twice and the Allure of the Seas once. My family found them to be fantastic ships with plenty to keep them occupied while aboard.  I especially liked Central Park and the Aqua theater.  Now that Harmony of the Seas will be berthed in Florida, I am planning a family vacation aboard for later next year.