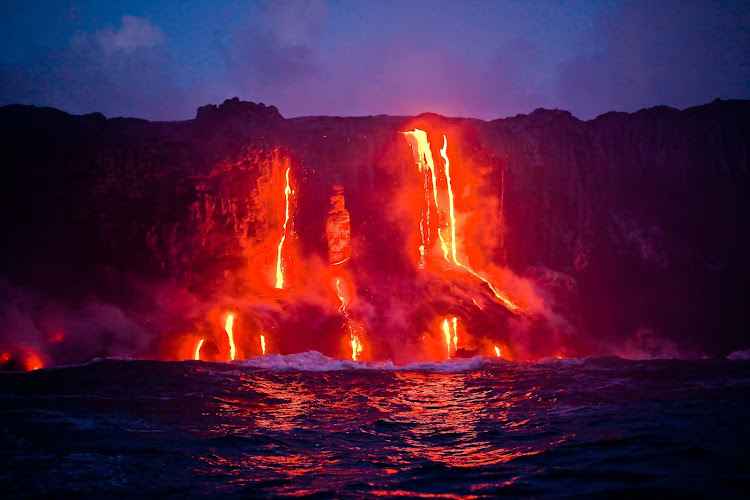 Hot magma flows into the Pacific from a volcanic eruption on the Big Island of Hawaii.

Cruising in Hawaii: the world's most relaxing family cruise?

Stretching ahead, as far as the eye could see, was a desolate expanse of volcanic rock, broken only by a plume of white smoke rising from a crater into the cloudy sky.All was quiet, all was calm. Pele, the Hawaiian goddess of fire who reputedly resides in the crater of the Kilauea volcano, was obviously (and a little disappointingly) at peace that day.The Hawaiian Islands are famously volcanic, their lush terrain a by-product of the mercurial elements that have made this tropical archipelago one of the most geologically volatile places on earth. On the Big Island – where our ship Grand Princess was moored during a 14-night cruise of the islands – such tempestuous outpourings are confined to the 500-square-mile Volcanoes National Park, one of their top attractions.

The Hawaiian Islands are very beautiful and there are many things to see and do.  I would have to agree that a cruise to the Hawaiian Islands would be a great family vacation although I am unsure if the number of sea days would go over well with my family.  Might be better to fly and take a cruise around to the different islands. Norwegian Cruise lines would be the only option for this type of cruise.