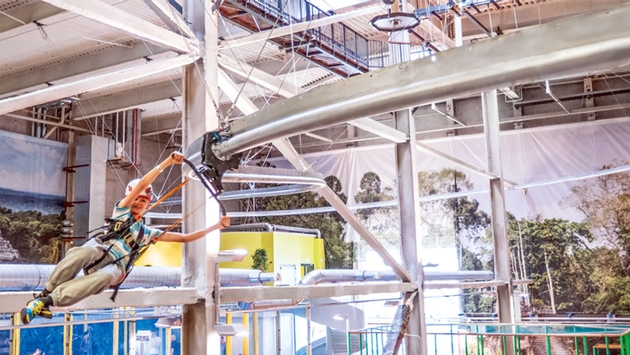 Walltopia’s Rollglider might be the wildest cruise ship attraction yet

Just weeks after speculating that a zip-line roller coaster type of attraction might at some point make its way aboard a cruise ship, Walltopia, a climbing wall manufacturer, has actually modeled what its Rollglider product, called a “safe proximity flight,” would look like onboard.The company has even produced a fully rendered video, embedded below, showcasing what its zip-line roller coaster hybrid product might look like installed on one of Royal Caribbean International’s Sovereign-class vessels like the Majesty of the Seas. While it doesn’t actually show it running, it does give you a sense for how such an attraction would scale and potentially traverse high above and out beyond the upper decks of a relatively small ship.In reality, the Rollglider would probably be better suited to a larger cruise ship like Royal Caribbean’s own Harmony of the Seas, the biggest one in the world currently, where it could really sprawl a much longer distance. The pairing of the video-rendered attraction with a ropes course even suggests it could be well suited to Carnival Cruise Line or Norwegian Cruise Line which already have such structures perched on their decks.

All I can say is WOW.  This looks like a fun thing to do and would make a welcome cruise ship attraction.  Even with my fear of heights I think I would give this a try.  I wonder which cruise line will be the first to give this a go.