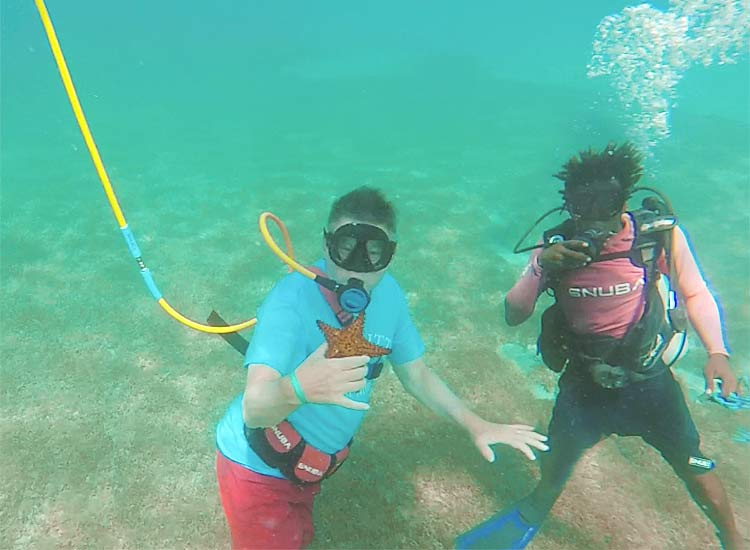 A starfish spotted during a snuba expedition in St. Kitts last month.

A recap of our first snuba underwater adventure in St. Kitts

Breathe in, breathe out. … In … out. …. Clamp your teeth down hard on the diving regulator. In, out. In, out. Relax, relax, relax.

Pretty soon, the conscious mechanics of breathing through a regulator, a device that delivers pressurized gas or air to a diver, becomes second nature, and what’s in front of your eyes takes precedence: A school of sergeant majors! A silvery cloud of … what are they? And is that a parrotfish chomping audibly on the coral reef?

This is snuba. About eight fellow passengers and I went on our first snuba expedition at Friar’s Bay on the Caribbean island of St. Kitts St. Kitts during our Wind Surf cruise there last month. One of us, Kay Cone, brought along her GoPro and shared some clips of the dive, so Cruiseable stitched together this 90-second look at our underwater experience:

First developed in Northern California in the early 1990s, snuba has since been adopted in warm, shallow-water destinations around the world. It’s offered as an excursion on many cruise ships and is especially popular with passengers who are comfortable with snorkeling, would like to take it to the next level, but aren’t ready to bite the considerable financial bullet required for scuba certification.

No certification or prior dive experience is required to participate in snuba, although it helps, from a psychological standpoint, to have some prior experience with snorkeling mask and fins. Snuba adds a breathing apparatus and a weight belt, which helps participants attain neutral buoyancy, a point at which one can float freely without floating up or sinking down.

For first-timers: How snuba works 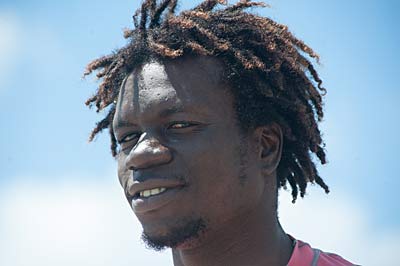 You and three companions are attached by 20-foot hoses to compressed-air cylinders contained in a raft floating on the ocean’s surface. Once you get the hang of it, including how to clear your regulator and mask in case a bit of water leaks in, the only thing to keep up with is your guide, attired in full scuba gear, who is towing the contraption through the water, guiding his charges along an underwater route and pointing out highlights along the way.

The experience is hypnotic, delivering at least a hint of the rapture that keeps scuba divers coming back for more.

Our snuba outing was offered as an excursion by Windstar and appealed because I am an avid snorkeler and former scuba diver who had long ago let my certification lapse. Snuba seemed like a good meet-in-the-middle option, as it indeed turned out to be. 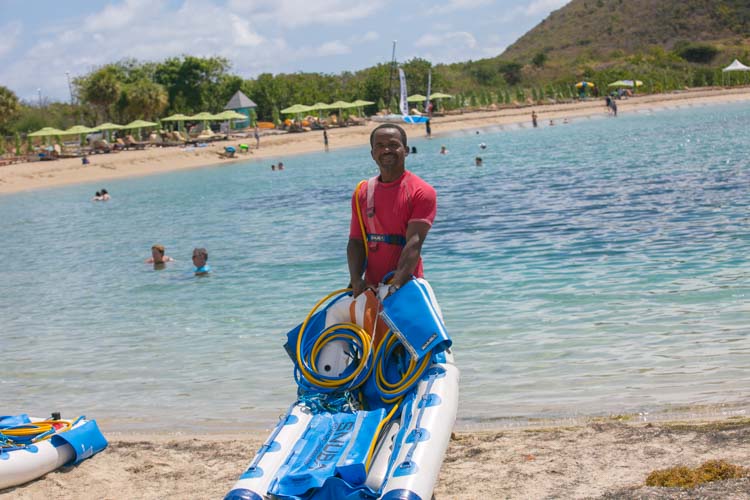 JD Lasica / Special to CruiseableDavid of Kantours shows off the snuba raft used on our outing.

Eight of us shuttled in a van provided by Kantours, the tour operator, from the port at Basseterre to Carambola Beach Resort on south Friar’s Bay. Two snuba rafts were waiting. Our guides, David and Calvin, provided an orientation that, in my opinion, didn’t go quite far enough in explaining the overall scope of the adventure on which we were about to embark. They distributed gear (mask, fins, regulator, harness, weight belt), hooked us up to our air lines and off we went.

For the next 45 minutes, we swam slowly at depths of 10 to 20 feet over rocks and reef inhabited by numerous species of tropical fish. It wasn’t the clearest water or most spectacular marine life I’ve ever witnessed, but it was well worth the experience of falling into the rythyms of breathing underwater and viewing the world from a Jules Verne perspective. 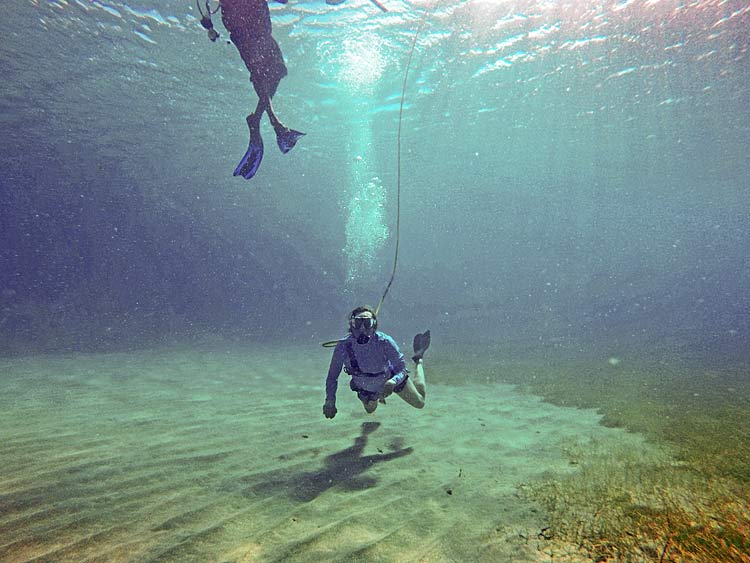 Kay Cone / Special to CruiseableA look at the underwater landscape during our snuba excursion.

A few folks, unsure at first, came to the surface and, with reassurance from the guide, held onto the raft’s grab rope for a few minutes before going down again. A plus for those like me who wear glasses or corrective lenses: Underwater masks magnify what you’re seeing, which may mean (as it did for me) that you’re not just swimming through a blur.

A sure sign of a successful excursion: It was all smiles at the end, with almost everyone exclaiming that they’d like to keep going or do it again.