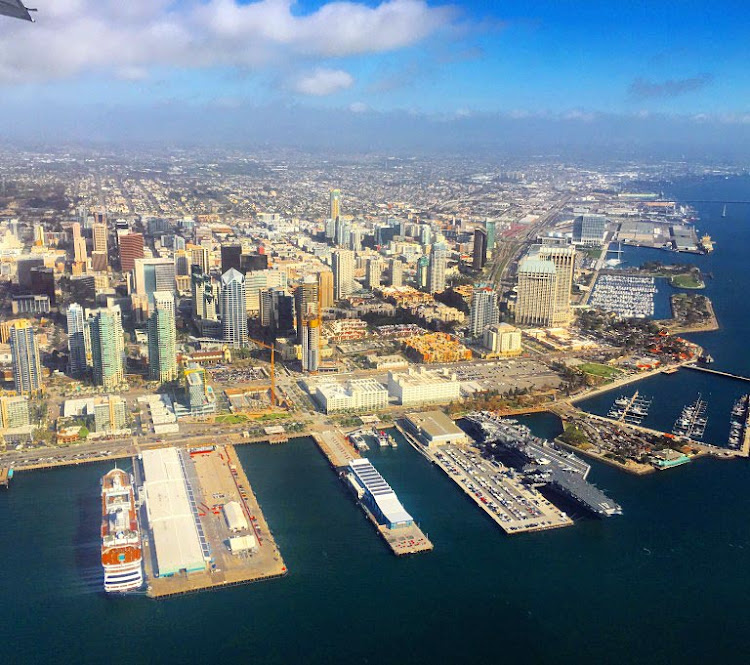 The San Diego skyline as seen from a San Diego Seaplanes floatplane.

San Diego seaplanes: A thrilling tour from the sky

As a lifelong resident of San Diego (see Cruiseable's travel guide), I often offer inside tips on what travelers can do and see in the area.

Earlier this month I took to the air on an aerial tour of coastal San Diego provided by San Diego Seaplanes. If you're visiting San Diego or have a day to spend in town during a cruise, this is a fun, memorable, exhilarating way to spend a few hours. 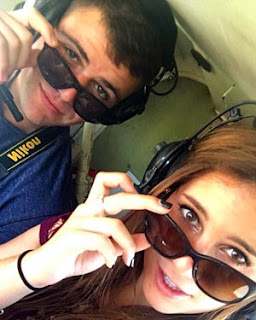 Jessica Hartmann / Special to CruiseableThat's me with my friend Preston as we were about to depart.

Some flights make a stop on the beach to have a picnic, while some stay in the air touring around. One thing each flight does is land and take off again from the water, giving visitors and locals an almost literally immersive plunge into the San Diego experience. No need for a drone camera — you can just snap some aerial shots on your phone while passing above downtown!

On a clear day in San Diego day — in other words, most of the time (we're one of the sunniest cities in the U.S.) — you will have stunning views of this place we call home! Whether you are a local or a tourist, this is an excursion you will need to do.

Here's a blow-by-blow of my adventure with San Diego Seaplanes. 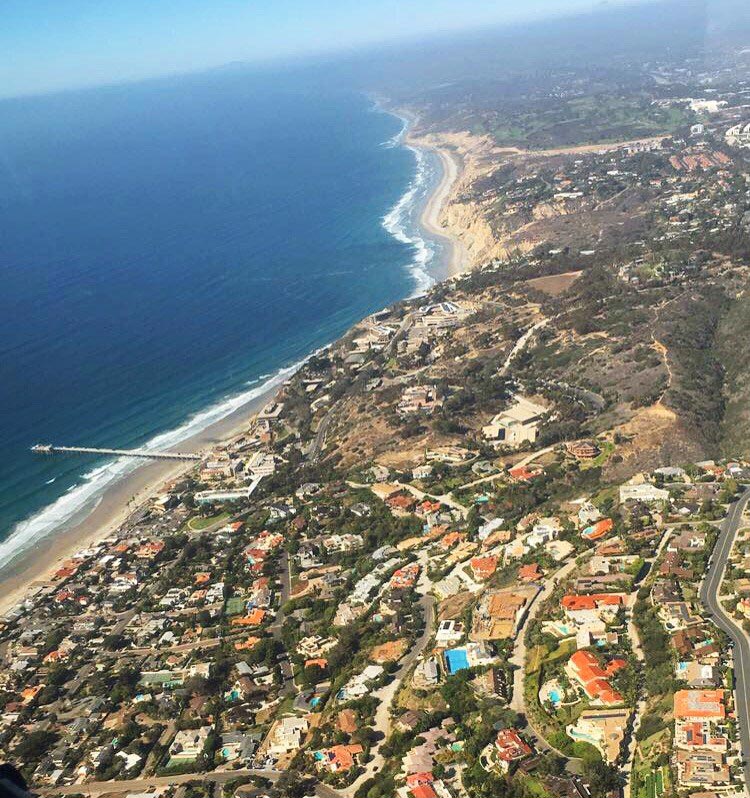 Jessica Hartmann / Special to CruiseableFlying above the coastline en route to La Jolla.

From Mira Mar to La Jolla

We donned headsets (a requirement) to communicate with each other. Then we departed our flight out of Mira Mar, where a private airport is, and flew directly west to La Jolla. On our way to the coast, we flew over the various main freeways, and local neighborhoods. The flight did not have a strict schedule it had to follow, as it was up to the passengers. Each flight is able to fly a total of 5 passengers, making it an intimate experience. While flying over La Jolla, we stopped and watched for sea lions and dolphins from the sky. We were able to spot several of these, in addition to being able to see the coral reefs off the coast. 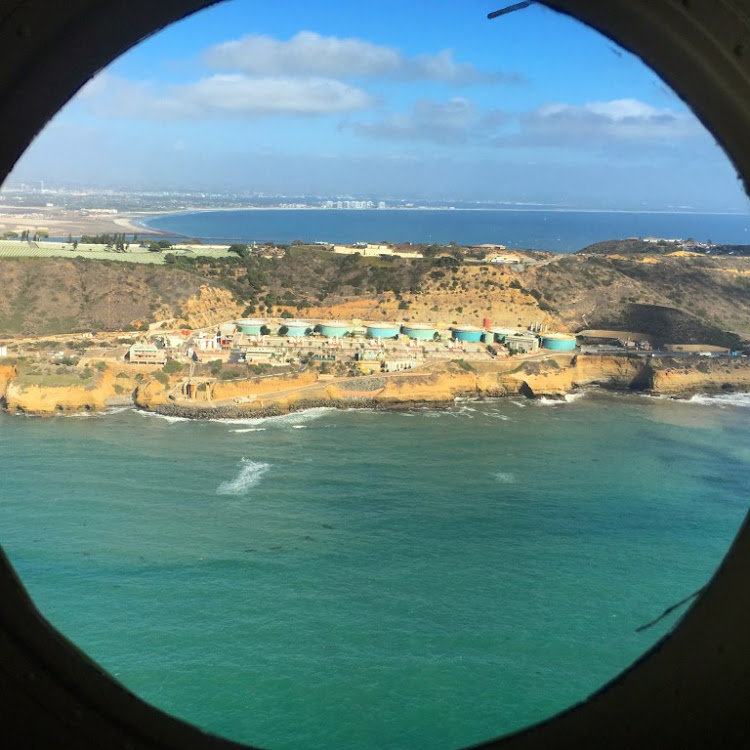 From La Jolla, we flew down the coast over the water to Pacific Beach, passing Sunset Cliffs, to the seaside community of Point Loma, pictured above. We were able to pass the ‘‘point’’ of Point Loma, which is home to a famous lighthouse. We were also able to spot the military cemetery on the cliffs. 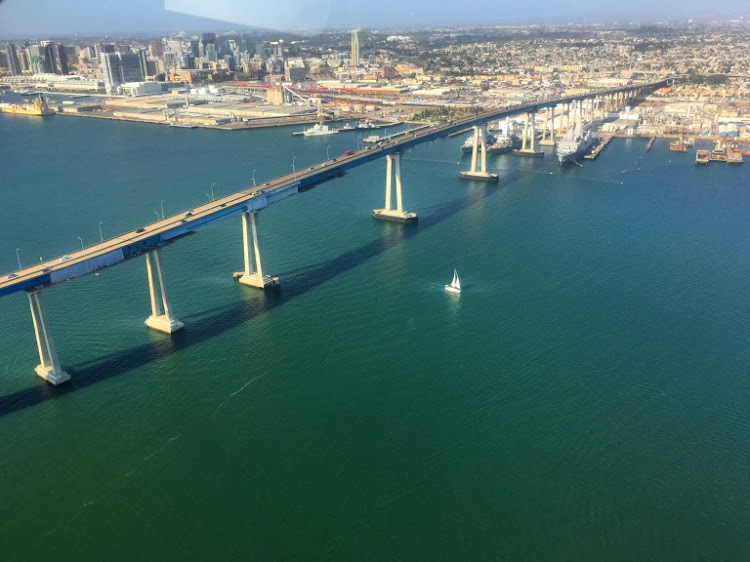 Next our flight passed over the top of downtown San Diego and on to Coronado, which is the island off the coast of San Diego. In the bay between Coronado and San Diego, we touched down for our water landing. I was both extremely excited and nervous to do the landing. I remember sitting in the hotel room in Vancouver not long ago staring out at the seaplanes landing on the bay, thinking I am going to do that one day! That day was finally here! 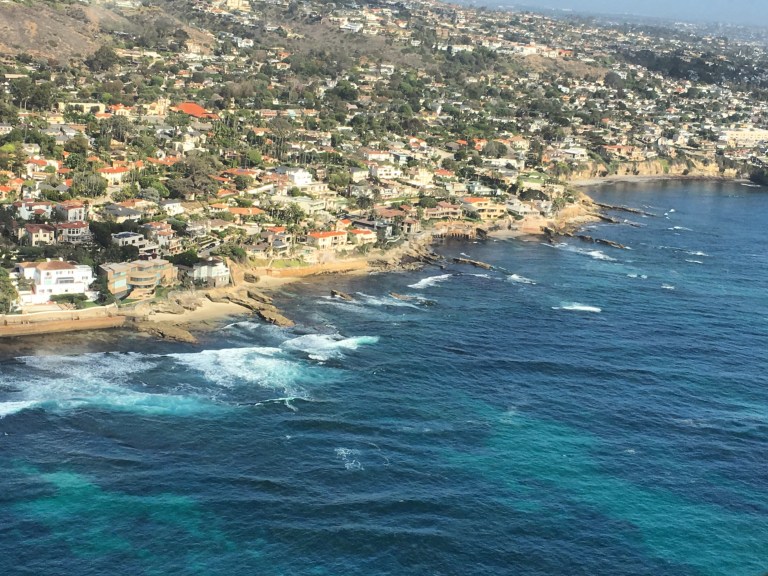 Jessica Hartmann / Special to CruiseableThe view of the coastline from the air was mesmerizing.

The water landing was much smoother than I could have ever imagined. I have to be honest, I have been on some commercial flights that have had much worse landings than this floatplane did. The landing reminded me of jetskiing, as we were gliding on the water for a while, and then took back off into the air over the Coronado Bridge.

Recommended for a romantic afternoon

I loved the overall seaplane excursion and would recommend it to anyone who wants an adventurous way to see San Diego. If you're on a date (or double date), honeymoon or celebrating an anniversary, this getaway is a great option. 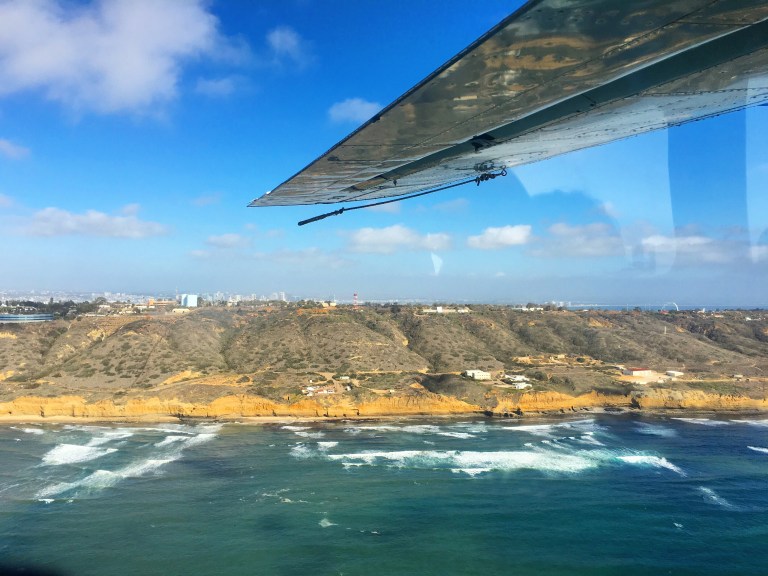 Jessica Hartmann / Special to CruiseableOn the return flight, one last sweep of the coastline.

How to arrange an excursion

Traveler tip: Ask the pilot if you can co-pilot the plane, as you'll be able to steer and guide the plane with his assistance. This is an option you'll only rarely come across. If you tend to suffer from motion sickness, take a Dramamine before taking off, as the flight can get a little bumpy. 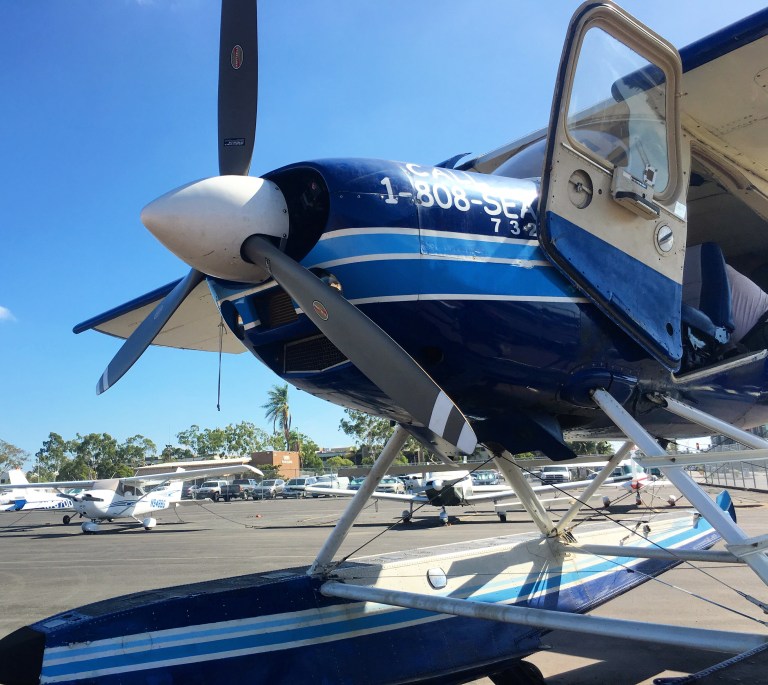 Jessica Hartmann / Special to CruiseableThe floatplane that lifted us into the skies above San Diego. Yes, it gets around on dry land, too.