St. Kitts & Nevis travel guide: What to do & see

As if it were the custom in the Caribbean, St. Kitts & Nevis changed hands many times between English and French, which has left it a heritage of cities with names from both countries. On the contrary, the architecture in these Leeward Islands in the West Indies is very Anglo-Saxon (Victorian style).

The 65-square-mile island of St. Kitts and Nevis became an associated state of the United Kingdom with full internal autonomy in 1967, the smallest independent nation in the Western Hemisphere. St. Kitts (often spelled out as Saint Kitts) is home to the capital, Basseterre, while Nevis lies about two miles away, across a shallow channel called "The Narrows." The island nation has 50,000 residents.

Basseterre is  one of the oldest towns in the Eastern Caribbean. This small town has two city centers: Circus Place, a tiny roundabout with the Berkeley Memorial Clock, which is focused on tourism, and the Independence Square with its historic buildings like courthouse and cathedral. A highlight of both islands is their lush, tropical forests and raw natural beauty, including many rare tropical birds. 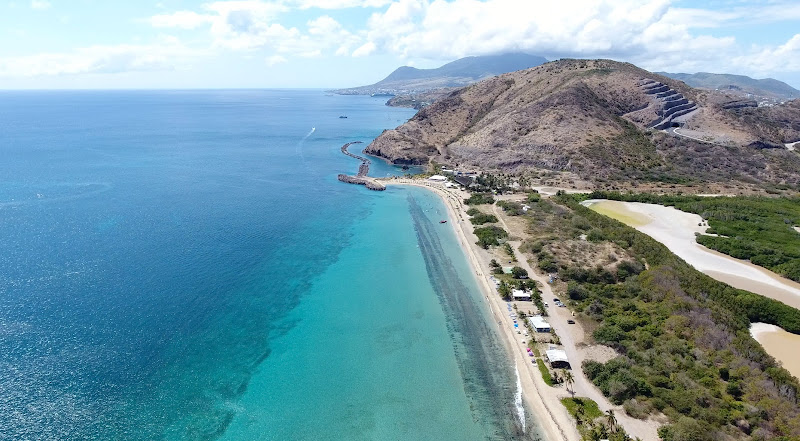 JD Lasica / Special to CruiseableDrone image of the narrow beach and coastline of Frigate Bay in St. Kitts, looking north.

As you depart your cruise ship, you will pass through a large archway, which houses the National Museum. Continue through Basseterre (also spelled Basse-Terre ) to the Circus, an area with shops and restaurants frequented by visitors to St. Kitts. Then go east to Independence Square where you will find the courthouse, Cathédrale Notre-Dame-de-Guadeloupe de Basse-Terre, and other historic buildings. Leave time to browse at the Amina Craft market on your way back to your ship.

The island of St. Kitts  is full of possibilities for day trips. Take a rainforest walk, including a well-maintained trail above Romney Manor that travels along and across the Wingfield's river. This is probably the best marked trail, complete with ropes and steps.

If you scuba dive, there are numerous shipwrecks to explore. St. Kitts offers a variety of beaches to explore, including Cockleshell, combining white powdery sand beach and restaurants and bars, and Turtle beach, which is a little more remote but teeming with fish in the water. 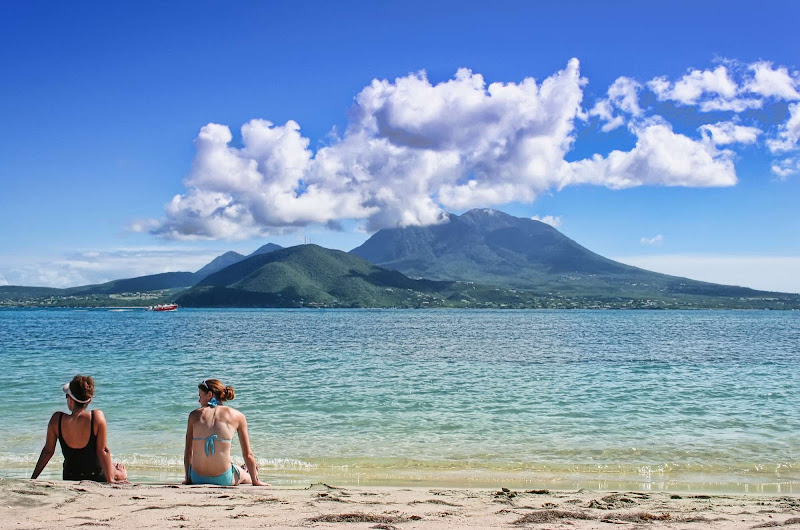 Charlestown, the capital of Nevis, is a small, pretty town, with a Main Street lined with Georgian stone buildings. Take a tour of  the Hermitage Plantation' in St. John, built of lignum vitae wood in 1640, is the oldest surviving wooden house still in use in the Caribbean today.

St. Kitts' scenic railway was originally built between 1912 and 1926 to transport sugar cane to the central sugar factory in Basseterre. It offers gorgeous views over farms, small villages and historic windmills. In order to make the 30-miles-loop around the island, a distance of 12 miles (19 km) is organized by bus. A round trip takes about 3 hours.

While the two islands are small, there is no shortage of good food and drink. Right in the center of Basseterre, you'll find Ballahoo, which features French food and views of the lovely downtown.

If you're looking for something more romantic, Marshall's Restaurant in Nevis won't disappoint. Its dining room is poolside and provides ocean views, and local flavor can be found with dishes including conch ceviche and lobster thermidor.

Another great option is Yachtsman Grill, which is located on the beach facing St. Kitts with Mt. Nevis in the background. Enveloped by lush gardens, seafood is the main cuisine here, or you can choose to relax on a beach lounge chair and enjoy cocktails (lounge chairs can be rented from $10 to $40). 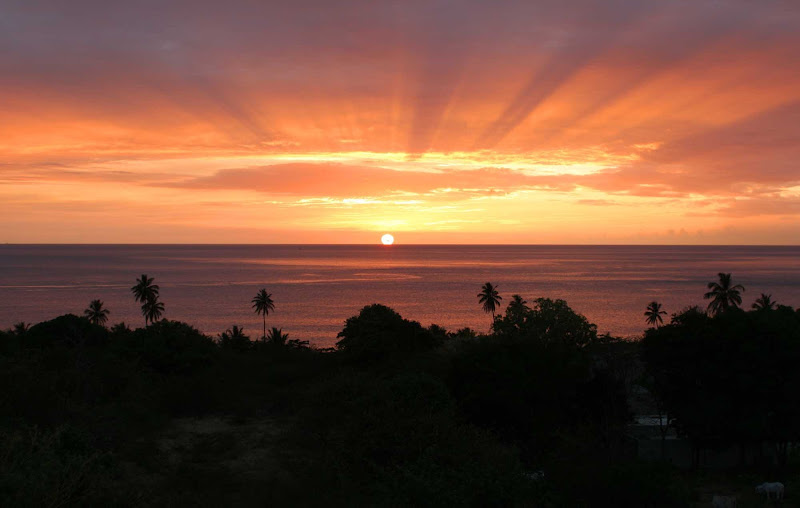 unknown / Courtesy of Nevis Tourism AuthorityA perfect sunset on the tropical island of Nevis in the Caribbean.

St. Kitts is perhaps best known for its annual music festival, with performers ranging from Michael Bolton to Nas. It's generally held in June.

The climate for these islands is tropical, tempered by constant sea breezes. There is little seasonal temperature variation; however, the rainy season is from May to November.

Port Zante is the cruise ship pier in Basseterre. From the pier, it is a 15-minute walk into downtown Basseterre.

Taxis and buses both use micro buses. Official taxis can be identified by the yellow license plate starting with the letter "T" or "TA." Make sure you agree upon the price with the driver before entering the taxi. During night time, between 10 pm and 6 am, a 50% surcharge is added to the standard price.

St. Kitts and Nevis are connected by ferry service, which takes about 45 minutes and offers lovely views of the two islands. 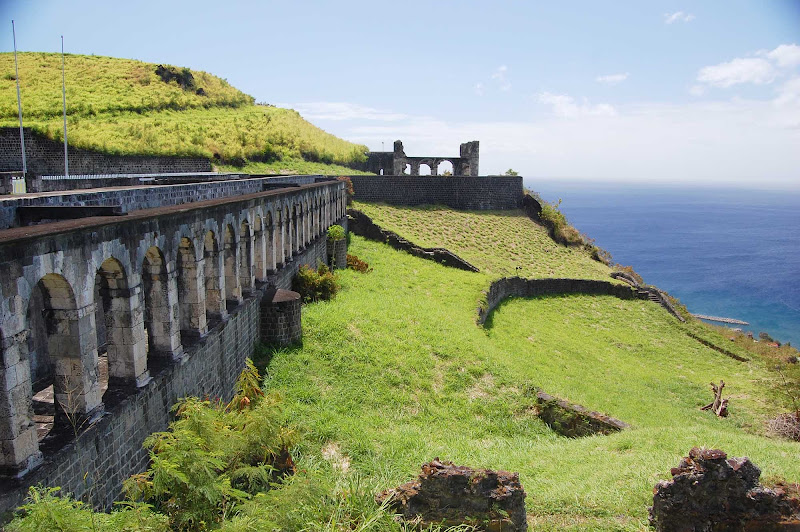 Documents: A passport is required.

Language: The language of St. Kitts & Nevis is English. However, if you have never visited the Caribbean before you may have difficulty understanding the Creole language, spoken by the locals, which is based on the English language but to the untrained ear sounds nothing like it.

Currency: The official currency is the Eastern Caribbean Dollar (EC$).

Shop hours: Stores are typically open between 10 am and 5 pm Monday through Saturday. While is Port Zante, you will find excellent duty-free shopping on an array of luxury goods.

Tipping:  In restaurants, a 10% to 15% tip is recommended and taxi drivers will happily receive a tip of 10% though it’s not required.

Dress: Make sure to wear shoes and shirt in the city and in public places. Wearing beach attire in the city is taboo.

Have you been to St. Kitts & Nevis? Please share a story, tip or discovery. What was the highlight?

“Speaking of Cockleshell, be mindful of where you set your mojito — the green vervet monkeys who call this beach  home are just as fond of the drink as tourists and would-be expats.”

“From Basseterre, get your heart pumping with a half-day hike into the rainforest of St. Kitts with stops to sample fruits along the way. For a more serene experience, catch the ferry to the slow-paced island of Nevis and hire a cab to explore its lush beauty.”

“We arrive at Romney Manor, greeted now by the smell of hot wax. Demonstrations start daily at 8:30 a.m. as local women paint wax designs on fabric, then dip and dye to create brightly colored patterns. The finished product is sold on site, making me grateful I stopped for souvenirs while my wallet still bulges.”

“Cockleshell Bay, on the rocky peninsula below Basseterre, has two miles of white sand and calm blue waters.  Sea cliffs provide a windbreak for the snack shacks, and umbrellas shade napping parents as teenagers splash. Next to the Reggae Beach Bar, a carved memorial to a pet pig bears this marker: WILBUR, LIVED DE LIFE, RUSHED SLOWLY. Taking this to heart, I tested the barstools on the peninsula one afternoon. Spice Mill owner Roger Brisbane poured me a Ting-and-passion-fruit punch to pair with his fried-grouper sandwich.”