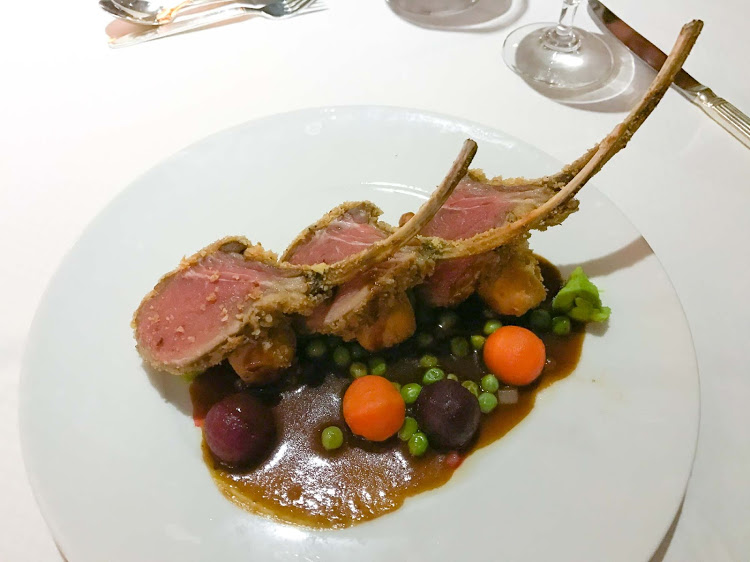 Roasted rack of lamb, aka lamb lollipops, at Stella Bistro on Wind Surf, whose kitchens are overseen by executive chef Eddie Barretto.

At sea with Windstar's executive chef

Chef Eddie Barretto knows how to cook for a seafaring crowd

Chef Eddie Barretto knows how to cook for a crowd.

Before moving into the small-ship realm of Windstar Cruises in 2014, he spent 12 years with Royal Caribbean, including a stint on the mega-ship Oasis of the Seas. That floating city at sea carries 6,000 passengers and 2,400 crew, all of whom have to be fed three times a day—not counting room service, afternoon tea, midnight buffets and all the other non-stop food service required to keep guests happy.

Do the math: That a lot of meals, not to mention provisioning. 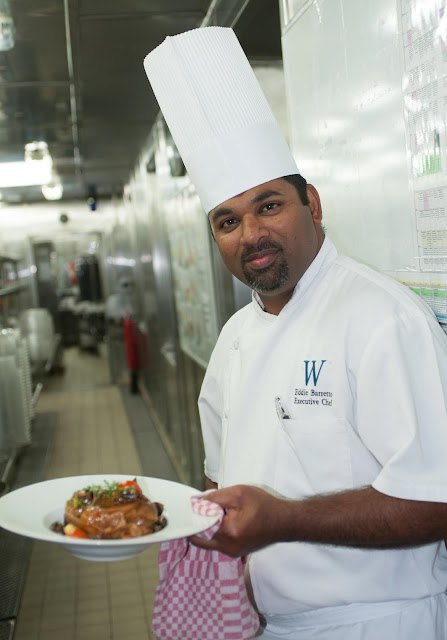 Janet Fullwood / Special to CruiseableEddie Barretto, executive chef of Wind Surf, with a prepared dish at the entryway to the ship's kitchen.

What constitutes a crowd is a matter of scale, of course. Suffice it to say that, by comparison, Wind Surf, capacity 310 passengers (plus 180 crew), is, for Barretto, a boutique operation.

“I love working on small ships because like to get hands-on,” the native of Goa, India, says. “I can feel and touch things here, while on a big ship I don’t have that opportunity. Here I can be more creative.”

And creative he is, crafting meals that reflect the many global cuisines in which he was trained. Barretto’s father and grandfather were food service professionals, so it was only natural that young Eddie follow in their footsteps. His culinary training started at age 17 and continued through a rigorous program with the prestigious Taj Hotels chain.

Most recently, he’s worked on all six Windstar vessels. We caught up with him on Wind Surf, the line’s flagship, where he supervises a kitchen staff of 34 that prepares meals for guests in four restaurants. (In addition, he crafts separate, behind-the-scenes menus for the largely Indonesian cabin staff, Filipino deck staff and European ship’s officers.)

While a hint of India slips into many of Barretto’s entrees, he conscientiously caters to the demographics of Windstar’s clientele. “Most of our guests are in their 40s to 60s,” he notes, adding that “we have a lot of people with medical conditions and a lot who are gluten-free. As a result, we serve a lot of fresh food, and we always go one level down on the salt.”

While Windstar ships sail around the world, Barretto’s favorite itineraries are the line’s Classic Caribbean (this one) and Yachtsman’s Caribbean circuits. He derives special satisfaction from procuring fish and other local specialties from the small islands at which the ships call. “I love going to small places and going off site and looking for local things I can bring on board,” he says, pointing to the kingfish on the day’s menu as an example.

“I also enjoy Europe, where we have a choice of markets,” he adds. “ I love going into restaurants, tasting, looking, asking where something is sourced and tracking it down.”

Supervising the culinary program aboard a cruise ship is about more than menu planning and execution. Procurement is a critical element of the equation. On Wind Surf’s Caribbean itineraries, most supplies are purchased in Florida and shipped from there to St. Maarten.

“I do the ordering for four weeks at once,” Barreetto says. A typical invoice, he notes, covers 850 pounds of flour per week, 6,000 pounds of beef for two weeks (“we have a lot of beef lovers”), 2,300 pounds of chicken, 1,800 pounds of seafood and 1,400 dozen eggs. Keeping fresh produce fresh is a challenge that Barretto takes upon himself. “Humidity is critical,” he says of storage practices.

So is keeping track of consumption and minimizing waste. “We keep a record of how much is sold on every cruise, take an average and make 5 percent extra,” he explains.

So what does a busy chef do during his personal down time? In the Caribbean, Barretto likes to relax on the island of St. Martin/Sint Maarten. His schedule gives him two months off after four months at sea. At home in India, he basks in the embrace of a family that includes two young children, ages 10 and 12.