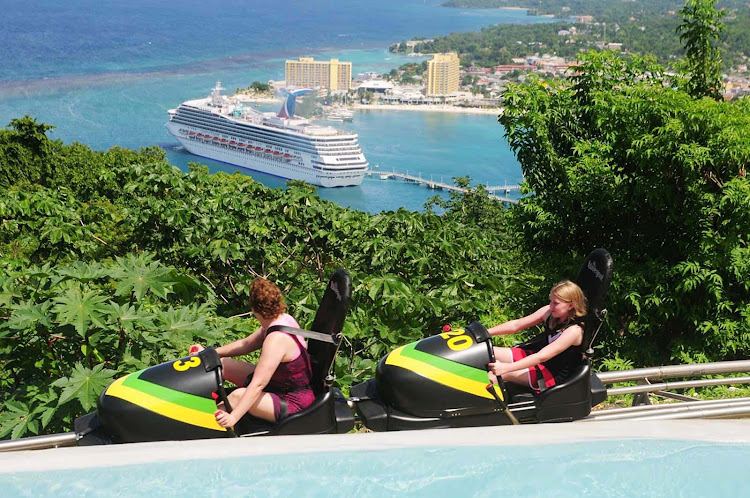 We put Jamaica's top tourist attractions through their paces

Whether your ship stops at Ocho Rios or you're coming from the somewhat sterile port of Falmouth (an hour to the west, where our ship docked), you have options. What Falmouth in particular lacks in beaches and local cultural attractions it makes up for during a day tip filled with adrenaline-fueled rides and memorable sights.

Highlights? You get to climb a waterfall and race down a mountain. How cool is that? Here are some highlights from our Bobsled Jamaica and Dunn’s River Falls adventure.

Getting prepped for our cool runnings

While there were plenty of activities during our Western Caribbean cruise aboard Royal Caribbean's Allure of the Seas, we wanted to relive the experiences of Jamaica's Olympic Bobsled team, made famous by the 1993 movie “Cool Runnings.” So, after we met our tour guide and made the hourlong trek by bus, we were ready for Bobsled Jamaica.

After the uneventful ride, which flew by quickly, we arrived at Mystic Mountain. The environmentally friendly theme park offers a number of attractions, including ziplines, but on our trip we had paid for just two of them, a ride on the aerial explorer (i.e., chairlift) and a trip on the bobsled.

A 700-foot ascent via the Sky Explorer lift brought us to the mountain's peak, and we disembarked to find a little resort area. Some locals were dancing in a small courtyard to the Caribbean music wafting through the air. After a little exploring we headed to the bobsled ride and, after a short wait, climbed into the sled cars.

Here's how it works: You sit one person per sled, but two sleds can be attached for families and friends traveling together. You can't actually steer the sled, but you can use the brakes to control the speed. In the front car, there are two levers; pushing down releases the brakes and letting up on them slows down the bobsled. 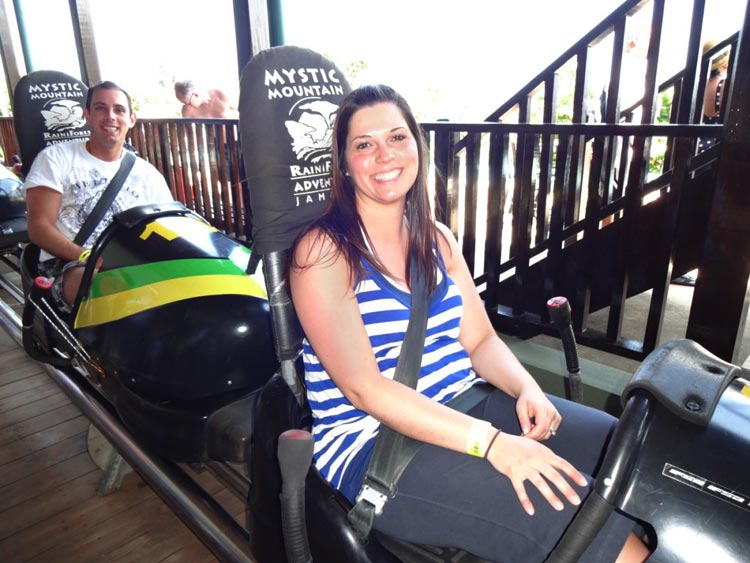 At the outset of our bobsled ride, as we were about to race down the 3,200-foot-long track through tropical landscapes with views of the coast.

The original thrill seeker, my companion sat in the front car so she could be in charge of the speed. Naturally, she did not let up on the levers once during the trip. When the track was cleared, we were released and we raced down the mountain at full throttle.

The park’s signature attraction, Rainforest Bobsled Jamaica lets you race down the 3,200-foot-long track at a rapid pace, propelled not by motors or electrical power but by gravity. As you glide through dense tropical landscapes and views of the coast, it feels as though the sled will be careening off the track at any moment. I tried to take some pictures before we really got going, but it proved to be too challenging (we need a GoPro!).

Though exhilarating, the bobsled ride seemed to end too quickly. Once you reach the bottom of the mountain, a lift brings the car back up, similar to a rollercoaster. Back on top, you can choose to pay an additional fee to ride the bobsled again or just hang out until the next portion of the excursion.

Tips? Here's what to bring:

Note: Children must be at least 3 feet 10 inches to ride the bobsled.

We explored the Pavilion building for a bit after our bobsled ride. Here, you can see exhibits about the Jamaican Olympic Bobsled team as well as absorb other notable historical and culturally significant facts about Jamaica.

In the courtyard, past musicians, dancers and merchants selling arts and crafts, we climbed the few flights of stairs to the Lookout Tower. From here, we could see the port of Ocho Rios in the distance with a Carnival cruise ship docked. We could also see the infinity pool and waterslide that were additional  paid options to enjoy while on the mountain, but we were ready to move on to the next leg of our excursion and so descended aboard the Sky Explorer. 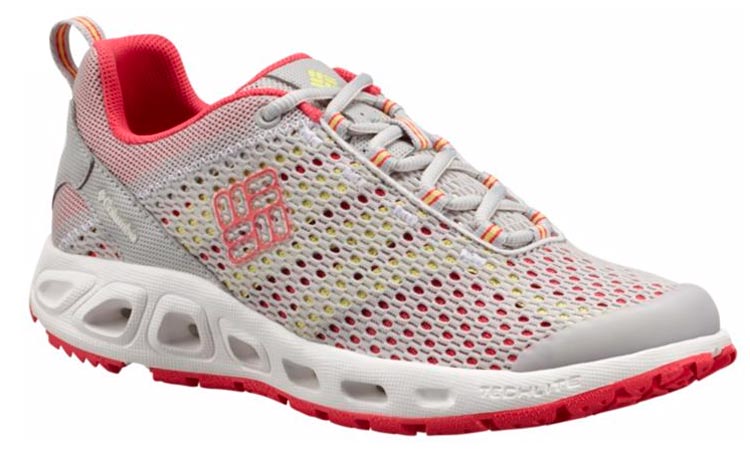 Once at Dunn’s River Falls, the bus parked in a large, crowded parking lot and we met our waterfall guide, Tammy. Along the way toward the waterfall we came across a number of vendors selling supplies, including water shoes, which are essential to climb the falls. We came prepared with our Columbia Drainmaker water shoes. These comfortable walking shoes have a rubber sole and feel sneaker-like while still giving the airy and quick dry characteristics of other water shoes.

Now, Dunn's River Falls is no Niagara Falls, but this 185-foot-tall, 600-foot-long unrelenting flood of water should be taken seriously. While you'll climb the falls in a human chain, it's slippery, wet and at times a rigorous workout.

Once everyone in our group was settled and ready for the climb, we lined up at the base of the waterfall and met the videographer who would be following us for the duration of the climb. We were given some basic safety tips, including the need to remain hand in hand, forming a human chain. Not even two minutes into the climb, we lost a few members of our group, bowing out of climbing the falls after only the first few steps. Hmm, what did they know? 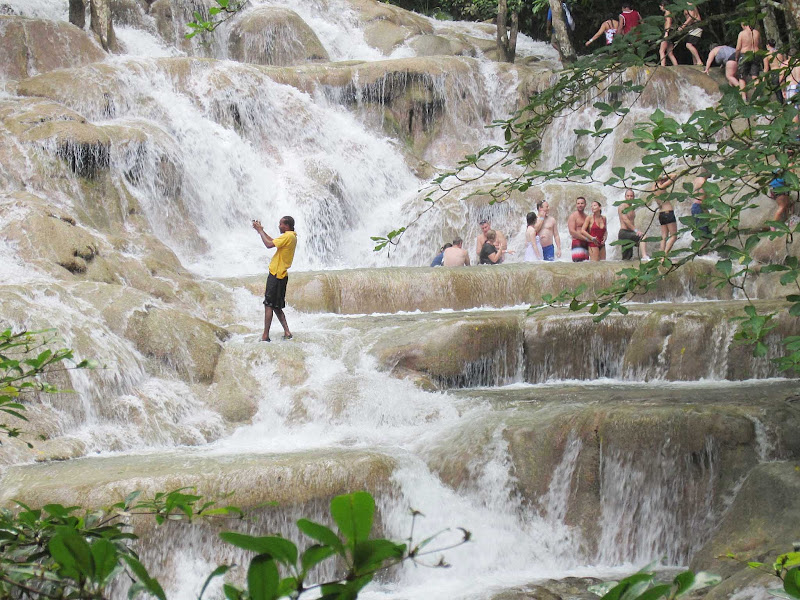 The beginning of the climb was not too bad, but it soon intensified. Rushing water, slippery rocks and steep inclines helped to get my adrenaline pumping but set my partner over the edge. The fact that she cannot swim coupled with her not-so-rugged nature was stressing her out.

Now, don’t get me wrong — you definitely need some lower body strength and leg power to propel yourself up the inclines — but I think she was just letting fear get the best of her. And she had company: A few other members of our group began to bow out as the more athletic or intrepid travelers led the pack while the stragglers lagged behind. Our guide, Tammy, did her best to keep us together and and prevent injuries. After all, we were in the middle of a waterfall with no harnesses or safety features and mobs of people everywhere.

After a while, Tammy took us to the far side of the waterfall with a pretty steep climb to avoid some of the other groups. At this point, I was in the middle of our pack and my wife began to lag behind — until Tammy took her hand and with a firm grasp and said, “Let’s go. You are coming with me.” And she made it through the next part of the climb in the bright afternoon Jamaican sun, holding the hand of the only female guide at Dunn’s River Falls.

Takeaways from our shore excursion

You can tackle Dunn's River Falls by yourself, or just play around on some of the less challenging slopes, but for the full 90-minute hike, you really need to sign up with a guide. If you like the water, the climb is a lot of fun. But make sure you're up for it.

There are various stopping points where you pose for the videographer under a small waterfall, where the guide drops you backward into a pool of water, and where you slide down the running water plunging into a deeper pool. Once you are at the top, it's so rewarding to look back at what you have just accomplished.

At the excursion's end, you exit through an open air market that is filled with locals pressing visitors to buy their wares. We forged ahead without making eye contact. Back at the bus, I grabbed money to purchase the DVD and tip our guide for what turned out to be a fabulous excursion.

How about you? Have you tackled the Bobsled Jamaica ride at Mystic Mountain or made it to Dunn's River Falls? Which did you like better? Please tell us in the comments!