A highlight of Cruiseable's Caribbean cruise on Windstar's 310-passenger flagship Wind Surf came on March 28 when we spent the day on Pigeon Island, a peninsula and national park in northern St. Lucia. The crew really went out of their way to put together an awesome Windstar Island Experience,  a Windstar tropical tradition consisting of a lunchtime barbecue and a daylong bevy of water sports activities. 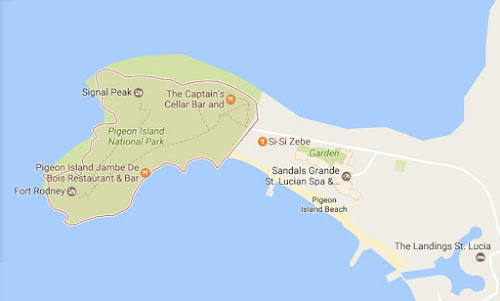 Nearly everyone on the ship tendered over to the private cove where the Windstar staff set up their signature umbrellas and B.J. bin Bajuri, Cat Amorim and their team set up watercraft activities consisting of kayaks, stand-up paddleboards, wakeboards, windsurfing boards, Hobie Cats (small sailboats) and snorkel equipment.

Late in the day I took my Phantom 4 drone to an isolated spot where I could fly out to the ship, which I couldn't do in Barbuda (too far away), Dominica (ship was docked), St. Barts or Guadeloupe (prohibited in both). These are the best drone images I've captured since I got my drone in December — now I'll need to get a faster computer to process its hi-def video.

More from this cruise