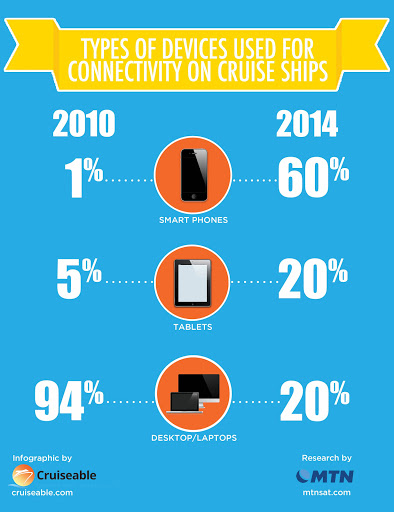 This graphic shows the shift in device usage aboard cruise ships from 2010 to 2014.

How do we communicate with family, friends and our social networks during a cruise? A study just released by MTN Communications shows a dramatic shift in our device usage in just four years' time.

We were impressed enough by the findings that Christine Davila of our team whipped up the infographic above — please share on your own social networks or blog!

MTN reported that in 2010, the breakout of devices used to purchase and access the Internet aboard cruise ships were as follows:

In 2014, the device split changed dramatically to:

If you've been on a cruise lately, you've likely noticed the same trend.

In the next day we'll be publishing our series with tips about Internet connectivity and mobile use at sea.

(Update: Here's our series on Staying connected at sea — at a reasonable cost.)