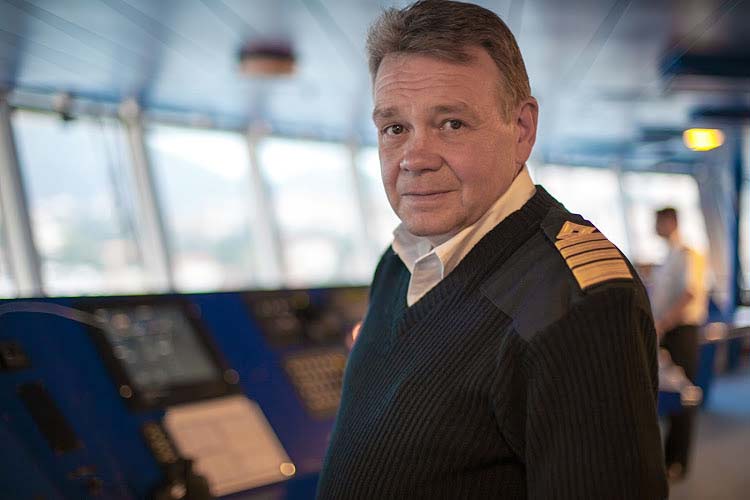 Captain Atle Hahon Knutsen on the bridge of Viking Star.

A behind-the-scenes talk with the Viking Star's captain

During my recent 10-day cruise aboard Viking Star from Istanbul to Venice, I interviewed six of the ship's crew members. (And here's my review of Viking Star.)

Here's part 5 of our series: my 5-minute video interview with Atle Knutsen, captain of the Viking Star.

Everything rolls up to the ship captain

Knutsen, who hails from Bergen, Norway, and now lives in San Diego, began working on cruise ships in 1986 on the Royal Viking Sea. On Viking Star (and many other ships), the ship captain oversees the deck, engine and hotel departments. The three department heads report to the captain, who's responsible for everything that takes place on a cruise ship.

When he walks around the ship speaking to passengers, he's frequently asked about the weather ahead and questions about the ship's technology, including GPS.

"People say that when they come on board it’s like visiting someone’s home.”

"I remember the first satellite service I worked with, you’d an update on your positioning once every four or six hours," he said.

When I spoke with him, Knutsen had been on board for five straight weeks and had been off the ship for a grand total of one hour. “I’m not here for sightseeing,” he said.

His favorite port? Bergen, Norway. "The most beautiful coastline in the world is in Bergen," he said.

As for the Star, he says Viking has brought something quite new to the cruise world, chiefly because of the design of the ship,

"We’re not glitzy, it’s much more a relaxing atmosphere. ... People say that when they come on board it’s like visiting someone’s home.”

A quick technical note: I brought a monopod, not a tripod, on the ship, and so there's some camera shake. The video editing programs didn't have anti-shake stabilization in the versions I use.