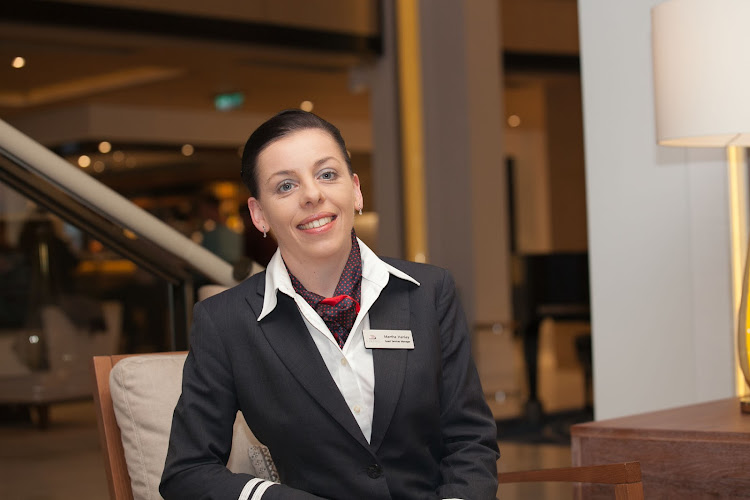 Martha Hanley, guest services manager of Viking Star, in the Atrium outside the Explorers Desk.

Part 2 of our interviews with Viking Star crew members

Here's part two of our series, with the ship's guest services manager.

You're the guest services manager on Viking Star — tell me about your job.

How long have you been in guest services?

I have been doing this since 2001. I started working on the Disney Magic in 2001 until 2006, then I worked on Paul Gauguin for two years, I moved to Regent Seven Seas in 2009 until last year when I joined Viking.

What attracted you to working on cruise ships in the first place?

I was at university, studying foreign languages, and I studied French and Italian so when I finished my degree I went back to France and got a job at Disney Paris. One day in 2001, they asked me if I spoke English correctly and I said yes I do and they had a position in Miami and so off I went, thinking that eventually I would get to New York, where I always wanted to go because of the Frank Sinatra song. When my visa ran out they asked if I wanted to work on the Disney Magic and I said I would love to. So that is how it happened, almost by accident.

And what attracted you to Viking?

One reason I love working here is it is a family-run company, not a multibillion-dollar business. We all started out at the shipyard together. Miss Hagen (Karine Hagen, daughter of chairman Torstein Hagen) comes on board to help a lot. You don’t feel just like a number, which you might feel somewhere else.

What are some of the unusual queries people make at the Explorers Desk?

People ask for whole fish at dinner. They want to have a whole fish, like a whole salmon for them and their friends. When we were in Norway, we were able to acquire those things, but here in the Mediterranean it is very different — fresh fish being available. And people have the concept that the fish is fresh today, not frozen. So that can be tricky.

We also get questions about time zones. 'Why are we changing time zones, why can’t we go back to American time zones?' People are clear that once you leave the U.S., you can’t be on the same time zone, but they think the ship should be. The most common question is, 'Where is the gangway?' It is on deck A. Then there are the married couples who say, 'I can’t find my husband' or 'I can’t find my wife.'

Do you sometimes handle weddings?

We had a wedding last night on board! So we do get that a lot. On embarkation day a gentleman asked about getting some flowers on board — but he didn’t mention a wedding! You have to be careful with flowers like lilies: People can be allergic to different types of flowers. In the end the fellow said he needed a wedding bouquet and we ordered  four lovely bouquets for the ladies and one large one for the bride. We ordered those from Athens. The groomsmen wore tie-dye T-shirts — they said they were kind of hippies in the '60s.

Is there anything you wish customers knew before they came to you?

The one thing I wish they knew is that they are not actually bothering us when they come to see us. Most guests on any ship always apologize and say, 'I’m sorry to bother you,' but we're there to help them. We would prefer to know about any issues they're having so we could resolve it. 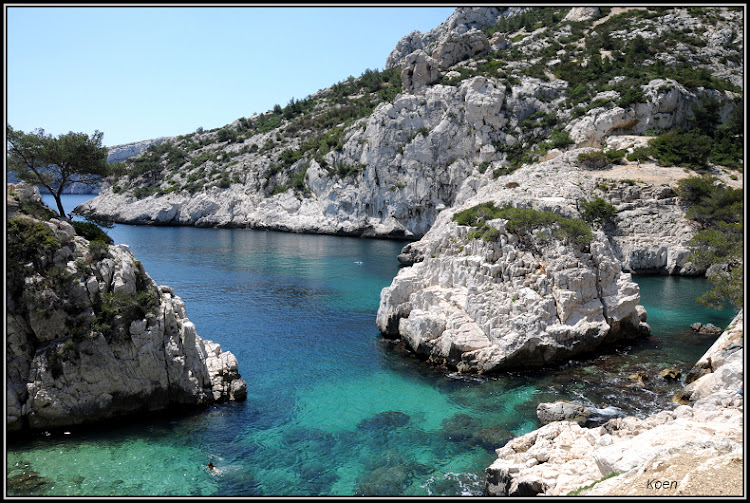 Photo by Koen / Creative Commons BY NDSoleil des Calanques, just a half hour from Marseille in southern France. "These islands are just as beautiful as Bora Bora," Hanley says.

How long during the year do you actually cruise? Are you on the ship, say, six months at a stretch?

I'm usually on the ship for 4 ½ months and then be on vacation for 6 weeks. And then come back for the same.

Yes. Right now we’re in the Mediterranean and then in April we go all the way north to Greenland, and then on to Quebec and the U.S.

Do you have to do anything to prepare for different kinds of destinations?

Oh, yes. We have to do a lot of preparation, in particular, with passport and documentation. It is very important. Every time you bring a ship to a port the clearance laws are different and you have to work with the port authorities, and when you go to the U.S., they are different than European ones. We prepare for that.

You do not need your passports due to the agreements Viking has with Croatia. Port authorities come on board in the morning and before the ship is cleared, and they review documentation.

Exactly. The reason we had to collect passenger passports before calling on Athens is because Greek authorities are required to stamp them, so we took them on embarkation day to check that No. 1, we had all the passports and No. 2, that any guests traveling from specific countries outside the U.S. or E.U. had the proper visas. We always need to make sure we have those passports before we set sail, otherwise we could run into difficulties. When we get the passports, we check the information to make sure it is 100% correct, because often when it is being inputted in the office, you might have an incorrect expiration date, etc. and to clear the ship it must be 100% accurate.

Tomorrow we are going to Kotor and the next day to Dubrovnik, do we need our passports?

You do not need your passports due to the agreements Viking has with Croatia. Port authorities come on board in the morning and before the ship is cleared, and they review documentation. If there is a crew person or guest they want to see, we will call them down. It happens rarely.

We have to submit it 48 hours in advance. They will check, especially at the moment. There are things that need to be checked. You can tell by nationality.age group, they would be looking for more specific people.

I hoped to get a Montenegro passport stamp!

They won’t do that for you, sir.

Dang. When we’re in port, do you and your fellow crew members get off the ship?

A lot of people do, but I stay here a lot. When we are in port, I am involved in medical emergencies. Unfortunately, when we have people going on tours, things can sometimes go wrong — they fall or get scraped. Many things happen, and we need to look after them and their partners and organize the insurance papers and accident reports.

I do. Marseille is my favorite port. I love France so much.

It is beautiful and if you take a boat ride 30 minutes away, there are islands called le Soleil des Calanques, and these islands are just as beautiful as Bora Bora, Tahiti. And it’s right there in France! You should check them out, right next to Marseille. Very beautiful.

How many languages do you speak, and do you run into Chinese or non-English speakers?

I speak English, French, Italian, Spanish. Viking Star is an English language ship. If there was a Chinese speaker, we would advise them to bring an interpreter with them.

And there’s an app for that.

Yes, you can go to Siri.