Stylish, spry and quite the looker, the first ocean ship from Viking Ocean Cruises gives off the vibe of a different kind of cruise ship. Yes, like its river ship cousins, Viking Star places a big emphasis on place, with itineraries jam-packed with drool-worthy destinations and intriguing shore excursions. But it also manages to provide a near-luxury experience and premium amenities at down-to-earth prices.

Unlike mass market lines with their crowded buffets, endless lines and persistent efforts to pad your final bill, Viking Star offers a refreshing change of pace. Throughout our voyage, we never felt crowded, even for a moment. Crew members are genuinely friendly and relentlessly attentive. And the ship’s décor is honest and modern, featuring clean lines, light-filled spaces and Scandinavian accents, a tribute to the company’s Nordic roots.

Viking Star knows where it came from and seems confident about where it’s going.

If you're looking for something fresh and want a cruise experience that is destination-focused with maximum time in port, then this new ship might be ideal. Experienced travelers with an interest in history, art and culture will find a lot to like on the laid-back, genteel Viking Star. The ship is geared to couples in their 30s to 70s rather than to families; the minimum age is 16. As with many other cruise lines, the passenger makeup is a bit homogenous, with many newly retired affluent couples, and Viking says that 95 percent of Viking Star's guests are Americans.

Viking Star offers cruises throughout Scandinavia and the Baltic Sea as well as the Western and Eastern Mediterranean. 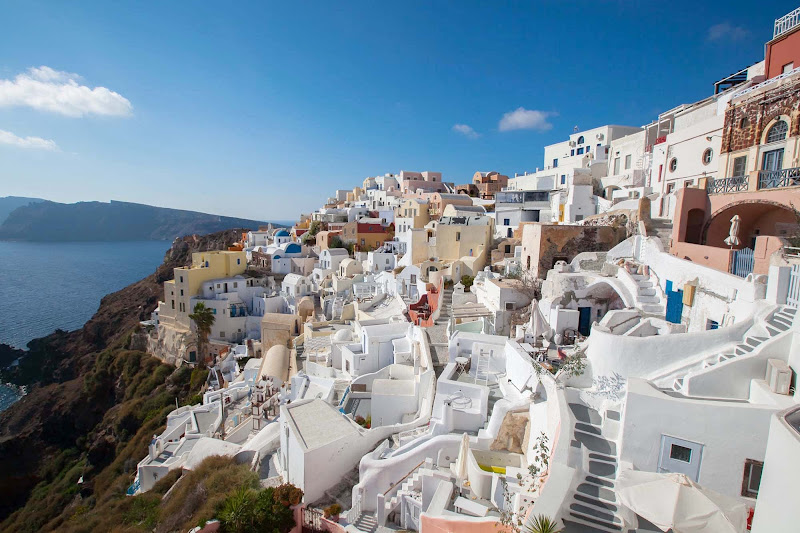 JD Lasica / Special to CruiseableOia, on the Greek island of Santorini, offers one of the most scenic lookouts in the world. It was one of the highlights of our cruise on Viking Star.

This is no supersized river ship

If you think Viking just supersized its river ships for ocean voyages, think again. Viking Star, which debuted in May 2015, was conceived from the ground up as a new kind of ocean ship.

At 47,800 gross metric tons, the Star is sleek enough to dock at most ports minutes from the heart of the action. We had to take a tender only in Santorini, Greece, and Pula, Croatia. 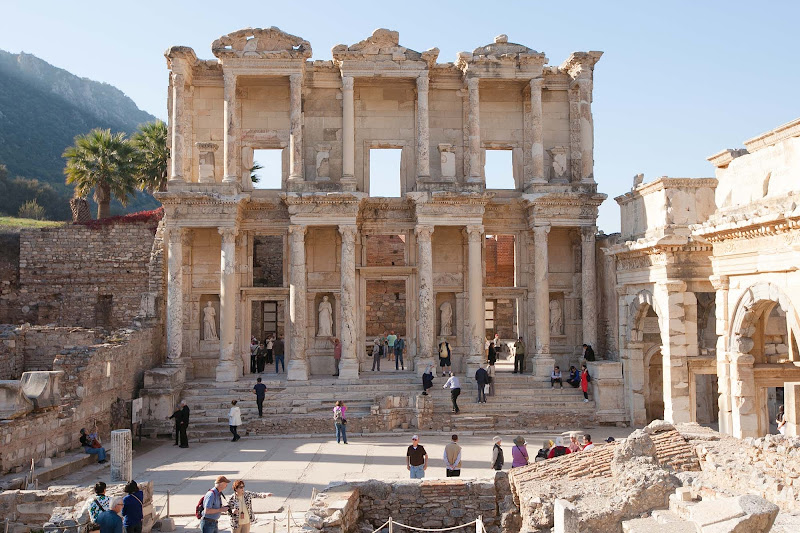 Where I went & what I loved

My wife and I sailed on the “Empires of the Mediterranean” itinerary in November 2015, along with 840 fellow guests, starting in Istanbul (where we felt completely safe, by the way) and continuing on to Kusadasi (Ephesus), Athens, Santorini, Kotor, Dubrovnik, Pula, and ending in Venice on Thanksgiving morning. 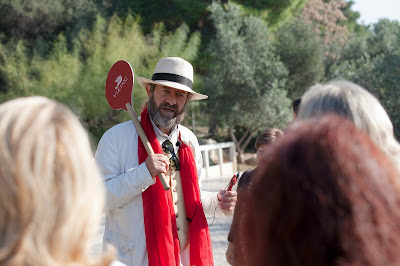 I didn't have a lot of time preparing for this cruise so I relied on Cruiseable's in-depth travel guides, and we came to look forward to the daily Port Talks given by the silky-voiced, entertaining cruise director, Aaron Syfert.

Admirably, Viking provides one shore excursion at each port as part of your fare, as well as giving you the option to sign up for more extensive explorations at an additional cost. The excursions were handled by engaging, knowledgable local guides shepherding about 15 or 20 of us at a time. Less steady were the QuietVox audio receivers, a staple of Viking cruises, which flaked out with some regularity so we couldn't hear the guide's descriptions. (Time for an upgrade, Viking corporate!)

We had been to Athens, Santorini and Venice before, but not Istanbul, Kotor or Dubrovnik, but we fell in love with all three destinations and hope to return soon. 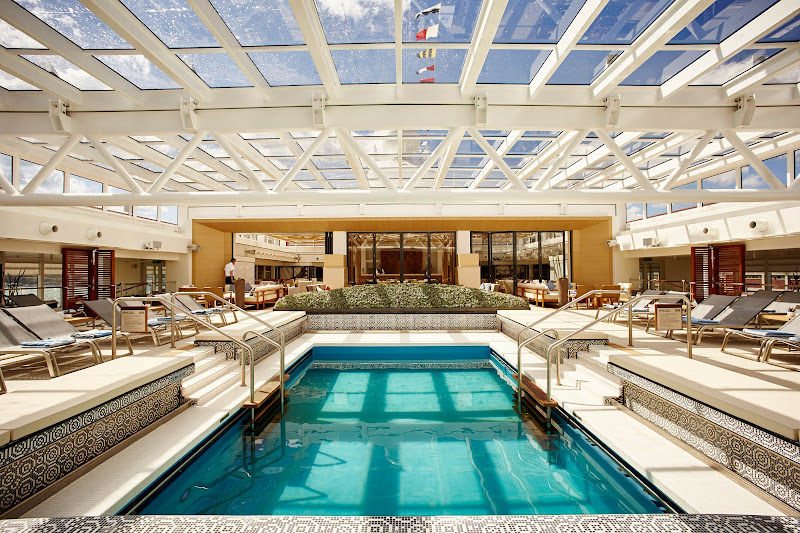 Activities & entertainment on board

Viking Star is not a ship that parties late into the night — and that's fine, since you'll likely be up at the crack of dawn preparing to hit another port. 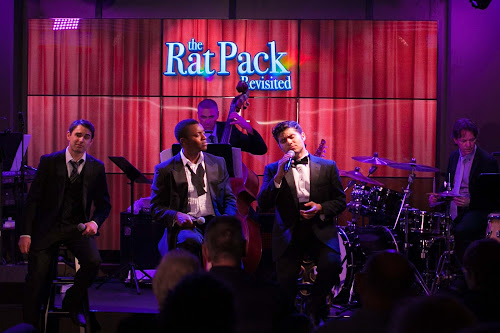 JD Lasica / Special to CruiseableThree talented singers perform in "The Rat Pack Revisited," one of the shows aboard Viking Star.

That said, there's plenty to do on board. Some highlights: 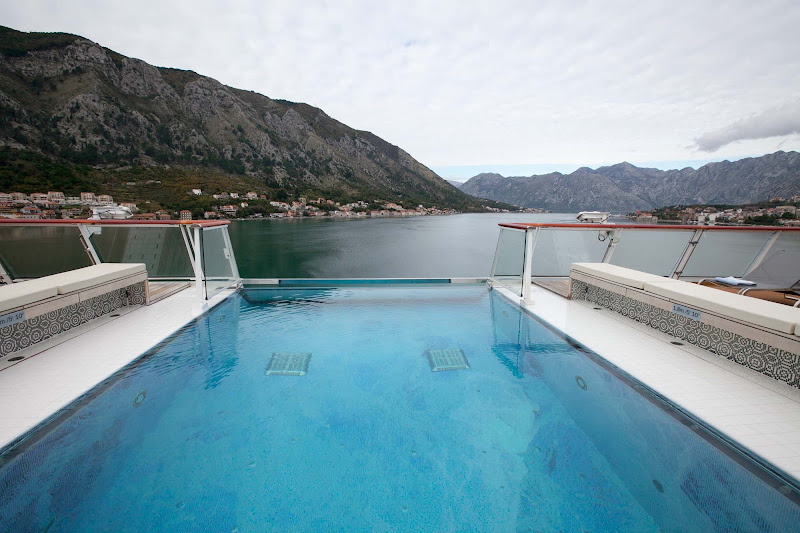 There were enough options on our sailing to please foodies, both on the ship and on land, and we loved staying out for dinner in Istanbul, Athens and Kotor — plus all those lunches in port. We also took advantage of the complimentary 24-hour room service in our stateroom. And while Viking Star offered multiple choices for al fresco dining, we didn't see anyone brave the November climes and venture outdoors for breakfast or dinner during our sailing. In warmer weather, the Aquavit Terrace at the aft of the ship looks splendid.

Notably, all of our meals were included in the base fare. Two of the dining venues would qualify as specialty restaurants, with a surcharge, on other ships.

The Restaurant, the mainstay dining venue on the ship, serves standard Continental and American fare with added splashes of regional specialties. (And check out the photo of the creepy-cool moving characters, straight out of a Harry Potter movie, at the entrance.) During breakfast and lunch I loved the floor-to-ceiling windows that offered an al fresco ambience.

It's apparent the dining staff is still working hard to find its groove. On our first night, I made the poor choice of ordering the lobster, which proved to be dull and unappetizing — though that may be due to my years on the Left Coast dining on fresh lobster, which most cruise ships can't regularly snare.

Our second dinner at The Restaurant proved more rewarding, with a nice Beef Wellington and lump crab salad, and we struck up a conversation with a couple from Missouri next to us. (Seating, with an adjoining table a foot away, was such that you could decide to be social or keep your conversation contained.) Service, though earnest, was hurried. At one point my Sauvignon Blanc was refilled with the house wine; at another point, a waitress cleared our silverware and glasses, even though the main course had not yet arrived. 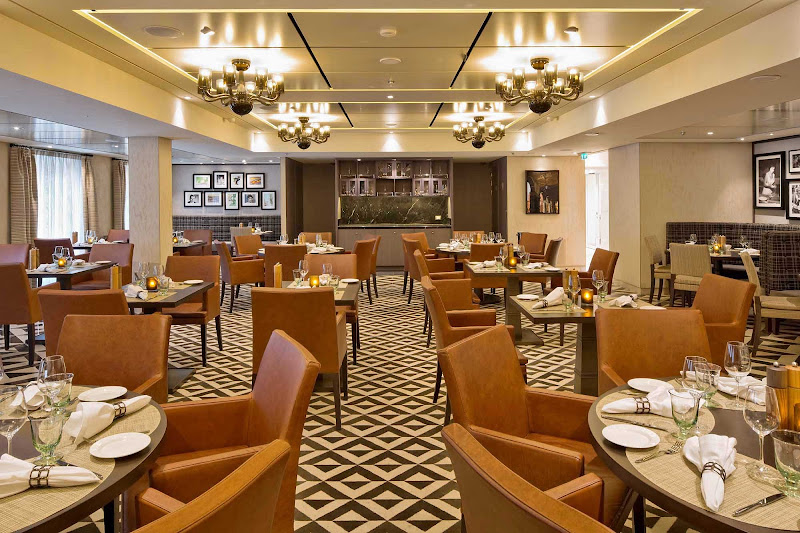 We wound up having dinner most nights at the World Café, given its informal vibe and wide-ranging variety of global cuisines and regional specialties. Have sushi, or a Scandinavian dish, or pizza, or that odd-looking Asian delicacy that you have to ask the name of. Cappuccino and espresso drinks are also available, gratis.

In the mood for a burger or salad? Head right outside the World Cafe's doors to the Pool Grill next to the ship's main pool.

We were impressed by our lone meal at Manfredi’s Italian Grill, and should have arranged a second dinner reservation. The restaurant offers a range of Tuscan and Roman dishes, but one of the best meals of the voyage was a succulent, finely seasoned rib-eye steak paired with a nice Bordeaux. (Just don't ask for a Cabernet Sauvignon. The wines are Euro-centric.) 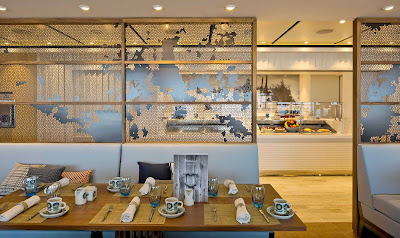 Courtesy of Viking CruisesMamsen's is a café on Viking Star that features Scandinavian fare.

Our most memorable meal came at The Chef's Table, where we lingered over a five-course dinner in a cozy, hushed room. The Chefs Table features theme dinners, and ours was "La Route Des Indes," with an emphasis on fresh regional spices. Our courses included Carrot and Cardamom Cream, with star anise; Spicy Tuna Tataki, with coriander and peppercorns; Ginger and Tarragon granita; Beef Tenderloin with paprika, cumin, coriander and cinnamon, and an apple tarte for dessert with butterscotch calvados sauce. Each course was exquisite.

We didn't pony up the extra $299 per person for dinner at The Kitchen Table, where a handful of guests accompany the chef into a market to select fresh, local ingredients to prepare for their dinner, held in a spartan room resembling a test kitchen. It's done once per cruise.

After a few days, we discovered Mamsen's on deck 7 forward in the Explorers' Lounge, and we knew we had found our breakfast spot. I loved the Norwegian waffles served with fresh fruit and berries (hold the cream) while taking in the view of the sea or a new port. Oatmeal, pastries and other fare are also on tap. It’s also open for lunch and after-dinner snacking. Mamsen's, inspired by the recipes of Viking founder Torstein Hagen's mother, remained a hidden gem throughout the voyage, never crowded and always mellow. 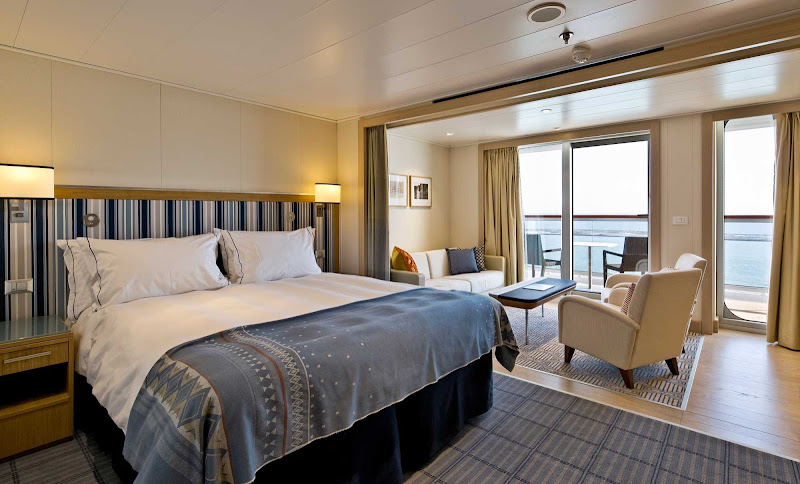 Courtesy of Viking CruisesConsider an upgrade to a Penthouse Junior Suite on Viking Star, especially if you're looking to take a longer cruise.

Viking Star features 14 Explorer Suites, which are two-room suites ranging from 757 to 1,163 square feet that offer sweeping views from wrap-around private verandas as well as additional amenities.All staterooms on Viking Star have their own private veranda (yes!). Guests can choose from five stateroom categories, starting from a 270-square-foot veranda stateroom. All staterooms come with king-size beds (convertible to doubles), roomy showers, robes, slippers, toiletries, a hair dryer and a safe.

We had a Deluxe Veranda (also 270 square feet) with a modest balcony, typical bed and a desk where I began writing this review. The complimentary movies on demand and TV stations (Fox, MSNBC, Sky News) on the 42-inch flat screen LCD TV were a nice touch, plus you could check the monitor to see the state of your bill. We also appreciated the fact that the loudspeaker system was used sparingly and the announcements weren't blaring.

During the day, guests wear casual attire. At night you'll see more sport coats and dresses. There are no formal nights on Viking Star.

First, the good news: Wi-fi is available throughout the ship, including your stateroom, and it’s free. Now, the bad news: Her VSAT satellite connection is woefully slow. In Istanbul I measured a download speed of 0.91 megabits per second and 0.44 mbps up. Sailing out of Ephesus, 0.31 mbps down, 0.04 mbps up. In Kotor, 0.73 mbps down, 0.24 up.

Translation: It took 20 minutes to upload a 15-second video to Instagram. Not the end of the world, but if you’re a techie like me, or a member of the always-on generation who likes to share experiences during a voyage, you may want to look for an Internet cafe in port and resign yourself to kicking back on board.

J.D. Lasica sailed on Viking Star, along with two other members of the press, as a guest of Viking Ocean Cruises. See Cruiseable's Ethics & disclosure policy.

Have you cruised on Viking Star? What was the highlight? I'd love to hear about your own experience in the comments below.

Help improve this article. See anything wrong? What did I overlook? Be a co-creator! 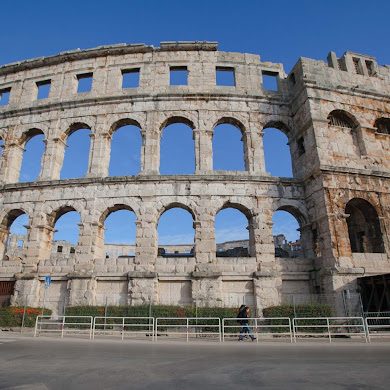 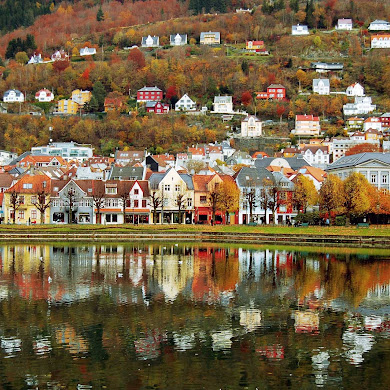 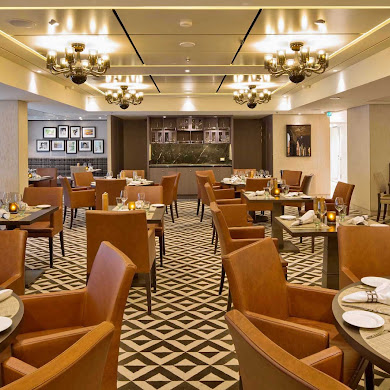 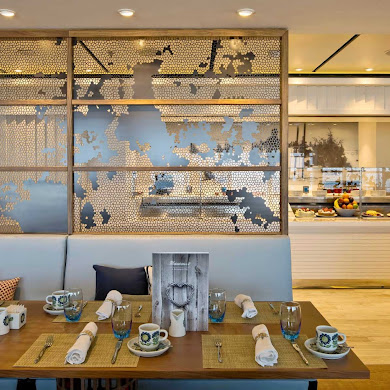 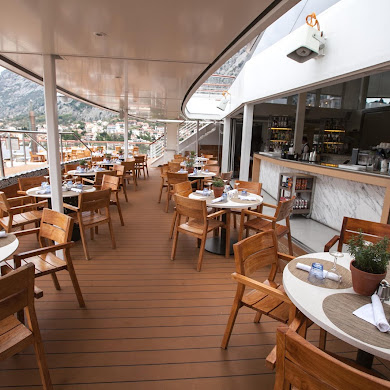