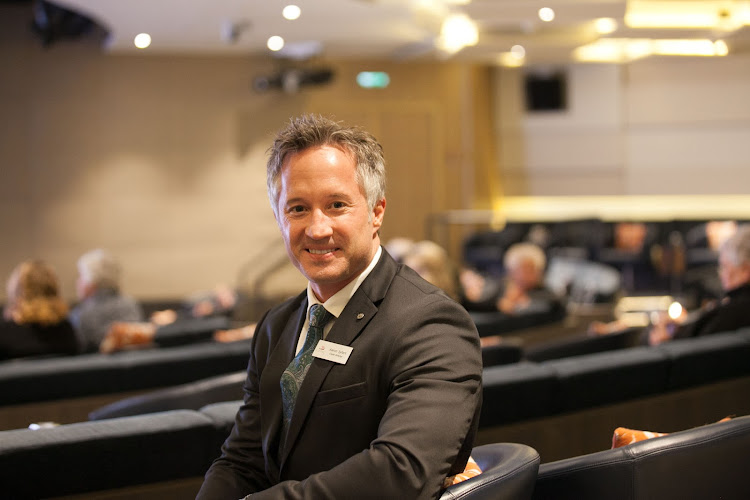 Behind the scenes with the crew of Viking Star: Part 3

During my 10-day cruise aboard Viking Star from Istanbul to Venice in November 2015, I interviewed six of the ship's crew members. (And here's my review of Viking Star.)

Here's my Q&A with Aaron Syfert, Viking Star's cruise director. We chatted for about 20 minutes in the Living Room of Viking Star.

Tell us about your role on Viking Star.

I'm the cruise director. And I think a better title would be director of entertainment. It’s any type of aspects of entertainment, any types of events, guests — anything we come up with for special occasions, holidays. That falls under my department.

As a cruise director, do you sort of owe anything to the folks who came before you? Do you model yourself after the John Healds of the world?

“I think almost all cruise directors have entertainment in their past, whether they're comedians or singers, dancers.”

I came into this round of entertainment because I was actually a baritone lead singer in shows on ships back in 2000, on Regent Cruise Line. Then back in 2006 I became an activities coordinator and learned under Barry Hopkins, who influenced what I was doing. Four years ago I went to Seabourn and I was able to do the thing I loved, to perform, and also assist the cruise director. After they sold three of their ships to Windstar I began to look for a change and ran into the right people at the right time. And Viking said I could perform here as well as run the entertainment department. This was actually a great, exciting new challenge to me, to actually run a large departent, full production casts, musiciains, resident musicians, schedule the different areas and come up with the ideas.

Sounds like you have a little bit of an entertainment gene.

I think almost all cruise directors have entertainment in their past, whether they're comedians or singers, dancers.

You’ve got to be a people person.

You do. You have to enjoy listening to the stories, put yourself out there all the time, be approachable. It is very important.

In some ways you're the face of Viking on the ship.

How do those announcements work on a daily basis?

Usually my morning announcement is the clearance call, so I let everyone know where the gangway is. I’ll talk about the weather a little bit. Maybe some information about the tours that are happening that day, any changes that might happen as well. Later that afternoon or evening I'll provide an update about any events that are happening.

We try to keep this a quiet ship, as opposed to a lot of other ships that do announcements all day long. It disrupts the atmosphere of the ship. We do a morning announcement, as well as anything serious that guests should know about. It's usually me or the captain throughout the cruise.

Tell us about the port talks you give.

This is something different for me, these port talks. We’ll do these lectures on the history/heritage/culture of those ports of call coming up. Those have been really fun to do because it gets me back up on the stage, which I love to do and it’s a different aspect of it. I am also the emcee of any events, any shows, anything we do in the Atrium.

Are you close to doing a performance on the cruise?

At this time, I have my own show, but we are just getting the band to learn it and on the last contract, they almost did, but then they had to leave, and we still had a few songs to do. But we do Atrium shows here, one called "Music of the Night," which is a little cabaret to introduce all the performers, and most of the time I will jump in to sing one of the numbers, a song with them. Tomorrow, we are doing "Unexpected Moment," and I will actually jump in and sing with them on that one.

Your production is musical theater, then.

It’s a little musical theater, it’s a little opera (which I studied in college), it’s a little country because I’m from Texas, because I have my Texas roots. So I do bring my guitar, I play my guitar in the middle of that. And a little pop, Michael Bublé, some pop and swing.

With all the people you've met over the months, tell us in general terms what kind of people go on Viking Star. 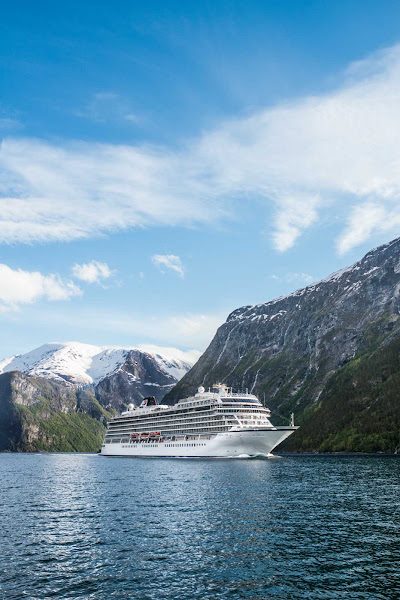 Courtesy of Viking Ocean CruisesViking Star in Flam, a village along a scenic 18-mile fjord in Norway — Syfert's favorite destination.

With the Viking Star, it is people looking for the destination, but also the enrichment. They are looking for exclusive ports of call. And the ability to stay longer than a lot of the other ships. That is one of the missions of Viking Star, and of Viking Ocean Cruises. They are trying to model a little bit off of the river boats, I believe, because that is one thing they were very known for: the ability to stay in those ports for a longer time.

But the enrichment program is a big thing here. They do a great job interviewing and hiring the speakers. I think guests come to the theater often for the enrichment sessions and they have a lot of great comments about the wonderful speakers we get. So I think that was one of the main focuses when we first started. Of course, entertainment is right up there, too. We didn’t know it would be so popular with our guests, but the ratings are showing they are.

Do you get off the ship when we arrive in port?

I try to. I’ve been doing this on various ships for almost 12, 13 years. So I’ve seen most all these places we’ve gone to. But there are certain little places, especially in Norway. In Florø I love to hike up the hillsides and ride the bike down. I love going through the fjords, the scenic sailing and walking around the ship and watching some of the nature around us.

Over the years I've also loved visiting South America, some of the excursions were amazing there — going horseback riding in Ushuaia, Argentina, or whitewater rafting in Chile. In Spain we are able to pull right onto the dock and just walk around areas like Cadiz or Barcelona.

With Viking's new ocean ships coming out in 2016, are you going to be involved with that?

Yes, I finish here Jan. 10, then I take a month off, then I go to help launch the next ship, Viking Sea.

When you walk around the ship, are you trying to meet people to see how they are doing?

When I walk around and talk to people I want to see how  their cruise is going, what they are doing on the ship so far, what things we can help them with. What things we can change. We try to act on feedback as quickly as possible, so we change things on their cruise, while there are other things we present to the company to be implemented later.

What's the best thing about your job?
Meeting the people. Hearing the stories. We're creating an event, and having them come up to you with a big smile and telling you how much they enjoyed it. Something we may have put on a lecture or a port talk and they say how informative it was. Or a show, when they come out and you shake hands and they tell you it was one of the best shows they have ever seen. It is something they will remember. I like to call it their Viking Moment, a memory they will take with them and cherish always. That’s what the best part of work is for me.