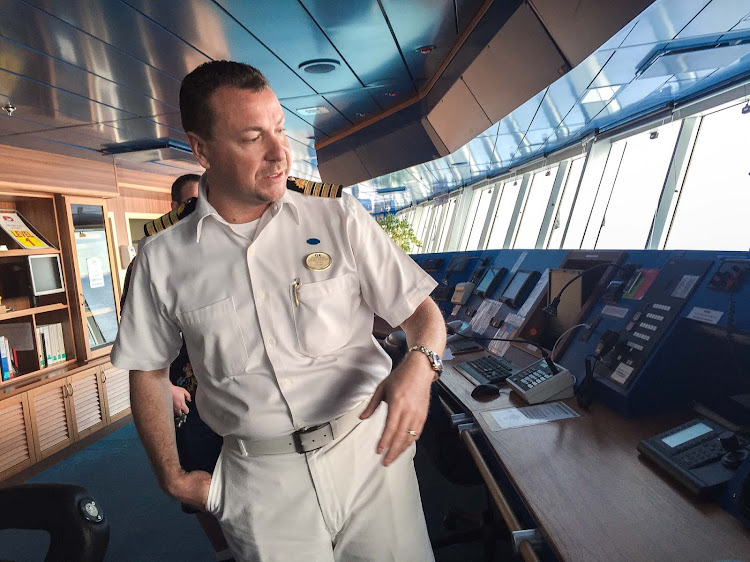 Captain Craig Street, on the bridge of Ruby Princess, described what goes into operating and navigating a modern cruise ship.

On the bridge with the captain of Ruby Princess

On my recent cruise on Ruby Princess, I was invited onto the bridge and got to interview the ship captain, Craig Street, who told our group about navigating a modern cruise ship, spying the launch of an ICBM missile and the time he piloted a Princess ship that rescued a passenger who jumped overboard. 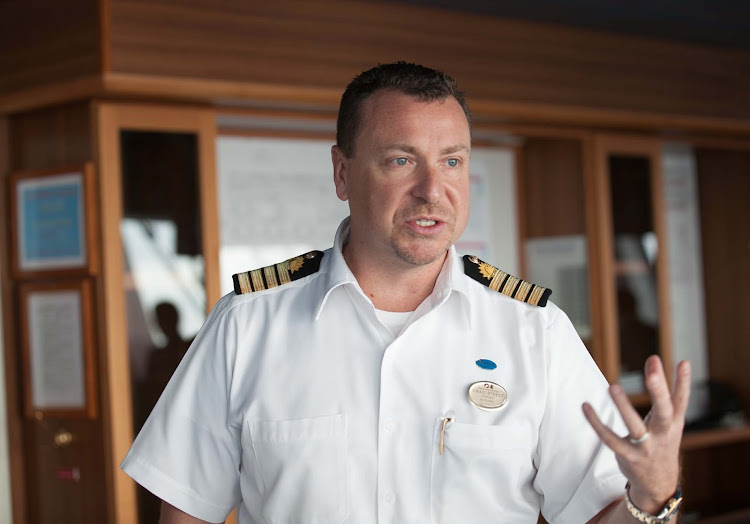 JD Lasica / Special to CruiseableCapt. Craig Street talked about a recent ICBM missile sighting at sea: "It was like nothing I'd ever seen before. ... All these reports were coming in — the Kardashians were tweeting about a UFO."

JD Lasica: Ruby Princess is quite a beautiful ship. Thanks for having us on the bridge.

Craig Street: Certainly. The first thing you should know as you walk around the bridge is, everything is live up here. So don't be tempted to push any buttons or pull any levers.

We're on a course toward Puerto Vallarta. How fast are we traveling?

At about 21 1/2 knots, which is about 23 miles per hour. We're doing some testing with the engines, so you may hear some voices. We have a direct link to the Control Room, so we're always speaking with them. And we're doing some routine fire alarm testing, so if you hear some alarms going off, don't be too concerned.

What can you tell us about the engines?

We have very powerful side thrusters, three at the bow and three at the stern. We have 9,000 horsepower forward, and very large 18-foot propellers, and we have a gyroscope that instructs the stabilizers to counteract the waves and stop the ship from rolling.

We saw a helicopter hovering overhead, what was that about?

“We're like a big magnet. When we get close to shore, we tend to attract a lot of boats that like to come close and take photos.”

It was just a tourist helicopter out of Cabo, nothing to be worried about. We're like a big magnet. When we get close to shore, we tend to attract a lot of boats that like to come close and take photos.

Is this the navigation panel?

Don't be disappointed, but gone are the days when we have a big wooden wheel to steer the ship. (He points.) Here's the main steering column, and here are the indications for the two rudders. There are times we'll do manual steering, and the officer will be told what angle to put the rudders at, or what course to steer according to the gyro. It's very important to pay attention to the rate of turn indicator to prevent the ship from turning too fast, otherwise you'll start to list. (Points again.) And literally, the ship is being driven by a small joystick.

How does a ship like this steer clear of other vessels?

These little triangles here are called AIS, Automatic Identification Systems. Every ship is required to have one, even smaller ships like yachts now tend to have them. That's sending out a signal that we can interrogate. It'll tell us exactly what type of ship it is, how many persons on board, where it's going, what course it's steering and what speed it's doing.

How does the system know how many passengers are on board Ruby Princess?

As we leave Los Angeles, we have to manually input the information and update our status from 'moored' to 'underway.' if you're in pirate areas, you're allowed to turn it off in certain situations, and warships never send them out, but other than that, you just leave it on.

So what is that ship on the horizon?

Have you seen some unusual things out there?

About two months ago we were off the coast of Ensenada on our way to Los Angeles, and in the night sky we saw a bright flare go up ahead of the ship. We called the San Diego Coast Guard to report it, and we were approaching a military exercise area. And they confirmed that it was an ICBM missile test.

That made the news — sightings of a green object.

It was like nothing I'd ever seen before. It was 80 miles away from us, and of course they don't give you any warning. I googled it a half hour later and all these reports were coming in — the Kardashians were tweeting about a UFO. You could see it as far as Nevada. It made the BBC News the next day.

Have you taken part in any rescues at sea?

About a year ago we were about an hour out of Jakarta, Indonesia, and a young Chinese passenger jumped over the side from deck 14. We turned the ship around and found him. I was surprised he survived the fall from deck 14, and we picked him up with one of the rescue boats. And we checked him into the medical center and kept an eye on him and discharged him at the next port. He was lucky to be found, especially in the dark.

Tell us more about the ship. What about some of the water systems on board?

We're very self-sufficient. When we go to Hawaii, and when we return, we have five days at sea. We carry just over 3,000 tons of water, and we use roughly 1,000 tons a day. We have three evaporators on board, and we recycle everything on the ship as much as we can. We also have a reverse osmosis plant on board that makes about 450 tons of water per day. 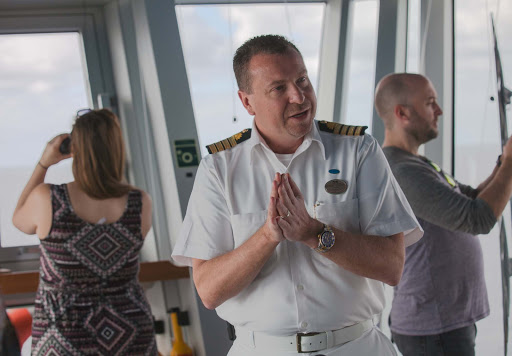 JD Lasica / Special to CruiseableCaptain Craig Street: "We had a wedding yesterday, so I married a young couple from Alaska on the back deck with 37 guests."

How long have you been in the cruise business?

Do you tend to stay on board or go into port?

Unless my wife is along, I don't go too far. When we're in port, either myself or the staff captain has to be on board, in case we have a situation or an emergency.

I love Venice. I just love the Grand Canal. My wife's never been and I'm taking her this week.

I met her on the Caribbean Princess about 11 years ago. She was one of the scuba diving instructors.

She's Canadian. We live in Scotland. We have a small place there, and we pop over to see friends now and then, otherwise I'm on a Princess. I was on Sapphire Princess for the past 18 months. Spent a lot of time off Shanghai and Singapore, two of the busiest ports in the world. Generally we do three months, two months off the ship. On Sapphire we did six weeks on, five weeks off. It gets stressful otherwise in a busy area like that.

Do you interact with passengers? What do you talk about?

We had a wedding yesterday, so I married a young couple from Alaska on the back deck with 37 guests. And I helped coach some of the passengers trying out for "Voice of the Ocean." On the longer cruises we do a Liars game where we come up with explanations and passengers have to guess if you're telling the truth. That's a fun part of the job.

What's the best part of being captain?

Something new every day. I originally intended to do three years as a cadet and go back to the university, but it's been interesting enough that 25 years later I'm still here. Really, you're a ship manager nowadays. You have ship directors reporting to you: the hotel manager, the staff captain, the chief engineer. I don't pretend to know everything that's going on in the ship, but I'm responsible for all of it.