Athens travel guide: What to do & see

It’s hard to pinpoint the one thing that makes Athens so attractive. It’s not just a museum or an olive tree or a local tavern; it’s a vibrant and contemporary city with a rich past. The three-acre pedestrian mall in the city’s historic center lies in the shadow of the Acropolis. Hadrian’s Arch; the theater of Dionysus, where works by Sophocles, Euripides, Aeschylus and Aristophanes were performed; and the new Acropolis Museum are just some of what you’ll see here. 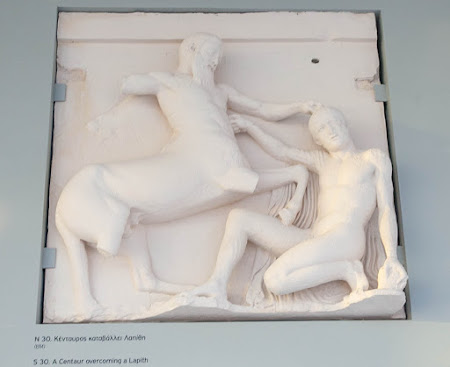 JD Lasica / Special to CruiseableA stone relief at the Acropolis Museum in Athens: "A Centaur overcoming a Lapith."

Although Athens is a modern city,  the history and antiquity of Greece is not entirely forgotten here. The city is home to many places that recall Greece's achievements in science, sport, architecture, and art during the Classical Age. It boasts relics from the Greek, Roman and Byzantine periods. Athens holds some of the most important antiquities of ancient civilization and produced some of the greatest philosophers not just of their times, but in history.

To visitors, Athens is an exciting, bustling city filled with shops, cafés, monuments, and character. Although pollution and traffic do add to the grit of the city — think New York's traffic jams and Los Angeles' air quality — the energetic tourist will find plenty of opportunities for sightseeing.

Cruise lines that call on Athens 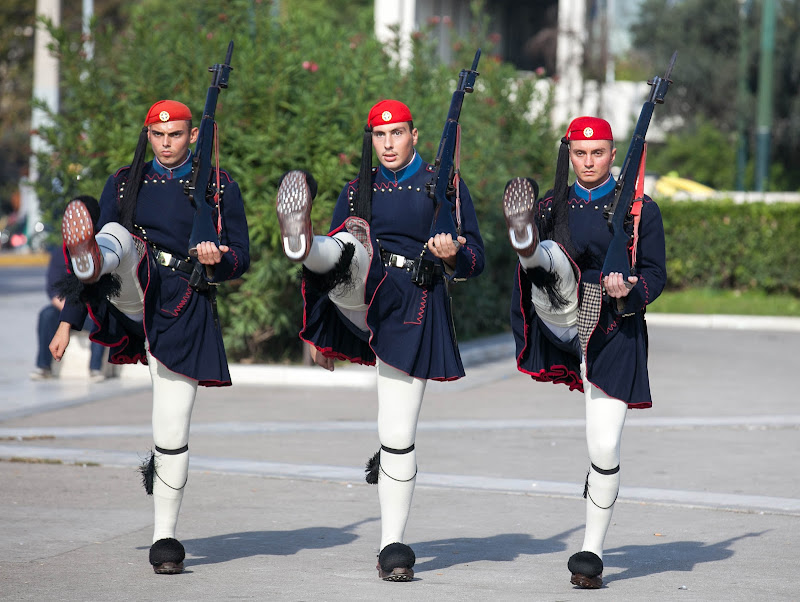 JD Lasica / Special to CruiseableThe Evzones' Changing of the Guard ceremony in Athens takes place on the hour 24 times a day.

Top things to do & see in Athens

The most famous tourist attraction in Athens is the Acropolis (210-321-0291), or the High City. It is the most stunning evidence of the golden age of ancient Greece. The Parthenon towers at the Acropolis as the most spectacular sacred shrine to ancient Greek gods and goddesses. Between 500 and 400 B.C., Athens was a dizzying place of intellect and art, and this limestone protrusion stood at the center of it all. Over the years, it has withstood war and various abuses, but it remains an architectural gem.

As the history of Athens runs deep, so do the museums linking it to its history. Visit the National Archaeological Museum (210-821-7717) located at Odos Patission 44, for a wonderful lesson on the history of Greek culture as well as the ongoing processes of archaeological digs in the area. The Museum of Greek Folk Art (Kydatvineon 17, 210-322-9031) displays interesting pieces of popular art and crafts, especially from the 18th and 19th centuries. And the Agora Museum (210-321-0185) near the ancient Agora, is in the restored Stoa of Attalos, built in 150 B.C. 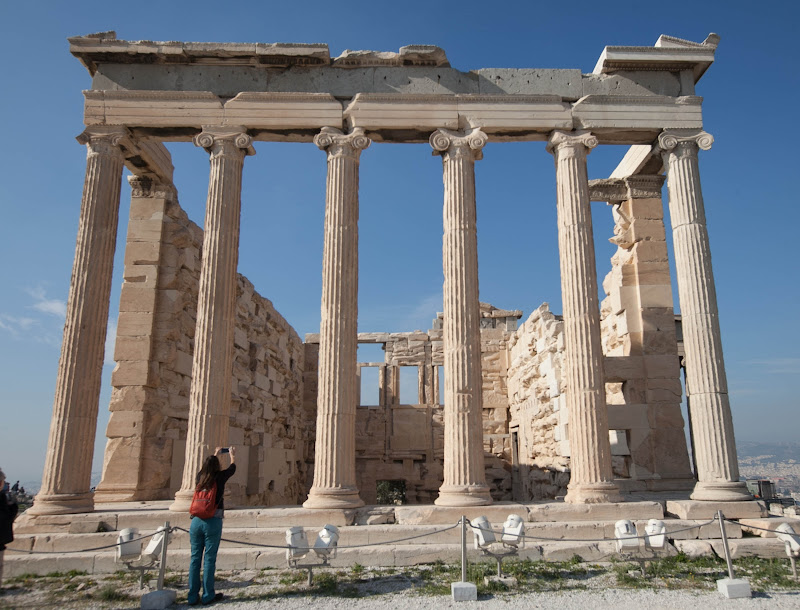 JD Lasica / Special to CruiseableThe Erechtheion or Erechtheum, an ancient Greek temple on the north side of the Acropolis in Athens dedicated to Athena and Poseidon.

The National Gardens (adjacent to Syntagma Square, 210-721-5019) offer a respite from the city's commotion. Once serving as the private gardens for the royal family, they are a perfectly scenic place to walk or picnic. Here you will find a pond with ducks and swans, lush grass and foliage, park benches and tables, along with a café. However, the National Gardens are only recommended during the daytime, as loiterers tend to hang out here at night.

If you are lucky enough to travel to Athens in the summer months, you may catch the Hellenic Festival. It is an annual celebration of the arts, complete with music, drama, and dance, that boasts artists from around the world who come and perform on the slopes of the Acropolis. Buy tickets early online because they sell out quickly.

Shopping is a citywide affair in Athens. In the popular Omonia, Syntagma, and Monastiraki squares of Central Athens, you will find a plethora of stores from department stores to tiny specialty boutiques (like Nick's Corner, home of the heavy-knit sweater, Pandrossou 48, Monastiraki, 210-321-2990). The posh Kolonaki section is where you will find Versace and Lagerfeld boutiques side by side with local couture designers. If you're more into food, the Central Market (Odos Athinas) will entice you with vegetables, meats, wines and cheeses from all over Greece and greater Europe. If sweets are your sin, then Aristokratikon (Karagiorgi Servias 9, near Syntagma Square, 210/322-0546) will delight you with its chocolates, truffles, and glazed nuts. 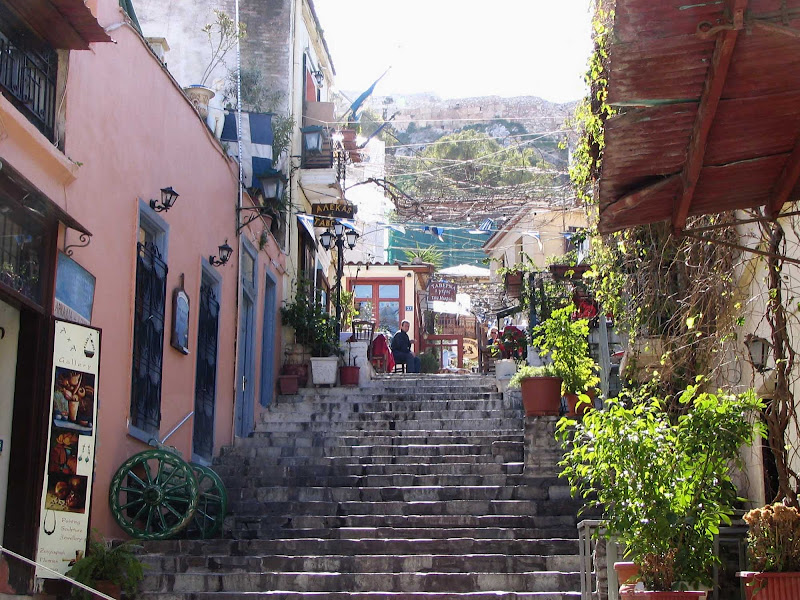 Javier Novo Rodríguez / Creative Commons BY-SAThe Plaka, the neoclassical region clustered around the northern and eastern slopes of the Acropolis in Athens, Greece.

Athens is for food lovers, whether it’s Michelin-star restaurants serving Mediterranean cuisine or casual restaurants serving spit-roasted souvlaki. Leisurely dining is a staple of Athenian cuisine. You are encouraged to stay long, order plenty, and enjoy Greek food to the fullest. You may find that quaint, hole-in-the-wall taverns offer a certain local charm and impressive meals, but Athens also offers its fair share of glamour.

After you have shopped in the Kolonaki area, head over to L'Abreuvoir (Xenokratous 51, 210-722-9106) for international cuisine, but make reservations first and be ready to shell out plenty for the spinach tart or fresh swordfish you are sure to enjoy. Traditional Greek food can be found at the oldest restaurant in the city's center, Ideal (Panepistimiou 46, 210-330-3000). This is a comfortable place where the fried mussels are fresh and the atmosphere is relaxed and casual. Vassilenas (Etolikou 72, 210/461-2457) is a humble yet delicious family-run tavern where the emphasis is on quality, not glitz. Locals revere this place and tourists delight in the low-cost menu where you can justify ordering many tasty dishes because the prices are so low.

Spring, early summer and fall are the best times to visit in order to avoid the heat and crowds of July and August. (It was 105 degrees F when we visited in July.) 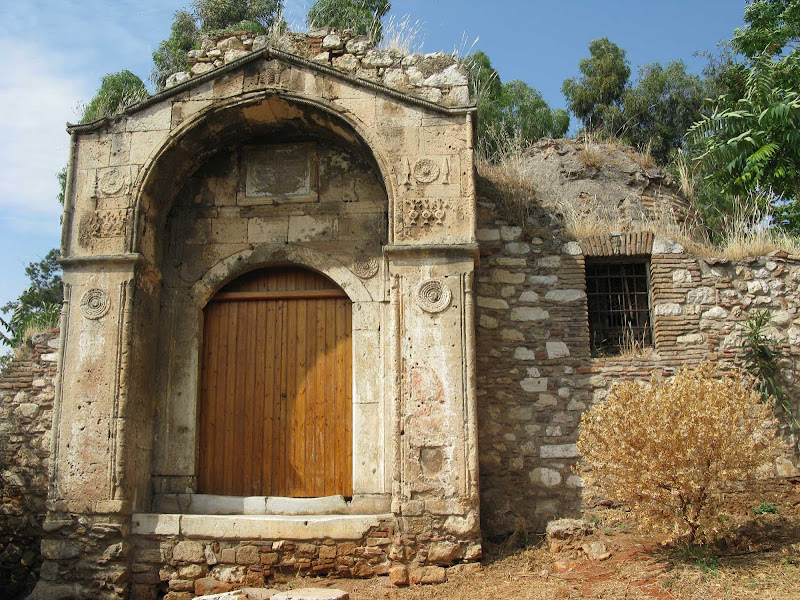 The port of Piraeus is located 6 miles (10 kilometers) west of the city center of Athens and is a town on its own. The New Passenger Terminal is located about 1 mile outside of the center of Piraeus. With 11 berthing places it’s one of the largest ports in the Mediterranean. Piraeus itself has not much to offer for tourists. When you dock, look for shuttles to the Metro, which takes you into the central area of Athens. It's a 15-minute ride on the metro to the central part of the city. It is a great place to catch a cab, as well.

Once you arrive near the Acropolis, Athens is relatively easy to walk. However, if you want to take a taxy, official taxis in Athens and Piraeus are marked with the word “Taxi” on a white background. Tourists are encouraged to bargain with avaricious taxi drivers who sometimes offer only a flat (and more costly) rate. If that happens, you can demand the meter turned on, and if the driver will not, simply hail another cab, which will likely be cheaper.

Buses and trolleys are inexpensive, but the service has been described as undependable and daunting. They can be a cheap way to get out to the suburbs of Athens if you have the time to plan a bus itinerary and are not on a deadline to arrive

Store  hours: Opening hours can vary drastically. General stores are open from 9 am-1:30 pm and again from 5 pm-9 pm Monday to Saturday. Tourist shops and convenience stores have longer opening hours, especially in high tourist season in the European summer.

Tipping:  In restaurants and taxis you can tip between 5% and 10%. Some restaurants will round-up the bill, so you should check this before tipping. Also you can expect a ‘service charge’ or a ‘cover charge’, which is the price of bread and water.

Safety:  Athens and Piraeus are considered safe cities overall. As always, be aware of your surroundings and lock up your valuables. Especially in large tourist areas, keep your wallets and purses close and beware of pickpockets.

Have you been to Athens? Tell us about your experience in the comments below.

“At the top of Lykavittos Hill, the highest point in Athens, is a chapel with views of the city and the Acropolis. It's well worth the hike to the top.”

“Prices have dropped, but the Greek debt crisis has not dampened Athens’s thriving arts scene. Recent years have seen a surge of galleries, collectives and nonprofit art organizations built for leaner times, like Radio Athènes, which hosts pop-up lectures and performances.”