You know before you go that this city of islands and canals is like no other. But not until you see with your own eyes (and smell with your own nose) can you appreciate the sublime colors, exquisite (if crumbling) architecture and the dense mantle of history that sits upon a city that reached its peak as a world economic and maritime power more than 700 years ago. Whew, just thinking about the fact that Marco Polo slept here is almost too much to digest.

The tourist hoards can be almost too much to digest, too, at least in summer, when congestion can almost — but never quite — get in the way of the magic. For cruise passengers, this is a city that deserves a pre- or post-trip stay of several days. The best way to explore it is to get up early, walk and walk some more. Explore the tourist spots, yes, but also explore the neighborhoods where laundry hangs from lines suspended over narrow alleyways, children play on picturesque bridges, restaurant menus are only in Italian and the imagination meanders through centuries.

There's history here to absorb in spades. Venetian merchants built a maritime empire on the city's 117 islets in the fifth and sixth centuries and ruled the Adriatic for 500 years. Venetian businessmen traded with India, China and Persia for valuable jewels, fabrics, spices and goods. The tradition of discovering rare finds carries on to this day.

Learning to use Venice’s public transportation is an adventure in itself, and a gondola ride is a pricey “must.” Just please, take my word for it: if you hire a crooner (yes, that’s what they’re called), try to get him (or her) to sing something besides “Santa Lucia” or “O sole mio,” which have little to do with Venice.

Cruise lines that call on Venice

Major cruise lines that call on Venice include:

Sonia Gil of Sonia Travels gets wonderfully lost in San Polo in the heart of Venice.

Top things to do & see in Venice

Venice’s inky black boats are the most universally recognized watercraft in the world. They’re also a taken-for-granted part of Venetian life, like cable cars in San Francisco. Those in operation now are only for the tourist trade, but their traditions are centuries old. Expect to spend around 100 euros or about $120 (plus tip) for a 45-minute ride for up to six people at sunset or after dark. Daytime rides are about 20 percent cheaper.

By custom and tradition, all gondoliers over the centuries have been men. As one dashing young man of the trade succinctly explained to me in 2004: “The pope will be a woman before a gondolier is a woman. But the woman is allowed to sing.” There’s a surprise ending to that story: Venice got its first woman gondolier in 2010. 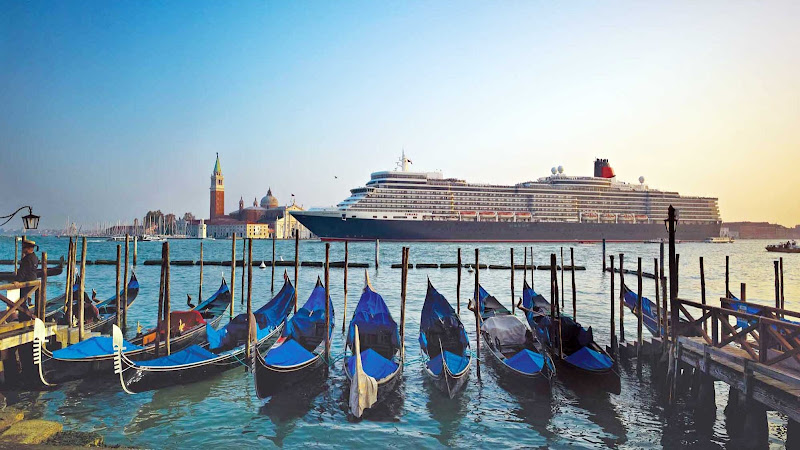 Your cruise line will probably offer a walking tour as an option; if not, spring for one on your own to get some insight (and skip the entry lines) at Piazza San Marco, the Doge’s Palace, the Peggy Guggenheim Museum and other A-list historical and architectural attractions. Many themed tours are available, from photo walks to culinary excursions. These days, many tour operators provide headsets so that all participants can hear the guide without straining. A special note: Tour guides in Italy must be licensed, and the criteria for obtaining the credential is very involved. They really know their stuff! Many boat tours also are available, offering an entirely different perspective.

Say yes to the city’s highlights

Piazza San Marco is the city’s largest, most-visited square, and houses the Basilica di San Marco as well as the clock tower, Doge’s Palace and Procuratie Vecchie, whose ground floor is occupied by shops and cafes. Dotted with myriad churches and museums, such as San Giovanni e Paolo, Museo Ebraico (Jewish Museum), Galleria dell’Accademia di Venzia and the Peggy Guggenheim Museum, Venice shines as a cultural epicenter within Europe and the world.

Cross the canal in a traghetto

Traghetti (the plural of traghetto) are gondola ferries that cross the Grand Canal at seven points where there are no bridges. Sans velvet cushions and other adornments, and larger than standard gondolas, the vessels are manned by two gondoliers, one in front, one in back. Venetians do the one-minute crossings standing up. Fare is 2 euros; follow the lead of other passengers and either hand your coins to the gondolier or set them on the deck as you board. Routes are clearly marked on street maps. Buy your pass from an agent or at the Hellovenezia/ACTV office at the Piazzale Roma, where there’s a ticket counter inside the building.

More than 70 named islands, some inhabited, some in private or monastic hands, some housing sizable communities, dot the Venetian Lagoon. Most popular with tourists are Murano, where the famous glass is made; and Burano, home to lace shops and a wealth of extravagantly colorful houses. Both islands, along with the haunting isle of Torcello, can be visited on a half-day motorboat sightseeing tour, but be forewarned that you’ll be pressured into buying expensive gewgaws. An option is to go on your own taking public transportation.

Your best day in Venice may be the one in which you have no expectations and make no plans. Yes, you’ll be totally vulnerable to Stendhal syndrome — a psychosomatic disorder that causes rapid heartbeat and dizziness when confronted with an abundance of beauty or art. Just go with the flow; you’ll be glad you did.

This is your chance to listen to music in Venice, an experience not to be missed. To find some music coming from venues other than gondola crooners, check out Teatro La Fenice for epic opera, Al Vapore for jazz and blues, Terrazzamare by the beach or Laboratorio Occupato Morion for local Veneto bands in a dive bar setting.

Hire a classic motor launch and make like James Bond as you tour the canals of Venice. 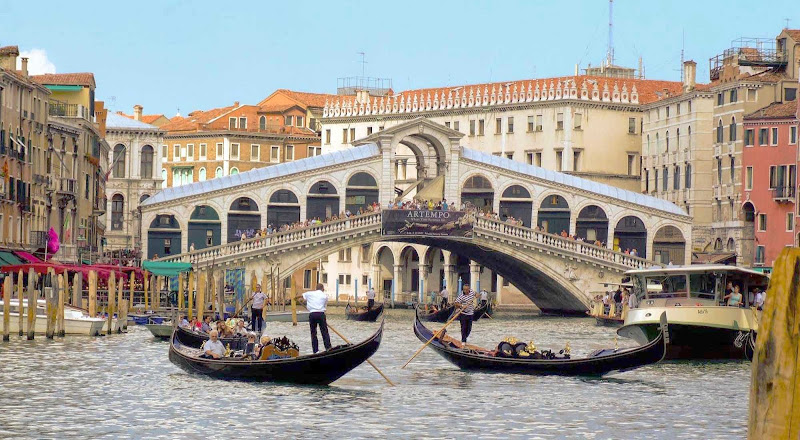 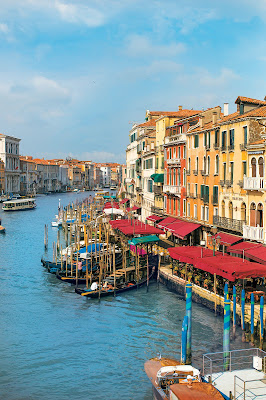 Courtesy of Paul Gauguin CruisesCafés, hotels and homes along the Grand Canal of Venice.

In Venice, you can have a variety of culinary experiences. There’s the quintessential candlelit dinner by the canal, the hole-in-the-wall joint serving fresh handmade pasta, the sidewalk café serving pizza or the upscale restaurant that prepares local specialties such as cuttlefish, gnocchi or squid in its ink. While maybe not getting the most accolades for dining in Italy, Venetian cuisine is nothing to scoff at. To eat cheaply, wander out of the Centro Storico, or historic district, to a residential neighborhood and eat where the locals eat. Three-course, set-price menus usually offer good value.

Some places to put on your radar: The hidden-away Taverna del Campiello Remer offers a high-value lunch buffet and happy hour in a romantic setting. San Trovaso is one of many no-frills venues offering a daily tourist menu along with pizza and other traditional Italian and Venetian dishes. On the high end of the scale, Harry’s Dolci, run by the Hotel Cipriani, is, according to Zagat, a “Harry’s Bar” spin-off with better food. Corte Sconta, Al Artisti and Alle Testiere are among the city’s best.

Venice has a humid subtropical climate with cool winters and very warm summers. July is the year’s hottest month, with an average high temperature of 81.5° F (27.5° C). Winters can get quite cool, with breezes coming off of the water and average lows of 42.4° F (5.8° C). The best time to visit Venice is during the spring and autumn months. Stay away, if you can, in July and August, which are hot, humid and congested. Acque alte, or high tides, occur from November to April and often flood low-lying areas of the city, including the historic center. Fortunately, most last only a few hours.

Chances are the better the time of year, the more people that will visit along with you. Though you might not have Venice all to yourself, the city becomes incredibly personal once your first memory is made here. 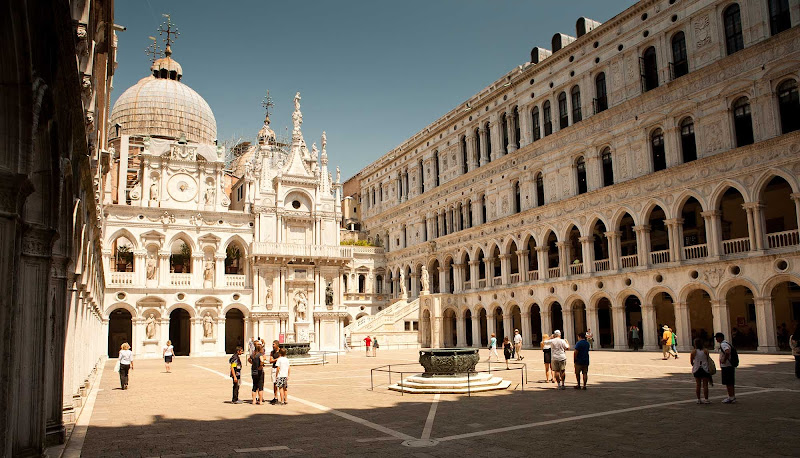 Aurimas / Creative Commons BY-NDThe Doge's Palace, one of the most recognizable landmarks in Venice.

The Venezia Terminali Passeggeri or Venice cruise ship terminal, is near a causeway linking the historic city with the mainland. Most ships get a close-in berth in the Stazione Marittima, from where shuttle buses and taxis travel to the Piazzele Roma. From there, visitors can walk into the city over a bridge or travel by boat. An alternate means of transportation from the port to the Piazzele Roma is the People Mover, an automated tram. Water taxis, and water buses offer more expensive transportation solutions.

The closest airport is Marco Polo Airport (VCE) on the mainland near the city of Mestre. Sixteen miles from Venice is the relatively small airport, Treviso (TSF), though it mainly serves domestic flights. Airport buses arrive at and depart from the Piazzele Roma. For about 100 euros, you can travel by water taxi.

You have two choices: By foot or by water. Gondolas, water buses and water taxis will take visitors up and down the canal-riddled archipelago, while the inner parts of the city are highly walkable.

Considering that a ride on a water bus, or vaporetto, will set you back about $10, a Venezia Unica tourist travel card can be a good investment. Unlimited rides on vaporetti and mainland buses can be purchased in increments of one to seven days for 20 to 60 euros. One small piece of luggage is included, and a 4-euro surcharge will get you to or from the airport. The Rolling Venice card for youth ages 14-29 is good for three days and costs 20 euros. The Tourist City Pass, 40 euros for a week, less for youth and children, saves 28 percent on the cost of admission to many museums and churches and includes priority-line privileges at some sites. Another option is the Chorus Pass, which covers entry into 16 churches renowned for art and architecture. 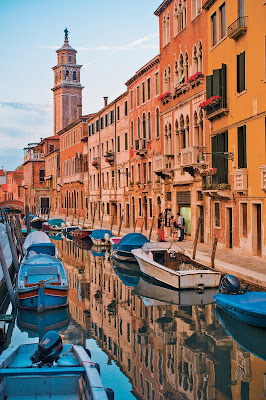 Courtesy of Paul Gauguin CruisesA painterly scene of Venice at dusk. The City of Canals is one of the destinations on a Tere Moana cruise.

Language: Italian and Veneziano, the local dialect. English is spoken at most establishments catering to tourists.

Store hours: Stores in Venice are typically open from 10 am to about 6 pm Monday to Saturday. You will find many stores and attractions closed on Sunday outside of the main tourist areas.

Tipping: Tipping in Venice, like all of Europe, is not expected. At a restaurant you can round up the bill slightly with a few coins.

Currency: The euro. Most major credit cards (with the exception of American Express) are widely accepted.

Safety: Venice is overall considered a safe city. That said, be aware of potential pickpockets, especially in the crowded tourist areas, and keep your valuables locked up on the ship. Don't wear flashy jewelry and don't keep your iPhone in your back pocket. It's also worth noting that Venice is full of stairs, canals, bridges and cobblestones, which means you should pay special attention to your footwear. Comfortable walking shoes are a must. Those strappy heels may look good, but it's easy to twist an ankle on challenging surfaces if your shoes aren't really made for walking.

ShoreFox and Wikitravel contributed to this review.

Have you been to Venice? Please share a story, tip or discovery. What was the highlight? I've love to know!

“At aperitivo hour, fight your way to the cramped marble counter of Polpette, the beloved old osteria at Trattoria Ca' d'Oro alla Vedova hidden off Strada Nuova. The reward is the city's ultimate meatball: crispy on the outside, juicy shredded pork inside.”