Dubrovnik travel guide: What to do & see

The extraordinary beauty of Dubrovnik, "city made of stone and light," has inspired countless poetic exclamations. A beautiful walled city of cobblestone streets, dramatic stone ramparts, fortresses and medieval buildings with orange-tiled roofs, Dubrovnik is also a place to enjoy such Mediterranean pleasures as outdoor cafes, beaches and water sports. No wonder it’s a favorite port of call for cruise ships on Mediterranean itineraries — as well as the setting for King’s Landing on “Game of Thrones.”

Dubrovnik's Adriatic waters show off perfect shades of blue, and  sunsets are wild as seen from atop 14th-century city walls. Little wonder that in 1979, the Dubrovnik was listed as a UNESCO World Heritage Site.

Cruise lines that call on Dubrovnik

Here are the major cruise lines with ships that call on Dubrovnik:

Top things to do & see in Dubrovnik

Looking for the right mix of culture, history and a bit of the commercial to keep you grounded? The walled Stari Grad, or Old Town, is the answer. The main street here, referred to as both the Placa and the Stradun, runs from the Pile Gate to the Old Port at the tip of the peninsula. 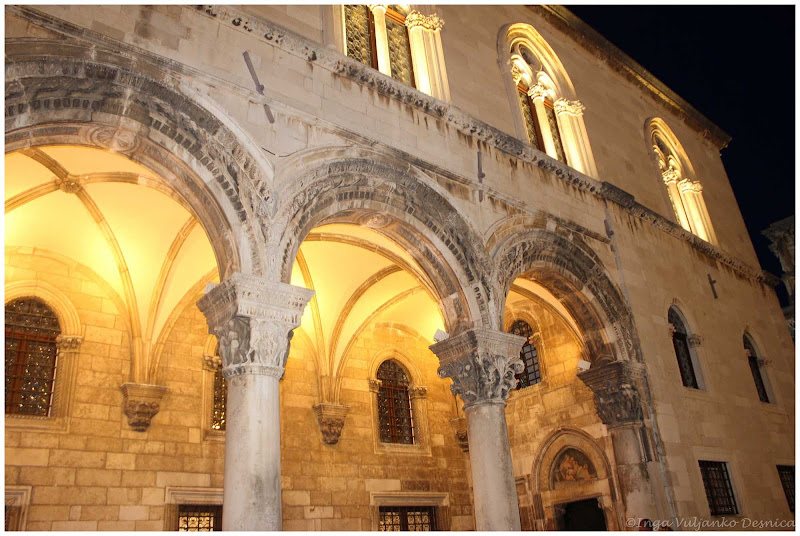 The walled city is filled with medieval sites to explore, including the 14th-century Franciscan Monastery and adjoining pharmacy, dating to 1317 and considered among the oldest in the world. Other highlights include the Rector’s Palace, a 15th-century Gothic-Renaissance governmental building that is now a museum; and the 15th-century Synagogue, the second oldest Sephardic synagogue in Europe. Another Renaissance highlight is the Sponza Palace, which dates from the 16th century and is currently used to house the National Archives. The St. Saviour Church is another remnant of the Renaissance period, and is located next to the Franciscan Monastery.

Stairways enable visitors to walk along the stone walls encircling the city, affording great views of the red-tiled buildings and the sea below.

Just east of the Old City, the waterfront Museum of Modern Art is the place to see work by major Croatian artists.

Excursion boats leave from the harbor to the medieval town of Cavtat and its beach area on the Rat peninsula.

Dubronik offers many places for soaking up the sun and enjoying a swim in the Adriatic, though you won't find Caribbean-style sandy beaches here. Best bets include pebble beach Banje, Dubrovnik's main public beach that's a short walk from the Old City. There is also Copacabana Beach, a small stony beach that's part of the Elaphiti Islands. 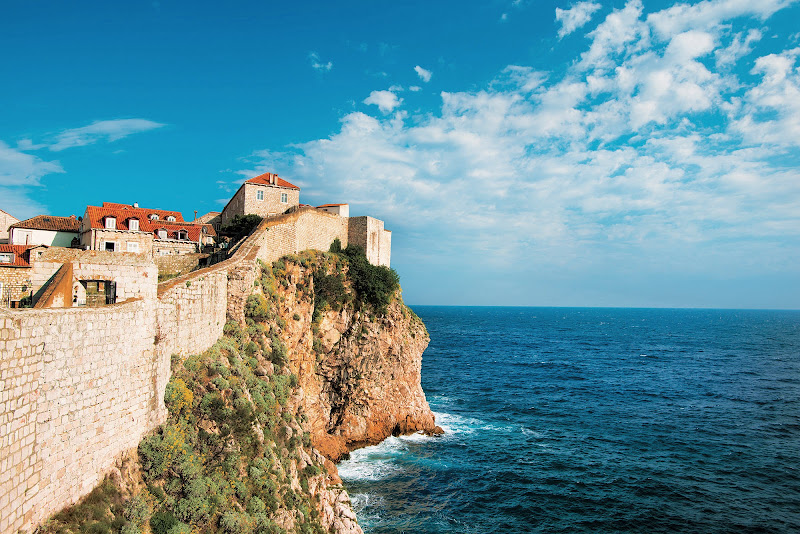 Lokum Island, a short ferry ride from the Old Harbor in the bay of Dubrovnik, is a wooded island that contains a beach, a fortress, a botanical garden and a monastery.

Many cruise lines offer kayaking tours that include the chance to paddle alongside the Old City walls and stop for a swim in a secluded cave.

Locally made lace, hand-carved wooden toys, jewelry and watercolors are among the items to look for.

The annual Dubrovnik Summer Festival runs from mid-July to late August and attracts thousands of artists from around the world. Concerts, games and theatrical performances take over the city.

Many cruise lines offer a Taste of Croatia tour, which will include the chance to taste local wines, visit with a local family and have a lunch of typical Croatian foods.

Located in the medieval Fort of St. John, the Dubrovnik Aquarium has exhibits devoted to the marine life of the Adriatic. The adjacent Dubrovnik Maritime Museum is filled with artifacts pertaining to the history of this ancient port city.

Fish Restaurant Proto is a high-end seafood restaurant serving traditional Croatian dishes on a covered rooftop patio in the center of Old Town. Another good local seafood in the Old City is Kamenice, known for its fresh oysters and platters of fried calamari. Just outside the city walls and next to the central fish market, Lokanda Peskarija serves many of its dishes in traditional black pots. A good seafood eatery is Atlas Club Nautika, located in the renovated 1800s Nautika Academy. In the Gruz Harbor area, Taverna Otto (in Croatian) is known for its Mediterranean dishes prepared with fresh ingredients.

A newcomer receiving raves in Old Town is Portrait, an Adriatic gourmet journey. Pergola has a knack for making perfect gnocchi. In the mood for vegetarian? Try Chinese Restaurant Shanghai. Want casual? Try The Sesame Tavern, which specializes in Dalmatian dishes, or grab a quick sandwich at Buffet Skola. 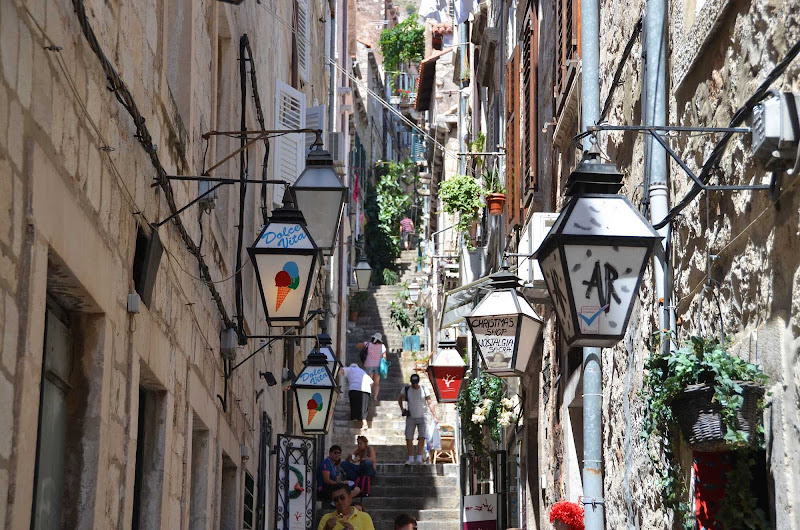 The climate along the Dubrovnik Region is a typical Mediterranean one, with mild, rainy winters and hot, dry summers. Spring and fall are the best seasons to visit, with plenty of mild, sunny days. The summer high season can be overrun with visitors. Winters are fairly mild, but rainy spells do occur.

Large cruise ships dock at Gruz Harbor along the street Gruska Obala, about 1.5 miles or 15 minutes away from Dubrovnik’s Old City. Most ships provide free shuttle service to the Old City, but taxi service is also available. The rate for a ride into town is 10 Euros each way and can be paid in Euros. Small ships are sometimes able to dock in Old Harbor, just steps from the main attractions.

The walled Old City, where the main sites are located, is a pedestrian-only area. Public boat service to the offshore islands is available from the Old Harbor. The best way to see the city is by taxi; taxis can be found in front of the bus station, ferry terminal and the Pile Gate. There are several buses that are constantly running in Dubrovnik.

Store hours: Shops and department stores are open from 8 am to 8 pm and in tourist areas they are usually open seven days a week.

Tipping: There are no set rules or amounts regarding who and how much to tip in Croatia. For restaurants it’s common to tip 10%, even if a service fee is already included in the bill. Above and beyond this, tips are appreciated but not expected.

Dress: The streets in the old town can be quite slippery (especially if it's raining), so wear comfortable walking shoes with proper tread.

Language: Croatian is the official language, but many people speak at least some English.

Currency: The Kuna is the local currency. Note: The Croatian Kuno is not exchangeable outside of Croatia. You can often either pay with Euro or by credit card without getting ripped off by exchange rates.

Safety: Dubrovnik placed third on TripAdvisor’s list of the world’s safest cities. It's generally safe, though the usual precautions should be taken to protect yourself from pickpocketing.

Have you been to Dubrovnik? Please share a story, tip or discovery. What was the highlight?

“The city's cultural highlight is the annual Dubrovnik Summer Festival. A variety of open-air classical concerts, ballet, and theatrical performances are held at various venues within the walls, and the city becomes a riot of folklore, traditional dresses, midnight performances, and music.”

“Off the Dalmatian Coast, Hvar is known for its relaxed lifestyle, lavender fields, olive groves, and sublime beaches. It's where you'll find Dubovica Beach, with pebbles in place of sand, gin-clear water, and a waterfront restaurant.”

“No visit to Dubrovnik would be complete without a walk around the spectacular city walls, the finest in the world.”

“Beyond the beach on Brac I find more surprises. Five minutes to the east is the photogenic village of Bol.  Outdoor restaurants line this waterfront, with only a few nods to tourism. So picturesque is this island, I end up spending hours photographing the town of Supetar, which every guidebook I'd read said to skip over.”

“Sample Adriatic-prawn ceviche at Azur, an al fresco restaurant inside the famous stone walls of the old city, before stocking up on traditional hand-painted silk from the Konavle region at AR Atelier.”