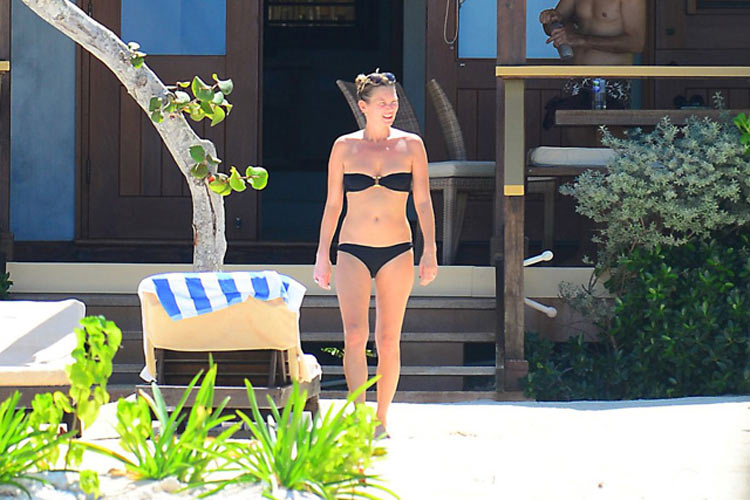 Where can you spot supermodel Kate Moss in the Caribbean? St. Barts (above), Jamaica and Mustique are three good guesses.

We’re not sure who loves the Caribbean more — cruisers or celebs. Some A-listers come to out-of-the-way sun-drenched islands seeking a secluded beach retreat away from prying paparazzi. Others flaunt their bronzed beach bodies on Twitter, Instagram and Snapchat every chance they get.

We've done some digging and turned up these 10 haunts preferred by the rich and famous. Keep an eye out next time you’re in port! 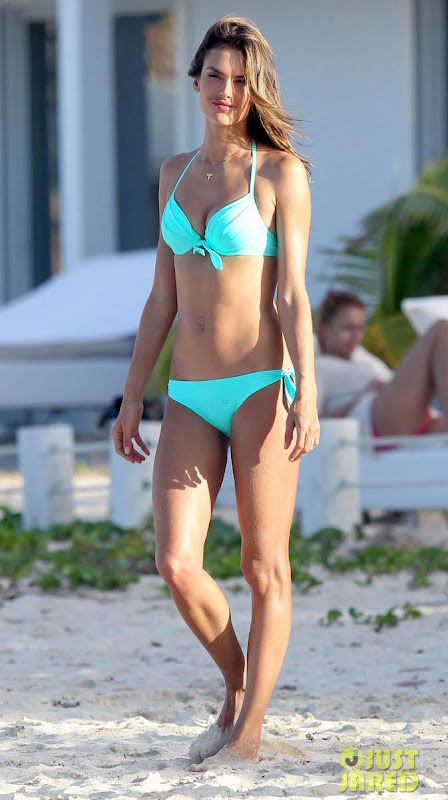 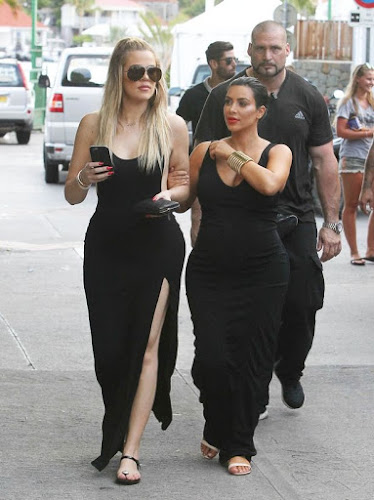 Part of the French West Indies, St. Barts (St. Barthélemy) is not only a stellar photo shoot destination (Alessandra Ambrosio has showcased bikinis galore on its beaches) but also attracts jetsetters in droves: Bruce Willis, Uma Thurman, Ivanka Trump, Jessica Alba, Jay Z and Lindsay Lohan have all vacationed here, lured here by the Gallic chic vibe, ooh-la-la beaches, romantic restaurants and petite resorts, and a convenient port in which to moor their yacht. In August last year, the Kardashians rolled in — Kim was joined on the family trip by sisters Khloe and Kourtney, mum Kris Jenner, and half-sisters Kendall and Kylie. Matt Damon, Usher, Jon Bon Jovi, Ashton Kutcher and Jason Statham have also been spotted rolling in.

As you’d expect, St. Barts offers quite a few high-brow places to stay. Hotel Guanahani and Spa, set on its own peninsula with full beach access, a beachfront gym, and watersports activities, is one of the most popular. 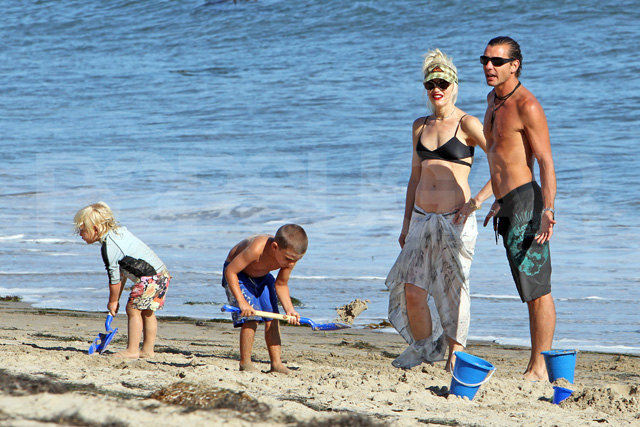 Source: POPSUGAR.comGwen Stefani and family on the beach in Jamaica. 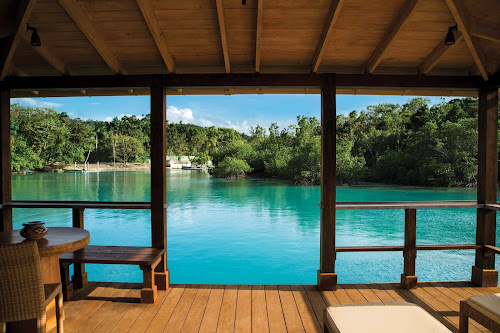 Jamaica was a British colony until 1962, and in the years following WWII the island drew starlets and artists from England and the U.S. — Sophia Loren, Audrey Hepburn, Graham Greene and Truman Capote all beat a path here for some fun and frivolity in the sun. Noël Coward had two homes here, as did Errol Flynn, who had arrived by yacht during a storm in the '40s and proclaimed Port Antonio “more beautiful than any woman.” 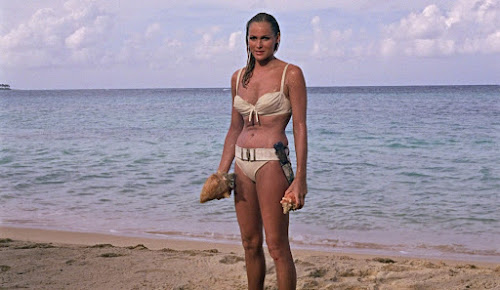 Ursula Andress during the shooting of the James Bond flick "Dr. No"

Today, this “other” side of Jamaica, separated from Kingston by the Blue Mountains along the island’s north coast, attracts a similar caliber of celebrity. James Bond author Ian Fleming’s former home GoldenEye — Fleming lived just off the beach on which the iconic Ursula Andress scene in "Dr. No" was filmed — was owned by Bob Marley for a few years in the late '70s and is now a chic boutique hotel run by Island Music founder Chris Blackwell. Kate Moss, Bjork and Gwen Stefani like to stay at music businessman Jon Baker’s secluded, forest-enveloped seven-suite GeeJam resort, located just off Frenchman’s Cove, where inspired musicians needn’t go far to capture that riff or lyric — there’s a recording studio on site. Other sightings: Jude Law, Paul McCartney, Ralph Lauren, LL Cool J, Eddie Murphy, Taye Diggs and Michael Jordan. 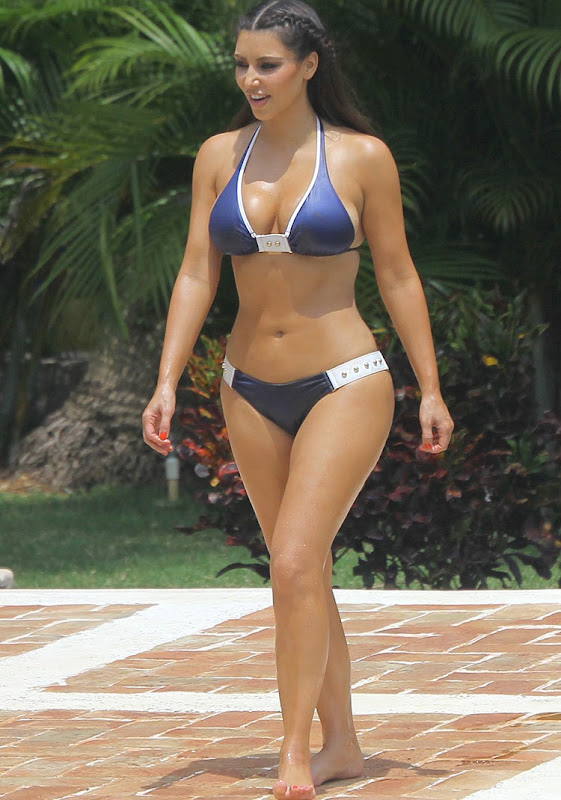 Source: FansShare.comKim Kardashian on vacation in the Dominican Republic. (The Kardashians are among the celebrities that provide candids to keep their fan base happy.)

In recent years the Dominican Republic has upped its celebrity ante. The late designer Oscar de la Renta’s Punta Cana mansion is nothing short of spectacular. Michael Jordan celebrated his bachelor party at Villa Vogue. Luxury all-inclusive Casa de Campo — where every villa comes with a personal maid, a butler and a garden crew — has welcomed the Kardashians, Justin Bieber, Beyoncé and Jay Z. And even if you aren’t a movie star, if you visit this resort you’ll soon feel like one: On the property you’ll find a replica of the 16th century Mediterranean village Altos de Chavón, built as a movie set in 1976, and its breathtaking, fully functional Grecian-style amphitheater. Perhaps you recognize it from Alicia Keys’ “Karma“ video? 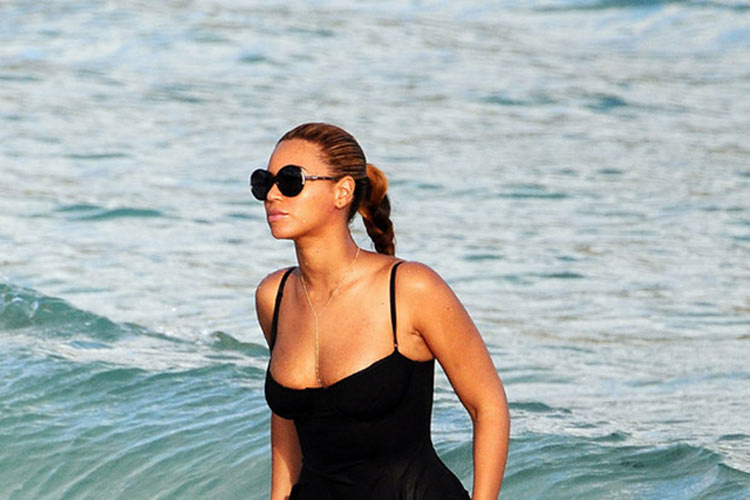 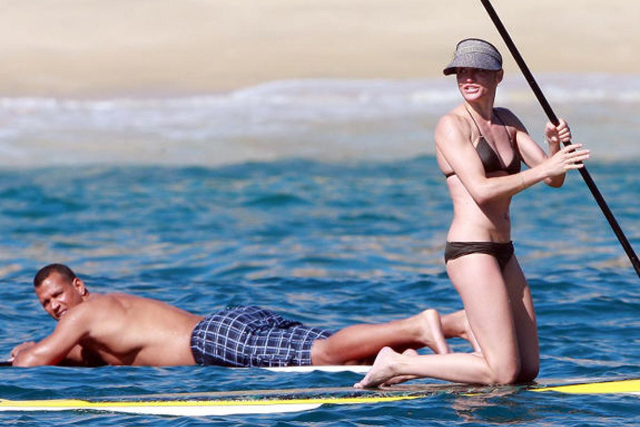 Dotted with picturesque fishing village connected by unsealed roads, the Bahamas — especially Harbor Island on the long, slender island Eleuthera — is a haven for peace-seeking notables. Many famous visitors rent out a private home when visiting on a family trip (Mariah Carey bought one outright for $5 million on Windermere Island) while luxurious resort The Cove offers privacy and part room aplenty — when Cameron Diaz threw a bachelorette party here for one of her friends, Mariah Carey and Lenny Kravitz were among the guests to attend. Angela Bassett, Kerry Washington, Cindy Crawford, Oprah Winfrey, Martha Stewart and Jennifer Hudson have also been spotted relaxing in the Bahamas. Frequent visitors to the Bahamas' exclusive Harbour Island include LeBron James,  Elle MacPherson, Michael Dell, Tyra Banks and Jennifer Aniston.

See Cruiseable's guides to the Bahamas and Eleuthera. 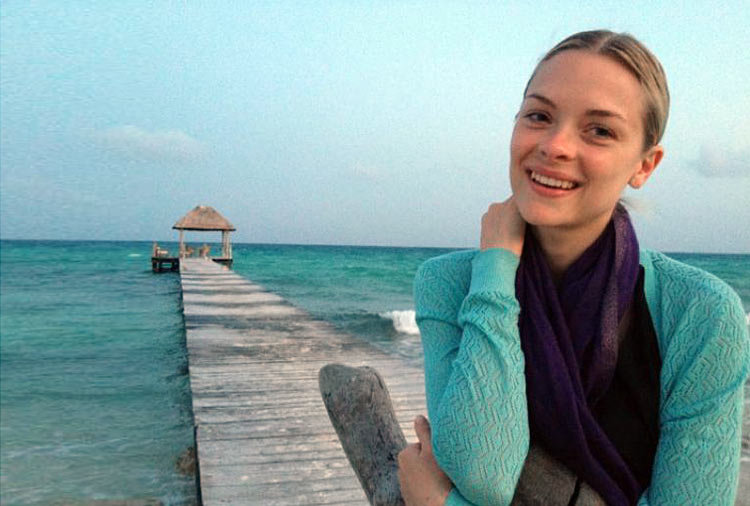 The Yucatán Peninsula is a treasure trove of visually arresting experiences — azure waters concealing offshore reefs, white-sand beaches and beautiful Mayan ruins. Understandably, Mexico’s Riviera Maya (Costa Maya) is extremely popular with visitors, and with thousands of rooms along the stretch from Cancun to Tulum it can be hard to escape the madding crowds. For visiting notables seeking a little privacy, the Viceroy Riviera Maya on Playa del Carmen is the obvious choice — Selma Hayak, Molly Sims and Jamie King have all used it as their home base. 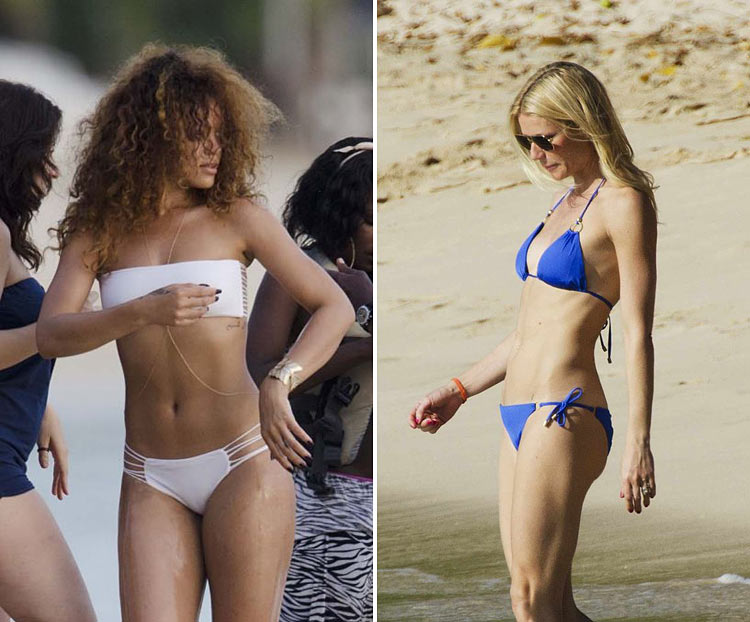 Rihanna’s home — she returns regularly to enjoy the sun, sand and sea while hanging out with friends and family — also is a bit hit with celebs hailing from both sides of the pond. F1 driver Lewis Hamilton showed off his new cornrows while vacationing here. Mark Wahlberg and Rhea Durham were seen holding hands as they strolled the beach. Rapper Eve took hubby Maximillion Cooper on a jetski tour of the shoreline when they visited on holiday last summer. Prince Harry, Simon Cowell, Sir Cliff Richard, pregnant Penelope Cruz, every football player that’s ever played in the Premier league … you get the picture. Barbados is so star studded it would be strange if you didn’t see someone famous as you wander around. 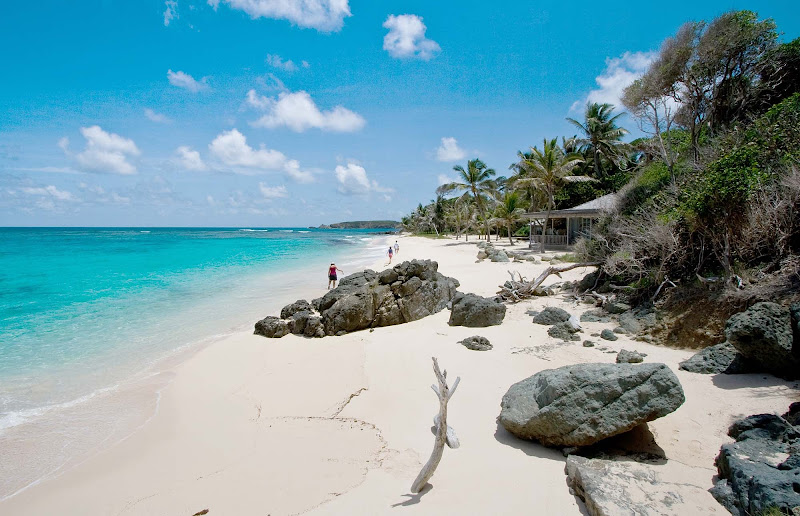 This privately owned 2-square-mile haunt, set within the St. Vincent and Grenadines clutch of islands, ranks among the Caribbean’s most exclusive. With only a few private villas and two tiny hotels — the 17-suite, butler-serviced Cotton House and five-room Firefly — to choose from, Mustique has long been a favorite with the crown royals and rock royalty alike. Kate Middleton flew in with Prince Henry, Kate Moss and Amy Winehouse have spent their holidays here and Iman and Sir Paul McCartney have been spotted. Mick Jagger and David Bowie both went one better and bought houses on the island.

See Cruiseable's guide to St. Vincent and the Grenadines. 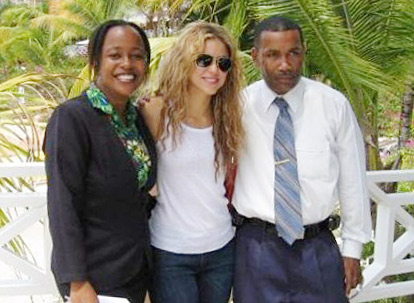 Shakira poses in Tobago, the less visited half of Trinidad and Tobago.

Tobago, the laid-back half of Trinidad and Tobago, offers stellar bird watching, but that just may be surpassed by its celeb spottings. Signatures at Coco Reef Resort & Spa’s guest book include those of Diana Ross, Shakira and Sting. And you many also recognize some of Tobago’s locals: Rapper Nicki Minaj, R&B Singer Billy Ocean and Tatyana Ali hail from these shores. 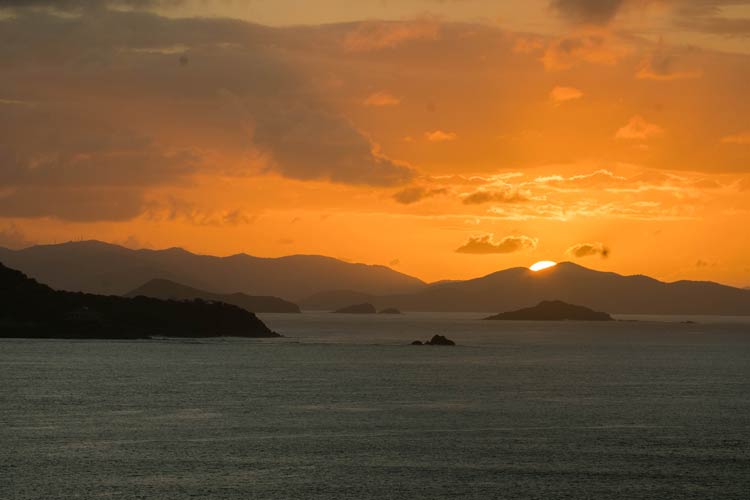 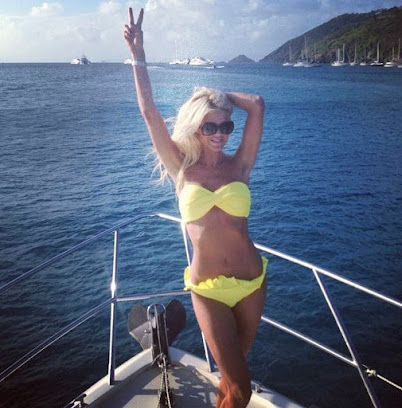 Part of the British Virgin Islands in the northeastern Caribbean, Necker Island is owned by billionaire entrepreneur Richard Branson. His personal guests have included Oprah, Harrison Ford and Steven Spielberg, Swedish model Victoria Silvstedt and Kate Winslet — the actress heroically carried Branson’s mother to safety during a 2011 fire — but when Branson’s out on business you can rent a room or take the entire property to yourself. (As if!) The Great House and surrounding six Balinese-style cottages can sleep 34 adults comfortably. And as the billionaire says, what happens on Necker stays on Necker.