Barbados travel guide: What to do & see

Barbados, located in the Caribbean’s Lesser Antilles, is a gorgeous tropical paradise set far away from most other Caribbean islands. Ruled by the British until 1966, it is nearly 1,000 miles east of the Netherlands Antilles chain and fuses African and British culture to create a charming, friendly world where travelers often have a memorable experience.

Barbados is also one of the Caribbean's leading tourist destinations and is the most developed island in the region. It offers everything from inexpensive guest houses to five-star luxury hotels and resorts, many of which line the island’s abundant beaches. The Boatyard is among the most popular of the many accessible beaches around the island, but there is more to Barbados than sun and surf.

Cruise ships that call on Barbados 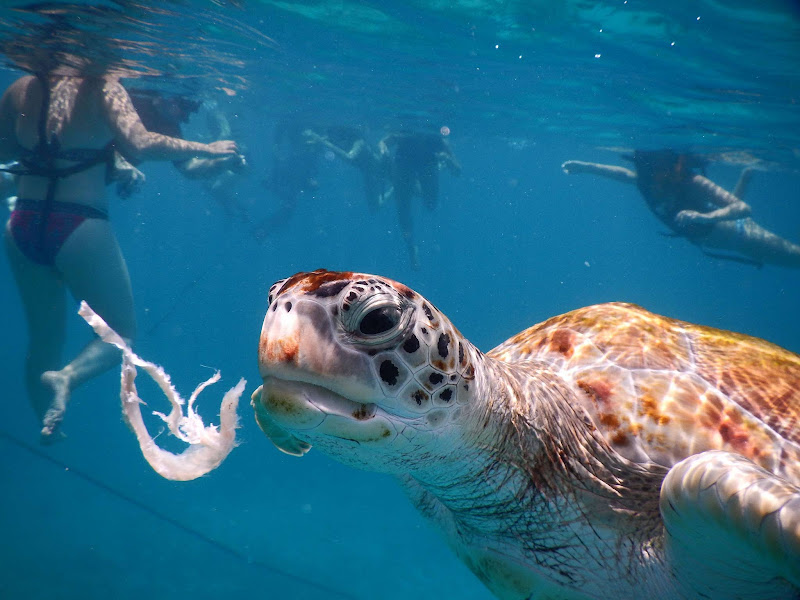 What cruise visitors can do & see in Barbados

The capital of Barbados, Bridgetown is known as a Caribbean gem with strong British colonial roots. Broad Street is home to several large department stores and duty-free shops. Sunbury Plantation House, which dates from 1660, features historic antiques, including carriages and farm implements. St. Nicholas Abbey is part of new Slave Route Project, a heritage tourism initiative of the Ministry of Tourism. Erected in 1650, it is one of the only three houses of Jacobean architecture still standing in the Western Hemisphere and features Dutch gables and finials of coral stone.

The Careenage is a narrow inlet that runs through the heart of Bridgetown. You can take a small, recreational boats and see some of the city. If you want to unwind, Queen's Park is one of the most popular spots to enjoy a picnic lunch and offers plenty of shade and tranquility.

The Barbados Museum (246-427-0201) is a fascinating place to catch up on the history and culture of Barbados and Bridgetown. This was a military prison, used to house criminals and prisoners of war. The museum also features an exhibit, which shows the island's progression from prehistoric to modern times. Barbados has an extremely strong natural environment, evidenced by a showcase of indigenous spices and resources on the island.

The waters on the West Coast around Bridgetown are calm and peaceful, and there are numerous exquisite beach destinations. Paynes Bay is the perfect location for all kinds of water sports, and it's serene, so it's great for families. Directly south of Paynes is Brighton Beach, which is right next to where cruise ships dpock. Snorkelers are drawn to Mullins Beach because of its crystal blue waters and upscale facilities located on the shore. 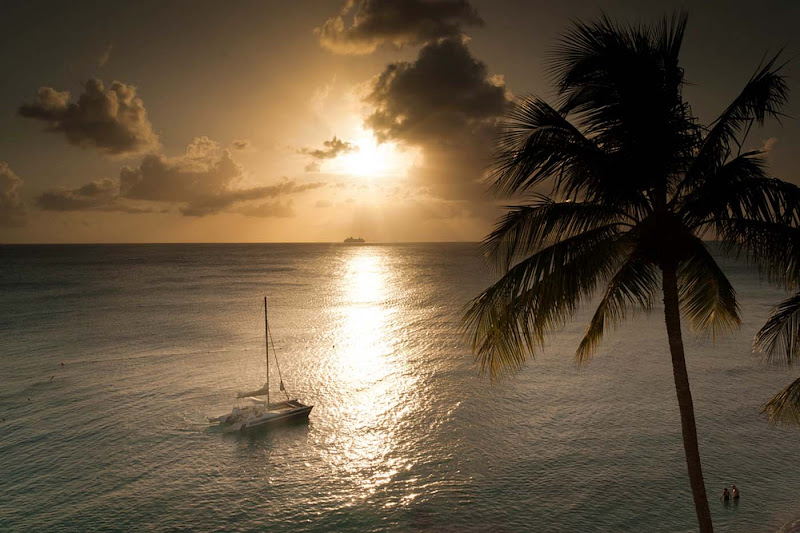 Joe Ross / Creative Commons BY-NDThe sun sets on a catamaran on a quiet bay on Barbados.

Golf lovers can tee off at one of three golf courses, including the Green Monkey at the rebuilt Sandy Lane resort. There's also professional horse racing, tennis, squash and polo to watch. However, due to the island's longstanding British history, cricket is the most popular game. In per capita terms, there are more Barbados-born world-class cricket players than any other country in the world.

The most popular dishes in Barbados are flying fish (an icon also found on the island’s currency), "cutters," a local sandwich made using salt bread, and pepperpot, a pork stew in a spicy dark brown sauce. Make sure to sample these local favorites before you leave.

The Waterfront Café (246-427-0093) on Cavans Lane in Bridgetown an island favorite. Every day fresh fish specials are featured, and they're usually prepared Creole style. You can also try the peppered steak or the fish burger. The Waterfront also has hands-down the best vegetarian menu on the island, and there's also entertainment. Tuesday nights you can get a Bajan buffet and enjoy live music, while Friday and Saturday nights feature live jazz. Brown Sugar at the Aquatic Gap (246-426-7684) is just south of Bridgetown and has the most exotic entrees on Barbados. Dine by candlelight on the open veranda and enjoy the Creole chicken, stuffed crab backs and succulent lobster. If you're looking to drink, the most popular location on all of Barbados for drinking and dancing is Harbour Lights on Bay St. (246-436-7225). There is a cover charge, but this is the hottest joint on the island. 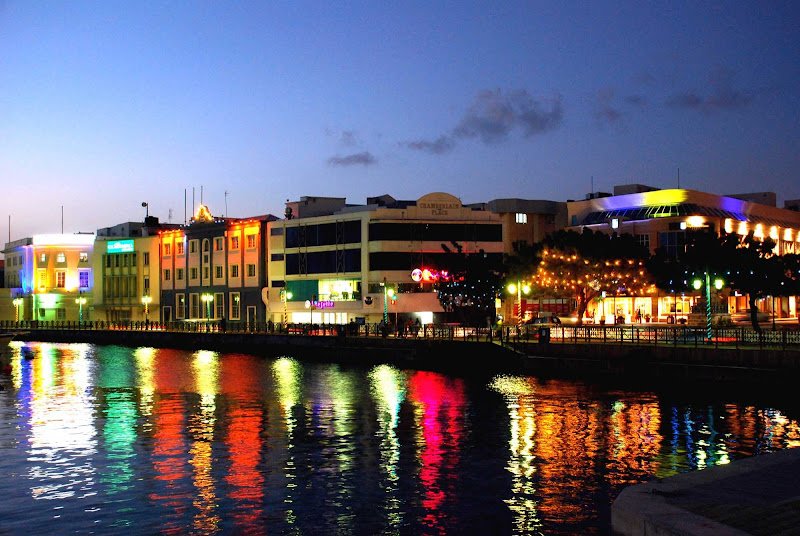 Courtesy of Barbados Tourism AuthorityBridgetown, Barbados, on a summer night.

All ships dock at the Bridgetown Cruise Terminal, about a mile west of downtown Bridgetown.

Like in most of the United Kingdom, drivers in Barbados use the left side of the road.

Taxis are a great choice for transportation in Bridgetown and all around Barbados because they are on a fixed rate set by the government. Up to five passengers can ride in a taxi at no additional charge. Paramount Taxi Service (246-429-3718) is the best company in Bridgetown. Taxis are everywhere and easily spotted, look for the "Z" on their license plates. Lyndhurst Taxi Service is another quality outfit (246-436-2639). From Bridgetown out to many of the island's most popular destinations will typically cost around $15.

Buses: The bus system is extensive, cheap and fast. Blue-colored public buses are run by the Barbados Transport Board.

Store hours: Stores in Barbados are typically open from 10 am to 5 pm, Monday through Saturday. Many shops are located right in the cruise terminal.

Safety: Barbados is generally a safe place, but it's recommended to stay in tourist locations. As always, be aware of your surroundings and keep your valuables locked up.

Have you been to Barbados? Please share a story, tip or discovery. What was the highlight?

“Make like a local and try some of Barbados’ famed local fare including flying fish, conkies, cou-cou and rotis. Wash it all down with Barbadian rum, considered some of the finest in the Caribbean.”

“So entrenched is the recipe for Bajan rum punch that it's known by a timeless rhyme: One of sour, two of sweet, three of strong, four of weak. The combination of lime juice, simple syrup, Mount Gay rum, and chipped ice is pretty much inescapable.”

“Traveling on foot from the cruise ship dock, you can explore Broad Street stores, traditional markets and cafes serving Bajan favorites. If you want to travel further afield, loser yourself in ancient forests and gardens at Welchman Hall Gully and the Flower Forest of Barbados.”

“Flying fish is one of the island's national treasures. Fried, blackened or grilled, it's all good. Try it at Oistins Fish Fry on Friday nights in the south, or in Moontown, north of Speightstown. For a quieter alternative I visit Sand Dunes restaurant on the east coast.”

“John Moore Bar: Barbados is a huge rum producer, and no place is more authentic to enjoy its bounty than a no-frills Bajan rum shop amid games of dominoes and a crackly radio belting soca music. No fancy labels here; only cheap ones. Locals order flasks. Tourists order shots. You know what to do to fit in.”