Lying nine miles off the coast of Venezuela, Trinidad is a Caribbean paradise and the southernmost link in the Antillean chain of islands. Trinidad is part of the two-island nation known as Trinidad & Tobago. While these two islands are linked in their government and geographical proximity, they have distinct personalities. 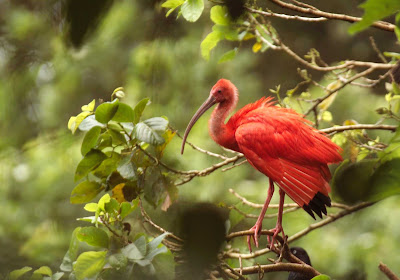 Trinidad, the larger of the two, is home to most of the country's cities and activity, and is the industrial center, noted for petroleum and natural gas production. Tobago is known for tourism, which is its main industry. Both islands have their share of natural beauty and enjoy a generally pleasant maritime tropical climate influenced by the northeast trade wind, though Tobago has the better beaches.

Trinidad has grown into a major tourist destination in part because of its success in the oil industry. Today, Trinidad remains a prosperous island that welcomes cruise ships from all over the world to dock at its picturesque capital, Port-of-Spain.

Port-of-Spain is a cultural and visual highlight of any cruise excursion. A city of just over 50,000, it is known throughout the world for its vibrant and colorful festivals, including the annual Carnival celebration. It is a great melting pot of cultures, featuring prominent African, European, Indian, and Asian dining, architecture and language.

In and around the Port-of-Spain and Trinidad itself, you will be treated to a land that has been spared from the massive over-development that has troubled other notable ports of call. Instead, you will find ample beaches that have remained in their pristine states, casual and elegant dining in friendly local restaurants, and a great assortment of activities and events that will allow you and your family to explore this magical island and all it has to offer. 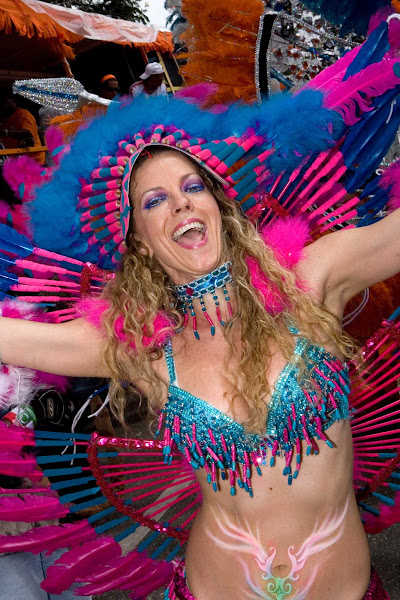 Beginning just after Christmas and lasting until Ash Wednesday, the Carnival of Trinidad is world famous for its charm and festiveness. The entire island becomes a tremendous party as locals dress up in elaborate costumes and bands play live music to hundreds of thousands of dancing revelers. You can arrange for reservations to attend one of many parties on the evening before Carnival Monday (the highlight of the festival). Contact the National Carnival Committee (868-627-1350) for more information.

Trinidad is less famous for its beaches than some of its other attributes, yet it still has more beach land than any other island in the West Indies. Although some of them are rather remote, they are still accessible and beautiful as well. Maracas Bay, nearly 20 miles from Port-of-Spain, has a protected cove, restrooms, and some limited food facilities. Manzanilla Beach, on the eastern coast of Trinidad, has breathtaking ocean views, and picnic facilities as well. To get away from the beach-going crowds, head to Las Cuevas Bay. A beautiful bay with limited tourist facilities, Las Cuevas is located just off the North Coast Road of Trinidad. 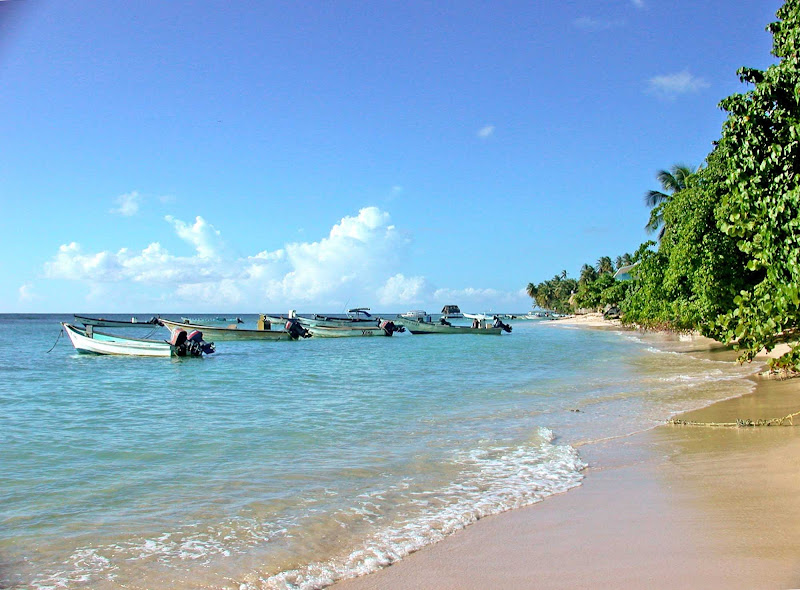 Port-of-Spain is famous for its wide variety of luxury items available at affordable prices. You can shop till your heart's content for a variety of goods, including fine linens, jewelry, brass goods, watches from across the globe, etc. For the ultimate in luxurious goods, head to Stecher's (868/657-6993) in the Gulf City Complex for diamonds, perfumes, and exotic jewelry. If you are looking for local wares, then head to The Market at 10 Nook Ave. (868/624-1181). Here you will find over twenty stores selling traditional Trinidad clothing, artwork and accessories.

When the sun sets over this magical island, head to French Street and pay a visit to the Mas Camp Pub (868/627-4042). Here you will find a lively bar where traditional Calypso music is played every Wednesday, Friday, Saturday, and Sunday throughout the year. With a cheap cover and a great atmosphere, it shouldn't be missed! Moon Over Bourban Street (868/637-3448) on Southern Landing in Westmoorings, features live music, and comic acts on featured evenings.

The Travel Centre (868/622-0112), located at 16 Damian St. in Woodbrook, offers many guided tours of the island and its surrounding waters. You can arrange for a two-hour tour of the main highlights found in Port-of-Spain, or take a longer four-hour Saddle Road tour that treats you to the gorgeous mountain scenery found near Maracas Bay. If you want a complete guided experience of Trinidad, take the Island Circle Tour, an eight-hour journey that whisks you away to the Gulf of Paria, Pointe-a-Pierre, and San Fernando. Marvel at the coconut plantations at Mayaro Beach, and much more.

North of the capital city is the Royal Botanical Gardens of Trinidad (868/622-4221). A 70-acre garden that is open every day from 6 am to 6 pm, the garden is filled with beautiful trees and flowers. Inside the garden is the President's House, home to the head of Trinidad and his family. Included in this fascinating garden is the Emperor Valley Zoo (868/622-3530). An excellent place to take children, the zoo features a great assortment of exotic plants and animals, a wonderful aviary and a tropical jungle atmosphere.

The Plantation House Restaurant is set in a one hundred-year-old historic building at 38 Ariapita Ave. (868/628-5551) and features everything the meat-loving carnivore can hope for. Dine on great seafood and beef, or be a little adventurous and try their alligator tails. The portions are huge, and their prices are affordable. For a great lunch, head on over to the Veni Mangé (68A Ariapata Ave., 868/624-4597). With a fabulous bar and a revolving menu, this restaurant is a local favorite and a great place to spend a weekend evening as well. 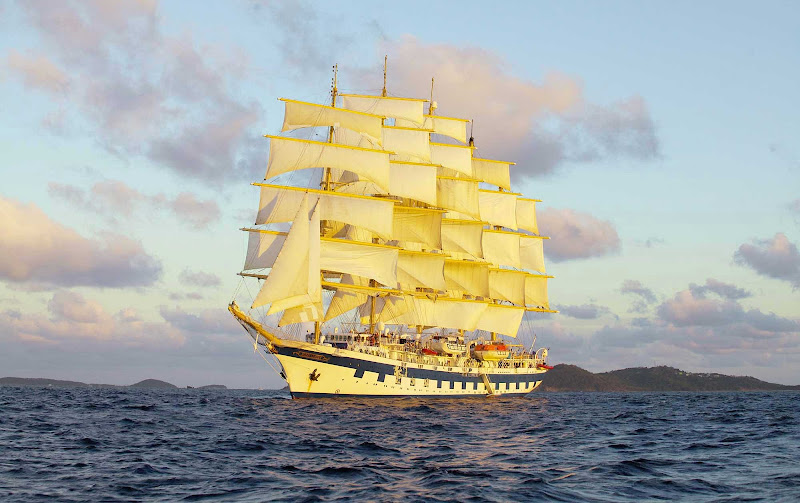 Courtesy of Star ClippersRoyal Clipper calls on the island of Tobago. 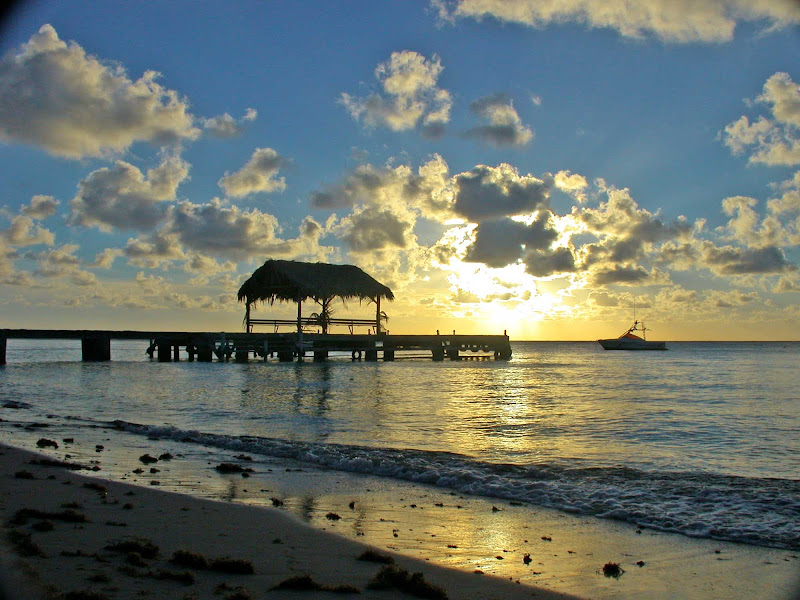 Courtesy of Trinidad & Tobago Tourism Development Co.Sunset at Pigeon Point on the western coast of Tobago.

A new and modernized dock awaits you at Port-of-Spain. From this multimillion-dollar cruise-ship complex, transportation options are plentiful, ensuring that you can efficiently begin your Trinidad adventure immediately upon arrival.

Port-of-Spain has many taxis roaming the streets and docks. They are easily discernable by their license plates, all of which begin with the letter "H." Taxis in Trinidad do not have meters, so make sure to discuss rates with your driver before departure. In addition, taxis drivers are always available to provide a guided driving tour of the city. Many are quite knowledgeable and friendly. It is recommend that you avoid renting a car in Port-of-Spain, as the area is notorious for hazardous driving and questionable road conditions.

Passport: A passport is required.

Language: English is the official language. Some locals speak a form of pidgin that is often difficult for visitors to understand.

Safety: Trinidad & Tobago has one of the highest murder rates in the world. Generally, it is best to travel with the sun. When it sets, make sure you are in a safe place with people you trust. This is more important in Trinidad than in Tobago. In Port-of-Spain, areas east of Charlotte Street become increasingly unsafe (but this shouldn't be considered an absolute boundary, on some east-west streets you can go a block or two further). Stay out of East Dry River, Belmont and Laventille. See Cruiseable's safety tips for cruisers.

Have you been to Trinidad & Tobago? Please share a story, tip or discovery. What was the highlight?

“Tobago has enough rare easily spotted birds (210 nesting species compared with 80 on most other islands) to excite even a non-bird watcher like me. I spotted motmots with long jewel-colored tail feathers on phone lines and was awakened by the raucous calls of chachalacas, also called cocricos because they sound exactly like what they're shouting.”

“Call it a Caribbean-style battle of the bands, where the region's signature Calypso sound explodes into a melodic chiming cacophony. Percussionists in massive orchestras, some in the 100-member range, hammer their precision-formed steel pans with ferocity and vigor as they compete in perhaps the world's greatest steel pan competition.”

“Coney Island has its hot dogs, Philly has its cheesesteaks and Trinidad and Tobago has doubles — a home-grown twist on Indian-style curried chickpeas tucked into a deep-fried yeast dough.”

“From Port of Spain, take a stroll on the wrinkled surface of the bizarre Pitch Lake, an asphalt lake where the warm sulfurous pools are said to have healing qualities.”

“It's hard to beat the beauty and brevity of this snorkel-hike trip [to Little Tobago]. Just past the world's largest brain coral is this island speck, where a steep jungle trail ends at a view you share with magnificent frigates.”

“For a tantalizing taste of Tobago, take an island tour in Speyside and the Leeward coast. For a zen experience, head to the Kariwak Village Holistic Haven where you can practice yoga or tai chi in an open-air studio.”