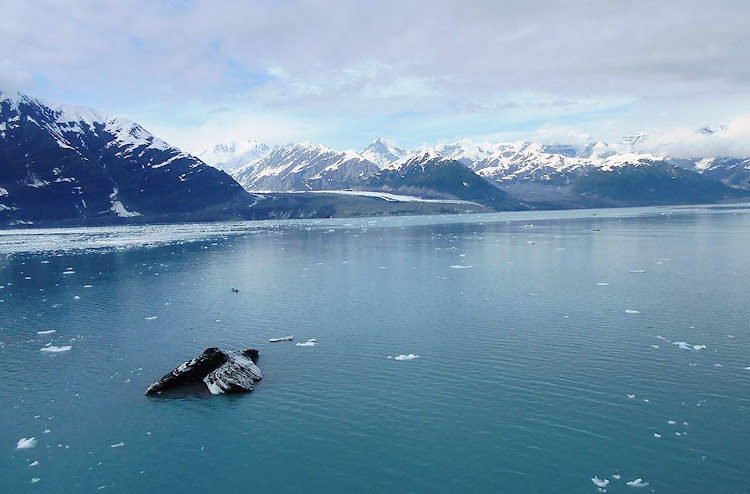 The Hubbard Glacier was the high point of our Seven Seas Mariner cruise to Alaska, not only for its spectacular beauty but for its sounds as fracturing ice fell into the sea.

Experiencing Alaska on a luxury ship

Scenic highlights of our Alaska cruise aboard Seven Seas Mariner

No strangers to Alaska, my husband Richard and I have taken a half-dozen cruises as well as a couple of land excursions to the Last Frontier. But our most recent cruise on June 22 proved the most magical.

Where to begin? While we can’t sing enough praise about the tony, country club-style 700-passenger Seven Seas Mariner (see my review), Alaskan scenery stole the spotlight. Our captain, Serena Melani, is the first female captain that Regent Seven Seas has had, and she deftly guided her vessel past spectacular scenery, while another treasure, naturalist/storyteller Terry Breen, narrated over the PA system for long spells.

I would have to say that the Hubbard Glacier was the star of the cruise. Nothing can really prepare you for the sight — and sound — of the world’s largest tidewater glacier. We encountered it on the second day of the cruise after following the rugged, fjord-cut coastline of Southeast Alaska’s panhandle. And was it ever a showstopper! 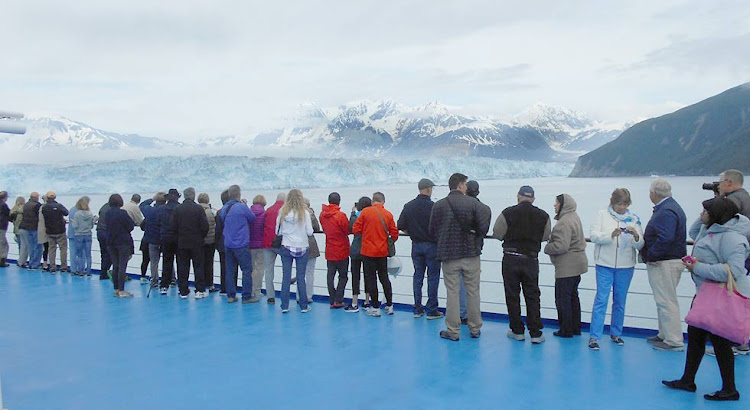 Richard Pietschmann / Special to CruiseablePassengers press against the rails to take in Hubbard Glacier.

Hubbard winds 76 miles from a massive high-altitude ice field in Canada’s Yukon that feeds it down to Russell Fjord’s Disenchantment Bay in the United States. It moves with surprising speed, a rate of tens of feet or more per day, not the inches typical of other glaciers. Its 400-foot-high face, or “snout,” is gnarled into abrupt towers and riven with the blue of ice compressed under great pressure until all air has been forced out of it. That vast shelf of sea-level ice is a mile across, and it periodically showers ice falls or calves icebergs into the water, often accompanied by the sharp cracks and deep booms of fracturing ice. Even the biggest cruise ships seem like bathtub toys in comparison.

On Mariner, every suite has a balcony and thus provides instant access for every passenger to view a humpback whale blowing or a lone brown bear in search of a salmon dinner

Hubbard is a highlight of any Alaska cruise that visits it (not all do), and It proves even more so on a stylish ship like Mariner, where every suite has a balcony and thus provides instant access for every passenger to view a humpback whale blowing or a lone brown bear (the same species as the grizzly) in search of a salmon dinner.

Mariner is small enough to glide into favorable viewing positions that much larger ships can’t reach and moves quickly from one place to another to give passengers ever-changing scenery of snow-clad mountains hung with high-altitude glaciers and endless swaths of thick forest packed with spruce, cedar and alder. Even the time of year cooperates: Alaska’s famed “midnight sun” lengthens days to allow hours more daylight sightseeing time.

Exceptional high points on board 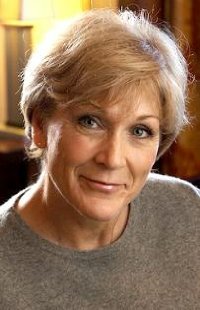 A highlight of the trip were the running commentaries by naturalist/storyteller Terry Breen over the PA system.

As is true with all Regent Seven Seas cruises and its sister line Oceania Cruises, the food is a high point. Mariner exceeded expectations, especially in its two alternative (and included) dining venues Signatures and Prime7. (Don’t expect unlimited access, however. On our seven-day cruise, passengers were allowed one reservation in each restaurant, a policy that expands to two or more visits on longer cruises.) We did enjoy the fare in Compass Rose, the main dining room, though the service proved excruciatingly slow during the one breakfast we had there, something we did not find at dinner.

The port lectures and Terry Breen’s commentaries about various scenic opportunities were tops, too. Production shows were well staged with talented dancers and singers, and a comic ventriloquist was hilarious.

The Canyon Ranch SpaClub proved a bit disappointing due to a faulty steam bath (I happen to be addicted to steam baths). But Mariner’s service, deck crew, unusual spaciousness and public rooms deserve high marks. We loved having drinks in the Observation Lounge, where panoramic windows provide views from every angle. When cruising Alaska, you really don’t want to miss the views. 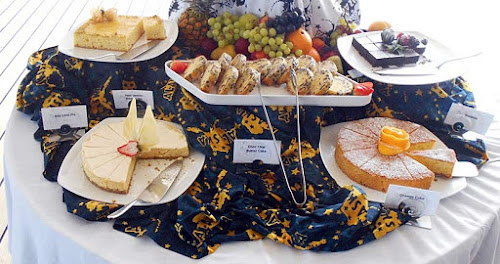 We loved the food on the entire ship but there were a few shining moments such as a salmon and halibut cookout on deck in Ketchikan. The fish were perfectly grilled and accompanied by salads, sides and desserts. Another was the Tomahawk veal chop, prime rib eye and filet mignon served in Prime7. The chefs also knew how to make perfect egg white omelets with gruyere cheese. Dinners at a table for two by the window in Compass Rose were also special.

We also loved the Coffee Connection on deck 6, where every morning I fetched double cappuccinos to bring back to the cabin. Yes, we could have called room service, but it was hotter and faster this way. The attractive area buzzes all day with passengers getting their caffeine fixes, sandwiches, pastries and cookies. Even specialty coffees are free on the all-inclusive Regent Seven Seas.

Where we stopped & what we did

Even a relatively short cruise in Southeast Alaska promises a port-intensive cruise. Our week had just two sea days: the day after sailing from Seward and the day before reaching Vancouver. The other five days were packed with four ports and a day spent getting to and hovering near Hubbard Glacier. And there’s nothing like the lure of a full menu of free shore excursions included in the fare for all Regent Sevan Seas ships to get you out of your suite, even for those who feel so comfy staying in. 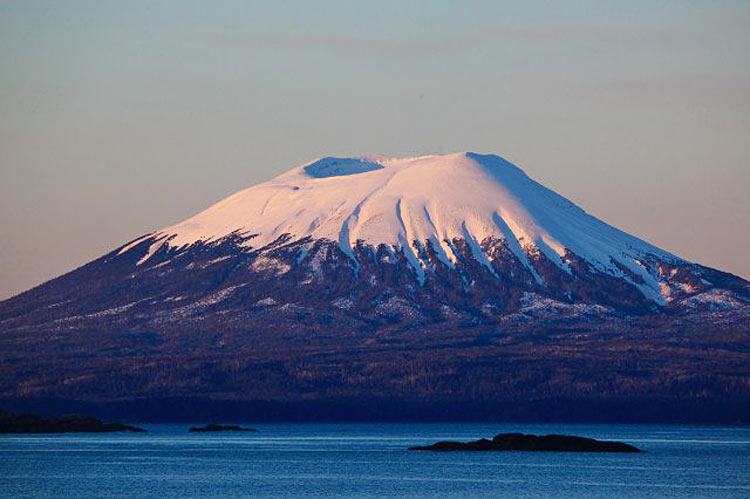 Courtesy of VisitSitkaMount Edgecumbe is a dormant volcano that rises 3,201 feet over Sitka, Alaska. It last erupted about 2,400 years ago.

We pretty much did it all, starting with a four-mile bike ride and a fairly strenuous three-mile hike in Sitka, where our guide congratulated our small group on being the first that season to make it all the way up to a splendid small lake, the still waters reflecting the surrounding forest. Then we did an equally long rainforest hike and bike in Skagway led by two young guides who really knew their flora and fauna. We paused on our fat-tired mountain bikes to gaze in wonder at a pair of brown bears making their way across a distant meadow. 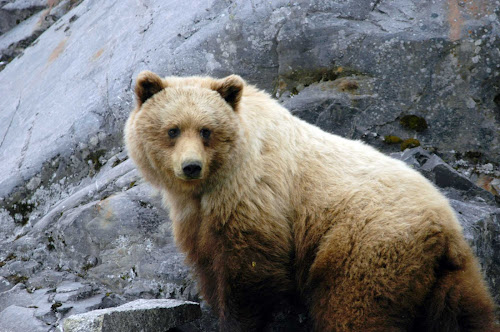 We decided to cancel the tour in Juneau because we had been to the town’s “walk-in” Mendenhall Glacier before, and instead walked off the ship (Mariner docked in Juneau) to stroll around. In Ketchikan, we went on a rather relaxed rainforest hike to an old growth forest and alongside a rushing salmon stream led by guides from Sockeye Excursions. After the stroll we walked around the breezy town, renowned for the size of its float-plane fleet (about 1,000 takeoffs and landings every day) and stopped for lunch at a place called Annabelle’s. We wanted some fresh, local salmon and while it was tasty, the fish on Mariner was much better and as fresh.

Our last day rewarded passengers with a mesmerizing transit of Seymour Narrows past verdant forests and snow-capped mountains. Once again, It was best appreciated from the Observation Lounge, where you could look at both sides along the narrow route. 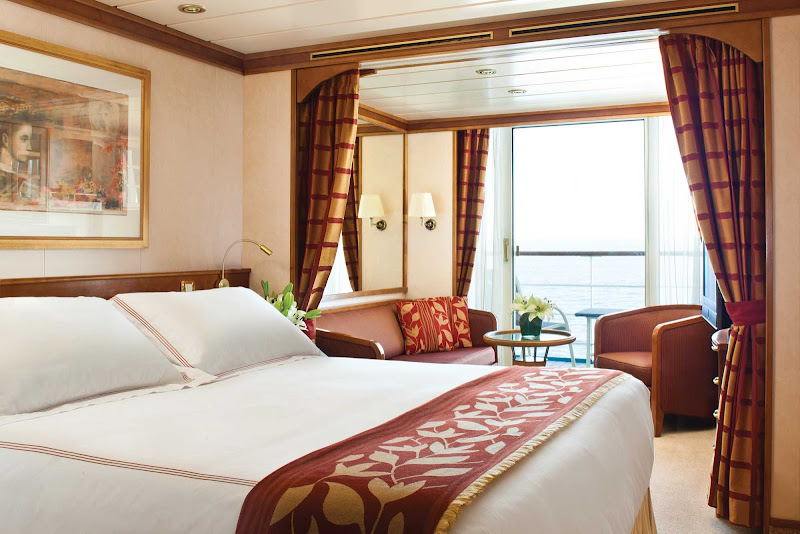 Courtesy of Regent Seven Seas CruisesWake up in your European king-size bed to an uninterrupted view when staying in Seven Seas Mariner's 301-square-foot Deluxe Veranda Suite.

The suite life on Mariner

Our deluxe veranda suite 805 had every creature comfort that can be found afloat, while Benilisa and Bagus kept our room in tiptop shape. We’re talking cleaning up in the morning and performing turndown service in the evening before we could blink an eye. The two stateroom attendants, both from the Philippines, were unobtrusive, always smiling and friendly. We had a heavenly king-size bed, good working desk for writing articles and working on Richard’s novel (read it at www.worldofhurtvegas.blogspot.com). There was also free unlimited Wi-Fi, though for only one passenger and one device at a time.

The suite was a cozy 301 square feet, including balcony, with a good size walk-in closet, flat-screen TV, marble-slathered bathroom with roomy shower (cruise ship showers are often cramped) and plenty of toiletries that were restocked daily. There were fluffy terry robes, slippers, umbrella, throw blanket for use on the balcony and a min-fridge stocked with whatever we wanted such as wine, bottled water and beer). All beverages and bar drinks are included in your fare.

During our cruise in June there were about six multi-generational families on board and more children than we’ve ever seen on a Regent Seven Seas ship. Regent primarily is adult-oriented, but the kids were having fun playing Ping-Pong, sitting in the whirlpools, joining the bike and hike excursions, and watching the views. Although the pool is big and inviting-looking, only a few hardly souls made it in the water. It no doubts gets more use during Mariner's sailings in the tropics.

Regent Seven Seas Mariner is currently doing Alaska a series of cruises from Seward to Vancouver until Aug. 24, when she sails from Vancouver to San Francisco or New York. Mariner then returns to Alaska in 2017, beginning sailings to Alaska on May 13, so be sure to book now if you're interested in a cruise to Alaska. I highly recommend taking one of her Alaska voyages — it will stay with you for a long time.

Contact the Cruiseable Business Department at 1-877-322-3773 or email a travel advocate to find a cruise that meets your travel style and budget.

How about you? Have you sailed on Seven Seas Mariner or cruised to Alaska? I'd love to hear about your experience! Write a review, tell a story about your adventure or leave a comment below.

Help improve this article! What did we get wrong or overlook? Be a co-creator!

In our series Luxury Cruises