Skagway port guide: What to do & see

The Klondike Gold Rush lives on in Skagway, where time hasn't entirely caught up with the future. The town's name comes from the Tlingit word for the area, “Skagua” or “Shԍagwei,” meaning “windy place with white caps on the water.” Skagway is the northernmost port along Alaska’s Inside Passage, about 100 miles from Juneau.

Skagway is perhaps most famous as the setting for part of Jack London’s book “The Call of the Wild.” Although its population reached 10,000 at one time, today just 920 residents call Skagway home.

Among the town's most popular attractions is the White Pass and Yukon Route, a railroad once integral to mining but now operating purely for the enjoyment of visitors and not to be missed. Tourists can also explore on foot, bike or in dogsleds.

Whatever mode of transportation is used to see the sights, Skagway remains a small town with Alaska's particular brand of rustic charm.

The White Pass and Yukon Route railroad has worthwhile excursions lasting four to eight hours; cruise visitors will want to opt for one of the shorter trips.

Cruise ships that call on Skagway

Top things to do & see in Skagway

See how local tribes and immigrants lived at the height of the Klondike Gold Rush at the  Skagway Museum, a good place to begin exploring the area. The Gold Rush Cemetery and Pioneer Cemetery, both part of the Klondike Gold Rush National Historical Park, bring to mind the hardships faced by Skagway residents at the turn of the 20th Century. Stroll near local streams and maybe you'll catch a glimpse of the precious metal that brought 100,000 prospectors to Alaska between 1896 and 1899. 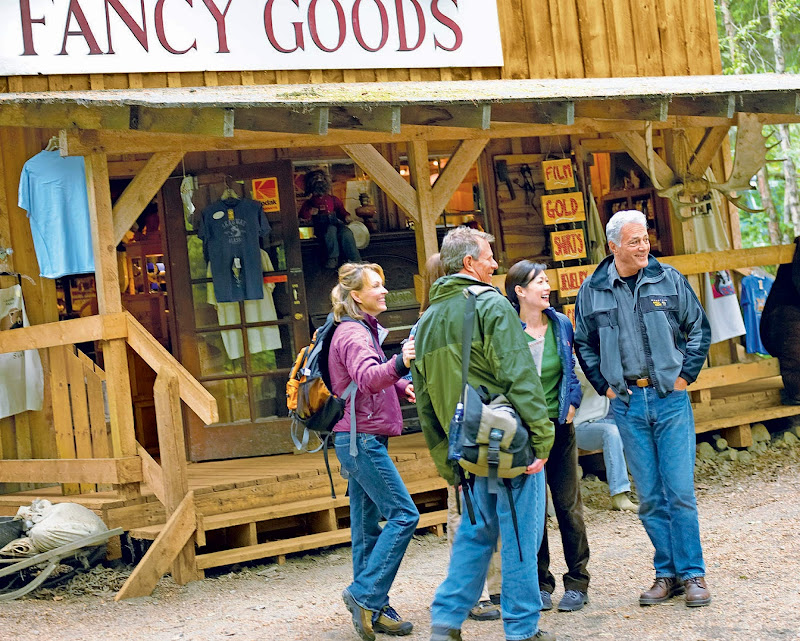 Courtesy of Princess CruisesSkagway, population 920, is located on the Alaska panhandle and has small-town charm.

There are some shorter day hikes in the Skagway area that are quite scenic. Download trail maps and print them out before your cruise, or stop by the Skagway Visitor Center for advice on a trail that is right for you.

The White Pass and Yukon Route railroad has excursions lasting four to eight hours that wind through some of the most dramatic scenery Alaska has to offer. There is limited seating on some trains so book early to avoid disappointment.

All ships dock at one of the three main docks, located side by side, just a few minutes walk from town.

Skagway is small enough to walk around, and taxis are not required or readily available. Bicycles can be rented, and pedicabs pedaled by locals are also available for short trips.

Store hours: Stores in Skagway are open about 9 a.m. to 6 p.m. Monday to Sunday. Some stores may stay open later when cruise ships are in town. Many shops are located on Broadway between 2nd and 7th avenues.

Tipping: A 10% to 15% tip on the restaurant/taxi bill is customary. Sometimes a tip is automatically added to your bill; check your credit card slip before adding additional tip.

Weather & dress: Dress in layers as temperatures can vary throughout the day.

Safety: Skagway is considered a safe and peaceful town. As always, be aware of your surroundings and lock up your valuables.

How about you? Have you been to Skagway or planning to go? We'd love to hear about your experience.