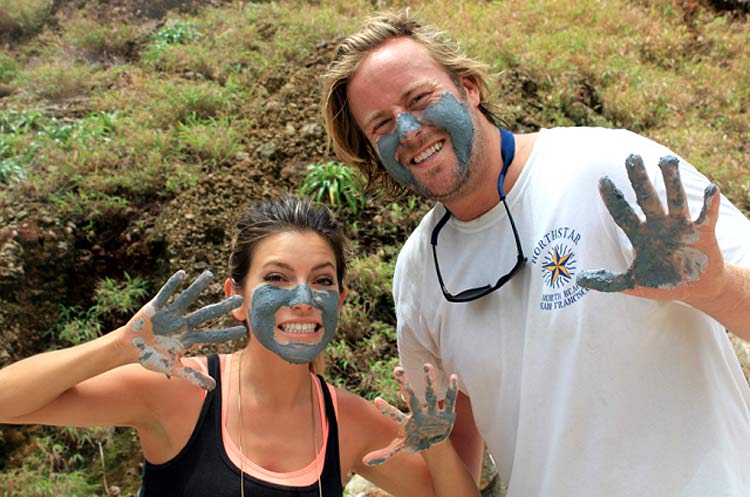 A sulfur face mask seemed like the right thing to do en route to the Boiling Lake on Dominica.

Roughing it in Dominica: Hike to the Boiling Lake

It was 7:15 am and we were in front of Jungle Bay’s activity center, picking out our walking sticks for the day’s adventure. We were heading to the Boiling Lake in the tiny island nation of Dominica, and we'd enlisted the help of a resort guide to help us navigate the notoriously challenging trek. From our experience in Saba, we knew walking sticks, which we previously dismissed as an accessory for avid Austrian hikers, were a must.

Judy, our guide for the day, worked for Jungle Bay and originally hailed from New Hampshire. After years in the Peace Corps based in Dominica, she began leading tours with Jungle Bay a year or so ago. We never asked her age, but she’s somewhere in the neighborhood of 60 years old and more active than Scott and I combined. This woman, who had hiked the Boiling Lake around a dozen times, was a snowboarding and skiing instructor for over 20 years, plus an aerobics instructor and a yoga teacher. She weighed about 90 pounds and she was about to kick our asses. 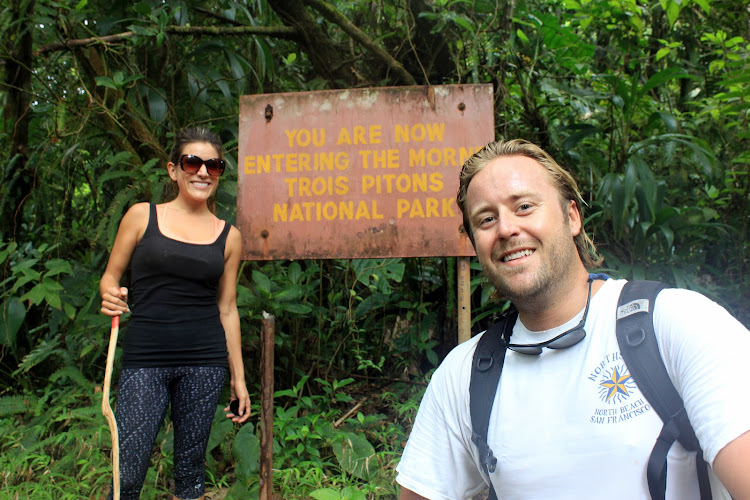 Shannon Kircher / Special to CruiseableSetting out on our hike to the Boiling Lake in Dominica.

It took us about an hour to reach the parking area for Titou Gorge, the trailhead for the Boiling Lake. We’d read that people often have a hard time finding the trailhead and I can see how this would be true. Scott and I had hotly debated whether or not we wanted to spend the money to hire a guide. We could surely figure this ourselves, right? Wrong. Absolutely wrong. Thank goodness we had opted to hire a guide. If we hadn’t, we would have never completed the hike. Between the unmarked paths, crossing streams and climbing rocks, we would have easily been lost.

The trail started out easily enough, just a few steps here and there but an otherwise flat forested path. I was silently praying that the path would stay like this: long, a slight incline to the top, with a few steps thrown in for good measure. About 45 minutes in, we reached a welcome sign for the park. I felt simultaneously worried and excited: Where exactly were we in this hike? We soon hit steps carved from dirt and wood. Lots and lots of steps. About an hour into our hike, Judy gave us a status update: We had about two hours to go before reaching our final destination. 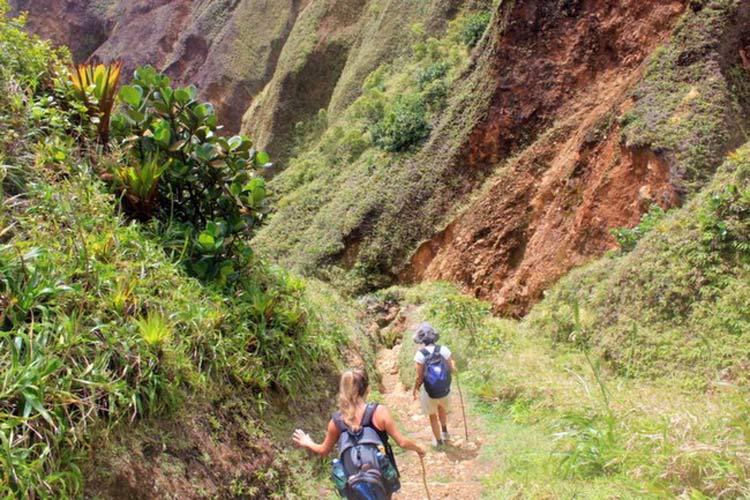 Shannon Kircher / Special to CruiseableThe beginning of the trail to Boiling Lake in the pretty Caribbean island nation of Dominica.

At this point, we were navigating flight after flight of steep, rocky steps, hearts racing. We’d make it to the top of a steep flight of steps only to realize we had hit a series of steps leading down, away from our goal. I quietly cursed to myself each time we hit a downward series, knowing all too well that this just meant it would take even more steps to reach the peak. I didn’t count the steps – that would have been an insane task – but they estimate that there are roughly 3,500 rugged steps each way leading to the Boiling Lake.

We hit the Breakfast River as our first marker. It was a stream of fresh water, flowing along the rocks in the middle of the park. As it turns out, the spring water in Dominica is totally drinkable. Since no humans or animals live in the forest, there’s no concern about contracting water-borne diseases. People even stop on the side of the road and fill up water at little nature springs erupting from the mountainsides. We were apprehensive, but filled our bottles with the spring water and drank. We crossed the river and continued on. 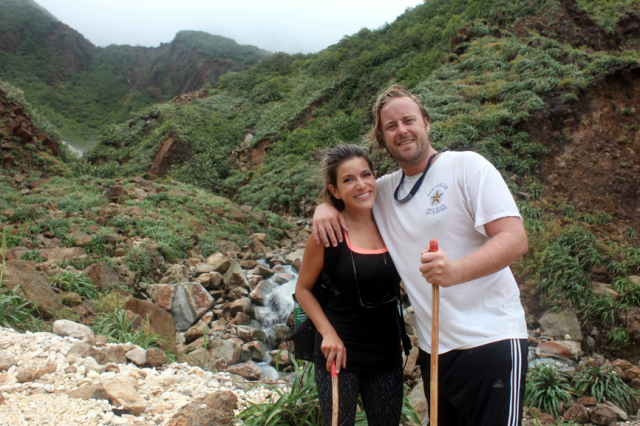 Shannon Kircher / Special to CruiseableShannon and Scott along the path to the Boiling Lake.

The hike took us to sections that involved us scurrying down hills, climbing down rocks and continuing up countless steps until we reached an area that looked like a postapocalyptic world: white residue covered the landscape, boiling water gurgled along the surface, and steam sprung from openings. Judy rounded up soft, gooey sulfur that we could use as a face mask. I mean, how could we resist a beauty boost during our hike? We covered our faces in clay and continued on.

We soon came across a sulfur spring. White powder lined the bottom of the stream, where people could write messages that would soon be washed away by the earth. We were getting close, within about 45 minutes of crossing the Valley of Desolation and reaching the Boiling Lake. 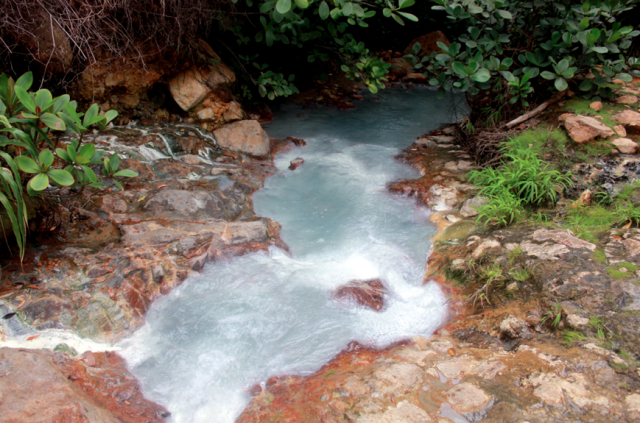 The Valley of Desolation is rugged terrain, both captivating and mildly frightening. Navigating your way through the area is often why guides are recommended. If there aren’t other hikers in sight, knowing which way to go and how to reach the Boiling Lake can be a tricky task. We followed Judy across the valley, up loose rocks until we hit the plateau where the Boiling Lake was waiting for us.

At about 200 feet deep, 200 feet wide and almost 200°F, this thing is a force to be reckoned with. It’s the second largest boiling lake in the world.

Steam billowed from the surface, obstructing our view of the water below. When we did catch a glimpse, we could see a huge bubble in the center where the water was clearly boiling. The grey liquid in the middle looks less like water and more like lava boiling slowly in a cauldron. At about 200 feet deep, 200 feet wide and almost 200°F, this thing is a force to be reckoned with. It’s the second largest boiling lake in the world, only surpassed by Frying Pan Lake in New Zealand. We were tired, sweaty and achy but felt so accomplished for having reached the top. We unpacked our lunches and ate overlooking the Boiling Lake while scattered rain passed overhead.

We began our descent with the realization that we were really only halfway done. We had another 6½ miles to go to reach the starting point of our hike. We knew what to expect going back, but were feeling less agile and our legs were beginning to get a bit wobbly. Our stopping points were a bit more frequent but we still made good time on reaching our starting point at Titou Gorge on our way out of the hike. 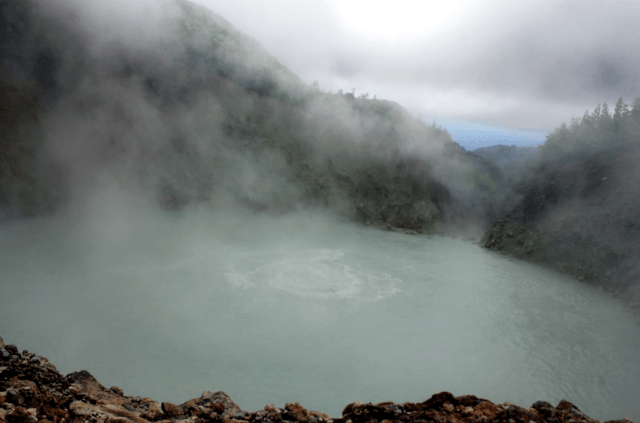 Shannon Kircher / Special to CruiseableThe payoff: Here's what the Boiling Lake in Dominica looks like.

A jump in the gorge was our reward for having completed this insane journey — more than a half marathon on what felt like a Stairmaster. Unfortunately, we didn’t bring our GoPro (I swear, this is our curse in life) but the swim through Titou Gorge was stunning; perhaps one of the most aweinspiring things we’d seen. The narrow passageway snakes to the far reaches of a cave where a waterfall flows. The passage is around 6 feet wide at most points with larger openings in between. If you’re not a strong swimmer, take a floatation device to reach the waterfall. 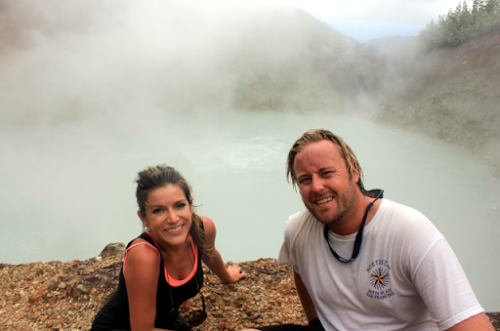 Shannon Kircher / Special to CruiseableShannon and Scott after reaching their destination.

We had somehow finished this long hike and had escaped unscathed. We learned one key lesson: we’re not really hikers. That’s not to say I don’t enjoy a good moderate hike, but when a hike is labeled as ‘EXTREME’ in the literature, that’s a good sign that it’s a bit out of my league. We were certainly happy to have accomplished the trek and had sore muscles for days to come as a reminder.

A note about the Boiling Lake

Be honest about self-identifying when deciding to set out on these hikes. We had a genuine conversation about whether or not we felt physically able to undertake this particular hike. We came to the conclusion that we’re currently active enough and young enough to take on the challenge. If not now, then when? I think most moderately active people with good cardiovascular health can undertake this at varying speeds. It will feel hard for everyone, regardless of what shape you’re in, but harder for some. We finished in six hours with a stop at the top for lunch and a stop at the end for a dip in Titou Gorge. There were people who took less time and people who took more time. Start early, pace yourself and take breaks as needed. If your joints aren’t up to the challenge, choose another hike. There’s no shortage of pretty trails for every level.

Have you done the Boiling Lake hike? What did you think?