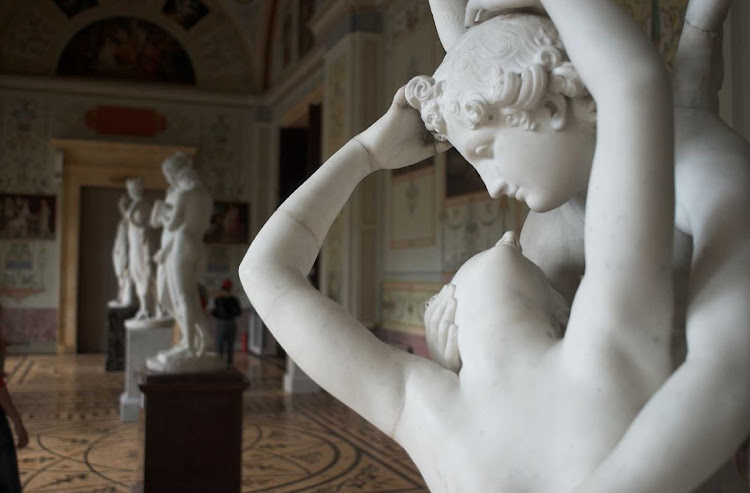 Now that tensions have eased a bit between the United States and Russia, cruises are returning to Russia's onetime imperial capital of St. Petersburg, long a prime destination for travelers seeking a one-of-a-kind cultural experience.

Commissioned by Tsar Peter the Great (1672–1725), St. Petersburg offers a dazzling display of golden spires, gilded domes, remarkable palaces and epic cathedrals. Built on more than 100 islands in the Neva Delta linked by canals and arched bridges, it's been called the "Venice of the North," and its lovely river banks recall the embankments of Paris. A city of golden spires and gilded domes, of pastel palaces and candlelit cathedrals, this city conceived by a visionary emperor is filled with pleasures and tantalizing treasures.

Although some pretty good shopping can be done on Nevsky Prospect — the main street in St. Petersburg for shopping and dining — I suggest that you first take advantage of some of the city's world-class attractions.

Here are 10 top attractions for visitors to see in St. Petersburg: 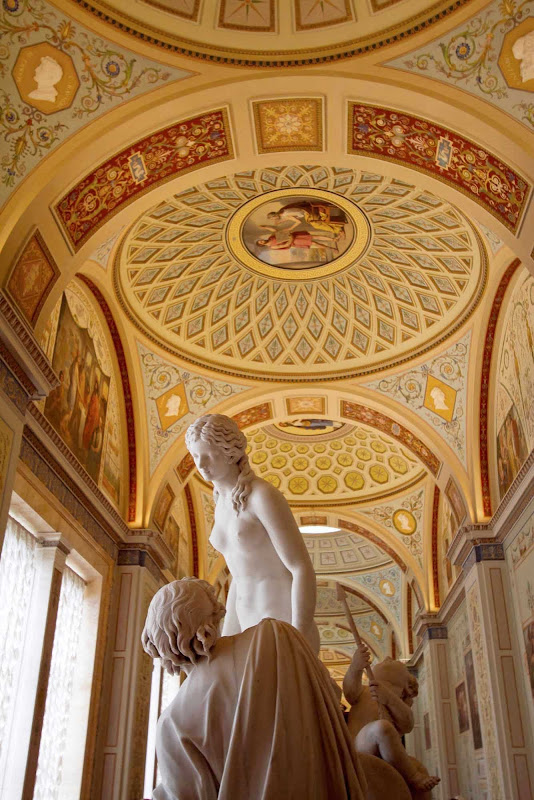 One of the most popular tourist stops is the Hermitage Museum. Founded in 1764 by Catherine the Great, it is one of the world’s oldest and largest museums, housing more than 3 million individual items as well as the world’s largest collection of paintings. 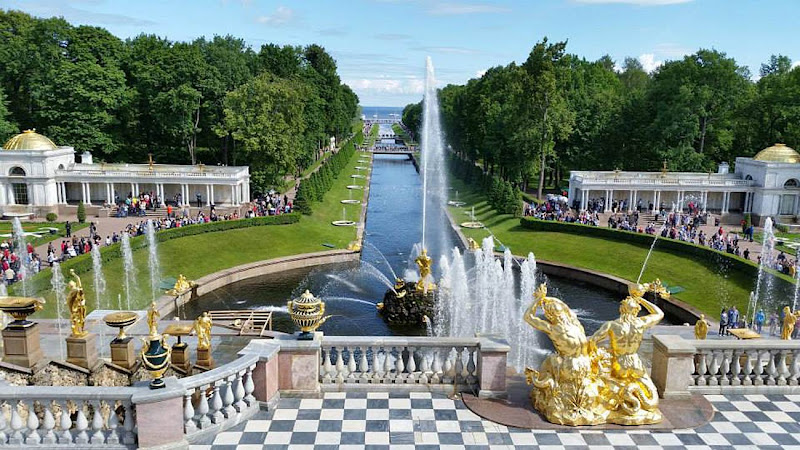 Danielle Fear / Special to CruiseableView of the grounds from the steps of Peterhof Palace in St. Petersburg, Russia.

If you'd like to head away from the hustle and bustle of the main city then you must take a trip to Peterhof Palace and Park, which is about 50 minutes away from the main cruise terminal (and advised to visit via organized excursion). The palace is absolutely stunning both inside and out, and the gardens are some of the best in the world.The main building of the Hermitage Museum is also St. Petersburg's most famous building: the Winter Palace. The Winter Palace physically dominates Palace Square and the south embankment of the Neva River, but it also plays a central political, symbolic and cultural role in the three-century history of the city. 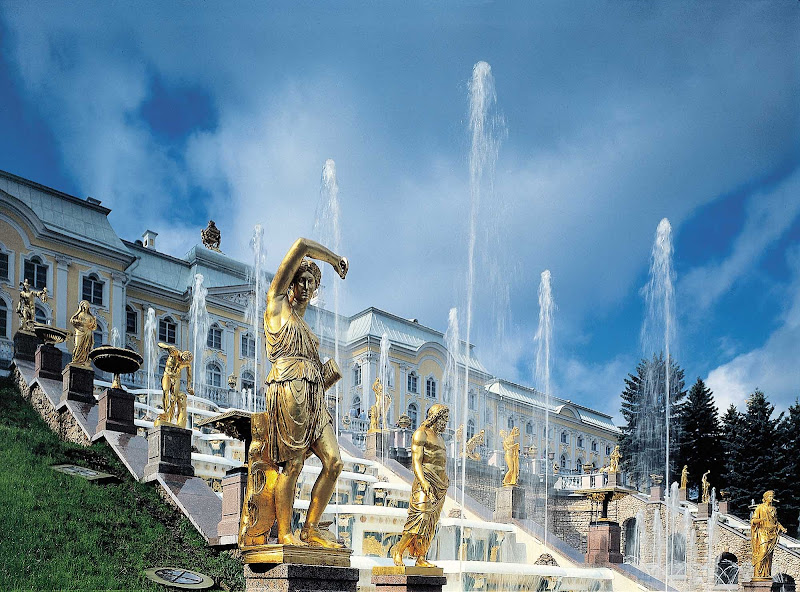 Courtesy of Royal Caribbean InternationalVisit the Grand Cascade at the magnificent 18th-century Peterhof Palace when your cruise ship calls on St. Petersburg.

Millions of people visit here every year just to see the Grand Cascade (Peterhof fountains), which runs from the northern façade of the Grand Palace to the Marine Canal and comprises of 64 different fountains and more than 200 bronze statues. At the center stands Rastrelli's spectacular statue of Samson wrestling the jaws of a lion. It really is a spectacular place to visit and one that will certainly leave you speechless. If you do wish to visit Peterhof and take in the beauty of the gardens, then note that during the summer months the fountains are turned on at around 11 am every day. I suggest you get there early in order to secure a good viewing spot as it really is a spectacle — it is also accompanied by grand music. 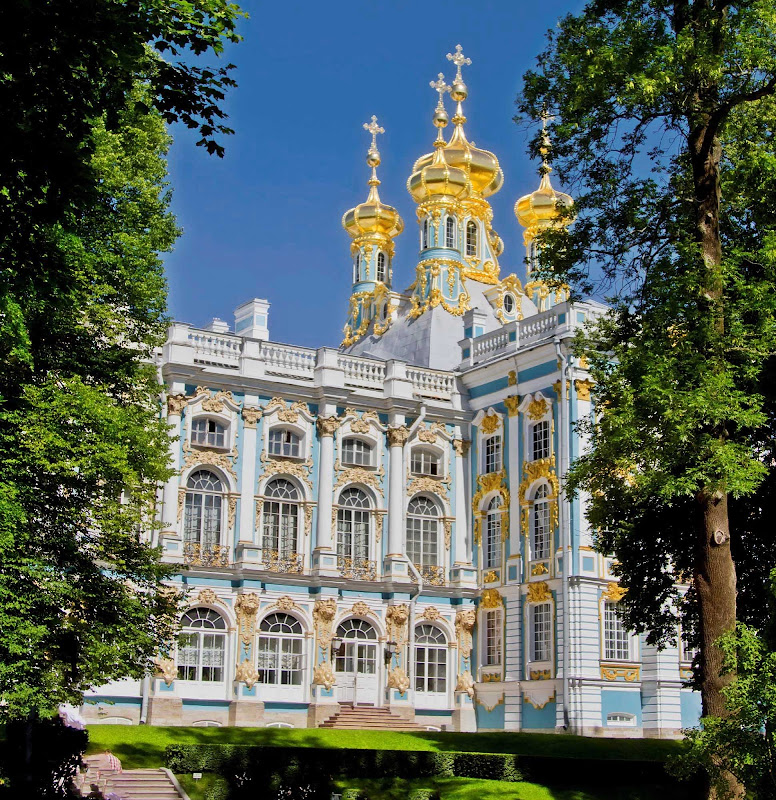 Another palace worth checking out is Catherine Palace, which is named after the wife of Peter the Great who ruled Russia for two years after her husband died. The palace was reconstructed in 1743 by four architects, but it was Bartholomeo Rastrelli, Chief Architect of the Imperial Court, who was instructed to completely redesign the building on a scale to rival Versailles. The resulting palace, completed in 1756, is elaborately decorated in blue and white and features gilded atlantes, caryatids and pilasters designed by German sculptor Johann Franz Dunker. 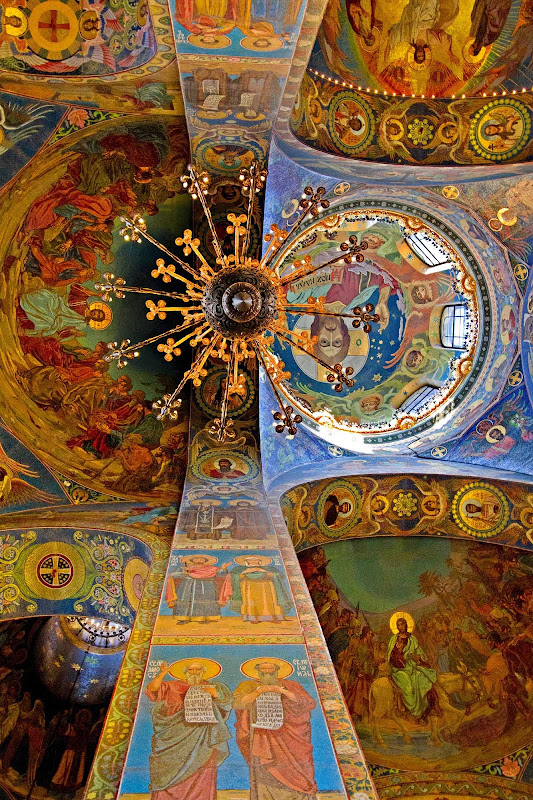 Jenna Lynn Pimentel / Courtesy of Azamara Club CruisesInside the Church of the Savior on Spilled Blood in St. Petersburg, Russia.

Church of Savior on the Spilled Blood

Speaking of attractions with elaborate and beautiful facades, you should visit the Church of Savior on the Spilled Blood, or Church on the Blood, which marks the place where Alexander II was fatally wounded in an assassination on March 1, 1881. Designed by Alfred Parland in the style of 16th and 17th-century Russian churches, the church is unique as it's surrounded by Baroque, Classical and Modernist architecture. 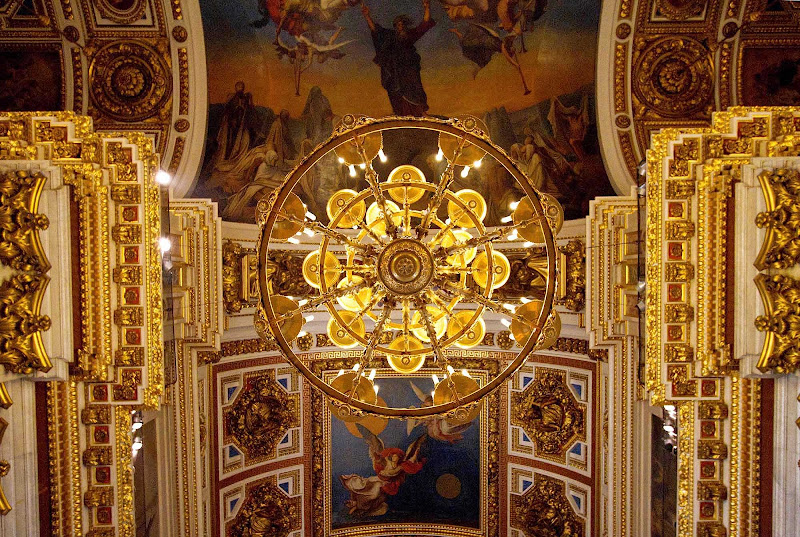 If you're a serious history buff, St. Isaac's Cathedral is another must-see. Originally the city's main church and the largest cathedral in Russia, St. Isaac's was built between 1818 and 1858 by the French-born architect Auguste Montferrand. Some 180 years later, the gilded dome still dominates the skyline of St. Petersburg. 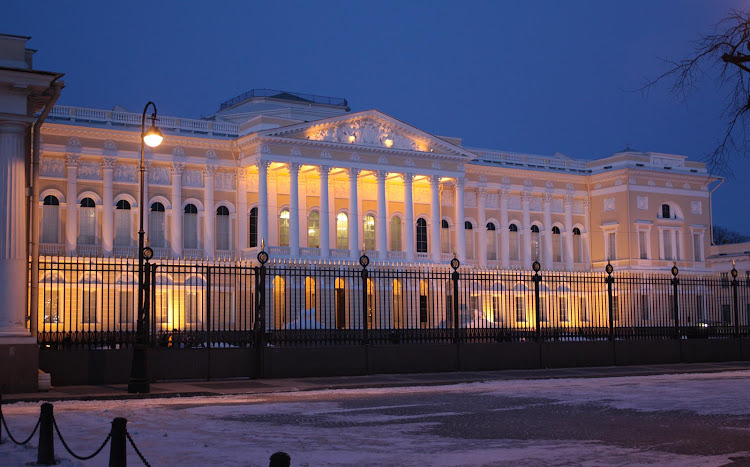 The Russian Museum is a must-visit in St. Petersburg. It's the first state museum of Russian fine arts in the country. Established in 1895, the museum today is a one-of-a-kind depository of artistic treasures, a famous restoration center, an authoritative institute of academic research and one of the major cultural and educational centers in Russia. 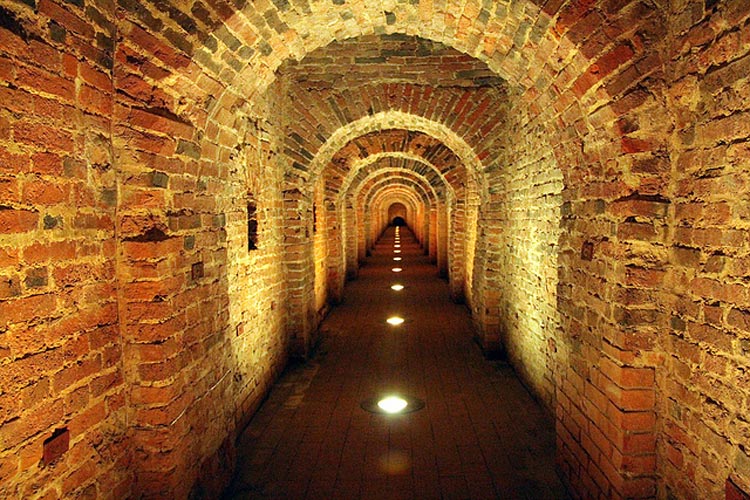 Peter and Paul Fortress was the first structure to be built in St. Petersburg, giving it ultimate appeal for those interested in the city's history. While the fortress itself is stunning, it also has served as a military base, the burial ground of the Imperial Russia's rulers (including the tombs of Peter the Great and Catherine the Great), the site of groundbreaking scientific experiments and a forbidding jail that held some of Russia's most prominent political prisoners. The fortress, along with the historic center of St. Petersburg, is a UNESCO World Heritage site. 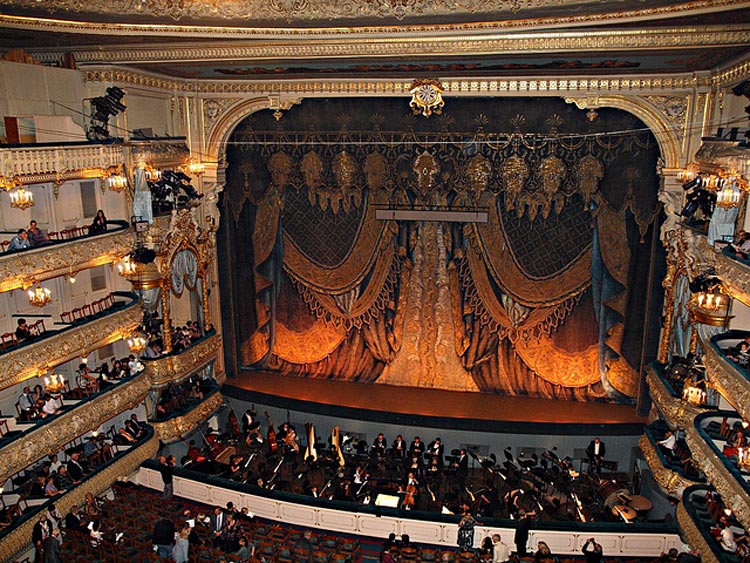 The Mariinsky Theatre can trace its history as far back as 1783, when a decree on the establishment of a theater committee “for performances and music” was published and the Bolshoi Stone Theatre was opened on Carousel Square. The theater gave the square its new name — even today it is known as Theatre Square.

Built according to plans by Antonio Rinaldi, the theater still staggers the public with the sheer scale of its dimensions and its majestic architecture and stage.

For No. 10, we'll combine the "best of the rest" into one item. You won't have time to fit in all of the above on a one-day port visit to the city, but if you're visiting St. Petersburg for a few days, here are some other attractions to think about.

Know before you go

Ships visit St. Petersburg usually between the months of May and September, the winter months in Russia can be ruthless, so exploring here is reserved through spring and summer.

St. Petersburg does have a problem with pickpockets, so you are advised to be extremely vigilant with your belongings, especially passports and wallets. Please always keep these items in either a hidden compartment on your bag on your immediate person but never in a back pocket on your trousers. If you lose your passport ashore you will not be permitted to get back aboard your ship.

The language spoken is Russian (natch) and the currency is the Russian ruble.

Popular local crafts include the Matryoshka Dolls (nesting dolls) which you can buy for between $6 and $2,000. Faberge is also a recommended buy along with genuine Russian vodka.

One thing to note about Russia is that every foreign visitor must obtain a Visa in order to proceed ashore independently. If you visit Russia and go ashore as part of an excursion that has been organized by the ship, then you do not need to apply for your own Visa. I recommend you check requirements with your cruise line long before you sail, this will allow you enough time to get your own documents together if you would prefer to go ashore on your own. It can take several weeks for a Visa to be approved by Russian officials.

Have you been to St. Petersburg on a cruise? Do tell! Please share a story, tip or discovery. What was the highlight for you? I'd love to know!

Did we mess up? What did we overlook? Be a co-creator!