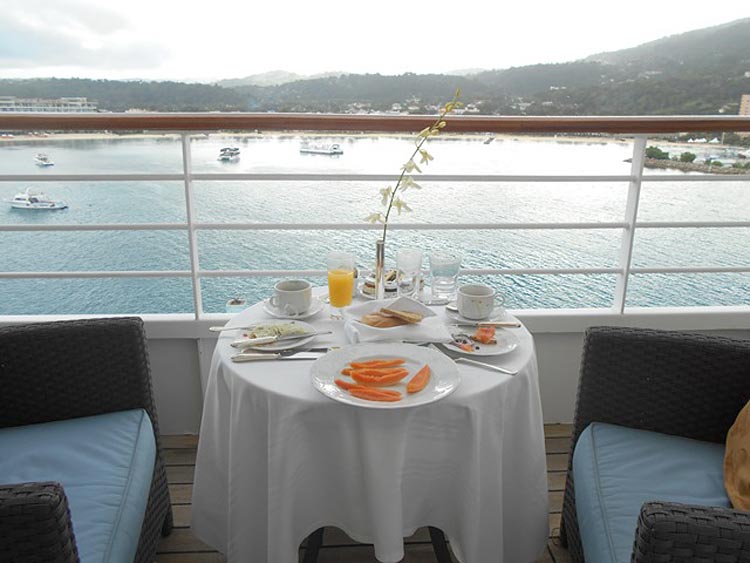 Breakfast is served on our veranda after Crystal Serenity's arrival in Ocho Rios, Jamaica.

Somehow Richard and I can never book a Christmas cruise on the ship we want in time as they always sell out fast. However, this year we decided on a pre-holiday voyage on Crystal Serenity. And as luck would have it, there were staterooms available — even a Penthouse Veranda. Let me tell you about it in case you're considering a holiday cruise for next winter. 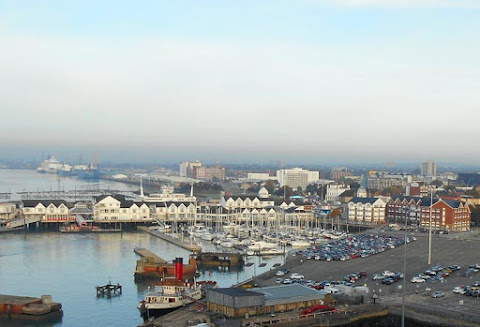 Richard Pietschmann / Special to CruiseableA glimpse of the port of New Orleans from Crystal Serenity.

The festive 14-day Caribbean cruise started in New Orleans on December 6  and ended in Miami. In between we stopped at warm, glorious tropical ports such as Grand Cayman, Ocho Rios, Willemstad (Curacao), Martinique’s Fort-de-France, Guadeloupe,  Gustavia in St. Barts and Grand Turk. We also had four delightful days at sea to immerse ourselves in the wonders of the Serenity, which we've sailed several times before. (Once we did 28 days on the ship and still felt like staying longer.)

The Crystal Cruises elves do a great job decorating Serenity with lots of tinsel, glitter and Christmas décor everywhere. For us, it felt a lot like Christmas on  board, even though we would disembark on Dec. 20, while many of our fellow passengers would stay through New Year’s Day and some even longer. 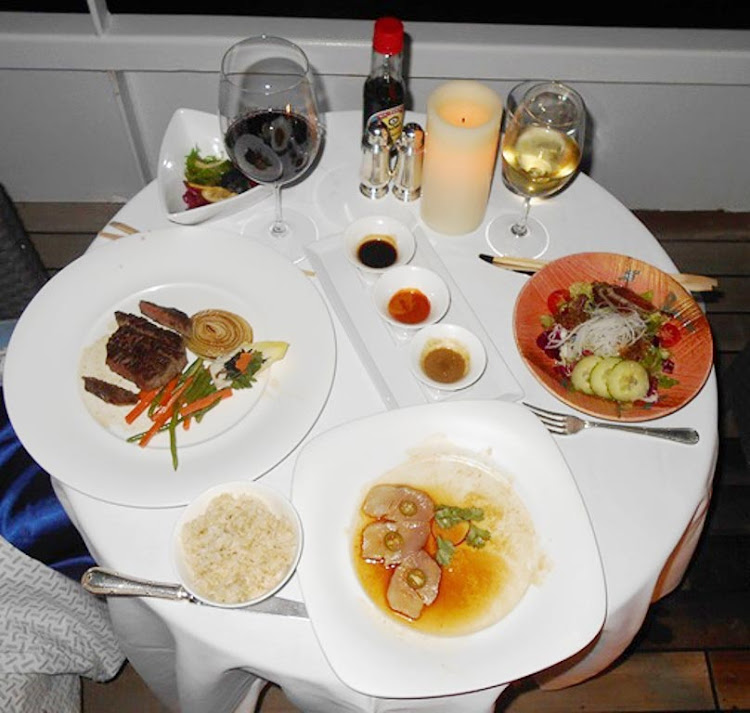 Richard Pietschmann / Special to CruiseableHere was the spread from Silk Road on our veranda as we were leaving Martinique.

Cuisine to die for

What makes Crystal’s ships so enjoyable? Everything from the warm and accommodating staff  to the excellent cuisine, facilities, amenities and Crystal's all-inclusive policy: All gratuities, wines, spirits and Champagne are included in the fare. 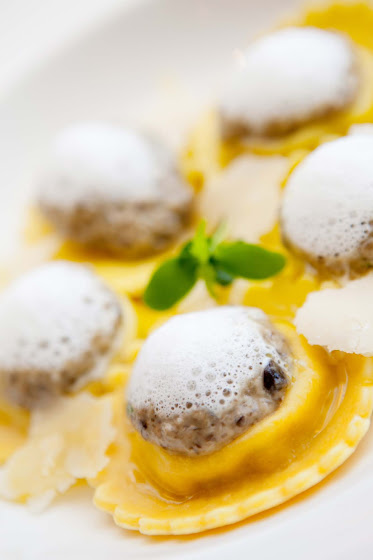 Henrike Schunck / Courtesy of Crystal CruisesRavioli becomes a work of art at Prego.

The ships are also great for us unconventional passengers who enjoy dining on full-course meals — not just a room service menu — in our stateroom frequently, which any passenger can do. Not only that, but when you’re booked  on one of the  Penthouse staterooms on decks 10 or 11, you can even order in from alternative dining venues such as the Nobu-inspired Silk Road and Los Angeles’s Valentino’s–style Prego, which we did. There is no charge for the first two times you go to either venue during a two-week cruise; there's a $30 per person surcharge for additional visits — and it’s well worth the price, especially considering that wines and spirits are free.

What's more, the food is so sensational that you want to keep on going back, which we did at both Silk Road and Prego (which by the way dishes out the best osso bucco this side of Italy). Every morsel is impeccably prepared to master chef Nobu Matsuhisa’s specifications. It's a culinary journey that begins with perfectly prepared tempura, a selection of outrageously tasty sushi and  continues through Asian selections such as the best crispy rice cake with spicy tuna tartar allowable by culinary law. The only problem is every dish is so good that you order more (and yes, we did). 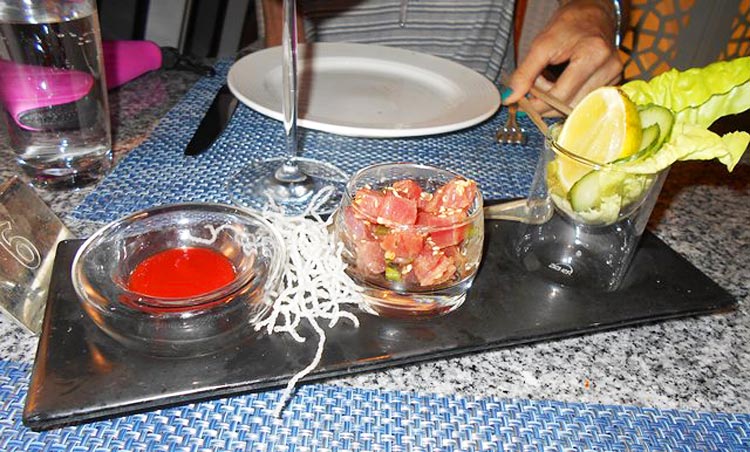 There is also another inviting dining area called Tastes, a super casual al fresco open-kitchen dinner venue on the Lido Deck that serves lunch and dinner.  Breakfast choices are many, from your stateroom (full meals) to the Lido Café, main dining room, Tastes and the Bistro, where baristas brew some of the best espressos, cappuccinos and lattes at sea. You have choices galore at lunch: spread out buffet style in the Lido, served at your table in the dining room, on deck at Tastes where you order from a small menu, in the Trident Grill where you can get beef, salmon and vegan burgers, wraps and snacks, and in the Bistro which doles out simple sandwiches and such. There is also a very popular and free Scoops Ice Cream Bar offering frozen yogurts and various ice cream concoctions.

We were delighted that our stay was handled by our favorite butler, Engin, a charming, efficient and unflappable Turk who knows our quirks and caters to our every vacation whim, such as our penchant for dining in our room. He also has a wonderful sense of humor. 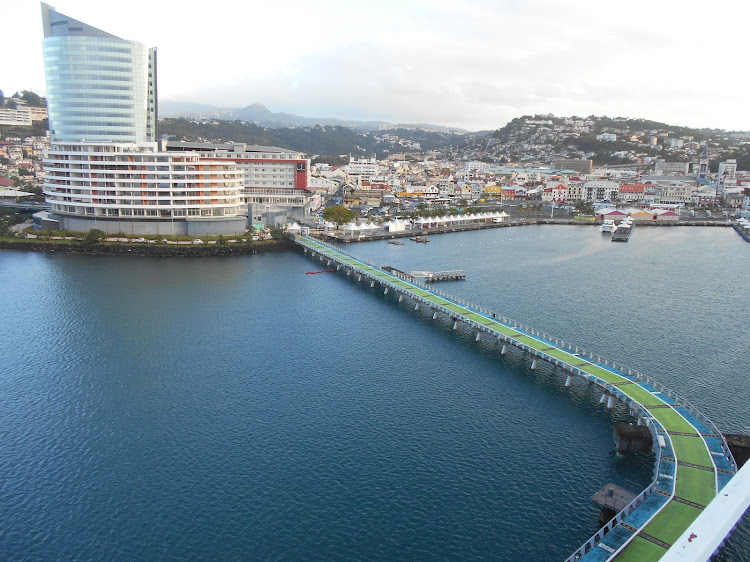 Crystal does a good job informing passengers about each port with talks that you can attend or watch on your TV. They also have extensive tour choices. For guests in Penthouse Deck suites, shore excursions are rolled into the vacation price; tours cost extra if you're not staying in a suite.

We’d been to all the stops before so we pretty much went off on own except for a snorkel excursion in Martinique. In St. Barts, where the ship anchors in the bay, we hopped on one of the first launches and did our usual stroll over to nearby Shell Beach for swims before and after lunch. In Guadeloupe we strolled through a charming market where merchants showed off their goods, including plenty of culinary goodies. In Grand Turk, where the ship docked, we jumped off as soon as the all clear was given and headed for a pre-breakfast swim in the toasty warm, crystal clear sea, and we went back after lunch. The beach has free chaise lounges for passengers as well as restaurants, bars and plenty of shops. 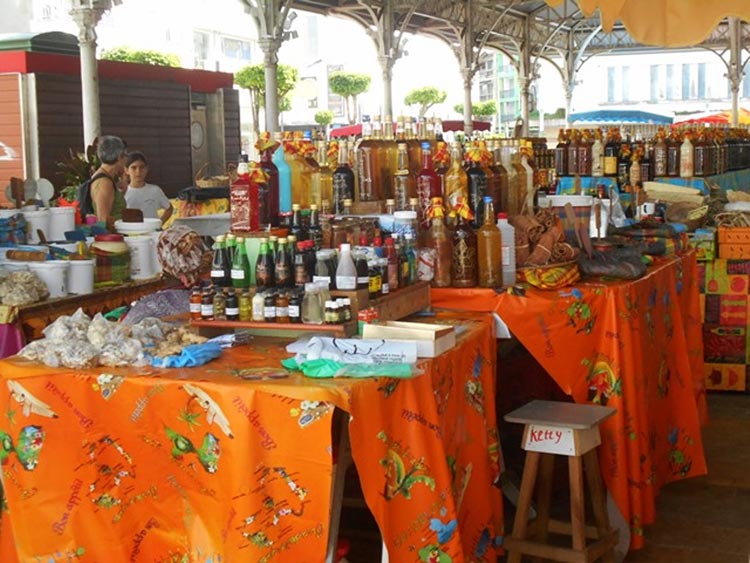 Richard Pietschmann / Special to CruiseableA market we visited in Guadeloupe.

Events conspired to prevent us from spending time in New Orleans before embarkation, but Serenity overnighted in the Big Easy, making it easy to get there on time without worry. We always carry our own bags on board (we don’t like waiting to unpack) but in typical Crystal Cruises fashion a steward or stewardess always grabs our luggage and escorts us to our room, in this case the veranda stateroom 10045.

The room was lovely, as always, with a big marble bathroom with a separate whirlpool tub, shower, twin sinks, Etro toiletries, fluffy robes, slippers and lots of storage space. The cabin also has plenty of drawers and walk-in closet space for me to store the overabundance of clothing I bring even though I know better, however this time I wore everything. The dress code was Crystal casual, with a couple of optional formal nights though few of the men opted for tuxes. The women did dress to the nines as did I. 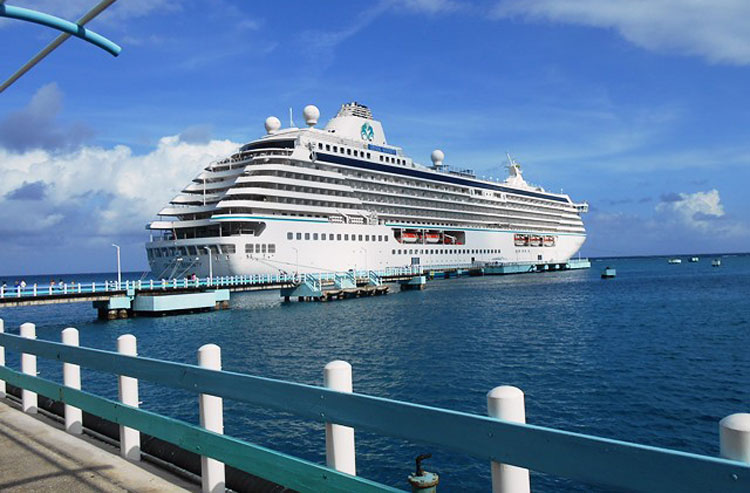 Activities galore on board

While we love tropical ports, we also enjoy being on the ship and doing our morning laps in the long pool, jogging around the deck, working out in the well-equipped fitness center, taking a steam or sauna after in the inviting spa (all of which are free). I did pop for a special $99 spa deal that included a mini manicure (basically paint removal and application), a foot massage and what they called an under eye treatment. Otherwise, prices set by Steiner, which operates just about every spa at sea, are a bit too pricey for me.

Serenity also has a mini golf range, golf cage, paddle tennis court, shuffleboard and a range of morning to late-night activities. The most popular extracurricular activities on Crystal are the  Computer University at Sea — where I learned much about Photoshop, use of the iPad and more — and the enrichment lectures, which this time didn’t  motivate us but many of the other passengers seemed engaged.

I love the nightlife

Nightlife begins before dinner at the various bars and lounges, of which all have some sort of musical accompaniment while you grab a cocktail. We hung out mostly before in the Crystal Cove piano bar, where a fine-tuned guitarist alternated with a  piano player. We also hit the observation bar-like Palm Court a few times, and this seemed to be the entertainment venue getting the most action.

Late-night tipplers hit the Pulse Night Club while others attended movies or stage shows. We went to a few and enjoyed the production but weren’t overly impressed. The singers, particularly the headline vocalist, and Billy Joel impersonator James Fox and dancers all did a fine job and a wry comedian brought a few laughs from the crowd. You're pretty much a captive audience unless you just prefer to read a  good book, watch a DVD in your cabin or surf the Internet. Internet packages are offered at various prices and some passengers get free time depending on their stateroom and past sailings. 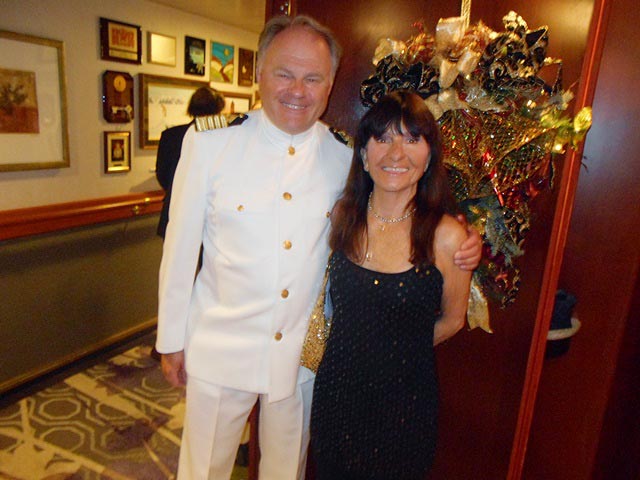 We spent some time with Master Captain Birger J. Vorland, a pure delight whom we met at a party in his quarters. He talked about being raised on a small Norwegian island and having seafaring in his blood from an early age. He joined Crystal Cruises in 2002 and became captain of its first ship, the Harmony, in 2003 until she was retired. He took over the helm of Crystal Serenity in 2012. And while he was born many miles away, he now lives in Los Angeles’s San Fernando Valley with his wife. 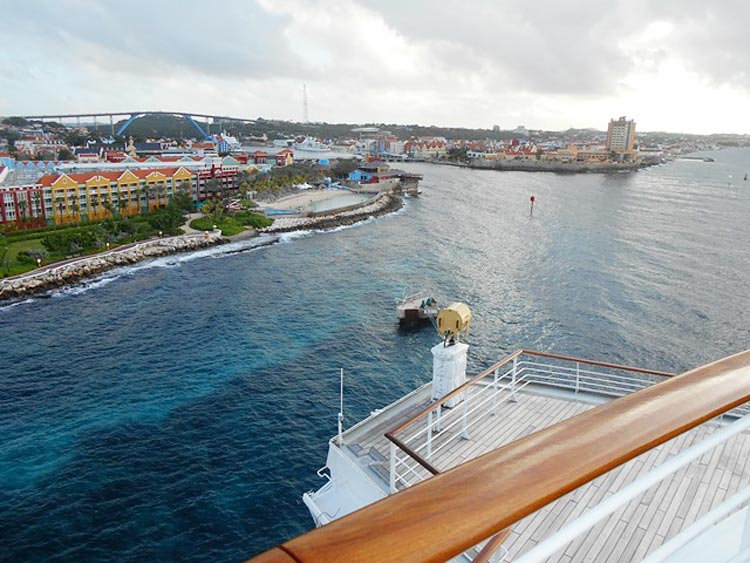 Our Crystal Serenity sailing was a hit with every passenger we chatted up. There was a couple from the Carolinas whom we had met on a different cruise line who couldn’t stop raving about the ship. Others praised the food, entertainment, staff and amenities. There were about a half dozen multi-generational families on board that included some tiny tots, a group of LGBTs, a couple of solo travelers and some young couples, one from San Francisco who were on their honeymoon.

Want to cruise on Serenity?

For the best prices and get value, contact Cruiseable's Business Department at 1-877-322-3773 or send our travel consultants an email with what you have in mind.