Dubbed the "Jerusalem of the Caribbean" for its cosmopolitan, multicultural influences, Curaçao has a fascinating colonial-Caribbean vibe thanks to 100-plus nationalities and three official languages: Dutch, Papiamentu and English.

Part of the former Netherlands Antilles, Curaçao (pronounced CURE-a-sow) today is an autonomous territory of the Netherlands. Though Dutch influence remains prominent, Curaçao’s proximity to Venezuela draws from Spanish culture, too. Though Aruba may be the best known as the “C” of the ABC islands (Aruba, Bonaire, Curaçao), Curaçao, is no longer under the radar. The island is currently enjoying a boost in international visitors seeking diverse experiences by land and sea.

The horizontal island nation of Curaçao is described as being shaped something like a bikini bandeau top — with each breast representing east and west, and the center broach the capital city of Willemstad. The west side, where beach coves scallop the coast is less developed, where many of the island's best diving spots are reachable from shore. The west is also idyllic for hiking, biking and camping. The east side meanwhile is much more developed, dotted with hotels and resorts. The south is where beaches enjoy calm waters. The island’s perimeters are largely rocky with some massive, visually stunning cliffs.

Cruise ships that call on Curaçao

Kelley Ferro has this 10-minute Insider's Guide to Curaçao through the tips of locals only!

Top things to do and see in Curaçao

Willemstad, a UNESCO World Heritage Site and the island's capital city is laid out in a grid-like fashion, with narrow, winding streets, where museums, pastel-colored boutiques and sidewalk cafes serving Dutch and Creole cuisine sit snug alongside one another. That quintessentially colonial visual is influenced first by the Spanish who conquered Curaçao in 1499, followed by the Dutch in 1634. The result is a Dutch aesthetic reflected not only by architecture but also by language and cuisine.

Willemstad is best explored by foot and easy to explore in a half day. The city's downtown area is reachable by foot from the cruise port, as are Mambo and Kontiki beaches.

Among the city's highlights is the floating market, a mini fleet of scrappy boats from which merchants from Venezuela sell fresh produce. Roughly a block away is the Queen Juliana Bridge and the Queen Emma, a floating pontoon bridge linking the city’s "Punda" (Point Side) and "Otrobanda" (Other Side) across the Sint Annabaai Channel. The bridge, a pedestrian thoroughfare, opens and closes to allow marine traffic into the St. Anna Bay.

Also be sure to check out Mikve Israel-Emanuel, the oldest continuously used synagogue in the Western Hemisphere, dating back to the 1650s. To remind congregants of how the Jews of the Iberian peninsula were forced to clandestinely observe, the floors are layered in sand, symbolic of the prior practice designed to muffle footsteps and keep away potential denouncers.

Although it has an arid, desert climate, Curaçao has attractions that focus on homeopathic plants and their holistic uses. The Aloe Vera Plantation is where CurAloe products hail. Their retail space offers the best prices for face and hair rinses, anti-wrinkle and aging creams, as well as the uber healing, aloe juice. Visitors can learn about the production process as well as sample and purchase the array of products.

For those seeking the healing powers of nature, there's the Den Paradera Herb Garden, home to Dinah Veeris, Curaçao’s celebrity healer. Miss Dinah has the impressive distinction of carrying encyclopedic knowledge of medicinal herbs and plants thanks to three decades of study and the cultivation of her own garden for nearly a quarter of a century. Tours are given by Dinah and her son. They include anecdotal stories about their homemade, homeopathic remedies which are used for treating everything from asthma and insomnia to depression, sexual energy and alopecia. 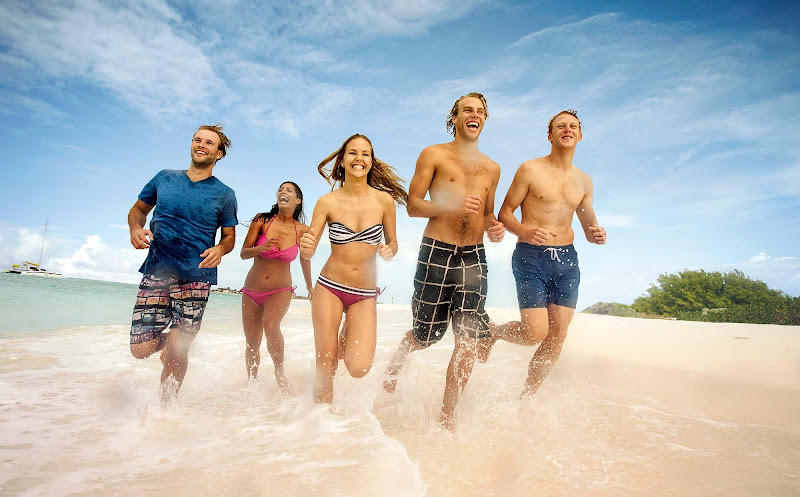 Courtesy of Curaçao Tourist BureauAt play along one of Curaçao's many idyllic beaches.

Snorkel and dive with Go West Diving. The aptly named venture focuses on the best side, the west side, for below-sea-level exploration and optimal visibility.

On the island’s north coast is otherworldly Shete Boka Park. Within it, Boka Pistol Trail leads to dramatic limestone cliffs that jut out over the roar of the sea. Along the path is a cavern known as Boka Tabla where carved steps lead to a shaded perch for close-up spray from crashing waves. Farther along is Boka Brown Beach, a depot for mama sea turtles who come ashore to lay their eggs.

Curaçao’s southwestern side is effectively one large coral reef and marine park, which includes Banda Abou National Park, a cool dive and snorkel spot. Many think of Bonaire as the dive spot, but Curaçao also boasts an impressive collection of dive and snorkel sites, from easy-to-access shore jaunts to coral drop-offs a short distance from the island's 38 beaches.

Playa Jeremi is a secluded beach epic for watching extraordinary sunsets. Playa Kalki, also known as “Alice in Wonderland,” has spectacularly well-preserved reefs. Playa Grote Kenapa (Big Knip) and Playa Kleine Kenapa (Little Knip) are tourist and local favorites. There are many island resorts, like the Santa Barbara Beach Resort, where visitors can spend the day enjoying the lovely, long stretches of man-made beaches. Those requiring something more natural can go au natural within one of the cove-like, crescent-shaped beaches that are so private that the TV show "The Bachelorette" was able to film without locals or tourists ever knowing.

Handelskade is a lineup of those colorful Dutch Colonial buildings flanking the Willemstad harbour and home to whimsical boutiques and cafés. Check out local artist Nena Sanchez’s gallery for the requisite tropical painting. Those feeling super dushi know it's a sweet compliment as n Curaçao, dushi means sweetie. That said, Curaçaons are in on the cheeky double meaning of the word and sell kitschy beachwear at Super Dushi. The island's famous chubby chichi figurines are ubiquitously sold, but can be bought from the local artist Serena herself at her art factory.

The Curaçao Ostrich Farm is the largest breeding facility outside of Africa and a purveyor of the lean meat and those giant eggs. Tours give visitors an up-close and personal meet-and-greet with the plucky, oft wacky behaviored birds. There are other family friendly activities depending on how adventurous everyone is. Think: jeep safari tours, paragliding, flyboarding and, for cave lovers, the stalactite- and stalagmite-packed Hato Caves. Those who want to take it easy can grab those day passes and explore the Santa Barbara Beach & Golf Resort and Papagayo Resorts where both have developed entertaining children’s clubs. 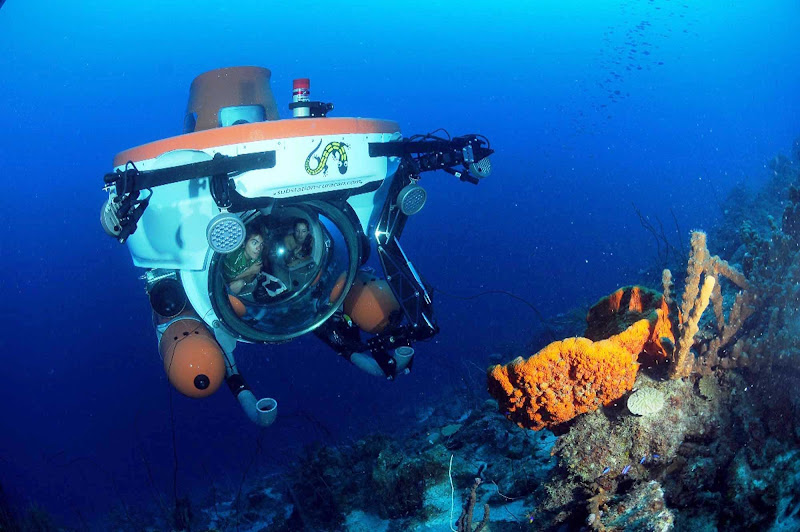 Snorkeling and scuba diving excursions are available throughout the coastal world; however, visitors on this particular island can take underwater exploration to the Jacques Cousteau level by descending as much as 1,000 feet below the surface of the sea in a substation with Curasub. Used for marine research and adventure tourism, the craft accommodates a pilot and two passengers, who the latter rest stomach down on sub beds for face-to-fish viewing of sharks, eels, butterfly fish, lion fish, along with large and small balletic schools of fish, and sunken ships. The craft passes flourishing ecosystems and reefs lit by sun until reaching the quiet of the deep sea darkness of the ocean floor.

Mt. Christoffel is the highest point on the island, offering epic island views that reach as far as the neighboring islands on a clear day. There are eight hiking trails of varying lengths and difficulty inside Christoffel National Park. There's a two-and-a-half-hour climb to the peak, which is the most challenging of the eight. Along the way, hikers may encounter iguanas, the Curaçao white-tailed deer and a dazzling collection of wild orchids and bromeliads. 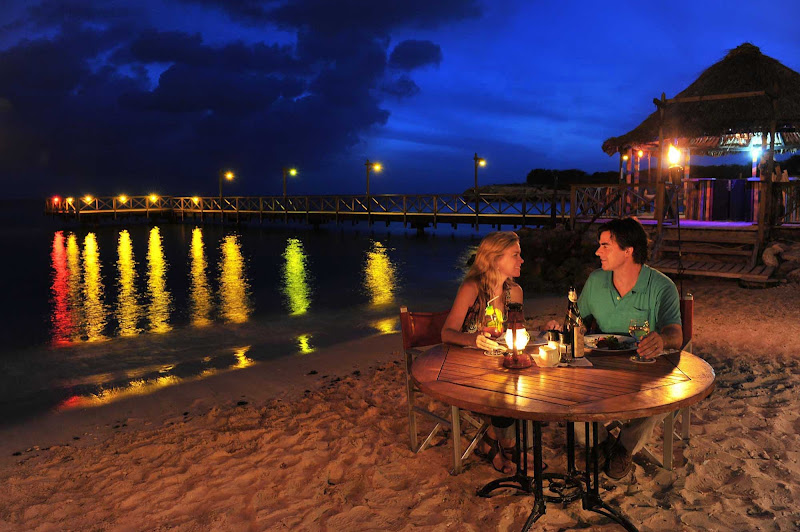 Courtesy of Curaçao Tourist BureauWho can resist a romantic meal just a few feet away from one of Curaçao's beautiful beaches?

Kalki Beach Bar & Grill is a favorite lunch spot with light fare and beachy drinks. Overlooking a cliff is Watamula Restaurant, where diners eat under an open-air, thatched-roof hut that looks out with panoramic views of the water.  For those wanting some true island flavor, there are the food stalls of the Plasa Bieu market. Find Yvonne de Plaza within the market for goat stew, fried red snapper with polenta and okra soup. And just outside the Plasa Bieu is a truck that sells batidos (smoothie-like drinks). Our favorite: Tamarind! Within the floating market are edible options tourists and locals peruse from fresh fish to fruits and vegetables.

For a fine-dining experience, allow Chef Heinrich Hortensia to cook for you at Shore American Seafood Grill, where specialties include pan-fried lionfish and a ceviche red snapper. There’s a Chinese influence growing in Curaçao. What used to be the “triangle of life” (church, school, cemetery) is now something of a square with islanders' joking addition of the many Chinese restaurants. (Locals swear by Safiro  located near the airport and Lam Yuen in Willemstad.) Can't resist the classic touristy recommendation? Well, Fodor's suggests making a reservation at hot spot Restaurant & Café Gouverneur de Rouville. The restaurant is housed in a historic building dating back to the 1700s and offers lives music, courtyard seating, and picture-perfect views of the waterfront.

Travel to Curaçao is year round, although it gets incredibly hot during August and September. December and January are rainy season, when storms typically come in strong, last less than an hour, and end in a rainbow. 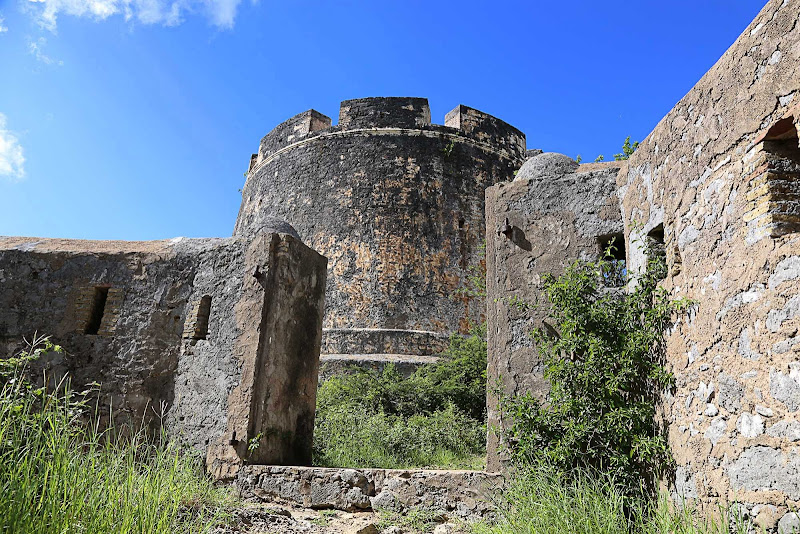 Courtesy of Curaçao Tourist BureauOne of Curaçao's still standing eight forts — relics of centuries past when the island was on the defense, armed and ready to ward off pirates and privateers.

There are two main docking spots for cruise ships:

Walk in Willemstad but otherwise this is a car island. While there are bikes to rent and some bike lanes, most people cycle for sport not transport as temperatures get too hot. Hiring a driver is the best option. Little Larry has solid skills behind the wheels and melodic vocals to match. His rates are $40 per person for half a day and $55 for the whole day: [email protected]. Emlyn Pietersz, formerly a journalist, today is a highly knowledgeable downtown city tour guide: [email protected].

Passport: All U.S. and Canadian citizens need a valid passport.

Currency: The Dutch Antilles Guilder, but the Euro and U.S. Dollar are also accepted.

Tipping: Tipping in most service establishments is expected in the range of 10%-15% of the total bill.

Safety: Curaçao is generally considered a safe island. That said, always be aware of your surroundings and don't flash lots of money or expensive jewelry. Keep your valuables and most of your credit cards safely locked up on your ship.

Have you been to Curaçao? Please share a tip or discovery. What was the highlight? Let's swap stories.

“With its eight hiking trails and 20 miles of twisting, single-lane driving paths, Christoffel National Park is just one stop on my outdoor adventure that also takes me to the rocky northern coastline, bat-filled caves with ancient Amerindian paintings, and up-close views of flora and wildlife, all within a short drive ... of Willemstad.”

“Make sure to wear sneakers, or you won't get to hike up to Seru Bientu (Windy Mountain) to see one of the best panoramic views of Curaçao and beyond.”