Grand Turk is one of 40 islands that form the Turks and Caicos archipelago, a British overseas territory in the Caribbean. This small island — 7 miles long and 1.5 miles wide — is bursting with turn-of-the-century Caribbean charm and a sunny vibe: In an average year, Grand Turk has 350 days of sunshine. Cockburn Town, the seat of government since 1766, is where nearly all the island's 3,700 inhabitants live.

It was in Grand Turk that Christopher Columbus first made landfall on his initial voyage to the New World in 1492. Today, Grand Turk and the surrounding Turks & Caicos islands are considered among the most beautiful in the Caribbean. 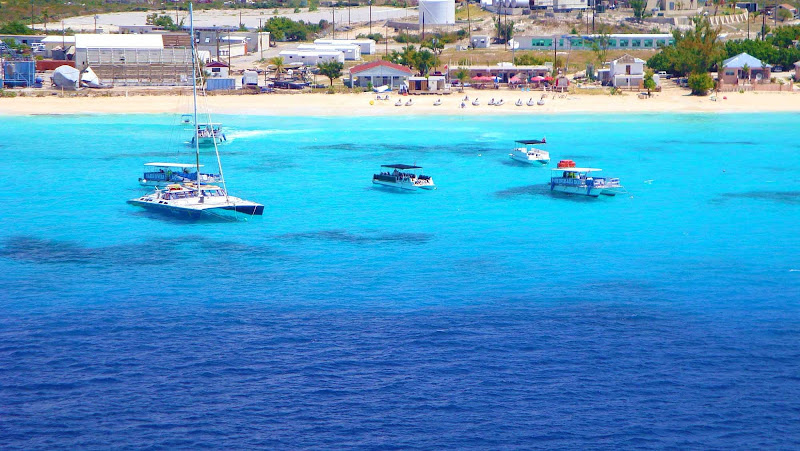 gerandlg / Creative Commons BY-SAHouses and hotels line the shoreline on Grand Turk in Turks and Caicos.

Things to see & do on Grand Turk Island

Historic 18th and 19th century architecture line Duke and Front streets in Cockburn Town. The town is known for its long, narrow streets and antique street lamps. Cockburn Town is home to the Turks & Caicos National Museum, located in the colonial-era Guinep House, right on Front Street. The house is over 150 years old and is made of salvaged materials from shipwrecks, including a ship's mast.

On the opposite end of Grand Turk Island is the Lighthouse (the only lighthouse in Turks and Caicos), a pretty spot to explore. In between, you will find lovely beaches such as Governor's Beach, Cockburn Town Beach, Pillory Beach, East Side Beach and White Sands Beach. Just a mile off the coast of Grand Turk Island, you can snorkel and dive in several locations, such as The Wall and Gibbs Cay.

Cruise ships at Grand Turk dock on the southwestern tip of the island at the new pier. You can walk directly into town.

Getting around:  Taxi fares are charged per person, according to set zone fares set by the local government. The island is split into four zones, with charges ranging from $4 to $10 per person.

Tipping:  At restaurants, tip 15% if service isn’t included in the bill. Taxi drivers also expect a token tip, about 10% of your fare.

Safety: Grand Turk is a safe island, with a peaceful past. As always, be aware of your surroundings and lock up your valuables.

Have you been to Grand Turk? Please share a story, tip or discovery. What was the highlight for you? Please share in the comments below.

“To see a bit of Grand Turk outside of the cruise center, book a snorkeling or diving trip in the pristine waters off the island. If you want to stay dry, wander the charming old Caribbean streets of Cockburn Town, an area replete with rustic charm. ”