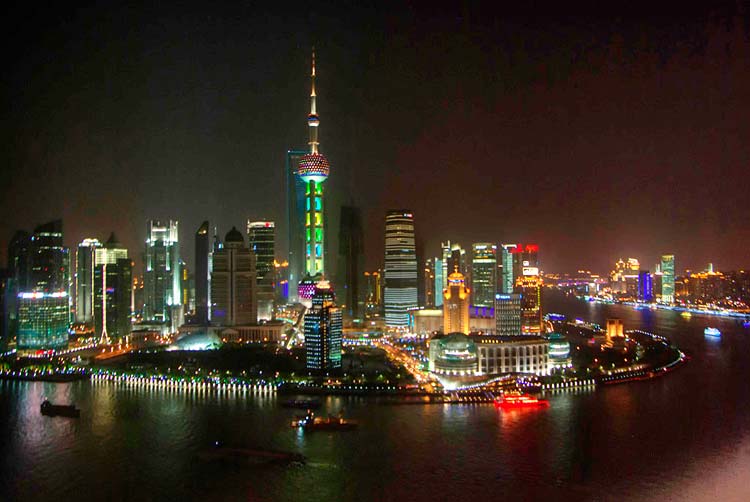 The view of the Shanghai skyline from the Vue Bar on the 32nd & 33rd floors of the 5-star Hyatt on the Bund, one of the world-class rooftop bars in our roundup.

Head to these luxurious global hotspots for mesmerizing vistas

When you're traveling to some of the great world-class cities, either on a cruise, a business trip or on a fast-paced getaway, there's nothing like unwinding with a cocktail in hand, a wisp of fresh air and a sunset or starry night to make the evening complete.

We've rounded up 6 global hotspots that offer plenty of gorgeous rooftop sights along with plenty to nosh and drinks to sip. These luxurious rooftop bars offer mesmerizing, panoramic views, proving that sometimes the best bar experiences occur way up in the sky. 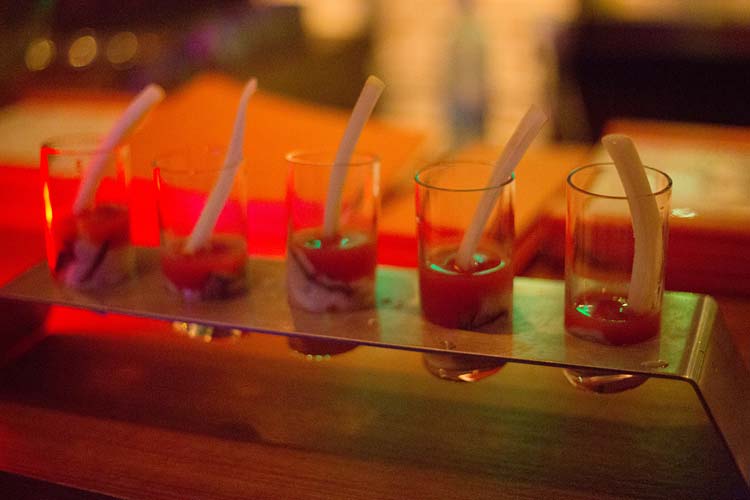 Andrew Pyza / Creative Commons BY-NC-NDBloody oysters in the Vue bar at Hyatt on the Bund in Shanghai.

The Huangpu River and the area of Lujiazui never looked quite so lovely than from the Vue Bar at the Hyatt on the Bund in Shanghai, China. For its guests’ viewing pleasure, the Hyatt's 32nd and 33rd floors punctuate the city’s skyline to create a hangout spot that rivals the best in the world.

To take its experiences up a notch, the al fresco spaces of the bar’s top level are lavishly furnished with daybeds for relaxing. You’ll also find a whirlpool to soak away life's hassles. And with an extensive menu to suit, the Vue Bar is a great way to enjoy a night on the town for cruisers who don't have to be back on the ship at dusk or other travelers. 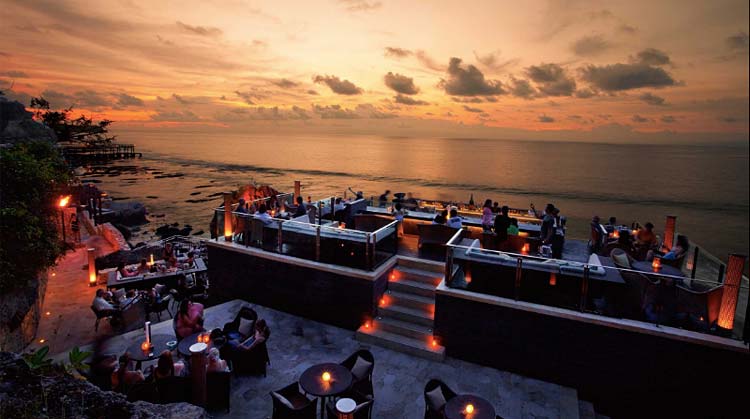 The Rock Bar takes its “on the rocks” specials literally with a dramatic location clenching onto a cliff on the edge of the Indian Ocean. Rising some 45 feet high, visitors are privy to majestic visions of the ocean that extend as far as the eyes can see while the waves crash against the shoreline in a melodic rhythm.

Always ready for a photo op, the Rock Bar has a beautiful backdrop that perfectly complements its sleek design seamlessly, earning it a designated spot in The Yak magazine reader’s awards as “Bali’s Best Sunset Venue.” After you've made the not-too-difficult climb, reward yourself with a bite and a sip of the Rock Bar's exotic cocktails drenched in local fruits, then take in the beautiful panoramic setting from its wooden decks. 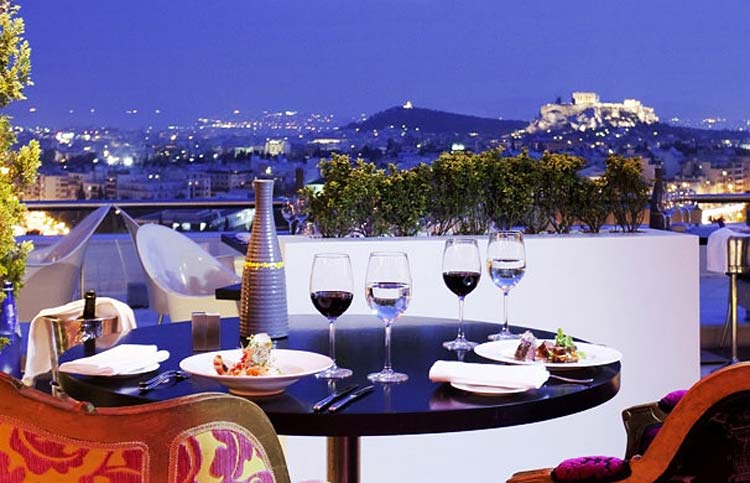 By the way that the stars glimmer right above your head, the Galaxy Restaurant & Bar in Athens, Greece, is a suitable name for this glitzy hotspot. Everyone is made to feel like a celestial being here with delicious foods and beverages right at your fingertips while you survey the city’s epic landscape, including the Acropolis.

While you're here, sample the authentic Mediterranean cuisine and boutique-brand drinks while listening to modern music while taking in the views from the open-air terrace. Galaxy has recently been  ranked as one of World's 10 Best Rooftop Bars by Premier Traveler magazine. 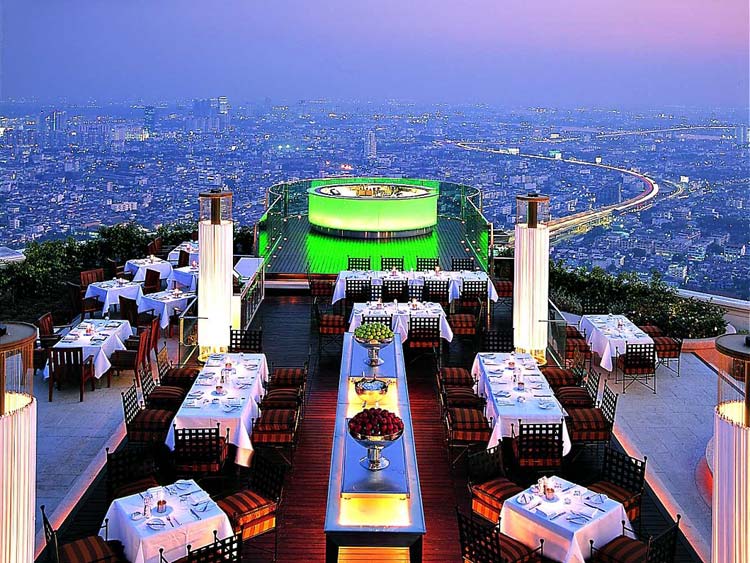 Wow! If you’re traveling in Bangkok and wondering where to enjoy a night under the stars, head to the Sky Bar in Lebua Hotel & Resorts. Suspended on a precipice above the city with an elevation of 820 feet in the air, Sky Bar is one of the highest rooftop bars in the world.

Along with offering the best views Bangkok has to offer, the Sky Bar's stylish digs and innovative cocktails have made it a highlight of the Bangkok nightlife scene. In summer try the Poptails, a concoction of cocktails and popsicle ice. Any time of year, try the Hangovertini, which was created for the cast of “The Hangover Part II” while they were filming at Lebua. The Sky Bar has raked in a number of prestigious awards, including one of “the world’s best rooftop bars” by Harper’s Bazaar UK, as well as being named “the most stunning rooftop bar you’ll ever see” by the New York Times.

Courtesy of 1-AltitudeThe view atop 1-Altitude, the rooftop bar in the One Raffles Place Building, Singapore.

The name speaks for itself. That’s because 1-Altitude is the highest location in a country known for its grandiosity. The venue offers not only  that not only offers a wide range of adventurous drinks but also a European restaurant and a sports bar with a golf simulator, in addition to the al fresco 1- Altitude Gallery & Bar. Guests are free to wander through its three floors, which have been perfectly placed in the upper levels of the 925-foot-high One Raffles Building.

With an eye to satisfy many different lifestyles, 1-Altitude is the ideal place to be if you’re looking for an oasis above Singapore’s streets. Whether you’re a sports fan or a cruiser who just wants bragging rights back on the ship, this one-of-a-kind interactive bar has it all.

On the roof of the Ink48 Hotel at 653 11th Ave. in Manhattan, the swanky Press Lounge bar features 360-degree views of New York and the Hudson River.

Concoctions of every color and taste blend in with the lounge’s modern décor, which is highlighted with walls shimmering in glass that brings New York's cityscape indoors. Visitors to the city frustrated with snarled traffic and crowded streets can look up to the Press Lounge for a luxurious escape. With a nod toward its hip atmosphere, even New York Magazine took notice and voted it “Top New Rooftop Bar.”

— Republished from an earlier date, compiled from Cruiseable news sources