Bangkok travel guide: What to do & see

Virtually everything about Bangkok is amazing. The gorgeous beaches, fast-paced nightlife and exquisite Thai cuisine are capturing the hearts and minds of visitors everywhere. It is only in the past few years that travel to Bangkok has really exploded. But now that it has, watch out.

Transportation and amenities in Bangkok have been upgraded, and the city has a newfound safe and comfortable feel to it that it did not have before. The atmosphere is exciting and modern, and the shopping facilities are tremendous. The bazaars are intriguing, authentic and varied, and the shows and clubs are fantastic (as long as you exercise a certain degree of caution).

Cruise ships generally call on the port of Laem Chabang, on the Gulf of Thailand, two hours south of Bangkok, and travelers reach Bangkok by bus or shuttle. Smaller ships dock at Klong Toey on the Chao Phraya River on the outskirts of Bangkok. 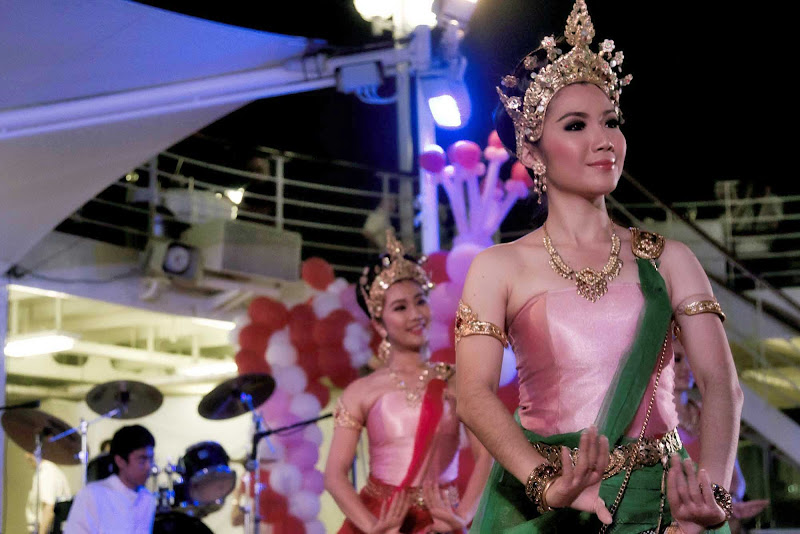 Jenna Lynn Pimentel / Courtesy of Azamara Club CruisesElegant dancers offer a glimpse into Thai culture with the Bangkok Thai show on board an Azamara cruise.

Top things to do & see in Bangkok

The Dusit Zoo at Ratchawithi Road (02-281-2000) is home to a variety of extraordinary animals. Wildlife indigenous to Thailand, and not seen anywhere else on Earth, can be found here. The royal white elephants are magnificent, and a favorite activity is to rent a paddleboat and cruise along the pond. The area is wonderfully scenic, and children love the zoo because of the elephant rides and exotic life that abounds.

Wat Saket is a picturesque mountain located at Ratchadamnoen Klang and Boriphat Roads. The climb is relatively short but the scenery is absolutely spectacular. This is a wonderful hike, and for nine days in October and November an enchanting temple fair is held around Wat Saket. A carnival of epic proportions is held, complete with animal circuses, theater, "freak shows" and other weirdness. It is an incredible experience, and if you happen to be in Thailand during this time of the year, a trip to Wat Saket is a must.

The Grand Palace, near Sanam Luang (02-222-8181), is the premier sightseeing destination in all of Thailand. It is one of the oldest buildings in the land, a splendid edifice that was constructed in the 1780s. The king resided here until 1946, when the Chitralada Palace became the official residence of the royal family. Today the Grand Palace is used for dignitaries and for royal ceremonies. The most important ceremonies are held at Amarinda Vinichai Hall, right next door to the Grand Palace. It's an ornate and enthralling site that is of interest as a memorable historical site and a flamboyant piece of architecture.

Bangkok is a city of important temples, and they’re all connected symbolically to the Palace, a complex of about 100 buildings. There’s a dream-like quality to any stroll through the Palace grounds with its gilding, its polished tile, its guardian statue figures and ubiquitous light catching shards of stone and mirror connecting the temples and palaces.

The city is home to several shopping malls. Bangkok has some of Asia’s best values in textiles, crafts, art and custom tailoring. The most famous name in Thai silk is the late American Jim Thompson, whose house is home to a legendary silk museum and shop.

The Shangri-La Hotel Lobby Lounge, at 89 Soi Wat Suan Plu (02-236-7777), is a great place to have a cocktail and enjoy live shows. The performances are typically soft music and light pop, which is relaxing after an exciting day of sightseeing.

Thai boxing is excellent entertainment if you enjoy this violent and competitive sport. One of the best places to see boxing matches is the Ratchadamnoen Stadium (02-281-4205). Gambling on the matches runs rampant, so know what you are getting into before you take any action with the locals. At Lumpini Stadium, on Rama IV Road (02-251-4303), the programs are as outlandish as they are exciting. The bouts often get quite intense, but the area is well patrolled and quite safe.

Calypso, at 296 Phayathai Road (02-261-6355), is a fun place to catch a cabaret show. The sets and costumes are dazzling. As popular as the sex shows, go-go clubs and bars in the red light district may be, we'll skip this topic except to note that Patpong is the most sought-after location for these types of places. Please exercise extreme caution if you happen to venture into one of these seedy joints.

You're in Bangkok, so go Thai! The Suan Lum Night Bazaar in Lumphini is a great place to indulge in street food and for a five-star meal up above the clouds head to the Lebua Hotel’s rooftop restaurant and bar.

The Normandie Grill, at 48 Oriental Avenue (02-236-0400), is perhaps the most elegant dining room in Thailand. The dinner menu changes often, but each night the courses are set by the chefs, and you are in for a real treat if you try the beef filet. Reservations, a jacket, and a tie are all required.

Spice Market, at 155 Ratchadamri Road (02-251-6127), is the hot spot for superb Thai food. The menu rates everything according to degree of spiciness, which is a great feature for those who are inexperienced with Thai cuisine. The roasted duck and fried beef will make you want to get up from your seat and do a dance. All the food is bursting with flavor, and it is presented in an artful fashion that adds even more pleasure to this outstanding dining adventure.

The Seafood Market and Restaurant, at 388 Sukhumvit Road (02-261-2071), may have the best seafood in all of Bangkok. Try a fresh fish dish grilled with Thai seasoning. Stick to relatively standard marine life and you will be in for a real treat.

According to the World Meteorological Organization, Bangkok is the world's hottest city. Just 14 degrees north of the equator, Bangkok is sunny at all times of the year with temperatures over 86°F.

The most pleasant time to visit is the cool season that lasts from November to February. It is both the coolest and driest period. Daytime temperatures still hover around 86°F, but it does cool down into the lower 70s as it gets dark. March and April represent the hot season — 95°F on average — but don't be surprised to see heat indexes rising into the 120°F+ range. Avoid this time of year if you can. The wet season runs from May to October. Expect massive downpours resulting in floods all over the city, and spells of thunder at times. 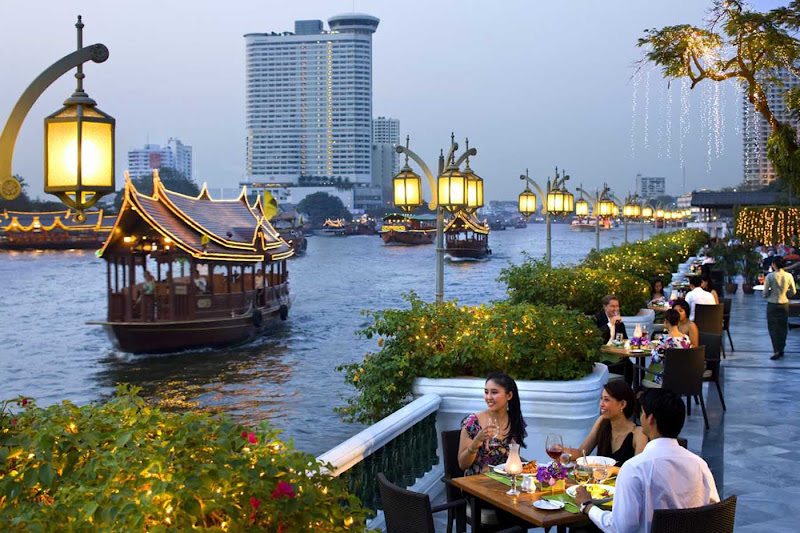 Large cruise ships must dock at Laem Chabang Port, about 90 minutes southeast of Bangkok. A taxi service desk is available on the wharf but charges extortionate prices for a trip to Bangkok, a whopping 2,600 baht (about $80) to charter a taxi (four passengers), or about 5,000 baht to charter a minibus (usually 11 passenger seats). Slightly lower prices can be found by walking out to the main road, about 4,000 baht for a minibus, but even these rates are still almost double the typical rate in the opposite direction.

Smaller ships may dock further upriver at Khlong Toei Port, close to Bangkok's city center. A modest terminal provides processing for passengers (who may receive Thai customs and immigration processing on board).

The primary method of transportation while in Bangkok is the buses. Although navigating the streets of Bangkok is a challenge, once you familiarize yourself with the labyrinth of bus routes, you'll be on your way. Taxis are also available, but expect to pay a hefty fare, as taxis are not only expensive but your trip through the notorious Bangkok traffic will be a long one, as well. Overall, your best bet in Bangkok is simply walking.

Language: Thai is the official language, but English is usually understood in the major tourist areas.

Currency: The baht is the official currency. Major credit cards are widely accepted, but local money will come in handy in market stalls.

Safety: Given its size, Bangkok is surprisingly safe, with violent crimes like mugging and robbery rare. One of the biggest dangers are motorbikes that ride on pavements, cart through traffic and speed through red lights.

Bangkok does have more than its fair share of scams, and many individuals in the tourist business do not hesitate to overcharge unwary visitors. As a rule of thumb, it is wise to decline all offers made by someone who appears to be a friendly local giving a hapless tourist some local advice.

Have you been to Bangkok? Please share a story, tip or discovery. Do you have any recent photos? What was the highlight for you?

“After dark I often head to Jazz Happens, on the hipster strip Phra Athit,  where everyone dances around the band.  ... On Friday night I usually grab a cocktail on the two-story porch at Oskar, a clubby lounge overlooking busy Sukhumvit Soi 11.”