Virgin Gorda is the third largest island in the 60-isle British Virgin Islands archipelago. Still, it's not all that big, about eight square miles. That means mega-cruise ships don't call on Virgin Gorda, but small and medium-size ships such as SeaDream I, Azamara Journey and Ocean Princess  do.

Virgin Gorda's most famous attraction, The Baths, which is a national park, ranks as one of the most dramatic spots in the Caribbean. At the edge of the beach are pools surrounded by giant granite boulders, creating grotto hideaways that could be the ticket for couples looking for romance. Just be aware that its popularity means that secluded spots can be difficult to come by, especially at mid-day. Crowds or not, the water here is the stuff of Caribbean posters and dreams, and just to linger in it for awhile is a treat.

The southwestern part of the island is known as the Valley. In this area of low, gentle hills are the majority of the population, businesses and services, mostly in and around Spanish Town, the capital. Below Spanish Town, landscape and seascapes are strewn with granite boulders the size of houses; these provide dramatic settings for accommodations, restaurants and beaches. In the center of the island, a low mountain rises to about 1,350 feet and the area is sparsely inhabited. 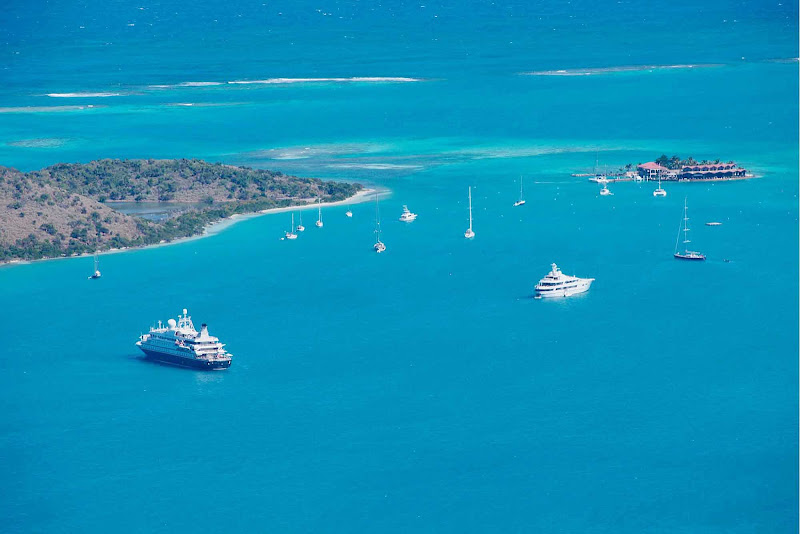 Courtesy of SeaDream Yacht ClubA SeaDream ship sails off the coast of Virgin Gorda in the British Virgin Islands.

Top things to do & see in Virgin Gorda

Though long a haven for the yachting crowd, Virgin Gorda remains under-commercialized and largely pristine. It's reminiscent of the USVI's St. John, before the designer shoe and handbag stores arrived. With only a few resorts and a sprinkling of villas, Virgin Gorda has a pleasing intimacy. The local people are well educated, friendly and family oriented. As elsewhere in the BVI, English is spoken with a more or less strong accent. It is courteous to begin a conversation — even a brief question — with "Good Morning," or other salutation appropriate to the time of day.

Spanish Town on southern Virgin Gorda is the second largest town of the British Virgin Islands (after Road Town, Tortola). Spanish Town offers shopping possibilities and a few bars, and at its heart is Yacht Harbor marina, where many bareboat-sailing activities are available. It has its own airport and a ferry service runs between Spanish Town and Road Town. Overall, though, this is not the place to find lots of stores, bars and glitz. Instead, Spanish Town offers a low-key respite for visitors who want a taste of local Caribbean hospitality and life--surrounded by glorious beaches and water. 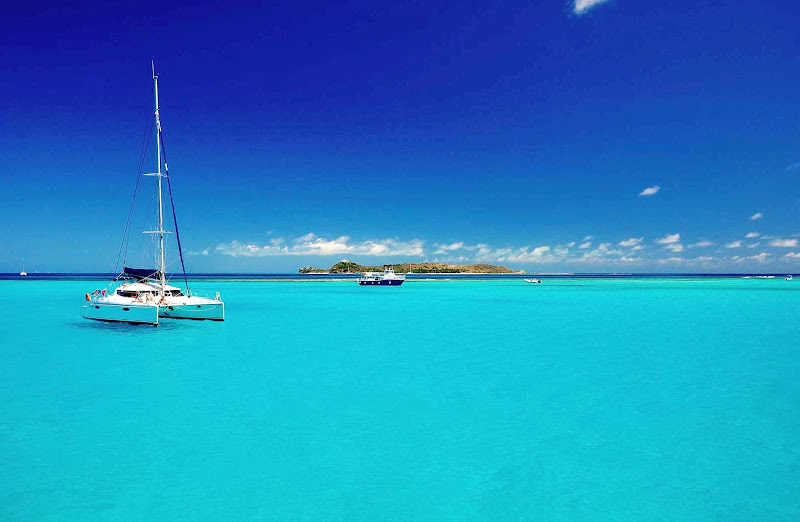 kansasphoto / Creative Commons BYNecker Island in a sea of turquoise, near Virgin Gorda in the British Virgin Islands.

Changing rooms, lockers and refreshments are available on the beach at The Baths, the island's most popular attraction and well worth a visit to experience the dramatic setting  of massive boulders, some 40 feet in diameter, quiet pools and idyllic sea . A series of steps and rope handrails guide adventurous explorers along a trail through the boulders from the beach at The Baths to the sandy expanse that is Devil's Bay, another national park and home to one of Virgin Gorda's loveliest beaches.

Both beaches may be reached by paths down from the parking lot at the south end of Tower Road. Some cruise ships anchor not far off shore and tender passengers to The Baths.

Not far from these more popular attractions is Savannah Bay beach, north of Spanish Town and reached by a short dirt road. This long sweep of perfect white sand, and adjacent Pond Bay, may have a few people or none at all. There's excellent snorkeling — for able swimmers only — along the outer edge of the reef.

Larger cruise ships will dock on Tortola, with Virgin Gorda only a short ferry ride away. Or, ships may anchor in a bay, then tender passengers to shore near The Baths.

Virgin Gorda is not a large island and taxis are available, with set rates from wherever you land and major tourist spots.  If you are docking in Tortola, the ferry ride is $30 roundtrip.

Tipping: Check to see if a service charge was included in your bill; if not, a tip of 10-15% is appreciated. Your taxi driver will also appreciate a tip.

Safety: Exercise normal caution while on Virgin Gorda and leave your valuables on the ship so you can have a carefree day.

Wikitravel contributed to this review.

Have you been to Virgin Gorda? Please share a story, tip or discovery. What was the highlight?

“In her often breathtaking and powerful way, Mother Nature has sprinkled the far southwestern tip of Virgin Gorda with giant granite boulders, just like a child might pile rocks in a sandbox. Wedged together with crushing force, the boulders form a rooftop of sorts, creating grottos with splashing aquamarine pools.”