The most populous of the British Virgin Islands, and its largest island (at a svelte 21.5 square miles), Tortola is synonymous with its white-sand beaches along the Atlantic Ocean, which allow for a variety of water sports from kayaking to kiteboarding. However, there's far more to Tortola than just its surf. This island offers the ultimate in hospitality and plenty of history to explore.

The island has a stunning array of historical ruins that date back to the 1700s, when the island was a part of the slave trade as a part of the British empire. Now independent, the natives still have the propriety of the English while offering the pleasures of island life. So either take a swim, hike through Sage Mountain park or simply sip your favorite alcoholic beverage on the beach.

Cruise ships that call on Tortola 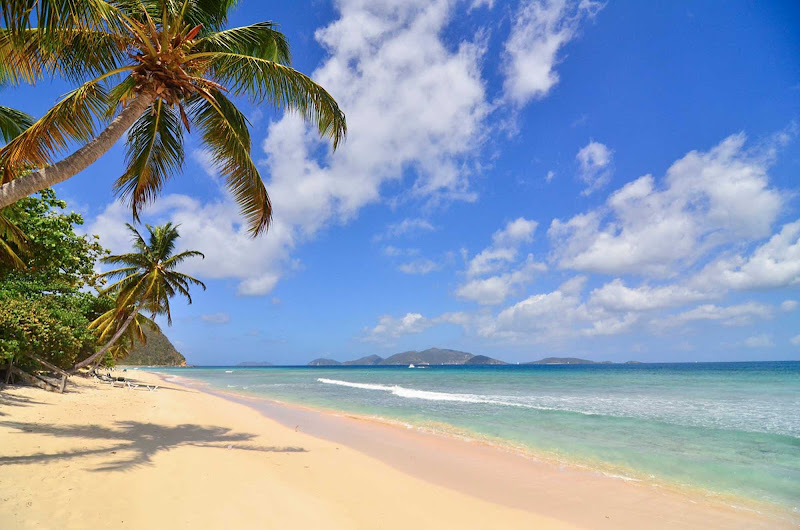 Things to see & do in Tortola

The northern coast of Tortola is beach central, with white sand beaches. Cane Garden Bay is the most popular with tourists, as it is closer to the cruise dock, and has restaurants nearby. If you would rather surf than swim, head over to either Josiah's Bay or Apple Bay. Apple Bay is particularly popular with the locals during the full moon, as there are often full moon parties here. If you want to get away from the hustle and bustle, take the trek to Smuggler's Cove, which offers beautiful views.

If you're tired of the water, head into Sage Mountain Park, which offers plenty of hiking. The park has 12 trails forming a circular route, including the Central Trail, also known as the Rainforest Trail. The trail to the top of Mount Sage, the highest point in the U.S. and British Virgin Islands, is for more experienced hikers, but there are many trails that will give you a feel for the park and the island.

Often overlooked on Tortola are the interesting historical ruins. These include The Dungeon (originally named Dojon, a Spanish fort dating from the 1700s) and the African Church, which was officially St Phillips. It was a church used by African slaves freed by the Royal Navy that were then left on Tortola.

You can also head to Road Town if you would like to take in the scenery. There you can find the oldest building in town, HM Prison, which dates from the 1840s. There are a mixture of older and newer buildings on Main Street, along with shops and restaurants.

Due to the tourism to the island, there are all kinds of foods available depending on what you like. The freshest food is, of course, the fish, but there are plenty of other options available. Brandywine Estate Restaurant (284-495-2301) is legendary among tourists, with a delicious Italian menu and stunning views. The Sugar Mill restaurant (284-495-4355) in Apple Bay is known for its seafood, not to mention its location in a 400-year-old sugar mill. If you're looking for something a little more casual, head to Roti Palace (284-494-4196), which features Indian flatbreads and a variety of curries.

But no matter where you go to eat, feel free to indulge in a drink. Alcohol is a lifestyle on Tortola, with relaxed laws regarding drinking and numerous bars and alcohol vendors alongside the restaurants. Whether you prefer a beer or an island cocktail, drinks are inexpensive. If you prefer hard liquor, stick with rum, the island's specialty.

Although the weather in Tortola is beautiful year-round, the water is usually warmest from September to November, but the dry season for the island is usually from January to July.

Cruise ships dock in Road Harbour. From here you can walk to Road Town, the main town in Tortola.

Minivans and safari cabs are typically available at the harbor and the ferry dock in Road Town, Soper’s Hole and near Wickham’s Cay. Prices should be negotiated before getting in.

New Horizon Ferry Service has regular scheduled trips between Road Town, Tortola and Great Harbour, Jost Van Dyke. The ride lasts about 50 minutes, depending on the weather. Check the ferry schedule for your travel date as they may vary.

Passport: U.S. and Canadian citizens will need a valid passport.

Currency: The U.S. dollar (!) is the official currency of this British territory.

Safety:  Tortola is considered a pretty safe island. As always, keep your valuables locked up and be aware of your surroundings.

Have you been to Tortola? Please share a story, tip or discovery. What was the highlight for you? Please share in the comments below.

“On Tortola, I hopped aboard a chartered catamaran to mountainous Jost Van Dyke, home to the BVI's party-central Foxy's Tamarind Bar.”

“Tortola doesn't have many historic sights, but it does have lots of beautiful natural scenery. Although you could explore the island's 10 square mi (26 square km) in a few hours, opting for such a whirlwind tour would be a mistake. ... Try Road Town (the island's tiny metropolis). Drive to Cane Garden Bay and the little town of West End. The North Shore is where all the best beaches are found.”