San Juan port guide: What to do & see

San Juan and Puerto Rico were severely damaged by Hurricane Maria in September 2017. Power on the island may be out for as long as six months. Be sure to check into the current state of services if you're planning to visit the island in the near term.

San Juan, Puerto Rico's capital city, offer plenty of insight into the island's rich history. Old San Juan has buildings still standing from the days of the early Spanish explorers. They stand alongside enormous resorts and some of the best beaches in the world.

Top activities include a tour of the 400-year-old historic fort El Morro, an afternoon on one of the island's famed beaches or a 25-mile jaunt to El Yunque rainforest.

Puerto Rico is a territory of the United States, so American citizens are free to enter and exit the island as they please. This also means they have complete access to duty-free shopping, so feel free to hunt for all the good values found in San Juan's many shops.

Top things to do & see in San Juan

Only twenty-five miles outside of San Juan, El Yunque is the only U.S. National Forest that is actually a rainforest. There are over 200 species of trees here, and only a handful of can be found on the mainland United States, so feel free to explore at your leisure.

The San Juan National Historic Site features three forts: San Cristóbal, San Felipe del Morro and San Juan de la Cruz, also called El Cañuelo. In addition, there are bastions, powder houses and the majority of the city wall, which were all defensive fortifications surrounding the old, colonial portion of San Juan. Together, they are among the oldest and best-preserved Spanish fortifications in the Western Hemisphere.

Located in the Cuartel de Ballajá (787-724-5052), this museum offers a diverse history lesson on the island of Puerto Rico. The items on display range from old New England artifacts to Caribbean Indian crafts from the island of Dominica. There are also wide selections of paintings, some of which are for sale. 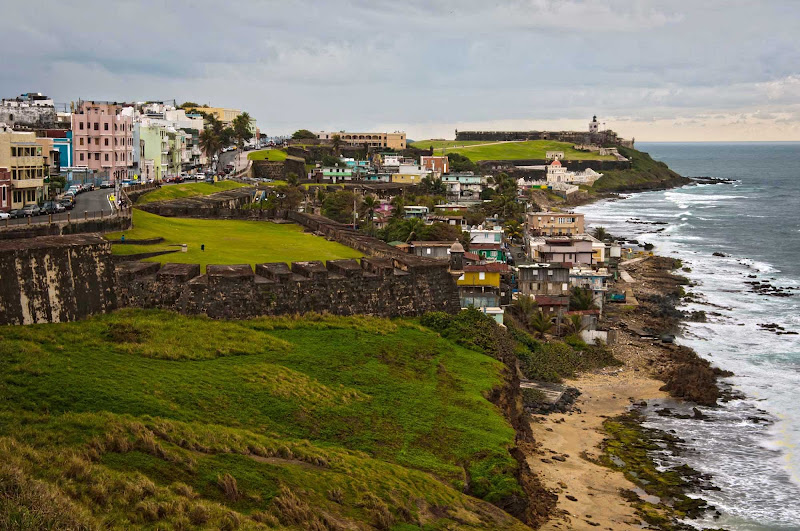 vxla / Creative Commons BYWest of San Cristóbal along the coastline is the neighborhood of La Perla in Old San Juan, Puerto Rico. It's part of the area's UNESCO World Heritage Site.

Puerto Rico has 300 miles of coastline, so you should have no problem in finding a beach. However, some locations stand out above the rest. On San Juan's north shore sits Ocean Park. Accessible easily by bus, Ocean Park is very popular among the locals as well as tourists. Neighboring it is Park Barbosa, another easy-to-find beach that is always crowded. You'll be able to find scuba diving, snorkeling and wind surfing opportunities at most of these places. However, be aware that public beaches are closed on Mondays.

Duty-free shopping for Americans in Puerto Rico means that there are great values to be found in San Juan. Lindissima Shop, at 300 Calle Fortaleza (787-758-6511), offers elegant woman's wear. If you're a little low on comfortable beachwear, a quick visit to W.H. Smith, located at the Condado Plaza Hotel (787-721-1000, ext. 2094), should help men and women. For souvenir shoppers, look into Puerto Rican Arts & Crafts, located in Old San Juan at Calle Fortaleza 200 (787-725-5596). Carnival masks are particularly popular here.

Amadeus, at San Sebastián 106 (787-722-8635), offers Caribbean food with healthy array of seafood and tasty beef and chicken dishes. Reservations are recommended. Chef Marisoll, at Calle Cristo 202 (787-725-7454) in Old San Juan, offers mouth-watering dishes such as risotto made with delectable lobster, scallops, and shrimp in a saffron sauce, but reservations are required. Ramiro's, located at Avda. Magdalena 1106 (787-721-9049), features a fixed five-course meal will tickle all of your taste buds, but during the winter, reservations are required.

The weather in San Juan is pleasant year-round, but hurricane season occurs between June and November, so the winter months in Puerto Rico are usually the best times to visit. 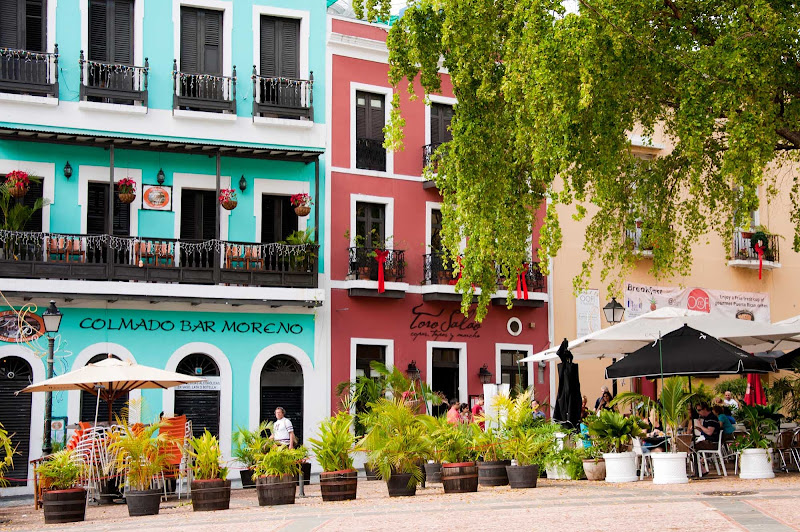 Cruise ships dock at the Puerto Rico Ports Authority in San Juan. From the port, there is road access to the entire island.

Taxis are available throughout San Juan, and the Public Service Commission (787-756-1401) runs the taxi service. All taxis should be metered, so remain alert and check to see if your driver is using the meter so that you are not overcharged. Open-air trolleys are a wonderful and free way to travel around San Juan. Buses also travel throughout the area, making frequent stops throughout the city and costing only $0.50. If you want to visit Hato Rey or Catano from San Juan, ferries run every half hour. Call Agua Expreso (787-788-1155) for information.

Passport: Since it is a U.S. territory, U.S. citizens will not need a passport. However, Canadian citizens will.

Language: Spanish and English are both spoken here.

Store hours: Most stores are open Monday to Saturday, 9 am to 9 pm and closed on Sunday. Count on convenience stores staying open late into the night, seven days a week.

Tipping: A 15% gratuity is customary in most service and restaurant locations.

Safety: While the city of San Juan carries the same risks as any big city, Old San Juan is quite safe. As in any other city, it is not advisable to go out alone late at night. Also beware of crowded spaces, as pickpockets can be attracted to them.

Have you been to San Juan? What was a highlight for you? Please share!

“Check the moon calendar at viequesadventures.com. As long as the moon isn't at its brightest, book a clear kayak tour of the bioluminescent bay with Vieques Adventure Company. The water will literally glow beneath you.”

“Hiking through the cool, sweet air in Puerto Rico's best-known rainforest couldn't be easier. Trails like El Yunque (about four hours), La Mina (my pick for the natural swimming pools) and Big Tree are paved, and the cloud layers provide a buffer from the sun.”