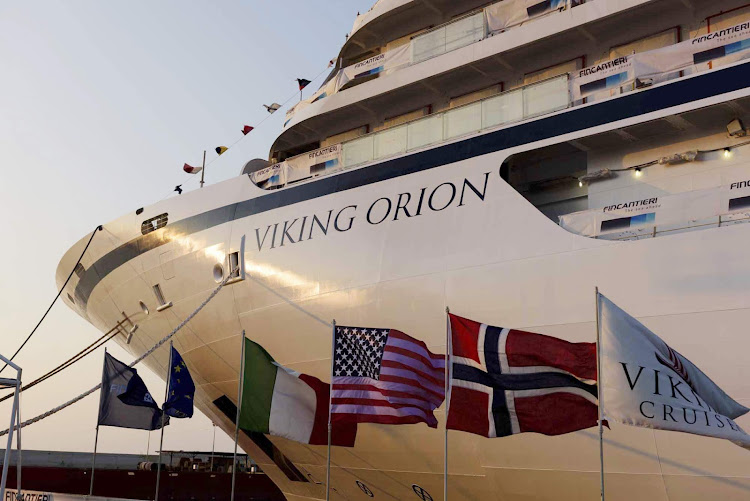 Viking Orion during its floatout. The ship debuts in June 2018.

Viking Cruises is one of a very few cruise lines that I  have yet to sail with. But it’s on  my list.  I missed the last four ships and now they've introduced a fifth, which was just named Viking Orion at a gala celebration in Livorno, Italy.

She is now on her maiden voyage, accompanied by  her ceremonial godmother, American chemist, emergency room physician and retired NASA astronaut Dr. Anna Fisher, and dozens of Dr. Fisher’s friends, family, academics, explorers and fellow astronauts. Named after the prominent constellation and in honor of Dr. Fisher’s work on NASA’s Orion exploration vehicle project, the 930-guest 47,800-ton Viking Orion arrived in Livorno early this morning. The ship will continue her maiden season sailing itineraries in the Western and Eastern Mediterranean this summer before heading east to sail Viking’s newest itineraries in Asia, Australia and Alaska.

“Today is a proud day for the entire Viking family. Just three years ago we launched our first ocean ship, and now we are welcoming our fifth ship, whose name was selected to honor both the original Viking explorers who used the constellations for long-distance navigation, as well as the great space explorers of our time,” Viking chairman Torstein Hagen said in a statement. “The spirit of exploration is at the heart of the Viking way of travel, and we look forward to welcoming guests onboard our newest ship, which has been designed to offer opportunities for learning about the great history of space exploration.”

The Explorers’ Dome, located in the upper level of the Explorers’ Lounge on deck 8, is a planetarium-like theater where guests can view special panoramic films about exploration, such as “Journey to Space” and “Life Under the Arctic Sky” in a fully immersive environment.

Explorations in Space Collection is an homage to mankind’s exploration beyond the confines of planet Earth. The onboard collection is conceived as a photographic journal through space with a broad range of classic photos, including astronaut portraits and documents of complex mission activities, produced by NASA and captured by National Geographic photographers and the Apollo and Gemini astronauts themselves.

Not your usual sybaritic passenger

Different from the rest Viking’s ship cater to travelers with interests in history, art, music and cuisine.  Hagen says Viking offers guests “the thinking person’s cruise” as an alternative to mainstream cruises. Because of the small size, the ships can pull into ports where other vessels  have to anchor and use launches.  Ships are Scandinavian accented and offer delightful outdoor dining venues and highly rated food.

The price of a Viking cruise includes a veranda stateroom, a complimentary shore excursion in each port of call, lunch and dinner with free wine and beer, and all port charges and government taxes.

Interested in a cruise on Viking Orion? Itineraries are filling up, so contact a Cruiseable travel advocate for more information by email or by calling 1-877-322-3773 toll free. There's no obligation and Cruiseable's experts work for you, not the cruise line.