Are maritime carriers hijacking your smartphone when you're on a cruise ship?

Over the years I've heard plenty of horror stories about travelers returning from cruises only to be hit by a jaw-dropping — and unexpectedly ginormous — cellular phone bill.

It's why I make every attempt to NEVER turn on cellular service on while aboard a cruise ship.

In March I spent a week aboard Windstar Cruises' Wind Surf on an otherwise splendid sailing in the Caribbean. During the trip I received a single text from AT&T informing me that I was nearing my data capacity for the month and, if it was exceeded, there would be a $20 fee for additional data usage. (I had purchased the ship's Passport Plan, which covers Wi-Fi but not cellular.) I had used my iPhone 7 on land during the trip and probably forgot to toggle the setting back to Airplane Mode when reboarding the ship a couple of times. In any case, I didn't intentionally use my iPhone on board Wind Surf for even a moment. That is, I uploaded no photos or video, texted no one, called no one.

So imagine my surprise when my AT&T bill arrived with an overage charge of $1,825!

After more than a month of escalating the issue right up to the office of AT&T's president, we agreed I'd cover about $200 of these fees and AT&T would waive the balance.

Cellular at Sea: Why didn't you ask me?

So I'm now especially leery of the ways the carriers are attempting to bilk cruise consumers. 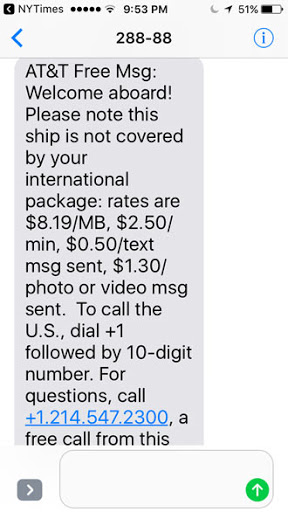 Every day, upon returning from land, I made certain that my smartphone's Cellular setting was off and Airplane Mode was on.

During the voyage there were occasions when I had to switch Airplane Mode off so that I could post photos to Instagram. Again, I had a 1,000-minute Internet plan from the cruise line. I chose "WiFi > Oosterdam Guest" in the Wi-Fi settings and merrily posted away on Wednesday night.

But then a funny thing happened. I received a text (see screenshot above right) stating:

I immediately went to the Settings and was surprised to see that a new setting had appeared:

This phantom "Carrier" setting appeared below the regular "Cellular" setting. So even though I had specifically chosen "Wi-Fi Oosterdam-Guest," and even though my Cellular and Data Roaming settings were set to Off, the phone had automatically jumped over to this surprise "Carrier" setting, which had turned on without my OK.

Two days later, it happened again. (And, no, the answer is not to tell me don't use social media during a cruise. It's an integral part of the experience.) Doubly problematic, the screen doesn't show you that your "Carrier" setting is on or active.

Cellular at Sea is a joint venture between Wireless Maritime Services (WMS) and AT&T that turns on when a ship is more than 12 miles from land. WMS tells its cruise line partners on its website that "WMS is uniquely positioned to ... create diverse revenue streams on this platform."

Now, perhaps Apple, Wireless Maritime Services and AT&T have set up a default so that a smartphone will "jump" to the signal that's the strongest one available at sea, regardless of the user's choice.

The problem is that 99.9% of us would prefer a weaker Wi-Fi signal, covered under our paid plan, than the exorbitant rates charged by Cellular at Sea.

I'll say it again: The phone automatically jumps over to this new carrier without our opt-in or knowledge. And that;s just wrong.

We'll see how my bill turns out next month. Just be aware, you could be next.