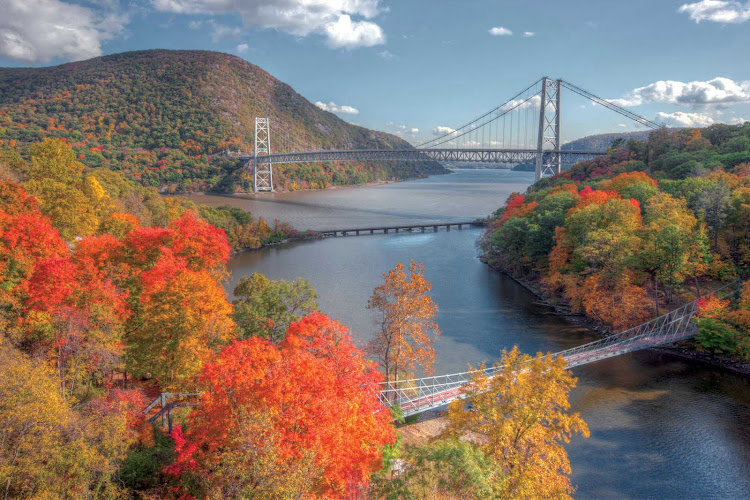 See Bear Mountain Bridge and colorful fall foliage on a cruise up the Hudson River on an American River Cruises sailing.

This is the second of a two-part series on Fall Foliage cruises. Also see:

As a native New Englander, I'll admit that we locals can be a bit blasé about the changing of the seasons. But for out-of-towners, there's no question that autumn is one of the best times of the year to visit the Northeast and take in the colorful foliage and cool, crisp air.

If you've been thinking about a vacation where you can experience the full majesty of the fall — whether it's Boston, the Maine coast or further afield — you should think about taking a fall foliage cruise. At the top of the list is American Cruise Lines, whose fleet of eight ships offer enticing fall foliage getaways in the Pacific Northwest, Northeast, Southeast and Midwest during late September and most of October.

What to expect on American Cruise Lines

Their modern fleet of paddlewheel riverboats and small coastal cruise ships all offer outside rooms that feature either a private balcony (veranda) or a large picture window, giving you nice sweeping views of the passing landscapes throughout your voyage. With typical cabin sizes around 300 square feet, including full-size bathrooms, you won't feel pinched for space.

One advantage of an American Cruise Lines voyage is that the ships are small and hold only around 100 passengers. The ships range in size from the petite sailing ship American Glory, with 48 guests, to the Queen of the Mississippi and American Pride, with 150 guests. (Fun fact: Most river cruise ships in Europe are the same dimensions so they can slip through the unforgiving locks on the Danube, Rhine and other rivers with only a few inches to spare on each side. Not so river cruise ships in the U.S. where the major rivers don't have locks.)

With limited space does come limited onboard amenities: There's no casino, no big stage production shows, no spa, fitness center or swimming pool. But what you get is generally first rate.

The cruise line's menus change daily and feature locally sourced ingredients, reflecting the regions of the country where you are sailing for a more authentic experience. Complimentary wine and beer are served at lunch and dinner, and there is a pre-dinner reception where guests can mingle each evening. Lectures by local experts are provided most days, focusing on the region's history and highlights of upcoming ports. At each port, a handful of shore excursions are available through the cruise line, or you could book a private tour to make the most of your time on shore.

If you're considering taking in the sights and smells of autumn on a river cruise in the U.S., here are some top options on where to go to catch glimpses of fall foliage. 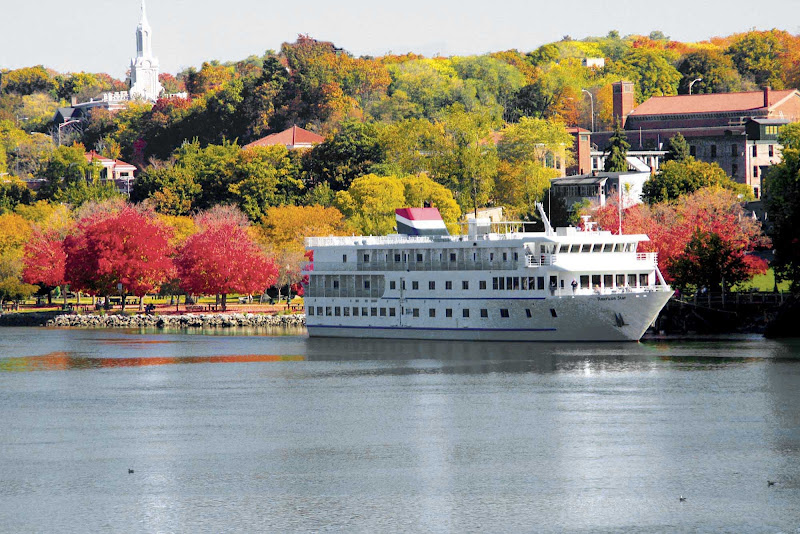 Courtesy of American Cruise LinesThe diminutive American Star docks at a town on the Hudson River featuring colonial architecture as the leaves begin to turn.

Northeast: Sail through the tranquil Catskills

There may be no place better to watch the seasons change than the Catskill Mountains region of New York state. Traveling on either the Independence or American Star, you'll leave on a seven-night cruise that takes you from the hustle and bustle of New York City to the solitude of middle and upper New York state. Along the way, not only can you admire the rich colors, but you'll also make stops in ports including West Point, home to the United States Military Academy, and the state capital of Albany. A stop in Sleepy Hollow (site of the classic short story by Washington Irving) as well as Catskill will allow you to tour quaint small towns or venture off to see the fall foliage in nearby parks and forests.

Other Northeast options include a Maine Coast Cruise from May to September; a Grand New England Cruise in June, and seven-day Lobster Cruises from Providence to Martha's Vineyard and other ports in May and June (sorry, no fall sailings). 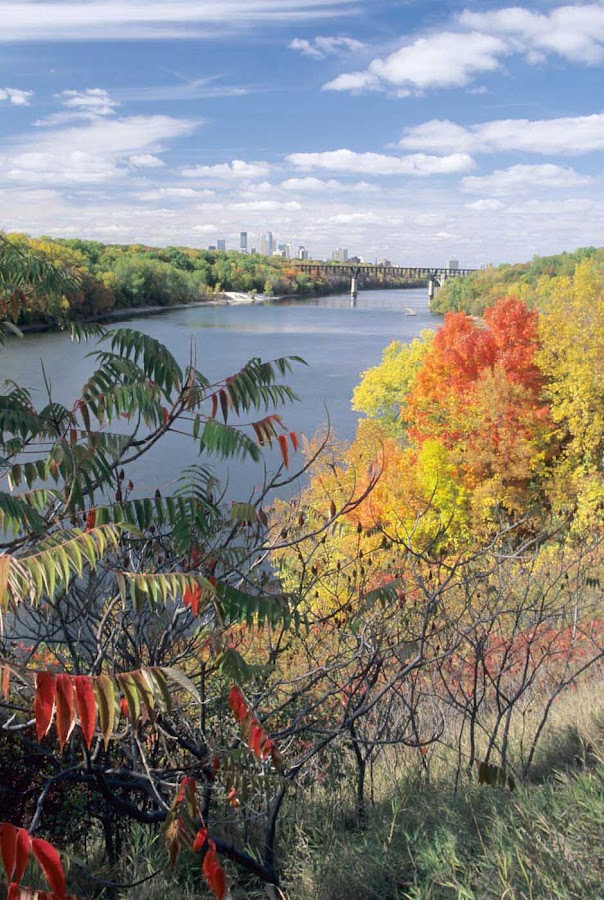 Ships: Queen of the Mississippi, America

If you're looking for a classic U.S. river cruise experience, the Fall Foliage cruises down the Mississippi River on Queen of Mississippi or America in early October might be perfect for you. This quintessential American experience will bring you through parts of the heartland as you cruise through Missouri, Iowa, Wisconsin, and Minnesota on a seven night trek. Along with witnessing colorful changes in the leaves, you can also experience some of the heartlands most iconic landmarks. From the St Louis Arch and Riverwalk to historic homes and avenues of Dubuque, Iowa and St. Paul, MN, your fall foliage cruise down the Mississippi River will be rich with Victorian era charm as well as natural beauty. 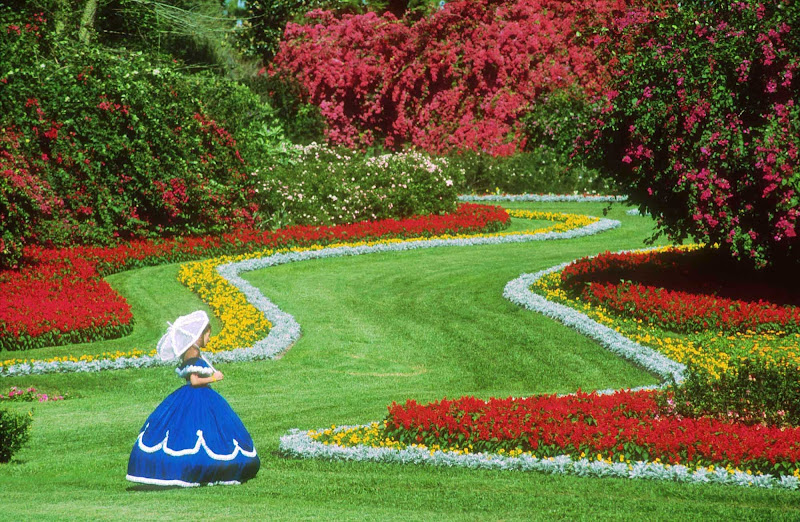 Courtesy of American Cruise LinesGuests sailing to Louisiana aboard the Queen of the Mississippi will get a chance to visit the antebellum estate Houmas House.

Ships: Queen of the Mississippi, America

American River Cruises features a slew of Civil War cruises out of New Orleans and Memphis, Tenn., on the Queen of the Mississippi and its newest ship, America, from now through December. Cruise into the heart of Dixie on a grand paddlewheeler on an eight-day voyage while enjoying authentic Cajun cuisine, views of the Mississippi Delta and shore excursions to historic venues such as Vicksburg, Miss., site of one of the most significant battles of the Civil War. Meet Southern Belles in period dress before touring historic Oak Alley planation and see attractions such as the interactive Louisiana State Museum in Baton Rouge, La. 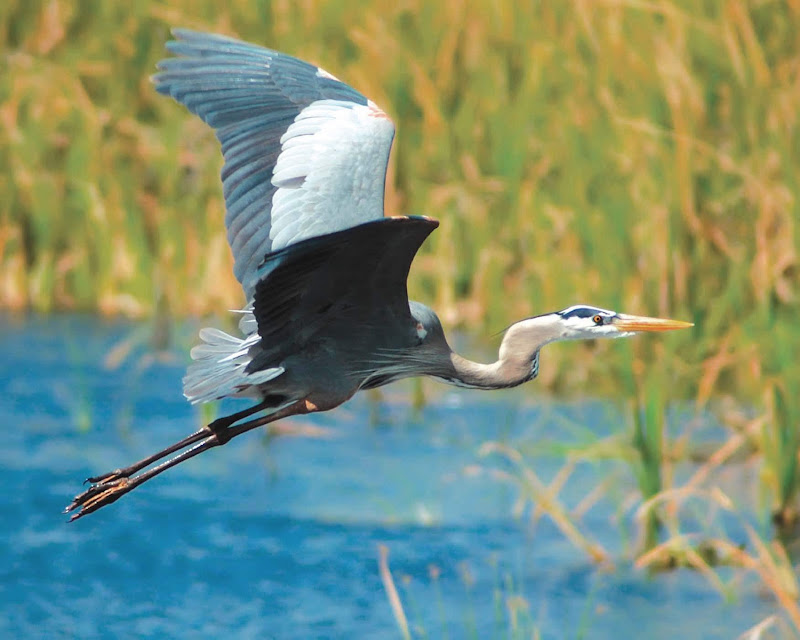 Cruises on American Star, Independence and American Glory this fall include "Historic South and Golden Isles Cruise" as well as cruises to Florida, Chesapeake Bay and small towns along the Eastern Seaboard. The Historic South cruise treks down a protected network of bays, rivers and canals that are home to iconic, storied cities such as Savannah, Charleston, Jekyll Island and Beaufort, S.C. In between ports you'll pass through expansive wildlife refuges and remote wilderness areas. These are sailings that nature and history lovers should enjoy. 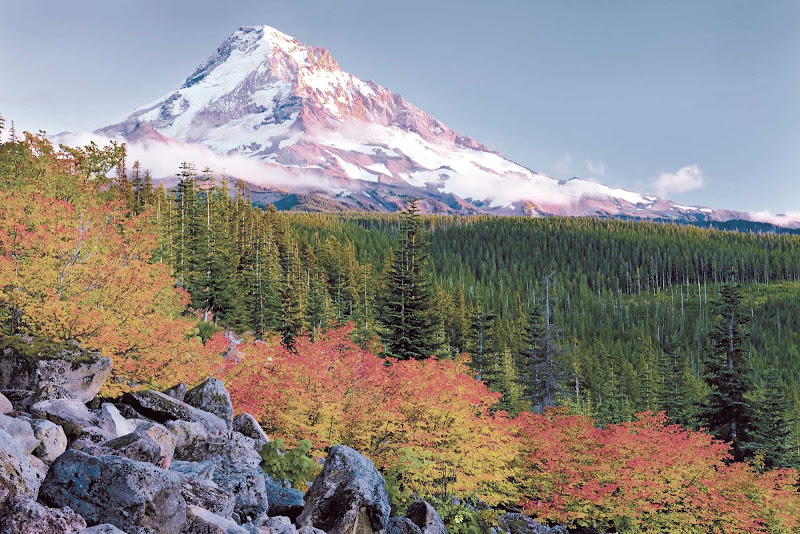 For those looking for a little more adventure, you can head out west to Seattle to enjoy the changing of seasons in the Pacific Northwest with a Puget Sound and San Juan Islands Fall Foliage cruise. With the Olympic Mountains as your backdrop, you might also catch a glimpse of some wildlife, including whales and bald eagles. Be sure to have your camera ready to capture these moments, including one of the most photographed areas of the Northwest, Deception Point. Stopping in Victoria, British Columbia, you will want to visit Butchart Gardens with its vibrant color displays and explore the Inner Harbor to see the historic Fairmont Empress Hotel and the British Parliament buildings, which take on a special beauty when lit up at night.

You'll also catch some fall foliage on cruises out of Seattle to Alaska's Inside Passage on American Spirit, though those voyages are more about seeing wildlife than catching fall colors in the evergreen-heavy Northwest.

Itineraries for 2016 and 2017 are available and filling up, so now is the best time to start planning your fall foliage river cruise. I'm looking forward to trying out one of these ships myself to garner a new perspective.

Interested in a cruise during the height of fall foliage in 2016 or 2017? Contact a Cruiseable travel advocate and we'll make sure you get the lowest price, the best value and all the perks. Call our business department at 1-877-322-3773 to speak to an expert travel professional, or send a query.