Halifax & Nova Scotia: The wild side of Atlantic Canada

Halifax, the largest city in maritime Canada, is known abroad for its beautiful North Atlantic coastline, preserved architectural monuments and, occasionally, tropical storms. Of course, the idea of anything “tropical” in Halifax is a little ridiculous (it being far closer to the arctic than the torrid zone), and the threat of serious weather has not stopped Nova Scotia’s capital city from growing into maritime Canada’s largest city and, arguably, its cultural center.

Halifax is one of the world’s largest natural harbors. Located in the central east coast of Canada’s province Nova Scotia, it was founded in 1749 as a British settlement and military base.

Go to Nova Scotia if you want to hear spoken Gaelic. The small maritime province cherishes and tries to preserve all the cultures that have influenced its history. Mi’ kmaq aboriginal cultures, the cultures of escaped slaves and the transplant Scottish Highland culture have all influenced the distinctive art and music of Nova Scotia, the current incarnations of which wait to be discovered along sandy, rocky and foggy beaches.

Cruise lines that call on Halifax

Here are some of the cruise lines with ships that regularly call on Halifax.

Here's a 1-minute, 50-second video from Princess Cruises about travel to Atlantic Canada (including Nova Scotia) and New England.

Top things to do & see in Halifax

Halifax offers a wide range of activities. You can visit museums, art galleries, live theater, the symphony, enjoy sandy beaches or experience a vibrant nightlife. Halifax is both a city full of Canadian history and also a place for modern living, neatly allocated to the shore. When visiting Halifax, don’t miss the opportunity to eat delicious seafood on a sunny patio along the waterfront, where you can feel the ocean’s breeze. Taking the scenic drive to Peggy’s Cove, you can enjoy the legendary lighthouse view.

Arts are strongly represented in Halifax, with highlights including the Neptune Theatre (the province’s largest), the Art Gallery of Nova Scotia and NovaScotian Crystal on the Halifax waterfront (where the mouth-blown and hand-cut crystal are the only Canadian-made products of their kind). Take a stroll along the streets near Halifax harbor or through downtown Halifax, and you will find many more art galleries and artisan studios or storefronts.

If you are interested in the works of local artists, visit the Art Gallery of Nova Scotia. There you find even Inuit art. To see a whale skeleton and life-size models of early Canadian dinosaurs, go to the Nova Scotia Museum of Natural History. Pier 21, the landing place for millions of Canadian immigrants for over 40 years, stands today as the Canadian Museum of Immigration.

Not necessarily a relaxing destination, travelers after adventure will find kayaking, rafting and surfing just a few of the many athletic pleasures the Nova Scotia coast offers. Inland Nova Scotia is a fine place to play golf and hike. From cliffs along the coast, visitors can see light houses challenge time in the Atlantic surf, watch sailboats float elegantly by and maybe get lucky enough to see a whale break the water.

In a province fully aware of, and appreciative of, its history, there are two historic festivals worth checking out. The Lunenberg Folk Harbour Festival has been celebrating the music of the province’s founding peoples for over 25 years in Lunenberg, just south of the provincial capital of Halifax. The Celtic Colours International Festival held at Cape Breton, near Nova Scotia’s eastern tip, highlights fiddle playing, Gaelic dancing and the language of the old country.

Equally popular festivals include the Royal Nova Scotia International Tattoo, which brings together the world’s best in military and civilian bagpipes and drums, and The Halifax International Busker Festival. What is a Busker Fest? Maybe it’s too crude to call it an all-human circus, but the acts do include contortionists, comedians, magicians and fire acrobats from around the world.

Halifax has, in addition to some well-preserved Victorian architecture, a wealth of preserved, historic war structures and wooden buildings — the latter decorated with ornate storm porches built to fend off the occasional “tropical storms.” The Citadel National Historic Site, with its distinct, elongated star shape, sits just off the harbor in the middle of town. In Point Pleasant Park, just north of downtown, over 24 miles of nature trails weave around amidst ruins of colonial forts, and other historical landmarks can be found on quick trips out of Halifax.

Travelers looking for excursions should check out the coast and land surrounding the city. The beaches are beautiful, with rocks and lighthouses and the occasional sandy beach tucked into the crags. Inlets and lakes in the area can be great for fishing and canoeing as well. Because Halifax is the population center of the Canadian North Atlantic, trips into the surrounding areas may see a lot of traffic. “A lot,” however, is relative. A getaway in the Halifax area is not difficult to find. 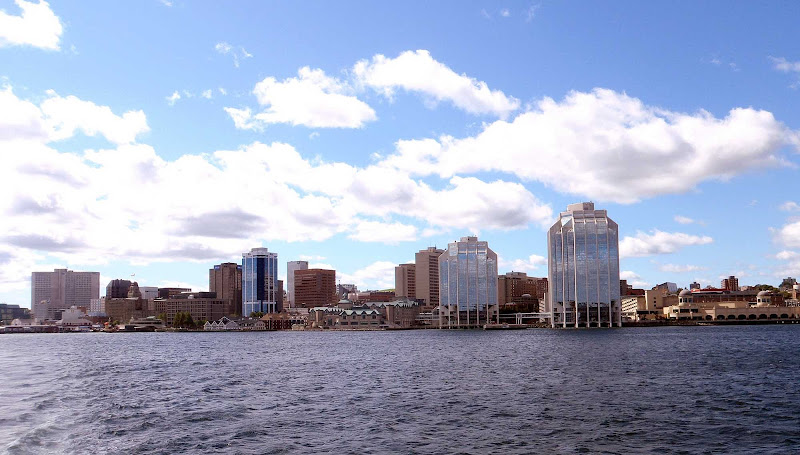 Skilled artisans practice and perfect traditional crafts around the province and the seafood is fresh all over. So, shopping and dining throughout Nova Scotia is a treat. Fredie's Fantastic Fishhouse, for example, is a small diner with some of the best fish and chips in town. For something a bit more upscale, check out The Press Gang Restaurant & Oyster Bar. Add wine from the local vineyards and Nova Scotia might just seem to be a self-sustaining wonder.

Halifax is also the region’s go-to spot for nightlife. Entertaining live music can be heard in the city. There are also plenty of delicious restaurants (do not pass up the seafood), and there are enough bars and nightclubs to satisfy partiers and night owls. Plus, there’s the Halifax Seaport Beerfest in August. Still gaining in popularity, this nascent hoppy celebration sells out.

The weather in Halifax is generally cooler than inland Canada, but the extremes are not as bad. Temperatures drop below freezing in the winter, and snow is to be expected, but temperatures hardly get above 70° Fahrenheit throughout the summer, making the season very temperate.

In Halifax, ships dock at the Seaport in easy walking distance of downtown. The cruise terminal, Pavilion 22, is a modern facility with hydraulic gangways and a small mall with Nova Scotian handcrafts and signature products available.

Halifax has taxis available everywhere. It’s easy to find one and they are metered and safe. For cruise passengers, departing from Halifax, the city is accessible by car from mainland Canada, and VIA Rail trains run to and from Montreal six days a week. Halifax Stanfield International Airport is not a large airport but direct flights from Eastern Canada and the Eastern United States can be found year-round. Seasonal flights to and from tropical destinations fly seasonally.

The Pavilion 21 terminal has free wi-fi. Besides this, you’ll find free Wi-Fi in many places including all the usual options such as Starbucks or fast food restaurants.

Documents: As of 2009, all United States citizens visiting Canada must possess a valid passport or NEXUS card.

Tipping:  A 10% to 15% tip on the restaurant/taxi bill is greatly appreciated. Sometimes a tip is automatically added to your bill; check your credit card slip before adding additional tip.

Safety:  Halifax is a safe city — safer than most U.S. cities. As always, be cautious and aware of your surroundings.

Have you been to Halifax or other parts of Nova Scotia? What was the highlight? Have any tips or photos? Care to share?