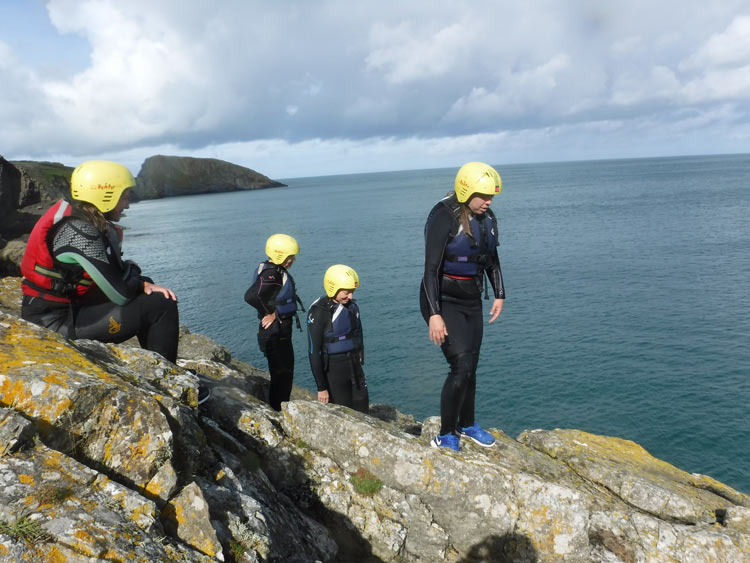 Here's our group coasteering along the coast of Wales. It's a sport in which travelers explore a rocky coastline by climbing, jumping and swimming.

Discover majestic coastlines & hidden coves, if you can brave the chill

There are two obstacles that diminish my sense of adventure. One is nausea from motion sickness (an irony for a travel writer who enjoys a life at sea), the other? Being cold. Especially, wet and cold.

That said, it isn't hard to imagine the pre-aquatic paralysis I experienced prior to my first foray in the Welsh sport known as coasteering.

Like many, I'd never heard of coasteering. The exhilarating outdoor activity is a full-body workout, involving some scrappy scaling, climbing, shimmying, jumping and swimming along rocky coastlines. (Wikipedia, in fact, has an entry about it.) 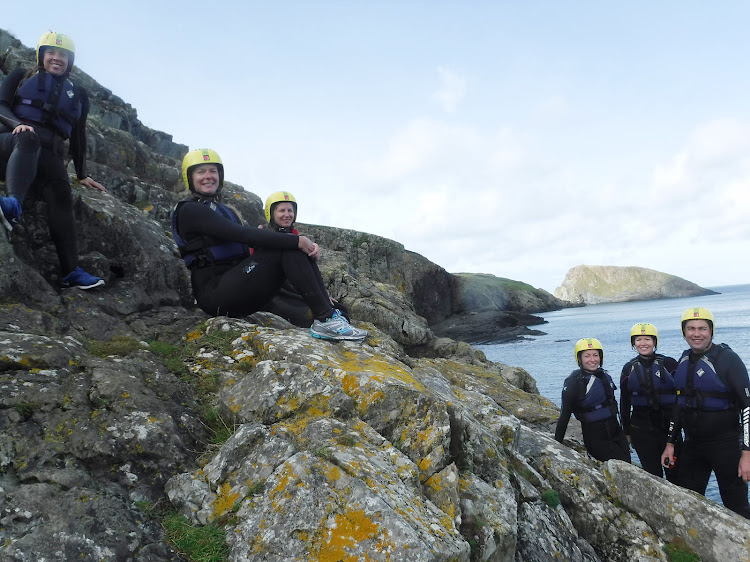 Shira Levine / Special to CruiseableOur merry band of coasteering adventurers. That's me in the upper left. (Click to enlarge.)

Cruisers with a morning and early afternoon to spare can book a one-day jaunt with fellow intrepid land- and sea-loving explorers to scramble, rock-climb, and ultimately cliff-jump in and out of the water. The goal is to access ancient tucked-away coves— otherwise unreachable from the headlands. The sport of coasteering originated in the late 1990s in the Pembrokeshire region of Wales. While a mere two hours from Cardiff, it is a world away visually. The year-round pursuit requires one to have a free-spirited sense of discovery and an appreciation of majestic and otherworldly terrain — in the face of bone-chilling 60-degree waters.

In my case, it is late September in the United Kingdom's small and oft-overlooked nation of Wales. That means plunging into 60-degree waters. Yes, 60° F.  Not polar swim cold — I've never been that kind of insane to bring in a new year with an icy plunge, all in the name of starting afresh and anew — these waters are bloody, bone-chilling cold. They require a wetsuit, an open mind and a bit of grit.

So, here I am cautiously standing at the shoreline of an old fishing village in South Wales. Today is a break from a four-day biking adventure across the verdant topography that makes up the Welsh countryside. I am cycling as part of a peloton of seven, and under the guidance of Drover Cycles, a national outfit headquartered in Wales’ tiny village of Hay on Wye. (To give you an idea, the day before was a low-key ride, just an 8.5-mile stretch of the 186-mile Pembrokeshire Coast Path.) Today we were wheels-free. Instead of yoga pants and a windbreaker, I layer in wetsuit-wear and accessorize with wetsuit gloves and socks and sneakers. For safety, I'm decked out in a helmet and life jacket.

Armed with all that gear, I still feel anxious. Standing along the precipice of the windy coastline, I breathe a deep inward breath. I will not freeze to death. I will not be miserable. I will not bail on this experience. I am committed! I will conquer this challenge to try something new. Today, in the name of great adventure I will take the ice plunge. 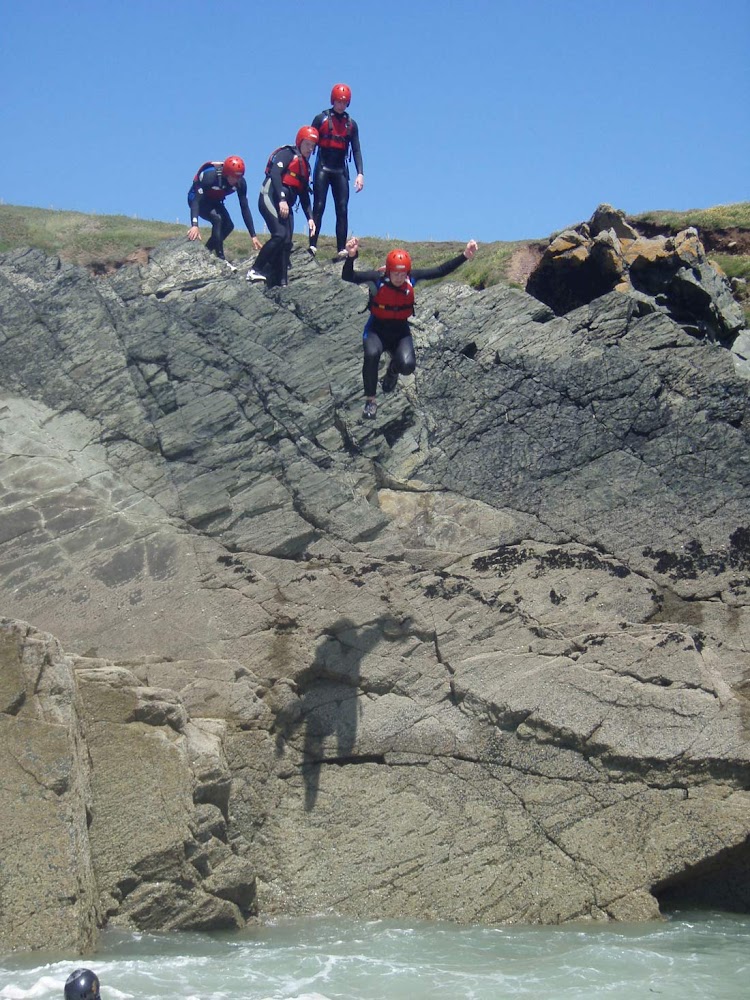 Looking to be the global capital of adventure

It helps that I'm not doing this alone. Besides my fellow cyclists, I am also under the expert guidance of Preseli Venture, a 25-year-strong regional outfit. Helmed by a husband and wife duo, who also own a 40-person ecolodge. I stayed a night, in a room across from one named “Bitches & Whelps” (named decidedly un-salaciously for a reef of rocks that stretch toward Ramsey Sound.

All of this is daring opportunity in the name of adventure. The Welsh government is in on the fun, competing with New Zealand, having declared 2016 a “Year of Adventure” in hopes of the world seeing the country most known for its Joneses (Catherine Zeta and Tom) as the global capital of adventure.

Eventually, I enter the cobalt waters through a shallow shoreline, and am surprised by the truly toasty powers of a wetsuit. That is, until I wade in deeper — just above my shoulders. It is then that I experience that first rush of cold water pouring into my suit and down my back. But then, the wetsuit magic happened — I adjust. The freshness of the water, the crispness of the air... Finally, the harsh elements no longer felt like a hurdle. I fully submerge and relish in what I imagine to be next level healing properties. I lean back to float and let the bright sun bask down on my face.

Actually, the adventure hadn't even begun. I'd literally only gotten my suit wet. 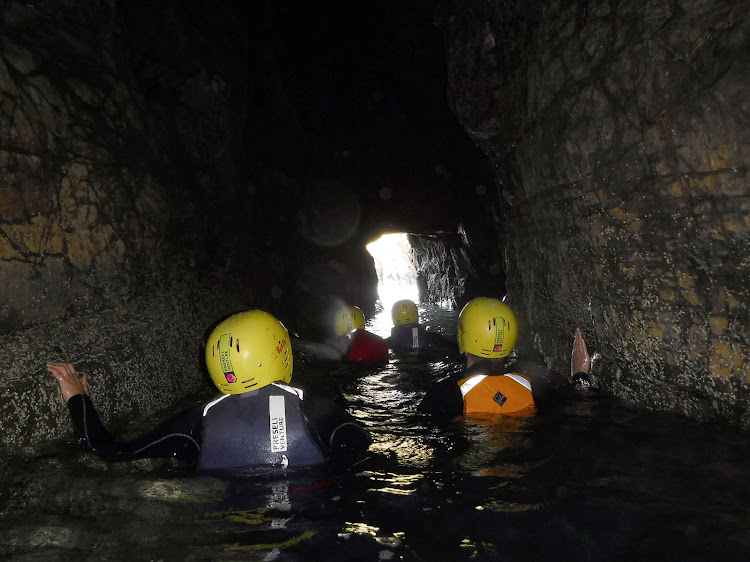 Shira Levine / Special to CruiseableExploring a sea cave was a highlight of our coasteering. (Click to enlarge.)

The Preseli guide leads my group with a brisk swim away from the shore. We pass glittery whirlpools, kicking and pulling onward to a collections of rock formations ahead. Thankful for the gloves I'm wearing, up close I notice the rocks are covered in sharp barnacles and lichen. “Grab on!” is our quick tutorial, and we are off. Primordial landscape is literally at my gloved fingertips.

I wade through a dark, mysterious sea caves splayed with cinematic sunlight. My agility extends to scaling craggy rock faces, I quickly discover. When I lose my footing, well, whoops! Falling is part of the sport, and I'm once again grateful for the miraculous science behind my wetsuit. (Later at dinner I meet the owner of Treyfloyne Manor, a 30-something multimillionaire who boasts about coasteering without gear and wetsuit. I am sufficiently impressed.)

Floating in the manageable bone-chilling water, I feel daring in a wetsuit, I splash around relishing in the proof that I will not die of hypothermia, or die from fear of hypothermia. As I swim back to grip and hoist myself back up the rocks I feel alive, bionic. I imagine my blood vessels constricting and my face and body reversing in age. Naturally, my vanity wins out and I give myself an extra dunk under water before popping out for more scrambling.

A swim around a bend reveals another sea cave. As we pass through, we learn it is often a location for mama seals to bring their pups. All of this whimsical awesomeness, however, is prologue to what leads to my eventual finale — a leap from a 40-foot parlous rock ledge and back into that crisp Welsh Atlantic Ocean. 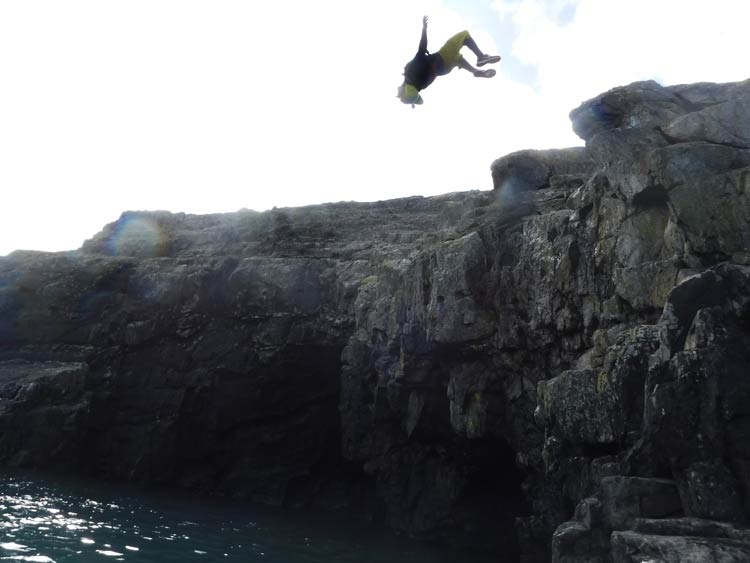 Shira Levine / Special to CruiseableTaking the plunge: Near the end of my coasteering adventure.

Exit strategy: Nowhere to go but down

I work my way up to that height with lesser jumps first to get me comfortable. Facing a leap from 40 feet above, I resign myself to fate: There is no turning back. Even still, I consider how much cooler my death will sound if it was by coasteering. If this has to be my last day on earth, today isn't the lamest way to go young. Fortunately, it isn't.

The rush of wind chill along with what feels like a butt flop despite my attempts at keeping my sausage-stuffed wetsuited arms and legs folded and crossed creates what sounds like a plate-shifting sonic boom. Again, that facial ice plunge takes another few years of aging away, while simultaneously providing an instant hangover remedy.

Two hours of exhilaration and calorie-burning adrenaline later, I gaze out into the wide expanse of astonishing yet intimidating landscape. I feel grateful and tiny all at the same time. My mind is clear. My belly grumbling. My skin tingling and yes, like my first few scuba dives in the Caribbean, I am already imagining my next coasteering expedition. Perhaps Portugal? Scandinavia?