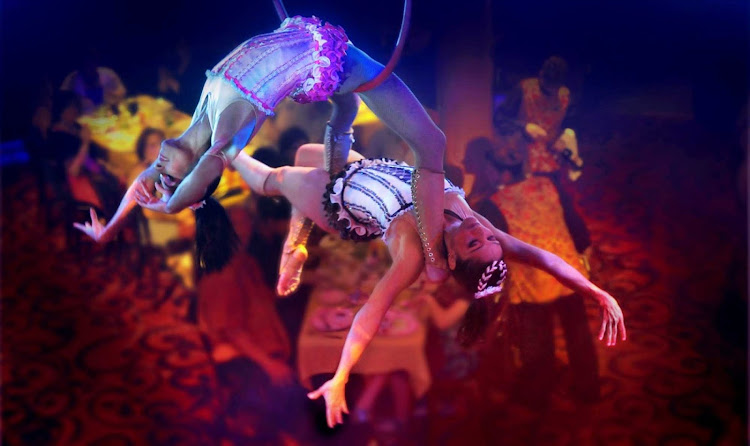 Cirque Dreams puts you inches from the action

It is when the tightrope-walking pirate almost falls right in the middle of your dinner table that you remember you’re still on a moving cruise ship. Not just any cruise ship, but Norwegian Epic, one of the biggest ships sailing the Caribbean and Mediterranean.

Of course, his apparent mishap is all part of an elaborate and choreographed scene that is one of the many jaw-dropping moments in the spectacular Cirque Dreams Epicurean production show. The feats of balance and coordination in the show seem even more impressive as the performers flawlessly execute each act while Epic cruises to your next port of call. 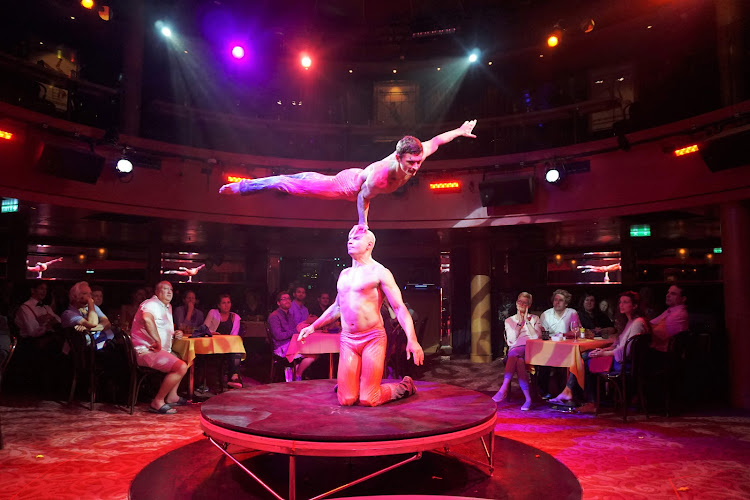 This highly entertaining show would be a crowd pleaser in a theater in any major city, but the drama is heightened when the performance takes place as the audience feels the steady sway of the ship.

This partnership between Norwegian Cruise Line and Cirque Dreams — a stage production company that has entertained more than 50 million people worldwide — began when Norwegian Epic set sail in 2010. As one of the first experiences of its kind at sea, the original dinner and theater show was an engaging experience that brought travelers closer to the action than any other venue on a cruise ship. 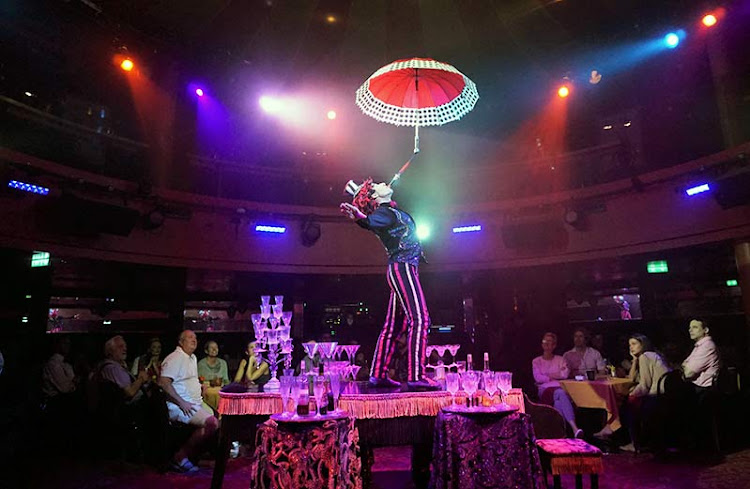 The small façade of the Spiegel Tent, home to the Cirque Dreams show, can sometimes get lost amid the other entertainment headliners. Conveniently located across from the Headliners Comedy Club and just steps from the ship’s main theater, the Spiegel, some cruisers might not even realize, may well host the best experience on the entire ship.

Unlike these other entertainment venues, the tent’s small, circular design puts the audience in the middle of the action. There is not a bad view in the house, but we recommend lining up early for your prime choice of seats. On our recent Norwegian Epic cruise, the hotel director’s staff was kind enough to reserve seats for us at a table with unobstructed views of the center circle. On the first night of the cruise, doors opened at 9 pm and we took in the 9:30 showing. 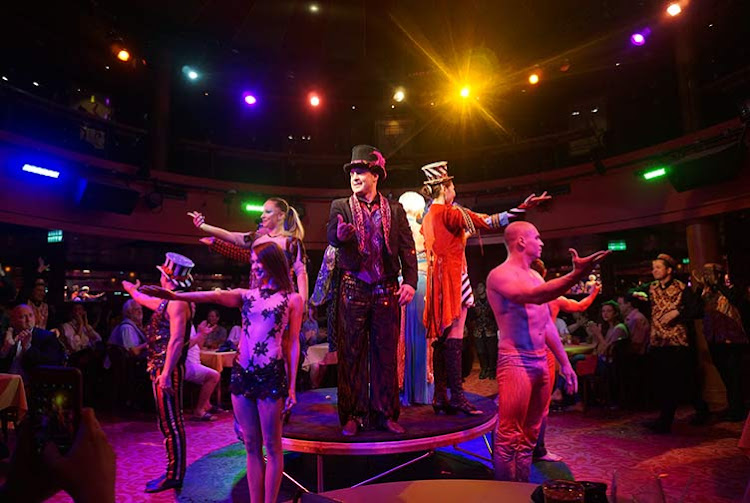 Don & Heidi Bucolo / Special to CruiseableCirque Dreams performers may come right up to your table during the show.

There's a surcharge for the Cirque Dreams show, with prices starting around $35 per person and options to include standard seating or floor seating. Cruisers with a specialty dining package can pay a smaller upcharge and exchange one meal credit for admission to the show.

While the ticket prices might sound a bit steep, the show does come with a three-course prix-fixe dinner featuring petite beef tenderloin with lemon pepper shrimp. The main course was topped off with a dessert trio that included both a red velvet cupcake and flourless chocolate cake. The venue even has two signature cocktails included in the cruise line’s Ultimate Beverage Package. 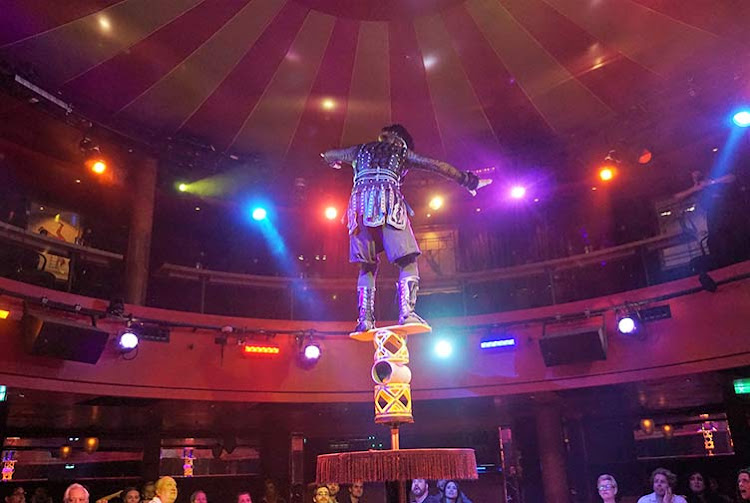 While the food is tempting, most cruisers come for the show, which begins as you enter the tent. The performers, including the master of ceremonies, make the rounds pre-show interacting with guests and posing for pictures in some over-the-top costumes. Dinner takes about 45 minutes as the hard-working staff swiftly serves each course keeping it perfectly timed. As the meal nears completion and the servers clear the final plates, the lights dim and the real show unfolds before your eyes.

Cirque Dreams Epicurean is new to Norwegian Epic as of last year, replacing the original production from 2010. While we never had the chance to see the first show, this new performance is billed as a “traditional European circus.” I can’t tell you if the show had a plot, but I can tell you it was non-stop fun. From the various juggling skits to the acrobats and strength acts, this high-energy show progressed without missing a beat.

With the circus part of the experience also running about 45 minutes, there’s never any downtime. Comedic interludes featuring volunteers from the audience were spliced in between the main acts to keep the audience entertained the entire time. 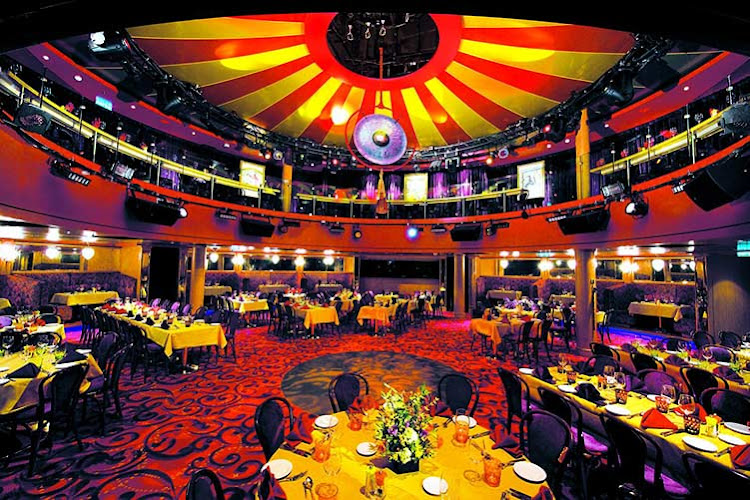 In fact, you can’t escape the whimsical performers, as you’re often just inches away from the action. You might feel the gentle mist from the male aerial acrobat as he dips in and out of a tub during one of the more sensual acts or feel as if you’re in the way of the performers as they rush in between acts to switch out props. But it’s all part of the routine — an experience that's worthy of your time and attention.

While some might criticize cruise entertainment for being uninspired or cheesy, Cirque Dreams Epicurean is just the opposite: imaginative and captivating. It certainly ranks in our top shows at sea.

If you’re sailing on Norwegian Epic or sister ships Norwegian Breakaway or Norwegian Getaway, which also feature a new Cirque Dreams production, we recommend you reserve your tickets now and get ready to be immersed in a whole new world. Just make sure you’re prepared to catch the performers if the ship’s roll and pitch propels them into your lap!

In our Entertainment at Sea series