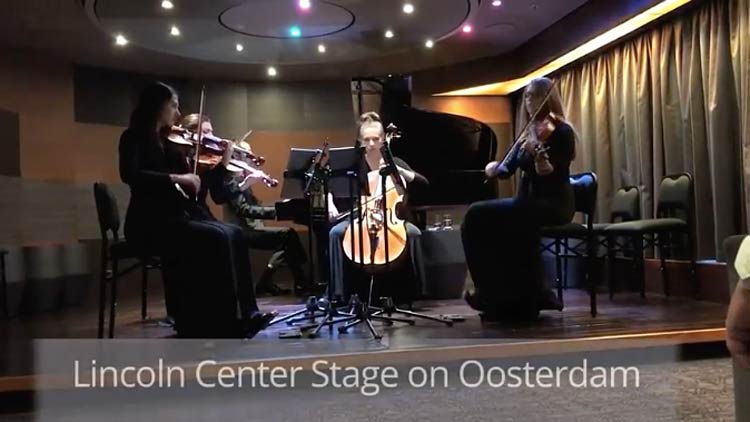 Interview with the musicians who play the classics along with Coldplay, the Police & Queen

When Holland America Line president Orlando Ashford announced the cruise line’s partnershp with Lincoln Center for the Performing Arts back in March 2015 at Seatrade, I was among those in the roomful of travel writers who were excited about the new venture, partly because I grew up in North Jersey and was able to take in the New York Philharmonic at Lincoln Center over the years.

So I was jazzed last month to see Lincoln Center Stage as one of the prominent acts on my cruise to Alaska on ms Oosterdam.

The showcase of five classically trained musicians performing chamber music during multiple daily programs debuted on Eurodam in January 2016, followed shortly by Holland America's newest ship, Koningsdam, as part of its Music Walk complex, and then on Oosterdam.

Here's my interview with three members of the quintet, Anna Vosbigian on violin, Sarah Greene on viola and Rosanna Butterfield on cello. It's 10 minutes long (with apologies to those who can't watch online videos of more than 60 seconds) and includes a couple of snippets of their performances.

I wound up attending several of their shows and captured some nice photos (coming in a Visual List next week). First-timers should know that the quintet performs 14 different programs during a weeklong cruise, including afternoon recitals on sea days. One highlight came when they were featured, alongside the house band, during "Alaska in Photos," a beautiful high-def nature short produced by BBC Earth with an accompanying classical score.

Cruisers surprised by the classical programming

‘There have been people who’ve come up to us crying because they’ve been so moved by the music.’
— Sarah Greene

"We draw in people who wouldn’t necessarily go and seek out classical music on land," Sarah says. "And it’s incredible how appreciative the audiences are and how amazed they are that this is happening on a cruise ship. It’s totally changing the way that entertainment is brought on board. There have been people who’ve come up to us crying because they’ve been so moved by the music. We see people come back every single day of the whole cruise.’’

In case you wonder how it all works behind the scenes, applicants come for a full-day audition. Then it's two months to learn a deep repertoire of music: not only the familiar classics but pop music, too, from Coldplay, the Police, Queen and Radiohead. The musicians don't get to perform together until they're on board, and then it's daily rehearsals for about a month before they settle into a groove. The gigs last 3 1/2 to 4 months — in this case, that amounted to 14 consecutive weekly cruises from Seattle to Alaska.

Rosanna and Sarah recently signed a contract to return to Oosterdam on Dec. 20 for voyages to Mexico, the Panama Canal, Hawaii, the Caribbean, Spain and Portugal.

Production note: I generally don't take my videocamera, along with all the other devices in my journalistic toolkit (Canon 5D Mark III and lenses, a Nikon camera, sometimes a drone), so I relied on my iPhone 7 for this. There's a little camera shake and no zooming, but you'll get the gist of what Lincoln Center Stage is all about. I was a little under the weather (thankfully I didn’t have norovirus!) so that's why my voice is a little hoarse in the video.

Have you been to any of the Lincoln Center Stage performances? What did you think?