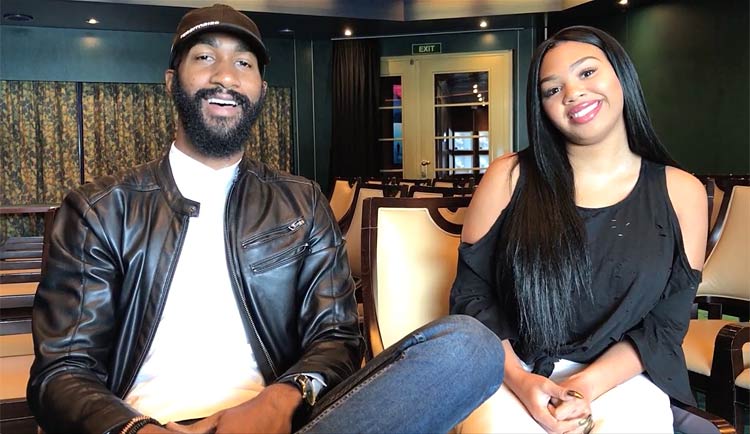 During last week's cruise to Alaska on Holland America's ms Oosterdam, a surprise highlight was the quality of the entertainment on board during most evenings, particularly the B.B. King All-Stars and the Lincoln Center Stage performers. And so I interviewed members of both groups on my iPhone 7 during the trip.

Holland America Line rolled out the B.B. King's Blues Club on Eurodam in 2013, and since then the toe-tapping grooves of Motown, R&B, blues, pop, jazz, funk and reggae can be heard on Oosterdam, Noordam, Nieuw Amsterdam, Westerdam, Zuiderdam, Eurodam, Rotterdam and Koningsdam, with live 45-minute performances three times a night for five nights a week.

Here's an eight-minute interview I conducted with the two lead singers in the band on Oosterdam, Tim Timmons and Tabitha Speight. It includes a one-minute highlight of the band's live show on the first full night of the cruise.

The concept, of course, is based on the music legendary bluesman B.B. King, but blues is only a small part of the repertoire. You'll hear familiar hits, mostly from the '60s to '80s, with an emphasis on danceable rhythms.

Each band features two vocalists backed by a drummer, bassist, guitarist, sax/clarinet player, trumpeter and organist who plays a Hammond B3

It works like this: The entertainment managers on the ships and in the home office pull together an eight-piece band for each of the ships, featuring two vocalists backed by a drummer, bassist, guitarist, sax/clarinet player, trumpeter and organist who plays a Hammond B3. Performances take place on the Live from B.B. King's stage. Most of the band members haven't played together before, but they quickly develop a rhythm — so much so that this band sounds like they could take their act on the road to any classic dance club in America.

“It’s very different from a regular band,” Timmons says. “On a ship, they put you together with other band members and say, Get with it or get lost. It really tests your professionalism.”

For Speight, her first gig at sea resulted in “a bit of a shock” at not being able to pick up her phone and call or text friends at any moment and not having ready access to the Internet. Now, she usually waits until they arrive in port to do that.

There's an upside to that, Timmons says. “I like that about the ship, it really connects you with human interaction. It takes you away from your phone and social media and makes you actually talk to other people. ... I like the fact that it’s more intimate, you get to talk to the people in the audience and get feedback from the people you’re entertaining.”

The main differences between performing on a ship and performing on land? “On land, when you go to a club, you’re going to dance," Timmons says. "Here, they want to be more entertained.” That, and the voyages become a bit repetitive during a four-month contract, the clubgoers are a bit older and the food becomes a little too familiar. But it's all good. They've both just reupped for another contract later this year.

In our Entertainment series