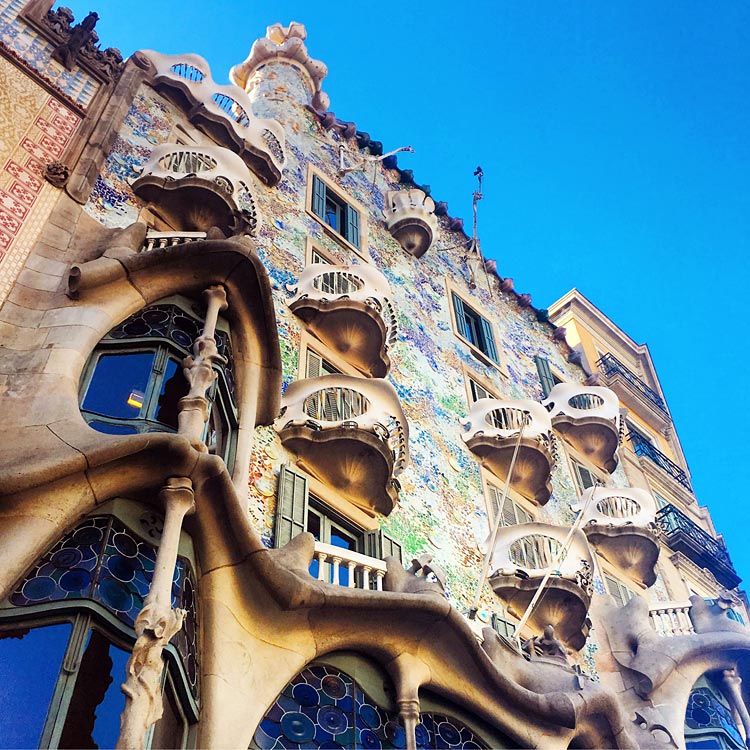 Casa Batlló, a renowned building along La Rambla in downtown Barcelona, was one of Antoni Gaudí’s masterpieces.

8 tips on fun things to do in Barcelona

Heading to Barcelona? It's the one of the most popular stops for cruise visitors in the Mediterranean, attracting more than 2.5 million cruisers each year. The cosmopolitan capital of Spain’s Catalonia region is known for its delicious food, upscale shopping, famous art and architecture.

With Gaudi’s timeless artworks scattered throughout the city, Barcelona is a must on any Mediterranean trip, so make sure to hit the major attractions and add some of the suggestions below to your checklist.

I've been here twice now and have learned my way around a bit. Whether you’re here for a weekend getaway before your cruise or you’re seeing the sights on a shore excursion, here are my 8 tips on fun things to do in Barcelona. 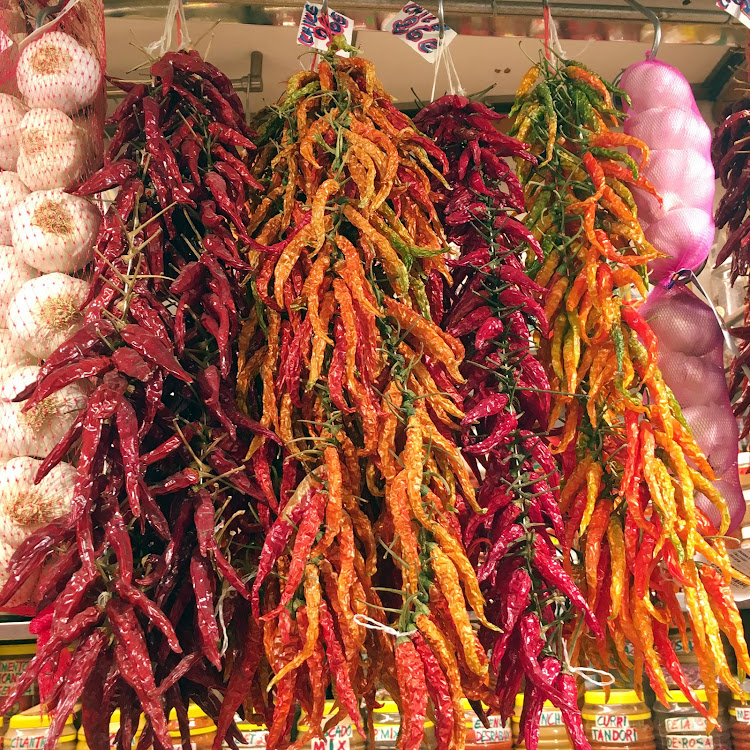 Located on La Rambla, the main boulevard, the Mercat de Sant Josep de la Boqueria — variously called La Boqueria or St. Joseph’s Market — is filled with lots of appealing food! The best subway station to access the market is Lisceu. My favorite finds were the fresh dates, manchego cheese, kiwi juice, nugget candies and pomegranate seeds. This market is the place to pick up impeccable gifts to bring home, such as Spanish seasonings, or just as a cool venue to enjoy a local lunch. There’s an abundance of fresh offerings that can be found here, and they are very reasonably priced. There are also fresh fish, meats and every other nourishment imaginable. 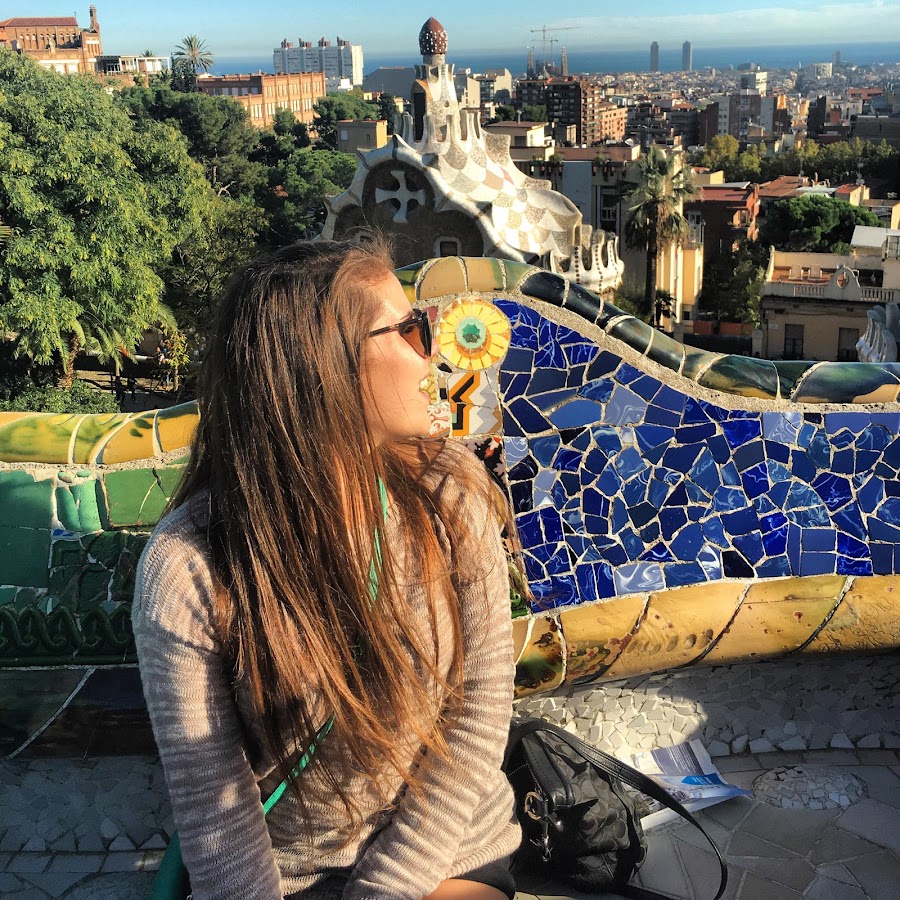 Jessica Hartmann / Special to CruiseableThat's me enjoying the scenic views in Park Güell (click to enlarge).

Park Güell (pronounced “Gwell”) is the famed park that Antoni Gaudí designed, filled with one-of-a-kind artworks. An entire afternoon could be spent here, but be sure to stop by even if you're running short on time and plan to spend at least a half hour. The cost is about 7 euros ($7.40 US), and you can buy tickets ahead of time online. The sights of the city alone are stunning from this location. The park, consisting of gardens and architectonic” elements, is located on Carmel Hill between two subway stops, Vallcarca and Lesseps, on the green line. Either stop will do but expect a long 15-minute uphill walk to the entrance of the park. You will earn your gelato after this adventure. 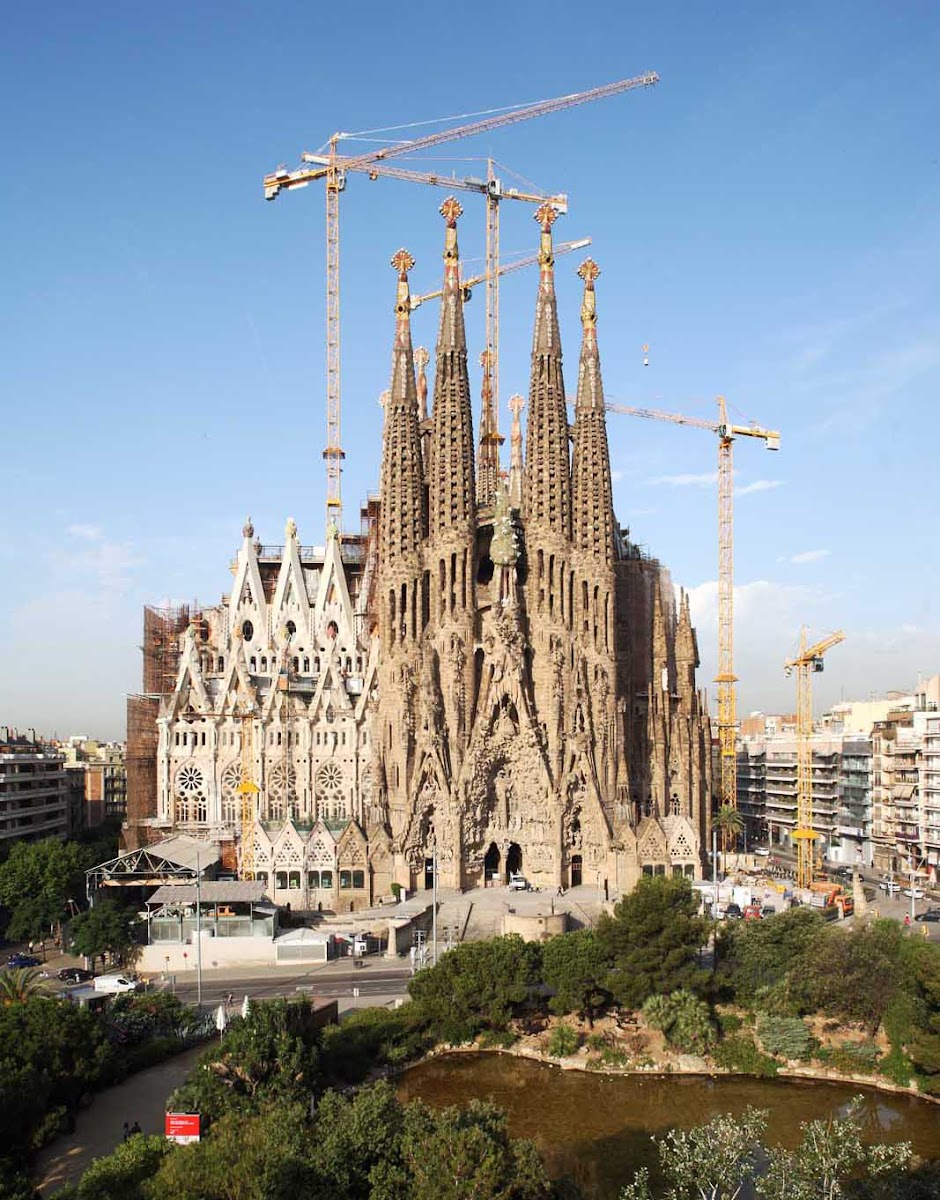 Barcelona is perhaps best known for Sagrada Família, the famous Roman Cathoic church designed by Antoni Gaudí. Construction began in 1882 and it's scheduled to be completed in 2026 (why rush a good thing?). Even though it's a work in progress, it's open for tours. The outside is breathtaking and very photogenic. The inside can be visited for a small fee, and tickets can be purchased online. If time does not allow for the full inside visit, be sure to stop and take photos of the exterior. This is the highest building in Barcelona, and its distinctive façade can be seen from miles away. 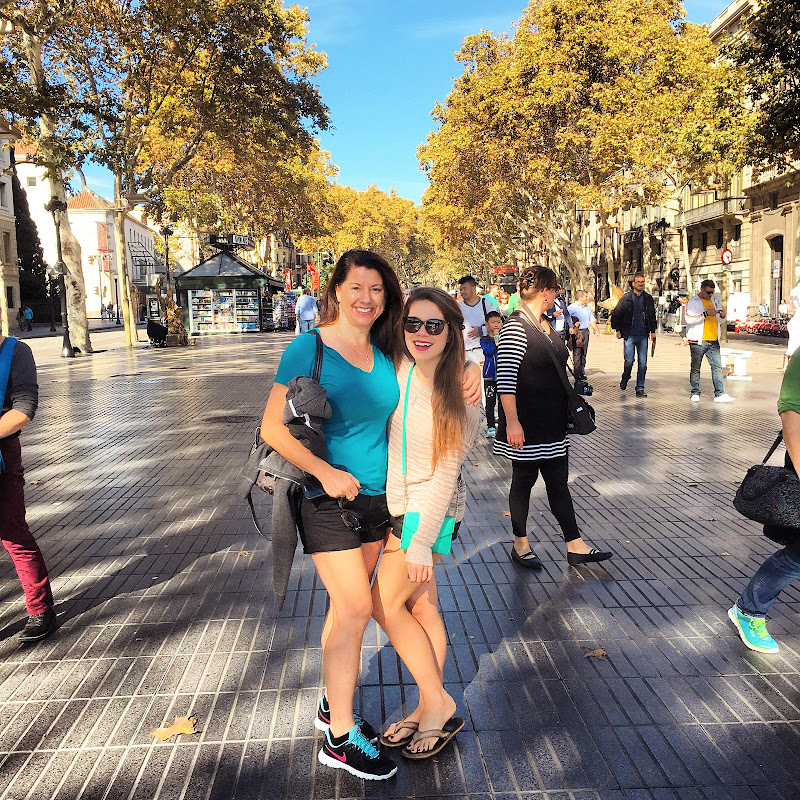 Filled with both locals and sightseers from around the world, La Rambla is one of the most recognized streets in the city. Also called Las Ramblas, this area is known as the Times Square of Barcelona. A tree-lined pedestrian mall, it stretches for three-quarters of a mile, brimming with a variety of boutique stores, gelato shops, eateries and local musicians. Yes, it's quite touristy and the best eats are found elsewhere, but you can't really say you've “done” Barcelona without wandering the walkways of La Rambla and doing the full-on people watching — it was the highlight of my trips here. While strolling the area, be sure to glance up at the different buildings. One of my favored things to do in Barcelona is finding art at the top of the buildings. Gaudí lent his artistic genius to many of the city's buildings. 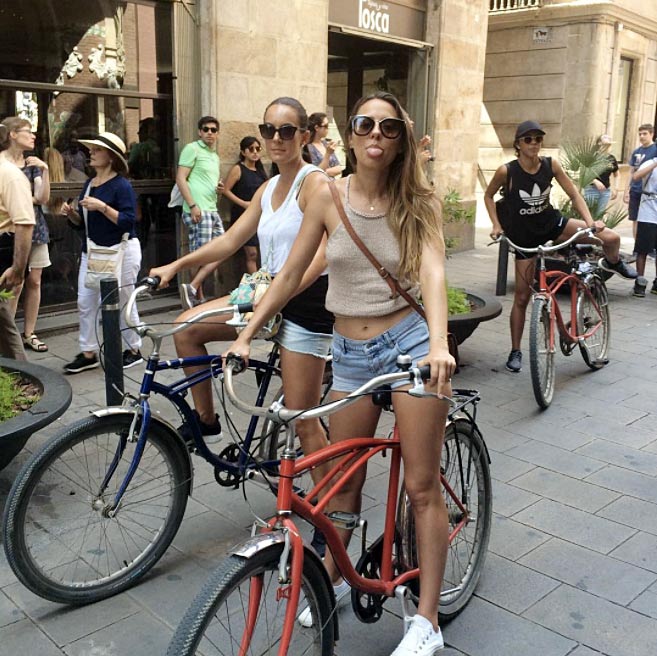 Courtesy of Fat Tire ToursLocal women with their rental bikes cruise the streets of Barcelona.

Explore the city by bike

On one of my visits to Barcelona, we spent the afternoon exploring the city by bicycle. Not only was this a fun way to work off all the scrumptious Mediterranean food I was eating, but it was also a way to take in many of the city's major landmarks. Bikes can be rented for the afternoon, though I recommend taking a guided tour. Fat Tire Bike Tour provided us enough information about each landmark we were looking at without making us feel overwhelmed. 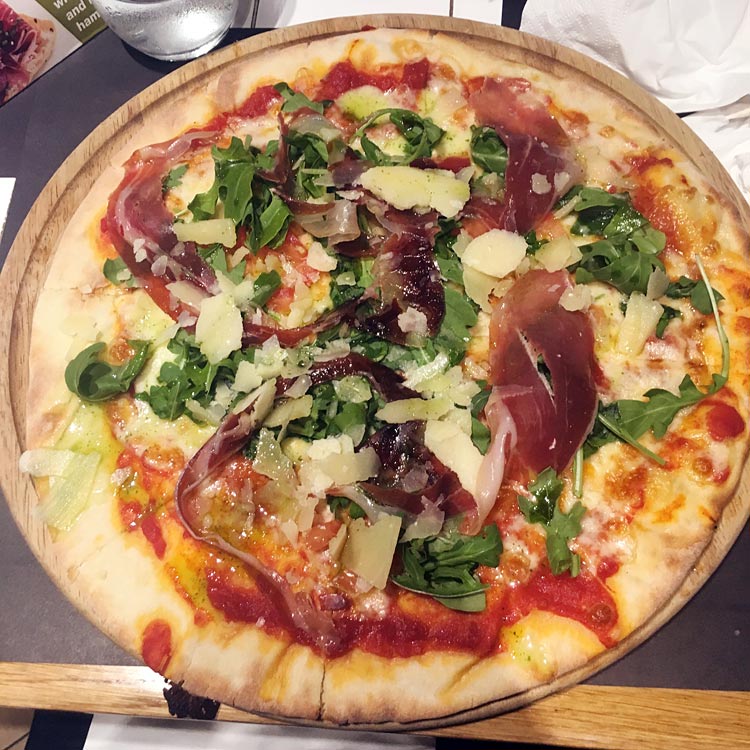 My preferred part about traveling is trying the various cultural food. Some of my favorites in Barcelona included paella (a Spanish rice mixed with seafood), pa amb tomàquet (similar to an Italian bruschetta) and Mediterranean-inspired pizza. 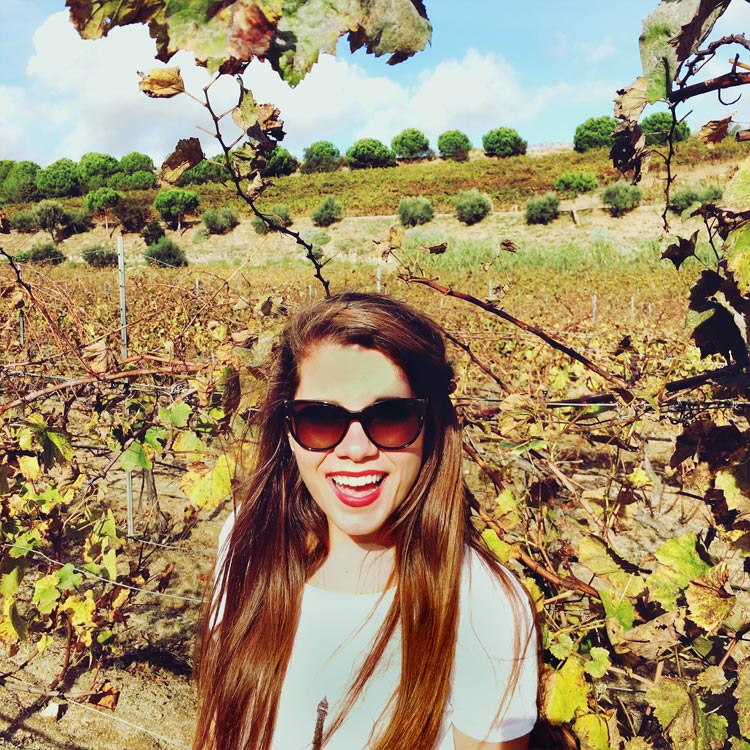 Jessica Hartmann / Special to CruiseableI set aside for an hour for a quick trip to Alta Alella Winery just outside of Barcelona.

Alta Alella Winery is a short 20 minute taxi ride from downtown. An afternoon spent here will consist of wine tasting, munching on delicious snacks to pair with the wine, and a tour of the winery, which operates out of a 19th-century estate. There are other local wineries that you can visit nearby, such as Bouquet d’Alella, Castillo Perelada, Cellers Scala Dei and Celler Can Sais. 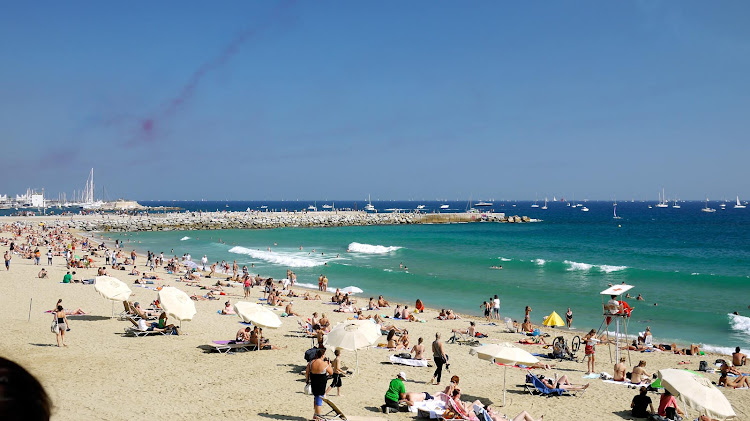 Visiting the beach is a popular activity that you can do at all times of the day. I enjoyed a scenic lunch on the sand, munching on nachos and sipping a beer. Some people enjoy visiting the nearby beaches during the evening to go to a succession of bars, with a brief stay at each. Some of the top beaches in Barcelona include La Barceloneta, Bogatell Beach, Nova Icaria Beach, Ocata Beach, Mar Bella and Sant Sebastià.

How about you? Have you been to Barcelona? What were a couple of highlights?