St. Thomas travel guide: What to do & see

Be prepared for some hustle-bustle when you visit this busiest of the U.S. Virgin Islands — it's the largest by population, second largest by area. More cruise ships call at the pretty Charlotte Amalie than at any other Caribbean port.

The largely mountainous, 32-square-mile island isn’t all about consumerism, however. The views from on high are magnificent, the local culture is engrossing and beaches such as Magen’s Bay are beauty spots that rival any in the world.

As they say on the island, “ev’ry-ting good!”

Note: St. Thomas was severely hit by both Hurricane Irma and Hurricane Maria in September 2017. The island has rebounded, and the New York Times reported on Nov. 25, 2018: “Cruise ship arrivals are back to pre-hurricane levels, all beaches are open and nearly all restaurants are back in business.”

Top things to do & see on St. Thomas

Most ships arrive early in the morning and pull out before dinner, so plan on five to eight hours on shore.

An overwhelming selection of boutiques and jewelry stores line the streets of downtown Charlotte Amalie, some of them open only when cruise ships are in port. Warehouses on Main Street once stuffed with pirate booty today offer a wide variety of souvenirs. For a more subdued atmosphere, get away from the crowded city center and check out relaxing shopping spots like Tillett Gardens, an attractive, village-like collection of open-air galleries and low-key restaurants and services.

U.S. residents enjoy a $1,600 duty-free allowance, twice that of other islands.

The island’s history goes way back, and while it’s not all pretty, it’s undeniably interesting. Landmark sites include Emancipation Park, Government House, Hotel 1829, 99 Steps and St. Thomas Synagogue. Fort Christian, dating from 1672, formerly housed a museum but has been closed for years for renovation. The Blackbeard’s Castle walking tour, $10, includes five historic homes with period furnishings, botanical gardens and a 17th-century Danish watchtower.

If the weather is clear, take the Paradise Point Skyride to a hilltop for sweeping views and multiple entertainment options. Guided island tours provide more variety, or you can rent a car and head out on your own. Crown Mountain Road is reputed to be the most scenic in the USVI, but watch it on the hairpin turns, which can be extra-scary when driving on the left side of the road, as is the custom here. Don’t miss a stop at Mountain Top, one of the highest points on the island, or taking a dip at Magen’s Bay, touted as one of the most beautiful strands in the world.

Sail, snorkel and sightsee on sailing tours offered by High Pockets, New Horizons or other yacht-charter companies. Kayaking or snorkeling more up your alley? Spend a day with Virgin Islands Ecotours and you’ll do both, with a little hiking in the bargain. Certified scuba-divers hit pay dirt in St. Thomas with wreck dives plus colorful fish and corals at sites such as Cow and Calf Rocks. Or, try Snuba, a cross between snorkeling and scuba diving. 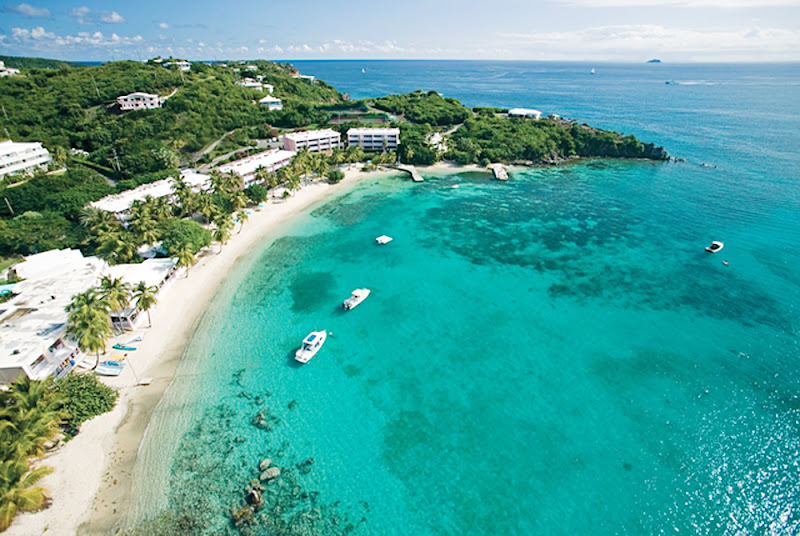 The island is ringed by more than 40 strands, most of them within five miles of Charlotte Amalie. Magen’s Bay is an often-crowded family favorite with lots of commercial activity, while Little Magen’s, accessed via a well-worn trail, is a clothing optional beach popular with the gay crowd. Coki Point, Secret Harbour, Brewer’s Bay, Morning Star, Hull Bay and Lindquist Beach are other popular beaches. If snorkeling is your goal, ask locally before heading out as not all beaches are optimal for that activity.

A short ferry ride leads to beautiful Water Island, a residential dollop of land (just 50 acres) where savvy visitors come to swim, snorkel, eat and relax at gorgeous Honeymoon Bay. St. John, another of the U.S. Virgin Islands, is also a ferry ride away, with boats leaving from Charlotte Amalie or, more frequently, from Red Hook on the island’s east end. Gorgeous Trunk Bay is the main destination for day-trippers, but an island tour or a day spent at Cinnamon Bay  also can be rewarding. They’re both part of little-known Virgin Islands National Park, a full sister to Yosemite and Yellowstone.

Coral World, an ocean park with indoor and outdoor exhibits, offers a great educational experience for all ages. Marine gardens, a stingray lagoon, touch pools and an underwater observation tower are included in the price of admission. For a premium, you or your kids can get in the water with sea lions, turtles and even baby sharks. A Nautilus semi-sub goes under the surface for close-up marine life views. Another option is donning Jules Verne-looking helmets for a Sea Trek “hike” on the ocean floor.

If you’re young and fearless, give life to your James Bond fantasies and try flyboarding, a new sport in which participants don special boots and lock into a platform equipped with a “jet pack” that shoots them as high as 30 feet in the air. Old and fearless? Ondeck Ocean Racing offers seasonal opportunities to join the crew of high-tech racing yacht for a wet and wild ride. 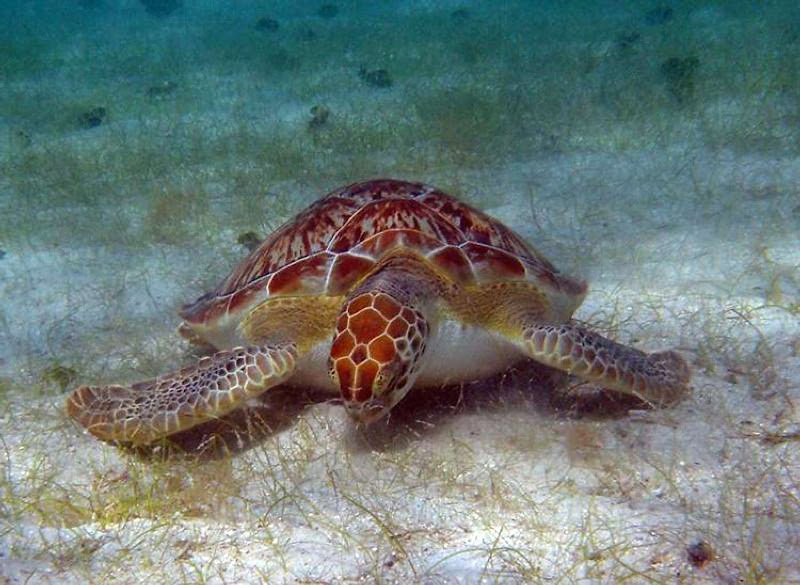 To satisfy pasta-loving locals and tourists, Romano’s Restaurant, an ocean-view establishment near Coral World on the North, is owned by New Jersey chef Tony Romano and specializes in house favorites such as four-cheese lasagna, osso buco and house-made desserts. The fish sandwiches at The Greenhouse are a less expensive lunch alternative, while Cuzzin's, Amalia Cafe and Gladys' are good spots to sample traditional West Indian fare. Close to Magen’s Bay, the Udder Delight Dairy Bar is famous for its liquor-spiked milkshakes.

In winter, most ships dock at Havensight Pier or the newer Crown Bay, each about a 10-minute taxi, bus or shuttle ride to downtown Charlotte Amalie. Only six ships can be accommodated at these two ports, so if more are scheduled to call on the same day, they anchor in the harbor and tender passengers to shore.

Nearly all taxis are passenger-share “safaris,” either enclosed or open sided. They charge flat fares that can vary depending on how the driver sizes you up. If the fare seems too high, try to negotiate. You’ll pay a set price per person. From Havensight to town it's $5 per person; from Crown Bay to Charlotte Amalie it's $4. Another option is a rental car, which you can pick up at the port or hire in town.

Dress: Dress is casual throughout St. Thomas, but cover up when you’re sightseeing or shopping in town; bare chests and bathing-suit tops are frowned upon.

Traffic: Look to your left! Traffic in St. Thomas drives on the left side of the road, so be careful when crossing the street or renting vehicles.

Store hours: Stores on Main Street in Charlotte Amalie are open weekdays and Saturday from 9 am to 5 pm. The hours of the shops in the Havensight Mall (next to the cruise ship dock) are the same, though occasionally some stay open later if there are a few cruise ships at the dock. You may also find some shops open on Sunday if a lot of cruise ships are in port.

Tipping: At restaurants it's customary to leave bartenders and waiters a 10% to 15% tip, but always check your bill to see whether service is included. Taxi drivers expect a 15% tip, but only for private taxis.

Language: English, though you’ll also hear many others tongues spoken in this cosmopolitan port.

Safety: The island may seem like a paradise, but the crime rate is comparable to many large cities. Drug and other related crime can be a problem, but in general tourist areas are considered safe. As always, be aware of your surroundings and lock up your valuables.

How about you? Have you been to St. Thomas or the Virgin Islands? Planning to go? I'd love to hear about your experience or see your photos!

“St. Thomas has a lot more to recommend it than mere convenience. Garishly lush at times, with fat sugary beaches that split its steep green slopes from the surrounding expanse of blue ocean glow, the island also has an authentic urban core, with first-rate restaurants, upscale shops (forget the ones mobbed by day-tripping cruise passengers) and quirky bars lining its historic streets.”

“Jost Van Dyke is a spit of land largely defined by what it lacks: no stoplights, no chain stores, no hustle. They still don't have reliable round-the-clock power. Where the white-sand beach ends, the open-air bars begin.”

“Visit Yacht Haven Grande, a posh marina with upscale restaurants and high-end shops filled with designer labels. You can wind your way through this shopping mecca on beautiful boardwalks and landscaped paths along the water's edge.”