Montego Bay port guide: What to do & see

The second largest city in Jamaica, Montego Bay (or MoBay, as the locals call it) is known for its many resorts and famed beaches — and, perhaps less notably, for the Bobby Bloom song Montego Bay. The name “Montego Bay” is believed to have originated as a variation on the Spanish word manteca, which means lard. Indeed, for hundreds of years Montego Bay was known as a trade center specializing in lard, leather and beef.

Today's visitors will find Montego Bay to be fully developed, catering to international tourists. Remnants of old sugar-cane plantations and mill-works are still standing, and while most visitors tend to flock to the idyllic beaches with their palm-framed turquoise waters, many also enjoy the city's rich cultural history.

As the tourism capital of Jamaica, this city is a pleasant balance of laid-back, breezy island atmosphere and a pumped-up nightlife and reggae music scene.

Running parallel to the beach, Gloucester Avenue, or the “Hip Strip,” is home to some of the best waterfront dining spots in Jamaica, serving Caribbean and international cuisine. Here you'll also find attractions and entertainment options that include reggae clubs, Rastafarian art galleries, gaming lounges and duty-free shopping.

Beyond Gloucester Avenue is the downtown section of Montego Bay. Though most tourists don’t bother to venture beyond the strip, downtown is the essence of the city. The maze of pot-holed streets and avenues are littered with eager pushcart peddlers and competing storefronts that fuel the everyday Jamaica not found in colorful resort brochures. Downtown attractions include Sam Sharpe Square, which is crowded with pedestrians, brightly painted old Gregorian buildings and the Museum of St. James, which bears witness to the tragic slave history of the city.

In addition to postcard-worthy beaches, Montego Bay offers miles of coral reef and the vast Montego Bay Marine Park, which can be explored and admired while snorkeling or partaking in the many available water sports.

Montego Bay may be most known for its beaches and laid-back vibe, but it's also chock-full of family-friendly resorts with all-inclusive pricing — not to mention a plethora of kid-friendly activities. For example, kids stay and eat for free at Half Moon, where families will also find a children's village, kiddie pool and mini golf course. Kids will also love the Sunset Beach Resort, Spa & Waterpark, complete with waterslides and a pool for each age group.

Yolo (you only live once!)

Once you've taken in the views and filled your extra suitcase with all the duty-free treasures you can find, take time to have an adventure with John's Hall Montego Bay Adventure Tours. Half-day tours from this company take you away from the tourist attractions and into the mountainous countryside where you can get true local flavor.

Or, if you're seeking a different kind of thrill, view the water from a new perspective with Kiteboarding Jamaica. This company offers three levels of lessons (discover, intermediate and independent) as well as equipment rentals. 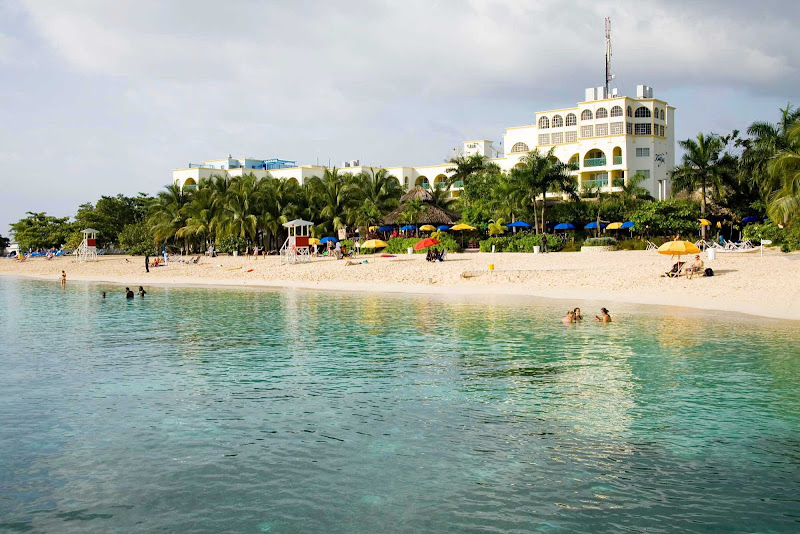 Jim Smith / Jamaica Tourist BoardThe scene along Doctor's Cave Beach Club in Montego Bay, one of Jamaica's most famous beaches for nearly a century. It's known for its crystal-clear turquoise waters and white sands.

Jamaican cuisine is a fusion of Spanish, British and Afro-centric influences. The most popular style of cooking native to the country is called jerk — a spicy and smoky seasoning on barbequed meats such as chicken, pork and beef. Some of the best jerk dishes can be found at places such as the Pork Pit overlooking the waterfront, and Belfield 1974 at the Barnett Estate downtown. For a fine dining experience offering a romantic atmosphere and Caribbean cuisine, check out Sugar Mill Restaurant. Dine by candlelight or on the terrace and enjoy classic dishes such as pumpkin soup, smoked marlin and curry chicken. For a panoramic view of the bay and some of the freshest seafood in town, grab a table at the open-air restaurant Pier One on Howard Cooke Boulevard.

Montego Bay’s tropical climate is most appealing during the dry season from mid-December to mid-April. This is considered the best time to go as it avoids the intensely humid summer months and rainy autumn season when hurricanes are known to blast through. The peak season of winter to early spring brings in the highest volume of tourists, which in turn can raise prices on accommodations and attractions. That said, there isn’t a truly bad time to visit this island city, as the beautiful beaches and friendly, easygoing attitude of the locals are present year-round.

Cruise ships dock a few miles outside of Montego Bay at the Montego Freeport port. There are basic facilities provided at the port, but most people prefer to travel into the city of Montego Bay as the shopping and facilities are much nicer. It’s about a five-minute taxi ride into Montego Bay for a $5 fixed rate.

Taxis line up where you exit the terminal building, and all of the taxis arriving there are licensed by the Jamaica Tourist Board. For safety, it’s always recommended to take a taxi from either the Jamaica Union of Travelers Association, Jamaica Cooperative of Automobile and Limousine Tours or Maxi Taxi. Fares are set and rates are listed in the terminal for all popular destinations. Fares are charged per passenger; make sure you negotiate a price before you get in.

Documents: A passport is required for travel to/from Montego Bay.

Language: The official language is English.

Currency: While you are welcome to use a Cambio upon arrival to exchange your money to the local Jamaican dollar, almost all hotels, restaurants and shops in the tourist areas accept the U.S. dollar.

Store hours: Most stores are open Monday to Saturday, 9 am to 5 pm and closed on Sunday. Some stores in the cruise terminal may stay open on Sunday.

Safety: While Montego Bay is a relatively safe city, normal precautions should be observed. Stay in groups, and stick to tourist areas. Most locations in close proximity to the resorts are safe; rural areas can be especially dangerous.

Jamaicans are very friendly people. In touristy areas though, be aware that many people who welcome you, ask you where you're from and offer advice are looking for money.

Have you been to Montego Bay? Please share a story, tip or discovery. What was the highlight?

“Outside the all-incs and beyond the overpriced tchotchkes on Gloucester Avenue is Doctor's Cave Beach, the best nonresort option for a day at the beach. Six bucks and one step inside the beach club later, it's like being a private island. Traveler Beware: That $6 just mentioned is needed to get onto the beach itself, not just into the club, so bring cash.”

“If farm-to-table is more your speed, the biweekly dinners at the Round Hill hotel are a parade of Jamaican produce sourced right from the garden — don't miss the Scotch bonnet pepper ice cream.”