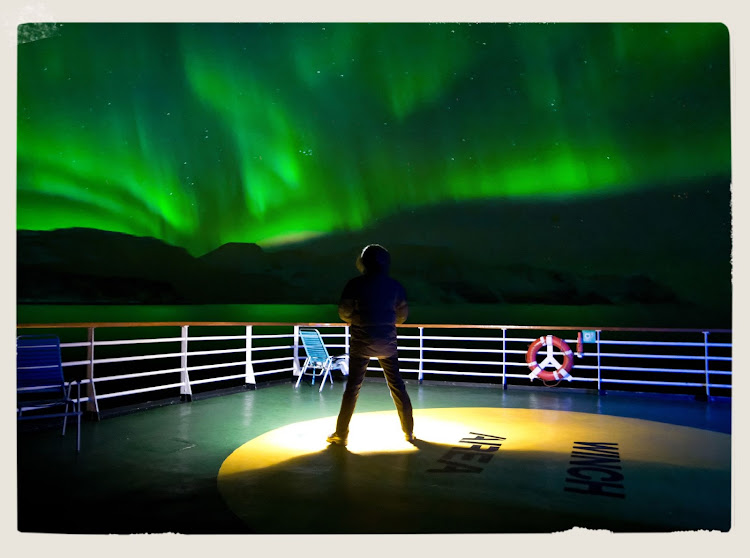 The Northern Lights put on a majestic display for guests aboard Hurtigruten’s Vesteralen during a cruise along Norway’s coast from Bergen to Kirkenes.

Tips for photographing the Northern Lights

“Forget your smartphone's camera, which doesn't have a sensitive enough sensor for night photography and, in any case, will shutdown in the likely freezing temperatures of winter,” says Carter.

What should you bring? A DSLR camera and a tripod bring about the best results.

Another tip: Use your camera to help you determine if you are seeing the Northern Lights.

“Your camera is much more sensitive than your eyes, so if you think you see a diffuse grey-green glow on the northern horizon — known as the “forest fire” — but you're unsure, take an image with your camera to check,” says Carter.

When composing the shot, Carter also advises photogs to use a wide-angle lens and capture the foreground.

“You need foreground. Sure, point your camera — fitted with absolutely any lens — up at the sky and you'll get some Northern Lights. However, only a wide-angle will get you an image that isn't just some green in the sky,” Carter notes.

Here is how to get the right exposure:

“With the white balance on automatic, the focus manually fixed at infinity (if the lens slips, tape it down) and the ISO set to between 800 and 1600 (or even higher if there's no moon), try exposure times of between four and 25 seconds,” suggests Carter.