If you have future cruises booked on Prinsendam, they will be honored until July 1, 2019; after that date, her itineraries will be taken over by Rotterdam, Volendam and Veendam. Holland America Line is reaching out to booked guests and their travel professionals to switch over guests to one of HAL’s other ships.

“Prinsendam has proudly served our guests since 2002, and we share in the fondness that many of our loyal cruisers have for this special ship,” Orlando Ashford, president of Holland America Line, said in a statement.“

“As we look to the future and focus on delivering the programming and innovations that our guests are asking for, we remain focused on exceeding guest expectations on every cruise and will continue to offer the unique itineraries that Prinsendam sailed on our other smaller ships.”

Phoenix Reisen is a Germany-based travel agency that also operates a fleet of cruise ships and first began operating cruises under its own brand in 1988.

Oriana will sail out of the P&O Cruises fleet 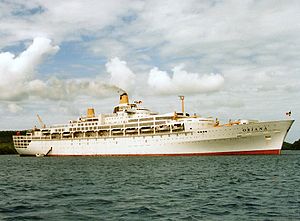 Meantime, P&O Cruises announced that its ship Oriana, built in 1995, will leave its fleet in August 2019. The company did not specify where the 1,822-guest ship would operate next.

The cruise line’s senior vice president, Paul Ludlow, said “Oriana is an original and a much loved P&O Cruises ship. While we will miss her, her departure will allow us to focus on our remaining mid-size and larger ships as the fleet expands with Iona,” a new ship arriving in 2020.

Both Prinsendam and Oriana sailed under the aegis of Carnival Corp., of which Holland America and P&O are subsidiaries.