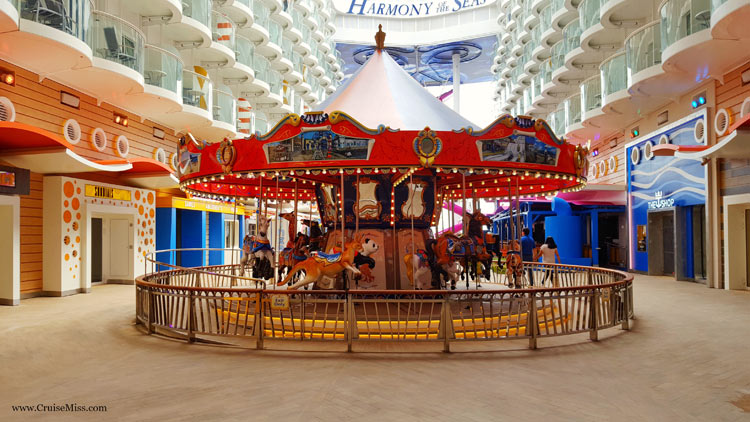 The colorful, handcrafted Carousel in the Boardwalk neighborhood of Harmony of the Seas.

Taking Harmony of the Seas through its paces

An early sailing on the world's largest cruise ship

I recently spent two nights aboard Harmony of the Seas — the world’s biggest cruise ship and the fastest ship within the Royal Caribbean fleet — and what an experience it was! Although two nights wasn’t quite enough time to see and do absolutely everything, it definitely allowed more than enough time for one to delve into the onboard adventure just long enough to be left with the need to want more.

Check-in was as swift as it always is with Royal Caribbean — they probably have the best check-in system of all cruise lines — and in fewer than 15 minutes I was checked in, on board and heading for my cabin. My onboard accommodation was exactly the same as it was on Anthem of the Seas and Ovation of the Seas: a balcony cabin with an identical layout and of a similar size. 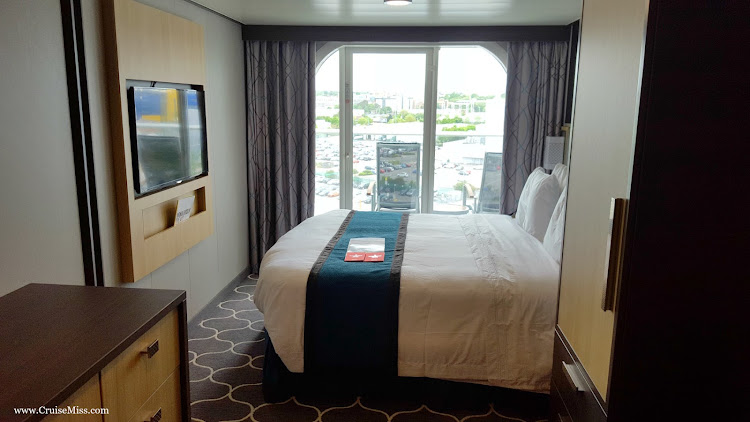 Danielle Fear / Special to CruiseableMy balcony cabin on Harmony of the Seas.

I didn’t stay in the cabin long, I just dropped my bags and then made my way out again as I was desperate to explore. One of my first stops was the Boardwalk on deck 7 and I think that was my favorite of all the neighborhoods on board. As soon as you stepped through the door, you were greeted by the sight of a traditional carousel, exactly what you would expect to find on a boardwalk from yesteryear and something that brings out the inner child in us all – who doesn’t love a fairground carousel?!

Beyond this was The Dog House, Johnny Rockets, Aqua Theater, the exit for Ultimate Abyss, Sundials, The Crown and Anchor Shop and a tequila bar. The sun was shining and there was an all-round good vibe! It was also lunchtime, so a visit to Johnny Rockets was obligatory. I ordered my favorites: cherry sprite, onion rings and a hot dog with onions. 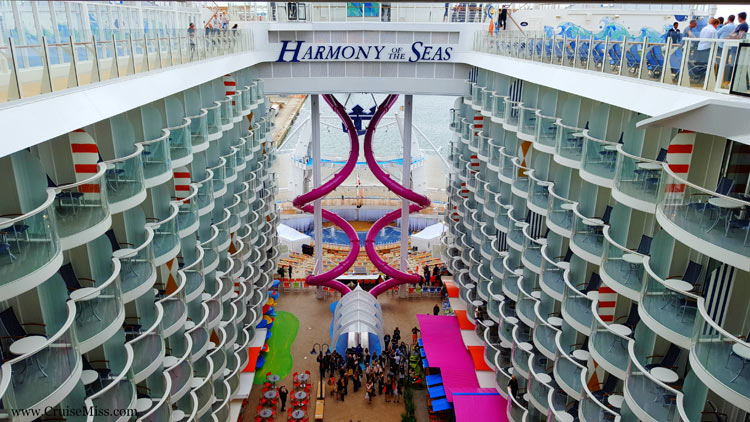 Danielle Fear / Special to CruiseableA view of Central Park on Harmony of the Seas.

Next, I made my way to the Royal Promenade and Central Park. On The Royal Promenade you will find the Bionic Bar, Guest Services, a Kate Spade shop, Boot and Bonnet Pub, Rising Tide Bar (although it’s not always there as it moves between three decks!), Sorrento’s, Cafe Promenade and more. I really liked this space and it was also where they had the ’90s dance party on the last night – that brought back some musical memories! It was a hive of activity both day and night and that’s one of the things I really liked about Harmony. So much was available throughout the ship, as opposed to everything being confined to what felt like one area, so the atmosphere throughout was electric – even the open deck on 15 was buzzing, yet it was cold and windy! 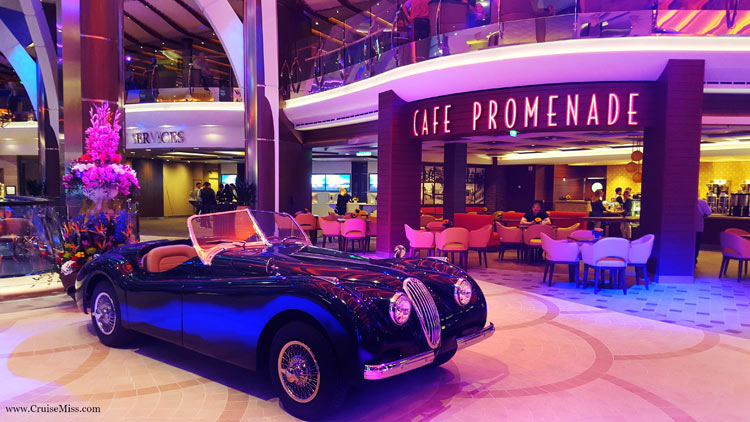 Danielle Fear / Special to CruiseableThe Royal Promenade on Harmony of the Seas.

Central Park was an entirely new experience for me and I absolutely loved it. A park full of plants and trees growing right in the middle of a cruise ship. It had a swanky, posh neighbourhood feel to it – like something you’d find in an upmarket area of the suburbs – and I’d imagine that on a warm, sunny day it would be a wonderful place to sit and relax and enjoy the smells of all the greenery. If I were onboard for longer, then this would definitely be the place that I would go in order to have some peace and quiet away from the activities on the other decks. The only thing it was missing (for me personally) was the sound of singing birds, but then I suppose not everyone appreciates a chorus from a thrush first thing in the morning! 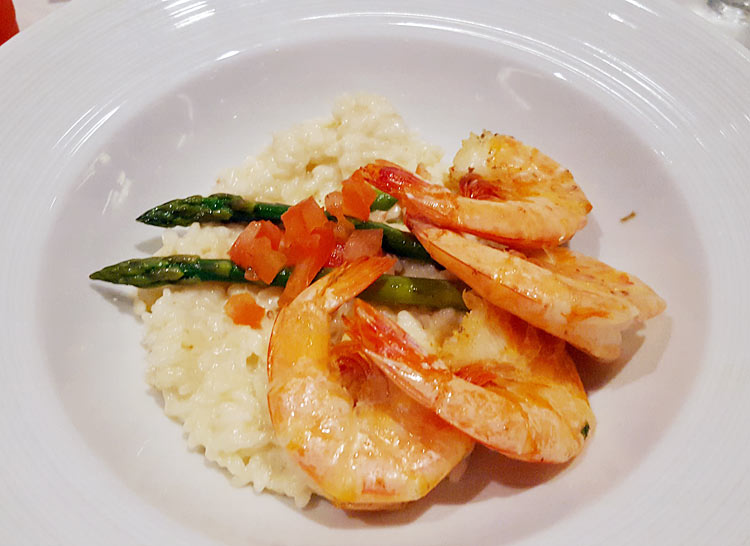 Dining on Harmony of the Seas

Dinner that evening would be in Jamie’s Italian and the menu choice, restaurant décor, service and its location in Central Park made for the most interesting cruise ship dining experience that I think I have ever had. It was incredible. There I was, sitting in a restaurant on a cruise ship, but I was looking out at a beautiful park. I really did enjoy it and that was before I’d tried the food! I ordered the crispy squid to start and followed it with an 8-ounce rib-eye steak. Both dishes were absolutely delicious and as full as I was, I still made room for a chocolate brownie and ice cream. Chops Grille, 150 Central Park and Vintages Wine Bar were also located in Central Park, along with the Rising Tide Bar (which moves between here and the Royal Promenade every 15 minutes) and a few high-end stores such as Bulgari.

My second day on board was absolutely jam packed with different immersion sessions, the first one being a stop in the Engine Control Room and then a look at the waste management system. Both were incredibly interesting, but my bridge visit later in the day was what really done it for me! I do love a bridge visit and I have to say this was the first time that I’d stood on the port side bridge wing and not been able to see the starboard side – it was incredible!

I also had a brief galley tour during my immersion sessions, which was interesting. Harmony of the Seas has galleys on decks 3, 4 and 5, with the one on deck 4 being the biggest to accommodate the pastry section, but in all, she has 24 separate galleys across 18 food outlets. There are 1,056 food and beverage crew members: 249 culinary staff, 532 restaurant staff, 184 beverage staff and 91 galley stewards. Together, they churn out 80,000 meals a day!

On my last evening I dined in the ship's main restaurant on deck 4 (it’s actually split between 3 decks, each with its own unique décor and menu options) and this too was a most pleasant gastronomy experience. There were lots of delicious menu offerings and it was hard to decide, but finally I ordered the shrimp cocktail to start and followed it with a crab meat and truffle risotto with shrimp. The service was swift and the lady offering bread was very attentive, I don’t think I’ve been offered so much bread in one sitting before! 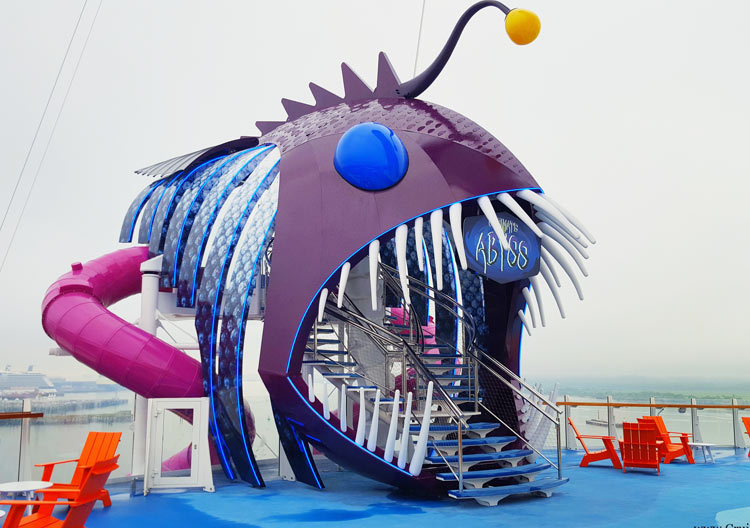 Danielle Fear / Special to CruiseableThe Ultimate Abyss slides on Harmony of the Seas.

I was completely blown away by Harmony of the Seas. I’d been waiting a long time to experience Oasis-class and Harmony certainly delivered. Harmony almost leaves the feel of cruise ship behind, she is so big (and by big I mean colossal) that it’s incredibly easy to forget that you are actually on a cruise ship. Several times, my friend and I both said that we felt more like we were in a resort somewhere and not on a ship.

If a cruise with fun, family and a never ending supply of adrenaline fueled experiences is what you have in mind, then she is without doubt an ideal choice. One could never be bored during their time on her, that’s for sure. If, however, you long for those sea days where you can relax on the open deck in peace, or find a spot somewhere inside and have some quiet time, then she is not your choice. The only places I found that were relatively quiet were Central Park and the Solarium, there was music playing or something of some description going on in just about every other area onboard.

What did I miss? Well, unfortunately, I didn’t get a chance to try out the Ultimate Abyss (I had planned on doing this on day 2, but rain kept the slide closed for the majority of it), but I am assured that it is a thrill to experience! Instead, I completed all levels on the Jurassic Park game in the arcade on Deck 15 – what? My friend and I had an hour to kill and it was fun!